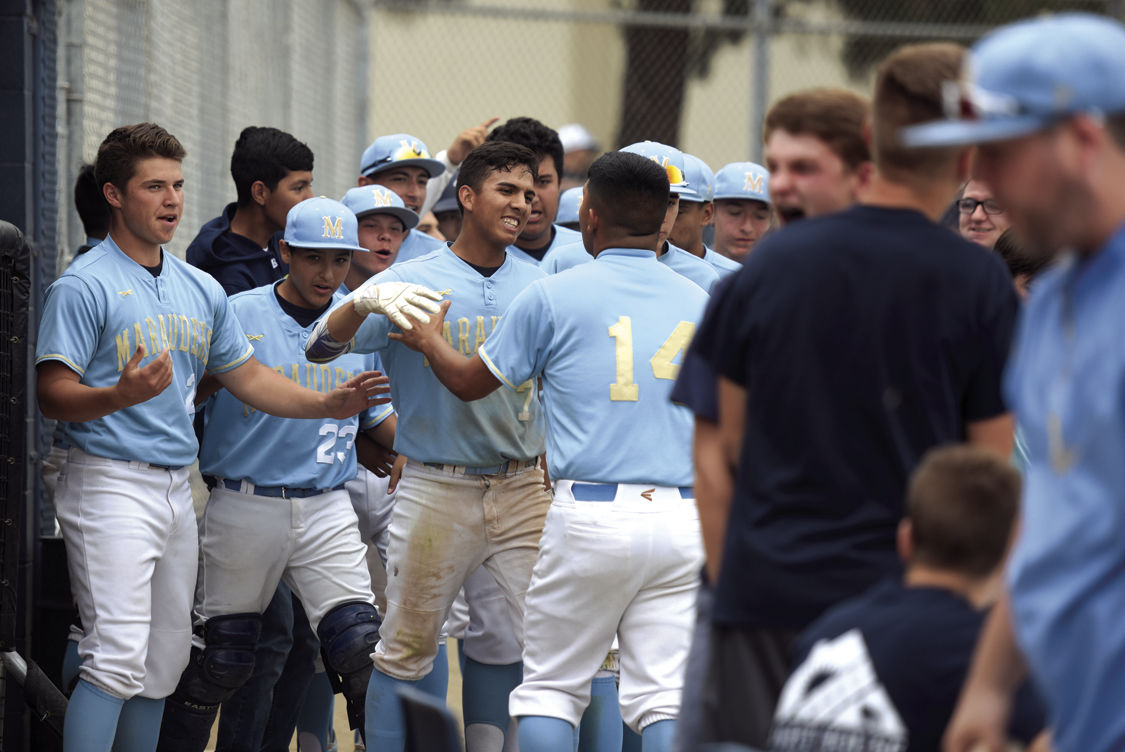 Monache High School's Alexza Sandoval gets love from the Marauders' dugout after scoring during a CIF Central Section Division IV semifinal game against Bakersfield Christian, Wednesday, May 15, 2019, at Monache. 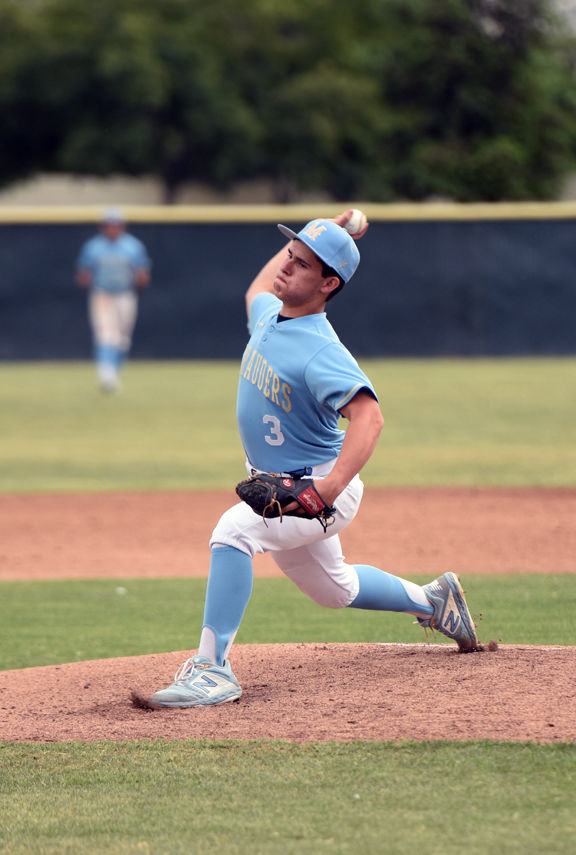 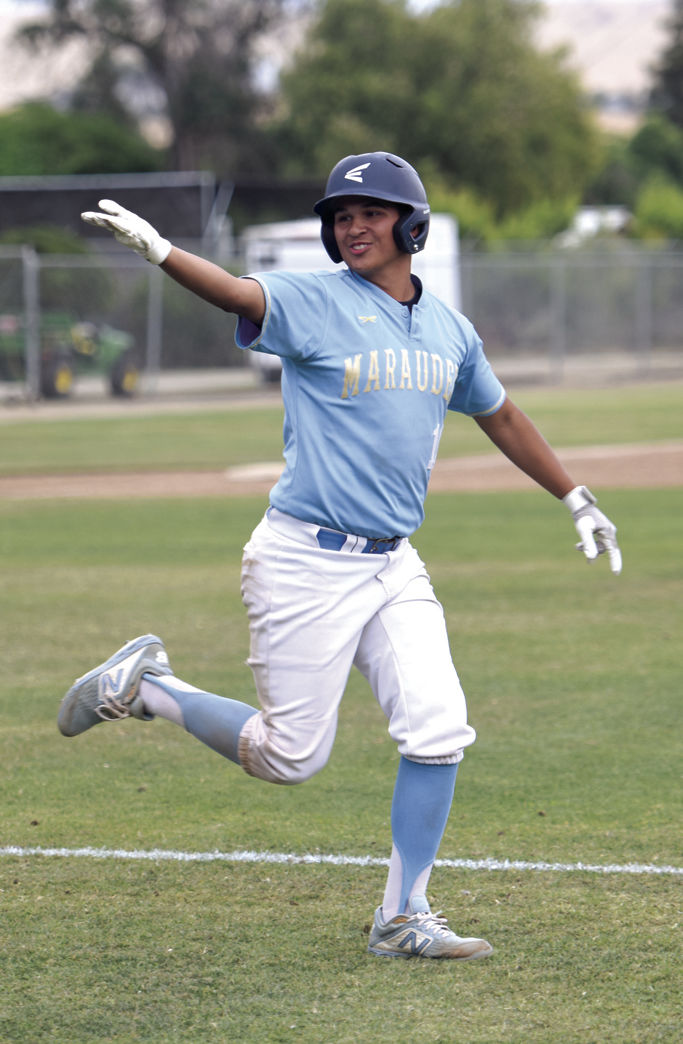 Monache High School's Aaron Hernandez blows a kiss to the Marauders' dugout after being walked during a CIF Central Section Division IV semifinal game against Bakersfield Christian, Wednesday, May 15, 2019, at Monache. 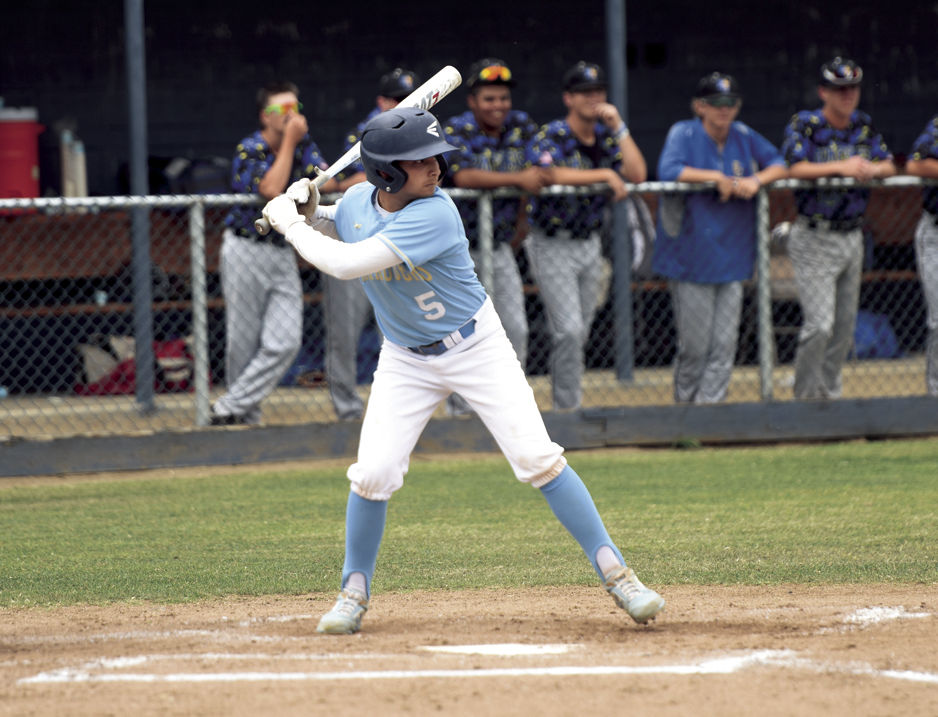 Monache High School's Alexza Sandoval gets love from the Marauders' dugout after scoring during a CIF Central Section Division IV semifinal game against Bakersfield Christian, Wednesday, May 15, 2019, at Monache.

Monache High School's Aaron Hernandez blows a kiss to the Marauders' dugout after being walked during a CIF Central Section Division IV semifinal game against Bakersfield Christian, Wednesday, May 15, 2019, at Monache.

On Saturday morning, the Monache High School baseball team has a chance to do something special — win the school’s first baseball Valley title in nearly three decades.

But if you let MHS head coach, A.J. Watts tell it, the Valley championship is just another game.

Watts has emphasized since the beginning of the season that every game is just another, regular game so that if and when the team reached their first playoffs since 2010 they would be prepared for the playoff stage. But sometimes that’s easier said than done.

“In all honesty I’m going to say no,” senior pitcher Ricky Alba said at practice Thursday. “I haven’t been nervous in a long time for games and these past two games, this is the first time I’ve been nervous on the mound in awhile. And it’s been a different feeling.”

Alba pitched a complete game and allowed just two hits in the team’s 11-0 opening round win over No. 12 Kingsburg (10-19). He then went 5 1/3 innings in Wednesday’s 6-5 comeback win over No. 9 Bakersfield Christian (16-15) where he gave up five runs on nine hits, two walks and two strikeouts.

Watts describes Alba as “stoic” but even the team’s ace, who is one of the most unbreakable, focused players on the diamond, has had to make some adjustments for the playoffs.

“I still, I have to not let my nervousness get to me and keep playing how I do,” Alba said. “I know I got defense to back me up.”

The Marauders’ defense is made up of outfielders Aidan Galvan, Daniel Andrade and Alexza Sandoval; infielders Anthony Carabay, Matthew Cloyd, Tori Powell and Aaron Hernandez; and catcher Troy Nieto. Powell also pitches for the team and was the winning pitcher in the Marauders’ 12-7 win over No. 13 Yosemite (17-13).

“My teammates, we’re really close,” Alba said. “A lot of us have been together for four years and even before that in Little League. So I think, we have a close bond and I think that’s why we can work so good together.”

Cloyd, a shortstop and four-year varsity player, has started nearly every game for the Marauders and was left in tears after Carabay hit a sacrifice fly to score Powell in the team’s walk-off semifinal win against Bakersfield.

“I cried, I couldn’t hold it in,” Cloyd said. “This feels great. We’ve been trying for four years but we hadn’t made playoffs. The year we make playoffs, we get to go to Valley. Emotional.”

The game was rough for Cloyd in particular after suffering a shoulder injury diving back to first base in the first inning. He knew he had his parents worried after watching his mom pace back and forth while he was on defense, but he said there was no way he was coming out.

With an ice bag on his shoulder Thursday, Cloyd said he was feeling a lot better and that he will definitely be ready for Saturday’s game.

Cloyd and the rest of the defense are pretty much set for Saturday’s game but Watts said he still hasn’t decided on who will get the start on the bump.

“Everyone’s healthy and everyone’s eligible,” Watts said. “Our starter [Alba] went 70 pitches on Wednesday and our relief guy went 22. So with two days rest, they’re both eligible to pitch in the game. I still haven’t decided who’s going to start for us. I want do a little more homework on Chowchilla but we’re confident with where our pitching staff is at.

“We like the combination of the two and how they compliment each other,” Watts said. “Ricky’s kind of a finesse, command, pound-the-strikezone kind of guy. And Tori’s considered more of a power arm for us.”

One of the Marauders biggest postseason hitters is Hernadez, who has had multiple hits in every game and drew the lead-off walk in the seventh inning Wednesday to start the team’s game winning rally.

“That was — I [didn’t] know what to do,” Hernandez said. “I was so nervous. It was just, hearing my teammates say, ‘You’re the one. You’re the one.’ First pitch, expect the fastball get curveball way out in front. Nothing I can do about that. Then don’t get another pitch to hit so I was chilling. Then when I get walked, I’m just like ahh. First thing that comes to my mind — look at the dugout and just dance.”

On what’s working for him at the plate, Hernandez said, “Just getting my pitches, waiting on it and timing everything up. And batting practice with my coaches. They all help me, it all helps. Worked on my swing a little bit before playoffs and now it’s just rolling for me.”

Watts said the Marauders were going to take things easy Thursday and have a longer practice Friday. But he also said there’s nothing new to add and they’ll focus on their fundamentals as always because even though it’s their first trip to Valley, it’s just another ballgame for Monache.

“These guys have done such a good job, all year long, that I mean really once the game starts, really it’s just another ball-game,” Watts said. “It’s just another seven innings and we’re trying to collect 21 outs. And when that’s said and done, we’re hoping we beat them in the most statistical category, and that’s run scored.”