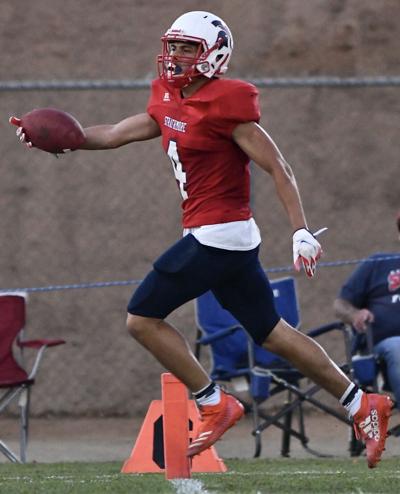 STRATHMORE - The machine that’s the Strathmore Spartan football team kept firing on all cylinders, handing the Orange Cove Titans a loss they won’t want to remember Thursday night in a 48-0 drubbing at Spartan Stadium.

It was all Adrian Sierra on the opening drive. After returning the opening kickoff to the Spartan 45 Sierra rushed 3 times for 55 yards, with the big run being a 39 yard TD scamper down the left side where he tight roped the sideline to get across the goal line. The PAT was missed and the Spartans led 6-0

After forcing a punt Senior QB Jaylen Oats would find Manuel Andrade on a beautiful 45 yard scoring strike. Oats would run in the 2 point conversion to give the Spartans a 14-0 advantage.

Orange Cove would put together its best drive of the night on their next possession using a 16 play drive to move the ball deep into Spartan territory, but the Spartans D stiffered in the red zone and forced a turnover on downs to keep the Titans off the scoreboard.  It took three minutes and 16 seconds for the Spartans to score again as they kept the ball on the ground in a 7 play drive that was capped off by a 2 yard Sierra TD. Cael Alkire booted the PAT through and the Spartans had built a 21-0 lead.

After a Bryson Bias interception Strathmore would march 55 yards in 6 plays with Bernardo Navarro bursting up the middle for a 25 yard TD plunge. The PAT was blocked keeping the score at 27-0.

The Titans would put together another good drive, moving the ball inside the Spartan 40 but once again the Spartan defense stood firm and forced a turnover on downs.

After Oats was intercepted by the Titans defense the Spartan D came up with an interception of their own as Jaime Arredondo picked off a Titan pass and returned it to the Orange Cove 48 with just 13 seconds left.

That’s all time Sierra and the Spartans needed as he busted up the middle and broke loose on a 48 yard TD run.  Navarro would add the 2 point conversion and Strathmore had run away to a 35-0 halftime lead.

A running clock was used the entire 2nd half but that didn’t stop the Spartans from tacking on a couple scores. They got a 5 yard TD run from Samuel Poole to take a 42-0 lead and then Jacob Poole would make a nice move to break free on a 73 yard TD run to cap the scoring.

Sierra rushed for 143 yards and 3 scores to lead the Spartan offense.  Strathmore improves to 2-0 on the year and will play at Caruthers next Friday before hosting Monache on September 10.