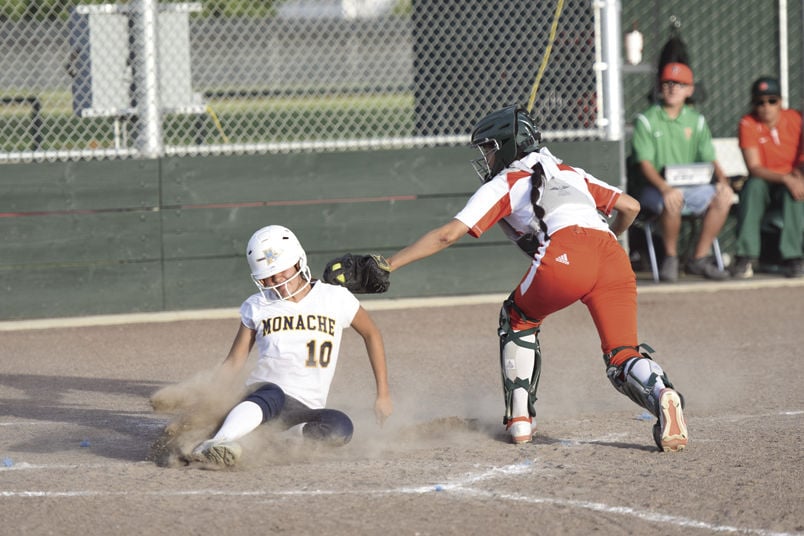 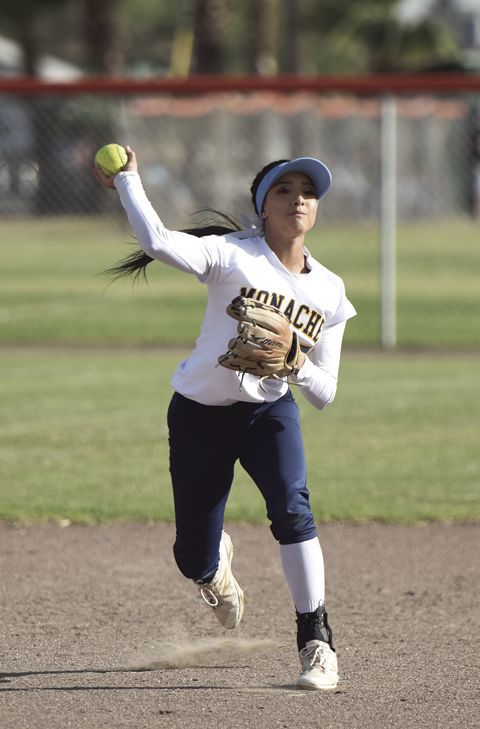 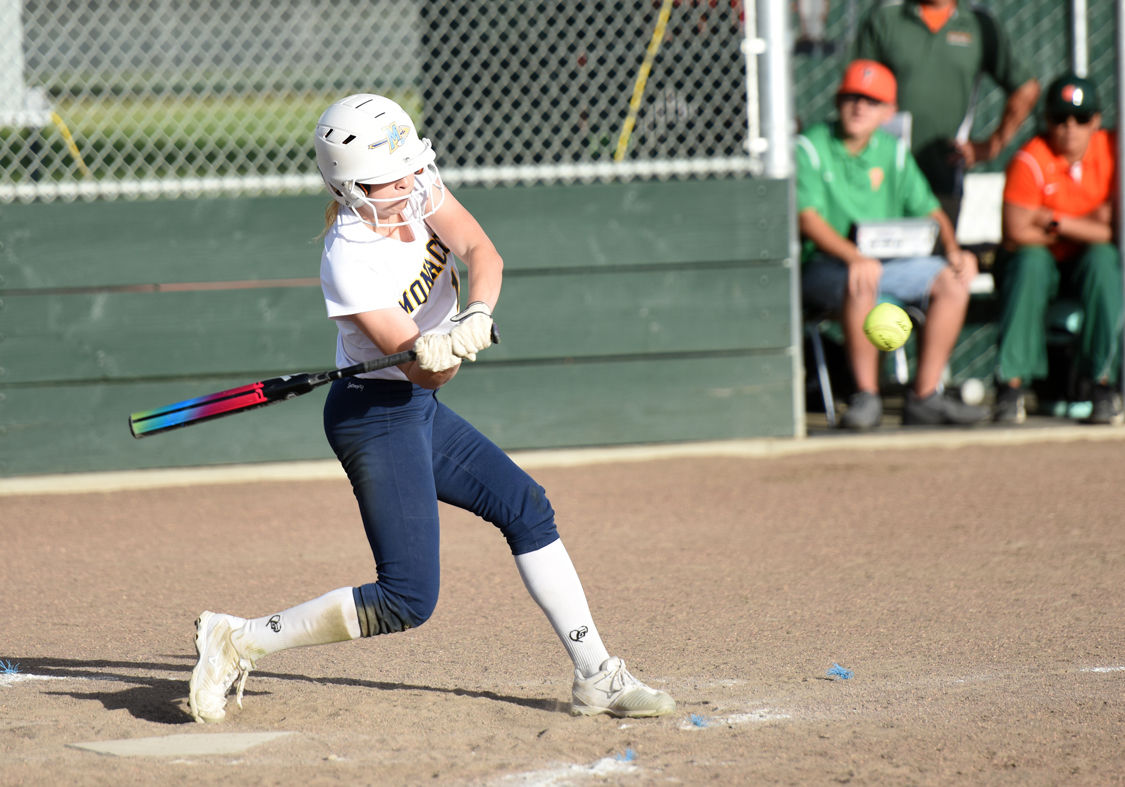 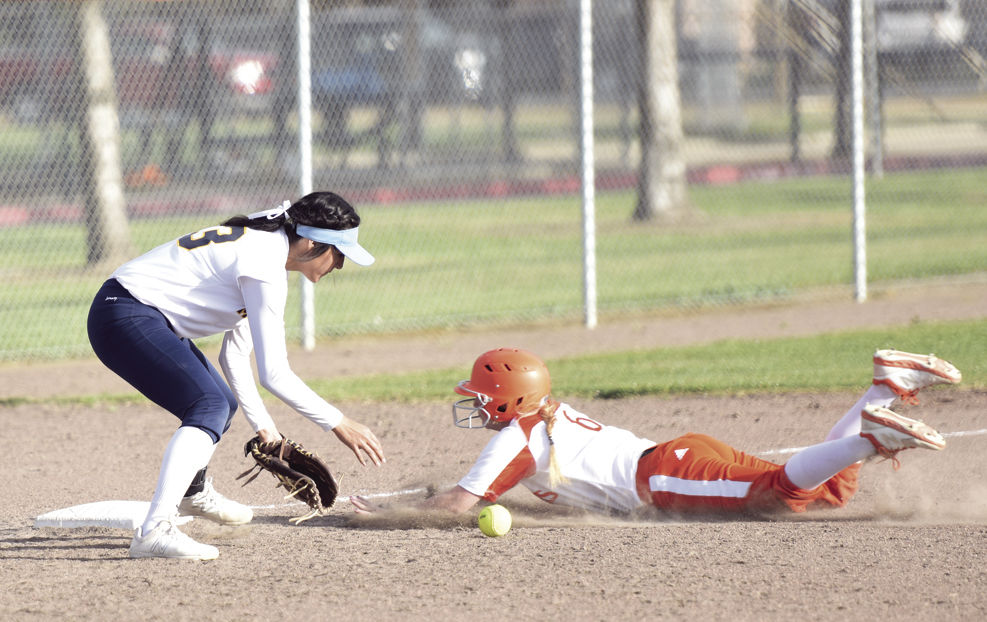 It wasn’t in any way perfect or pretty, but Monache High School softball pulled off a 14-7 comeback win at rival Porterville in Tuesday’s East Yosemite League game.

It was the Marauders’ sixth straight win against the Panthers, dating back to 2016.

“My coaches said we won ugly, I agree,” MHS head coach Dave Koontz said. “It wasn’t a pretty win. Porterville, you know they battled. They swung the bats. This is a rivalry game, they’re going to be up for this game and they played that way. And we made mistakes. We’re still making too many mistakes, but the bottom line, we swing the bats.”

Heading into the top of the fourth, Monache (6-7, 4-1 EYL) trailed Porterville (4-7, 1-4 EYL) 2-1, after Kailyn Castle and Ariana Rivas were the only players to get hits in the first two innings. But two leadoff walks set MHS’ Sarah Rodriguez up for an RBI-single, that put her on second after an errant throw in the infield. From there, the Marauders’ offense came to life.

Oriana Gutierrrez hit a sacrifice fly to bring in Mia Rivas, Castle and Ariana Rivas were walked, Evette Mendoza took one for the team with the bases loaded to bring in a run and Cieanna Correa’s hit into a fielder’s choice brought in another run to give Monache a 5-2 lead.

In the bottom of the fourth, Porterville’s Brookelyn Gutierrez had a sac fly of her own, but the very next half inning, Castle erased it with one of her own and Mendoza brought in two more runs — one of them the eventual game-winner — on a RBI-double.

But the win truly became an ugly one in the sixth, when Monache loaded the bases and brought in five runs over the next three at-bats after back-to-back Porterville errors in the outfield. Just before the inning closed, Correra brought home the Marauders’ final run with another RBI.

“It’s like I told the girls, the score doesn’t give us credit,” PHS head coach Jennifer Schoonover said. “One inning and I think the score goes back to 7-7. And I think that one inning we had made three errors that would’ve been three outs, and no one would’ve scored. Then we would’ve had a 7-7 ball game. And I think that goes back to our inexperience of pressure games and just our immaturity -— five starting freshmen. But yeah, that’s been our story this year. The one inning.”

Ariana Rivas took the win on the mound after going 5 ⅓ innings with six runs allowed on eight hits, three walks and two batters hit. She also had two strikeouts. Castle relieved her in the sixth and closed the game with one run allowed on one hit and three strikeouts.

Getting the start, and closing, on the mound for Porterville was Jennilu Martinez. Through 4 ⅓ innings, Martinez gave up five runs on three hits, four walks and one strikeout. Madison Johnson relieved her in the fourth and had nine runs on nine hits and three walks with one strikeout in 2 ⅔ innings.

For the Panthers, Cloey Loflin and Desiree Medrano both went 3-for-4 with Loflin getting a double, a walk and scoring four of the team’s runs. Medrano scored one run and had a RBI. Brookelyn Gutierrez also had two hits and a RBI.

“We beat Tulare Western so we’re no worse than tied for first,” Koontz said. “We’re right in the middle of it. We’re excited. And now we go to Tulare Union on Thursday and see what we can do over there.”