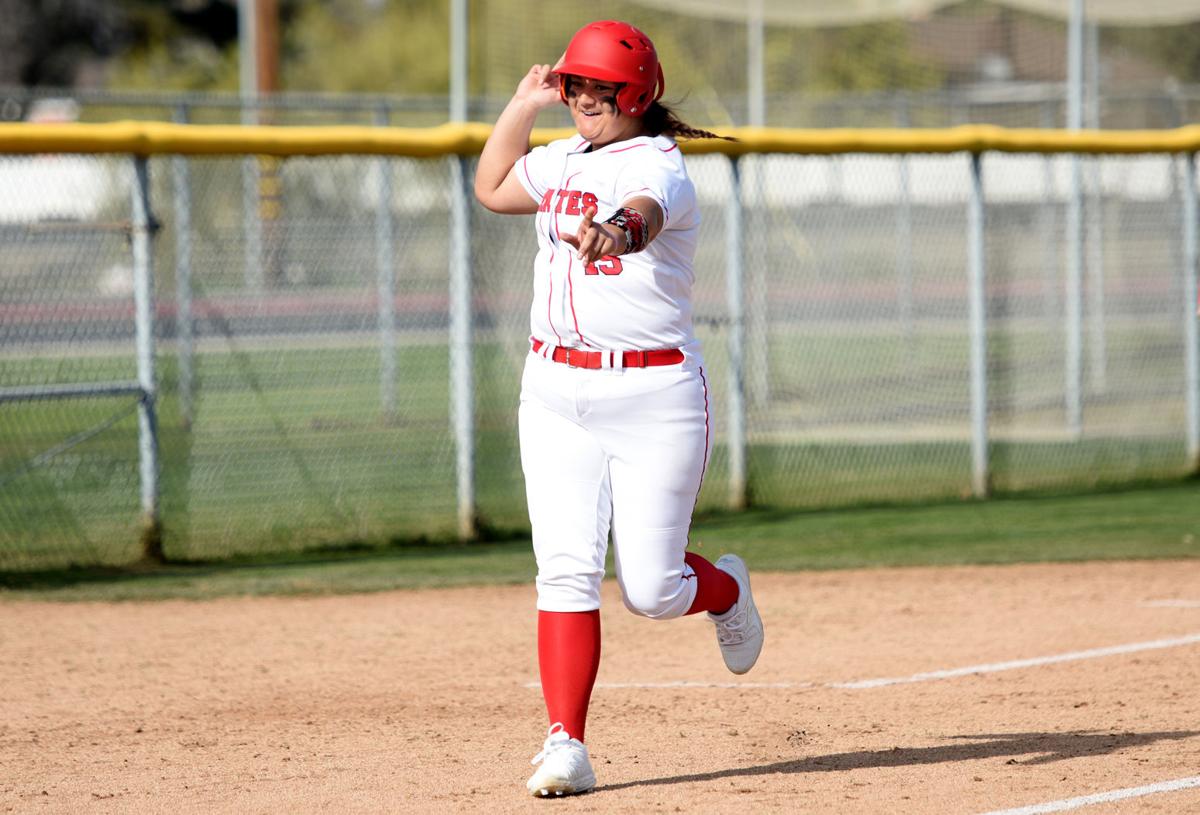 Porterville College's Kuea Angilau rounds third base celebrating her first home run of the season during the first game of a doubleheader against Victor Valley College, Friday, Jan. 31, 2020 at Porterville College. 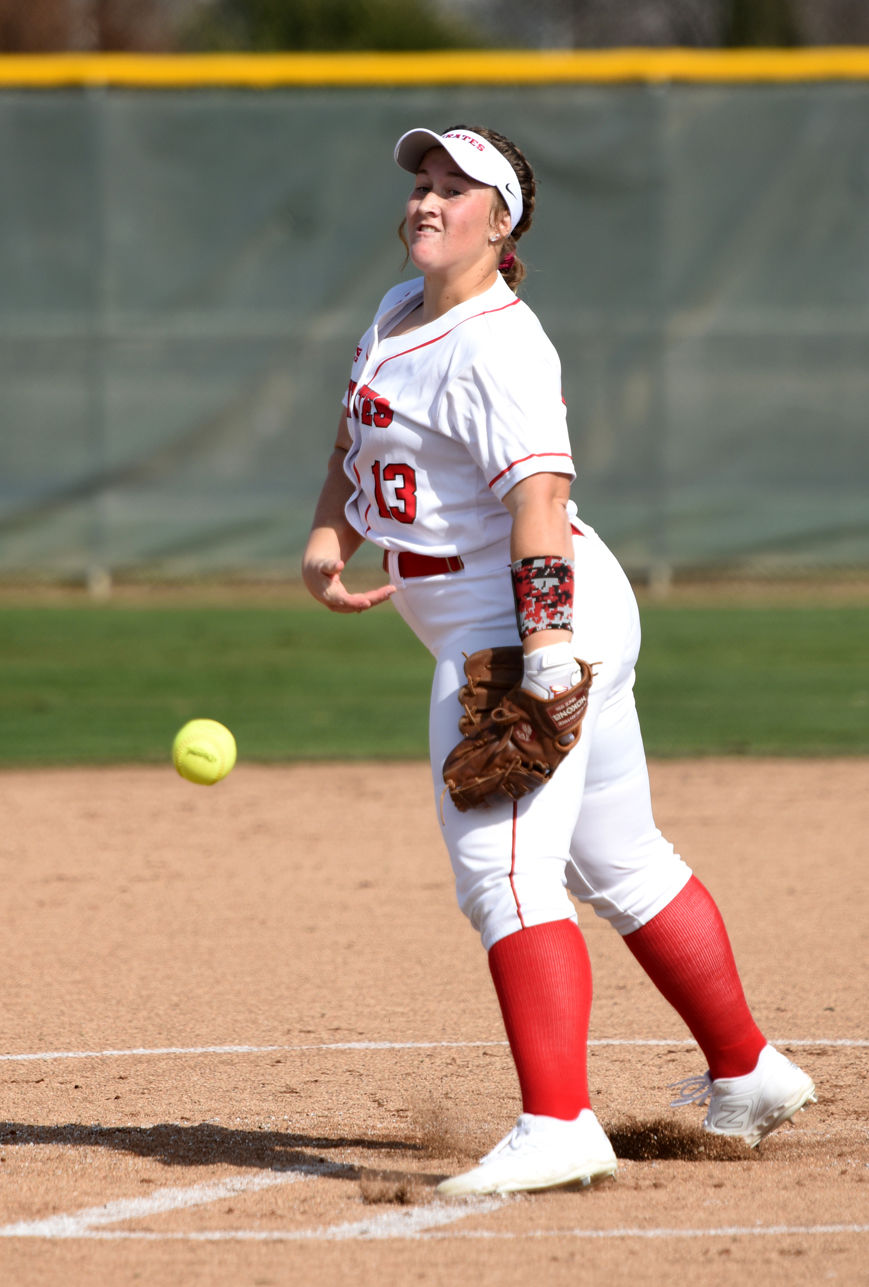 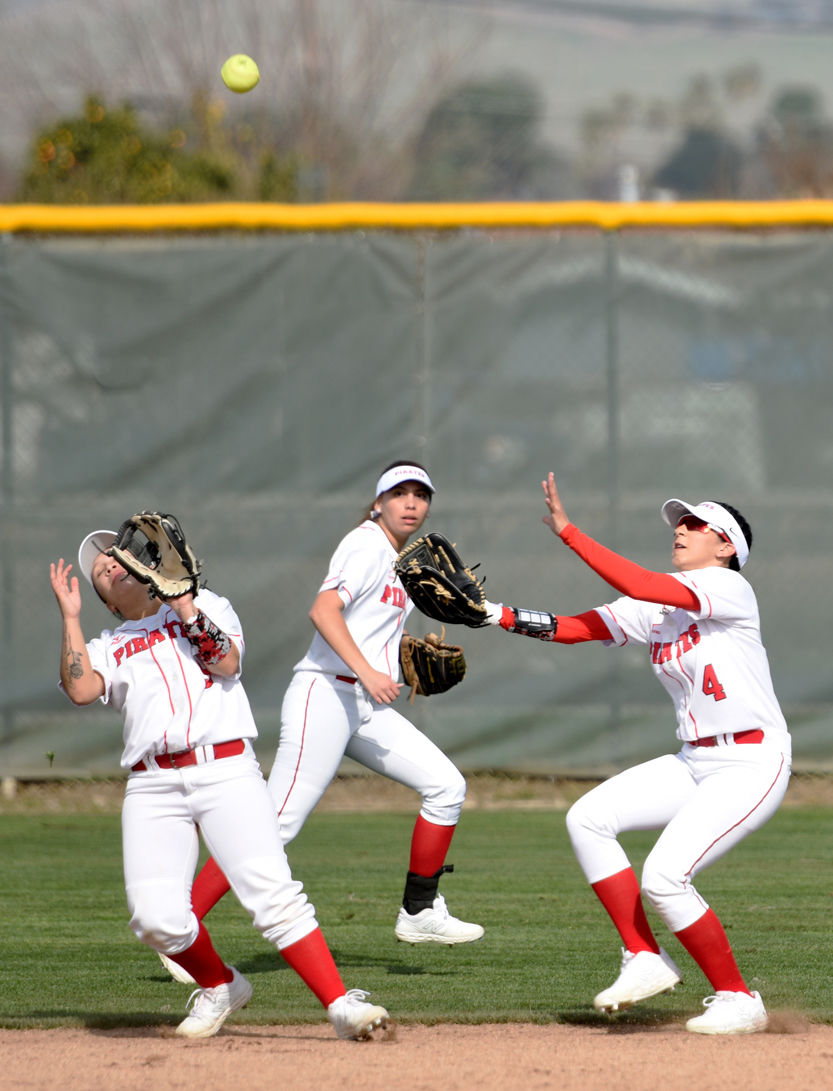 Porterville college center fielder, Sayra Sanchez (4), comes in to make the catch during the first game of a doubleheader against Victor Valley College, Friday, Jan. 31, 2020 at Porterville College.

Porterville College's Kuea Angilau rounds third base celebrating her first home run of the season during the first game of a doubleheader against Victor Valley College, Friday, Jan. 31, 2020 at Porterville College.

Porterville college center fielder, Sayra Sanchez (4), comes in to make the catch during the first game of a doubleheader against Victor Valley College, Friday, Jan. 31, 2020 at Porterville College.

Vickie Dugan said her team could hit and that they did.

Dugan, PC’s head coach, said earlier in the week that one of the team’s strengths was their ability to score runs. Her team proved her right with every batter getting at least one hit and one run scored.

“I liked the way our bats performed,” Dugan said. “And that’s what I told you when we talked before, we’re going to produce some runs. And they were solid hits.”

Victor Valley’s Demi Limon took the loss in both games but Dugan said the pitcher had “decent speed” but the Pirates were just hitting well.

“(Limon) got tired by the second game but she still started out with decent speed,” Dugan said. “We got some solid hits. Did some offense. That’s what I was looking for.”

The Pirates have back both of last season’s top hitters — third baseman Annisa Gomez and first baseman Kuea Angilau — and the two seemed to pick off right where they left off.

Angilau, the state’s third best home run hitter last season with 13 home runs, needed just two at-bats to bring in her first homer of the season. It was a two-run shot over the left field fence.

PC’s bats were hot but freshman pitcher, Ally Boyd, did well in her debut to pitch the 10-0 shutout. Boyd allowed just four hits, one walk and had two strikeouts that game. At the plate, Boyd was also 5-for-7 with a double, three RBIs and three runs scored for the day.

Porterville scored in every inning of the first game — two, five, one, then two runs — while holding Victor Valley (0-2) scoreless. But the second game was a different story.

The Pirates jumped out to a quick 5-0 lead after the first inning then tacked on two more runs in the second. They went through their entire lineup in the third and scored 10 runs for the 17-0 lead, but gave the Rams their first run of the day in the top of the fourth when relief pitcher Jaicey Pate came in. Pate and Boyd pitched in the fifth but the team struggled to get outs and gave up five more runs.

“They lost focus,” Dugan said. “They have to learn no matter whose in the circle they play just as hard, just as strong. We also told them when we get ahead like that, we just want outs. We were still trying to get the play at home and all we wanted to do was get outs, get out the inning when you’re like that.”

On the mound, Boyd went 4 1/3 innings with two runs on five hits and two strikeouts. Only one of those runs was earned. Pate pitched 2/3 of an inning but allowed four earned runs on four walks, one hit and one strikeout. The Pirates totaled three errors.

“They know that they need to correct that part,” Dugan said about the defense. “Mainly they lost focus, quit communicating. We had balls go in between people that should’ve been caught. Matter of communication, matter of focus. They’ll fix it.”

“West Valley always has a good team,” Dugan said. “Vicky (Piatt) played on the Olympic softball team so she always produces a good softball team. We can’t afford to do what we did today. If we switch pitchers or even if we don’t, we can’t let our communication go. We can’t let our focus go. And we have to still produce the offense we did.”

Boyd said her arm feels fine and she’s ready to go again today. Dugan also said the team’s worked on Boyd’s endurance during practice to prepare her for these types of situations.

“I’m good with that,” Boyd said about pitching against West Valley. “Just ice it tonight, be ready for tomorrow.”

At the plate, the Pirates were relentless.

In the second game, Gabrielle Vega had a double, two RBIs and three runs scored.