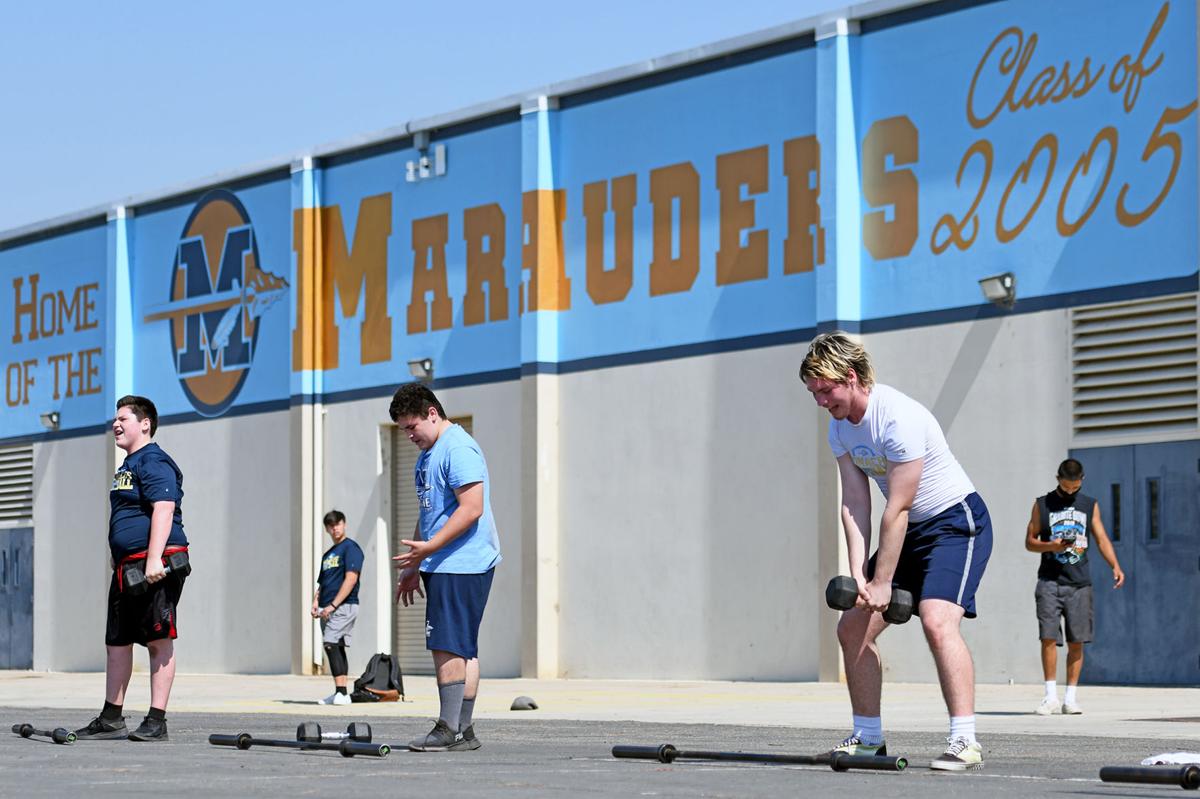 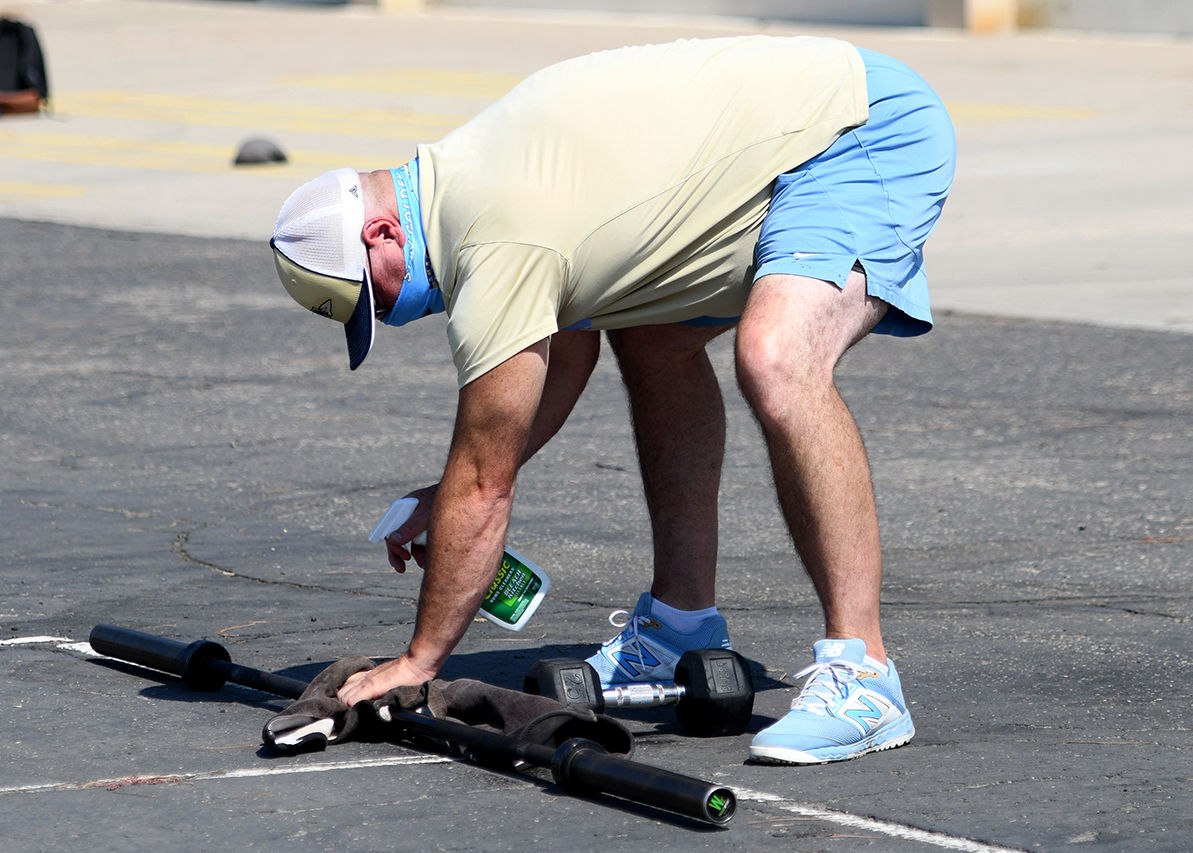 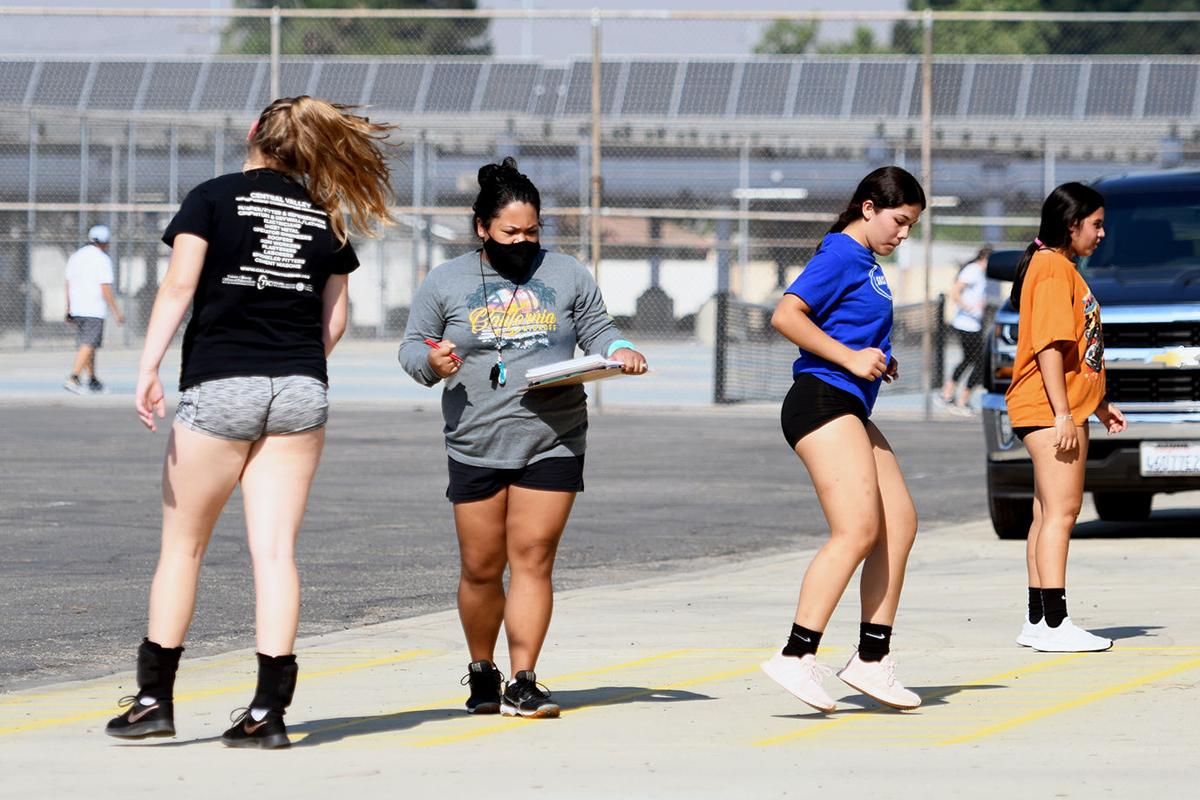 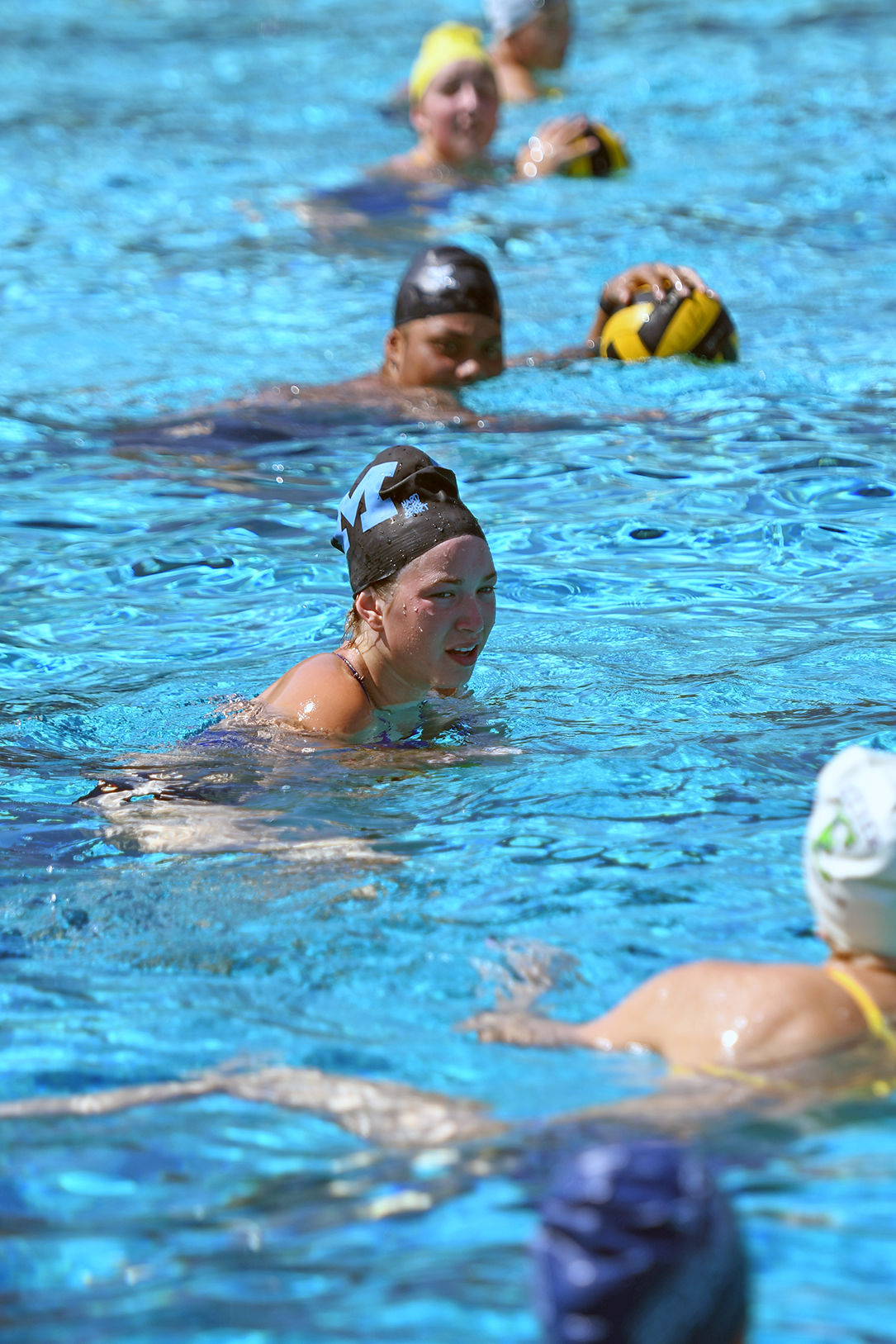 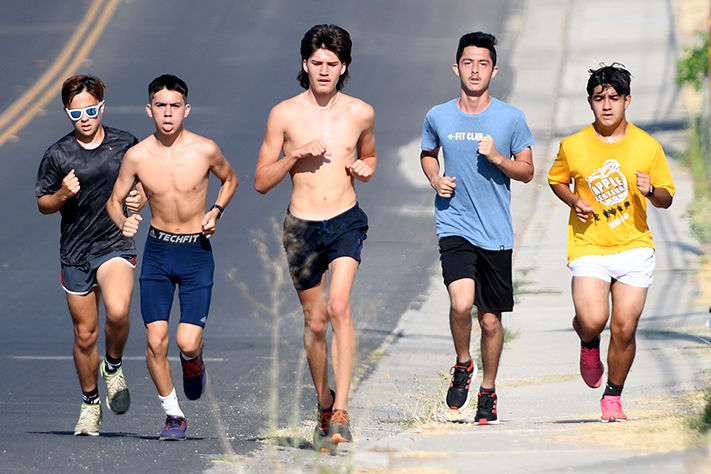 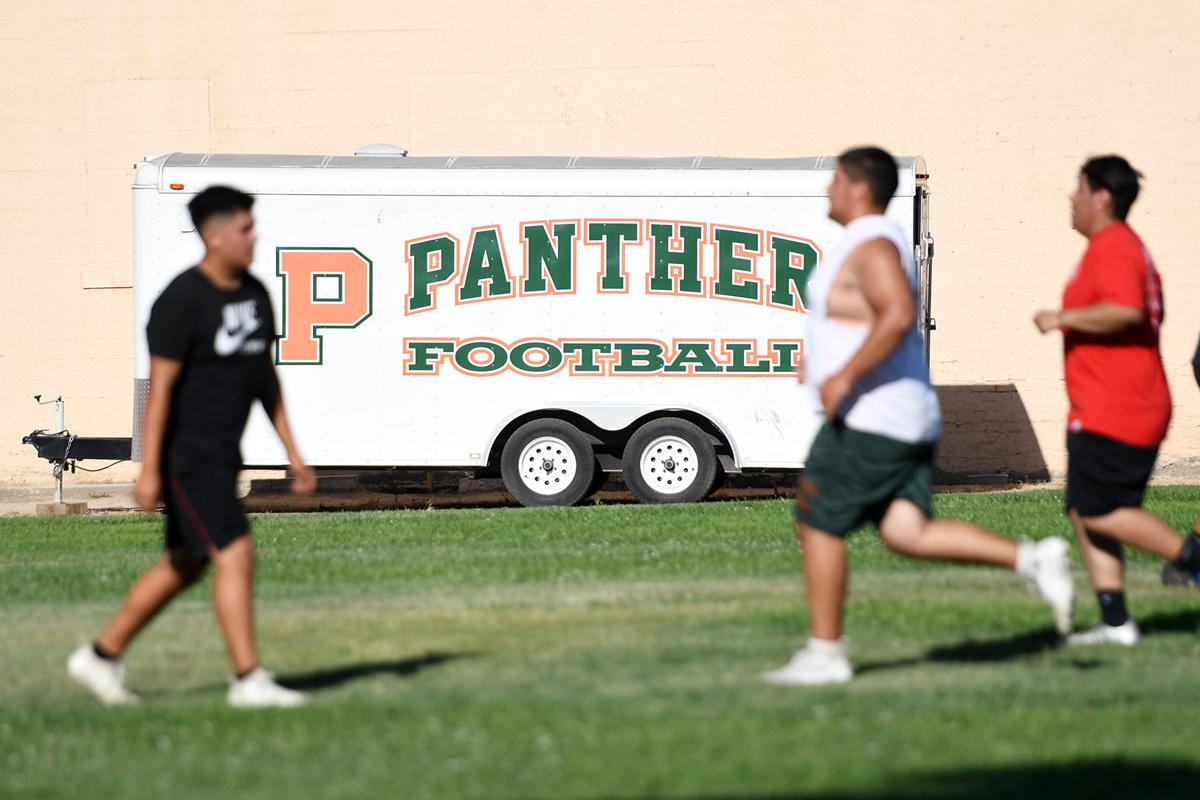 No gyms, no weight rooms.

Less than a week after area teams were given the go-ahead to begin summer workouts, Porterville Unified School District put a stop to indoor workouts for the next two weeks starting today because of a rise in positive COVID case numbers in Tulare County.

“The word we got today is starting tomorrow, for two weeks, we are not allowing anything indoors,” PUSD athletic director Richard Rankin said Monday. “So no gym, no weight room. Our outdoor practices will continue but everything indoors has been shut down.”

Monache, Porterville and Strathmore High School football all began outdoor workouts last week with the Marauders starting on Thursday while the Panthers and Spartans started Wednesday.

Dagan Allee, a defensive end and tackle for MHS football, admitted he hadn’t been up too much since sports and offseason workouts were cancelled in the spring and was happy to just be doing something again.

“We worked out on Thursday and it was good to be out of the house,” Allee, an incoming sophomore, said Monday.

The Marauders are obeying the new rules by keeping pod groups to 10 and under for both the weight room and night practices. Players stick to these groups the entire time and will keep them each week.

Monache’s weight room pods have been able to work outside with five stages going Monday, Wednesday, Friday and four on Tuesday and Thursday. The program is averaging around 85 kids with 20 freshmen turning out.

MHS head coach, Shane Focke, said these workouts are focused on the basics.

“(The district) can pull the plug at any time,” Focke said. “So these are exercises they can do at home.”

Porterville head coach, Lisa Davis, said last week that her team had not begun face-to-face practices and are instead doing Google Classroom workouts. Davis was considering beginning face-to-face conditioning this week but she and her coaching staff made a decision to wait after learning the district's new policy.

“We had considered on moving outside but the coaching staff just met via Zoom and we have decided to hold off face-to-face conditioning with volleyball players until further notice,” Davis said via text Monday afternoon. “We will continue to send out our Google classroom workouts.”

On the workouts, Davis said, “It seems to be going really well. We have some funny videos the girls have sent us.”

Watching from above on the diving board, MHS head coach Kyla Conway supervised Monache’s girls water polo’s workouts in the pool. Conway said the workouts had drawn about 15 players and each one brings their own ball every day.

Because water polo players can’t pass or shoot against a goalie, the players are all doing individual workouts, working on wet shots and throwing against a wall. Conway said it’s been tough figuring out what her goalie can do since she's not allowed to block shots, but so far they've focused on getting her legs stronger.

Last week, PHS head girls water polo coach, Evan Thomas, said his team started workouts and everyone was happy to be back.

“Yeah it was good, the kids were all happy to be back doing something and it was great to interact with them again after so long,” Thomas said via text. “It was actually kinda nice to have the first part of practice to see how each athlete is feeling and talk to them a little bit about it. Not just show up and get to work.”

He said the team planned to begin using balls this week.

“That’s going to be a little more hectic I think but nothing too crazy,” he said. “They just have to use their own ball so no passing or shooting on goalie.”

Strathmore’s boys and girls head water polo coaches both said they won’t be starting anything until the CIF makes their announcement.

“We are being cautious and waiting for the CIF to announce the seasons of sport on July 20th,” SHS boys coach Tim Stadtherr said in a text. “ These (two) weeks were usually the time we took a “dead period” anyway.”

“We realize that some of these kids haven’t done anything for four or five months...so we’re not going to jump them right into serious conditioning,” PHS head coach Juan Jimenez said on a phone call last week. On Monday, runners ran between distances of two and eight miles in small groups towards Granite Hills High School.

“That’s the great part about this sport, it’s kind of individual and you can tailor it to what the kid needs and what they can handle,” Jimenez said.

“We have started practice, but no serious workouts yet,” Ishida said. “So far we are seeing about 20-25 athletes every weekday morning at 7 a.m. at Veterans Park.”

Granite Hills also started practice last Wednesday but only did a light workout and went over paperwork.

“We are trying to iron out some logistical details,” GHHS head coach Marty Kouyoumtjian said via text last Thursday. “Transportation is a challenge for students with parents that work, as well as students that are expected to work. We are shooting for a better turnout Tuesday after trying to resolve some of these challenges.”

Porterville and Granite Hills’ girls golf have yet to start their summer workouts.

“No we haven’t started,” PHS head coach David Herrera said in a text last week. “Since we go up to River Island, we have to pay for the use of the course. Once I make arrangements with them then we will start.”

Herrera said those arrangements will come after the CIF’s announcement.

Monache head coach Gary Perez and a few of his girls tennis players were on the school’s courts Monday morning. Perez said last week that the team would be starting this week and focusing on conditioning. He added that drills will begin when all of them are in better shape.