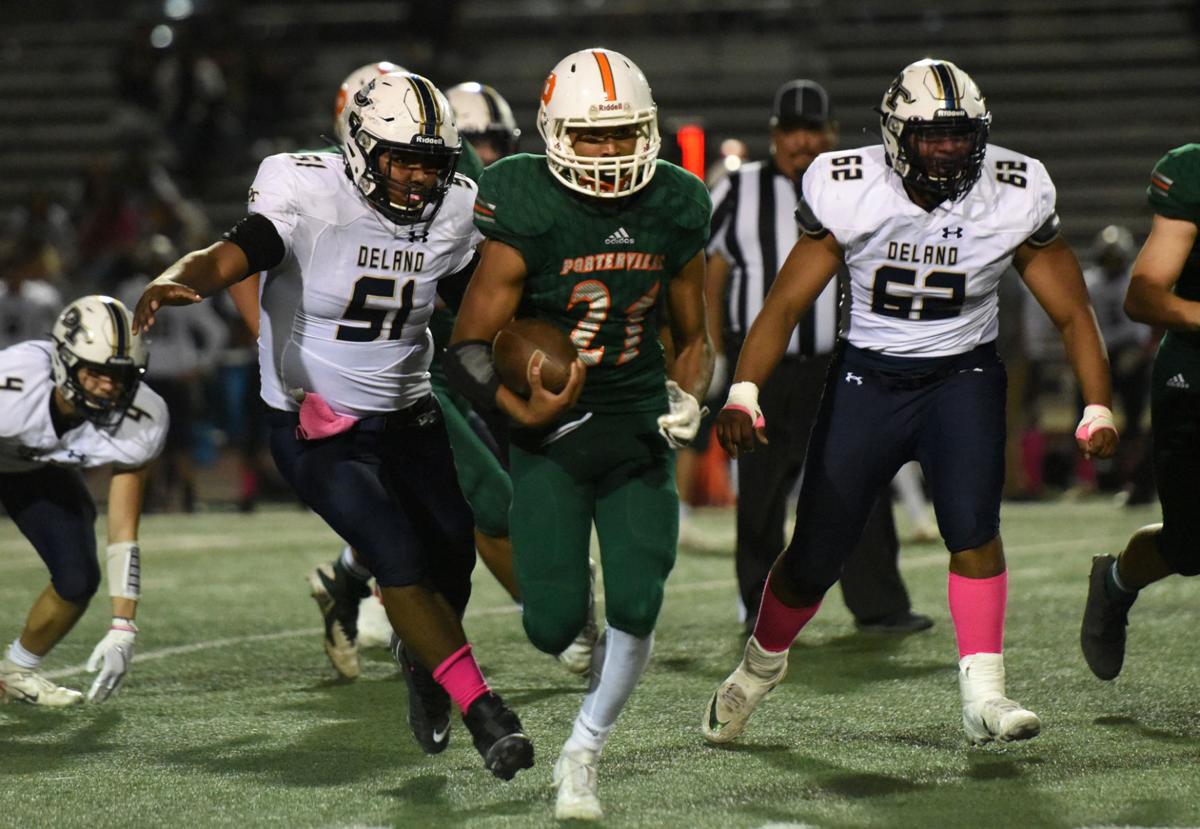 Porterville High School's Isaiah Ellis (21) runs with the ball during the first half of an East Yosemite League game, Thursday, Oct. 24, 2019, at Jacob Rankin Stadium. 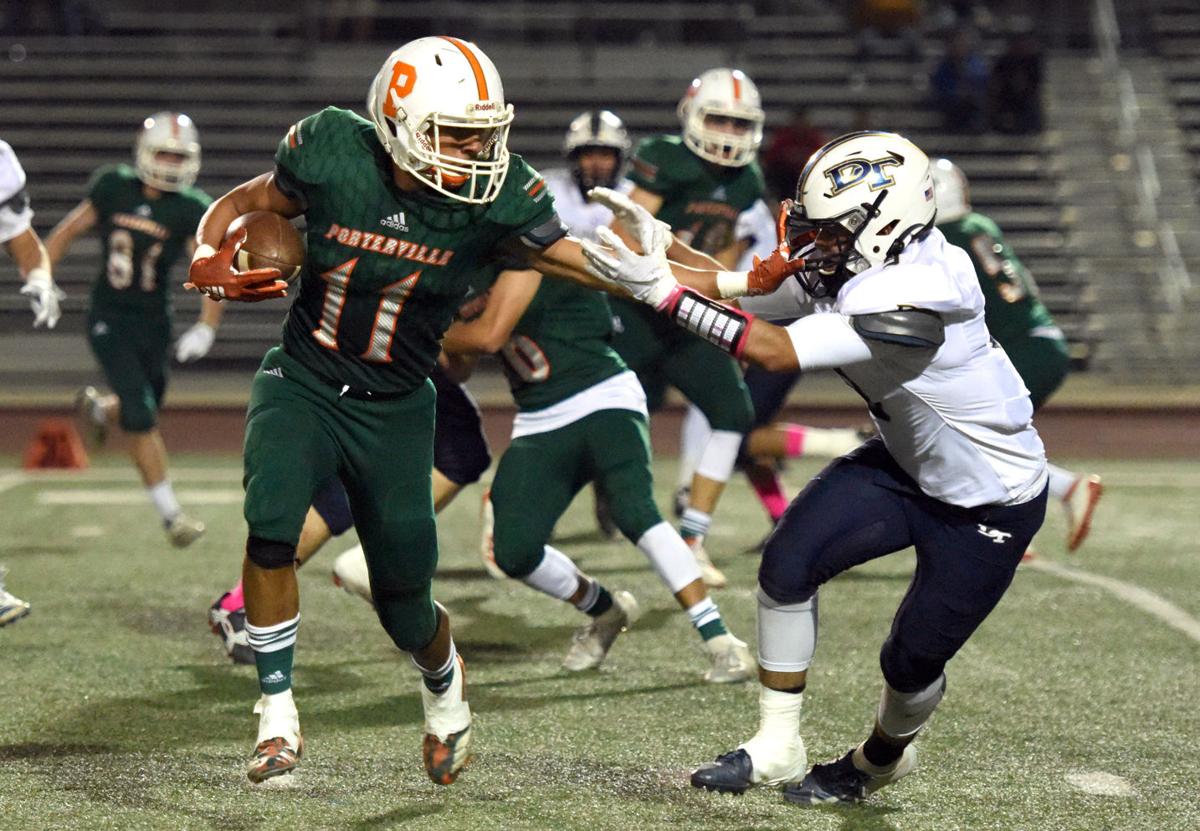 Porterville High School's Jovanie Cardenas (11) holds off a Delano High School defender while gaining yards after a catch during the first half of an East Yosemite League game, Thursday, Oct. 24, 2019, at Jacob Rankin Stadium.

Porterville High School's Isaiah Ellis (21) runs with the ball during the first half of an East Yosemite League game, Thursday, Oct. 24, 2019, at Jacob Rankin Stadium.

Porterville High School's Jovanie Cardenas (11) holds off a Delano High School defender while gaining yards after a catch during the first half of an East Yosemite League game, Thursday, Oct. 24, 2019, at Jacob Rankin Stadium.

There was no doubting Porterville High School football would beat Delano in Thursday’s East Yosemite League game, it was really just a question of how lopsided the score would be.

Needing one more win to clinch their spot in the playoffs, the Panthers overwhelemd the Tigers (0-9, 0-4 EYL) 48-6 for a 42-point victory — their second largest win of the season.

The game was essentially over in the first quarter when Porterville (5-4, 2-2 EYL) scored three touchdowns in the final 4 minutes and 30 seconds, to increase their lead from 7-0 to 28-0.

Quarterback Hector Nava Jr. and his receivers were in sync with the junior completing 11-of-18 passes for 309 yards and three touchdowns, while also rushing for 32 yards and two touchdowns on six carries.

Outside of one hiccup on the opening drive — where they dropped the kickoff and started inside their own 5-yard line, snapped the ball over the quarterback’s head and almost had a safety, then were forced to punt after three plays — Porterville played a pretty clean game.

“We got off to a weird start with the snap over the quarterback’s head in that first series, and punted, but our defense has been pretty solid,” PHS head coach Michael Machado said. “In the first half, got a bunch of three-and-outs and didn’t give up much. And we got the pass game going which we knew we could. We ran the ball a little bit better tonight, which is what we like to see. Pretty complete game.”

All the scoring occurred in the first half, and unlike last week against Tulare Union when Porterville didn’t capitalize on their defense’s stops, they scored every time they were in Tigers’ territory and on seven of their eight first-half possessions.

After their opening drive mishap, the Panthers next drive began on their 3-yard line thanks to a Delano punt from Porterville’s 38-yard line. Ten plays and 97 yards later, the Panthers were into the end zone on a 10-yard touchdown pass to Moses Andrade.

And from there on it was all Porterville.

The Panthers’ defense gave the Tigers little room to maneuver, and on their final three possessions of the first quarter, they had a three-and-out, a blocked punt and a turnover on downs, respectively.

“Really it’s the front seven, so the defensive line and the linebackers set the table for everybody,” Machado said. “We get good pass rush. And Larry Duran is pretty much a double team every time, which frees guys up to run around and make plays behind him. And then Isaak Guzman and Jayson Thao and those linebackers have been making plays when they need to make them. So when you don’t miss tackles, you play pretty good high school defense.”

On the other side of the ball, Porterville picked apart Delano’s defense with Nava Jr. hitting Javier Benevidez for a 42-yard touchdown pass before running the ball in on a 1-play drive for a 7-yard touchdown after the blocked punt on the next drive. The Panthers’ final score of the first quarter was a 8-yard run by Isaiah Ellis.

Nava Jr. and Ellis scored the team’s final three touchdowns in the second quarter. Nava Jr. had a 1-yard run before Ellis stretched out for a one-handed grab on a 69-yard touchdown reception the next drive. Ellis followed that up with a 40-yard touchdown run after Guzman intercepted a Delano quarterback.

Ellis finished with 81 yards and two touchdowns on six carries, and a team-high 139 yards and one touchdown on five receptions. Jovanie Cardenas was second in yards with 99 on two receptions.

PHS kicker Nick Ward was also 6-of-7 on PATs.

Delano didn’t get on the board until the last minute of the first half when they scored on a 10-yard reception.

Porterville is headed back to the Central Section Division IV playoffs but before they begin the postseason, they’ll finish the regular season with Monache (2-7, 1-3 EYL) in the Granite Bowl rivalry game.

“Those games probably, usually always get a little silly at some point but we’re just going to do what we do,” Machado said. “Offensively we’re going to attack through the air and on the ground. We’re going to play tough defense. We’re going to try to put them in a long down and distance situations. Try to get them into a situation where they’re uncomfortable and I’m sure they’ll try to do the same with us.

The Marauders are on the brink of missing playoffs and need to beat the Panthers for a chance to qualify for the postseason. Kickoff is 7 p.m. at Rankin Stadium next Friday.