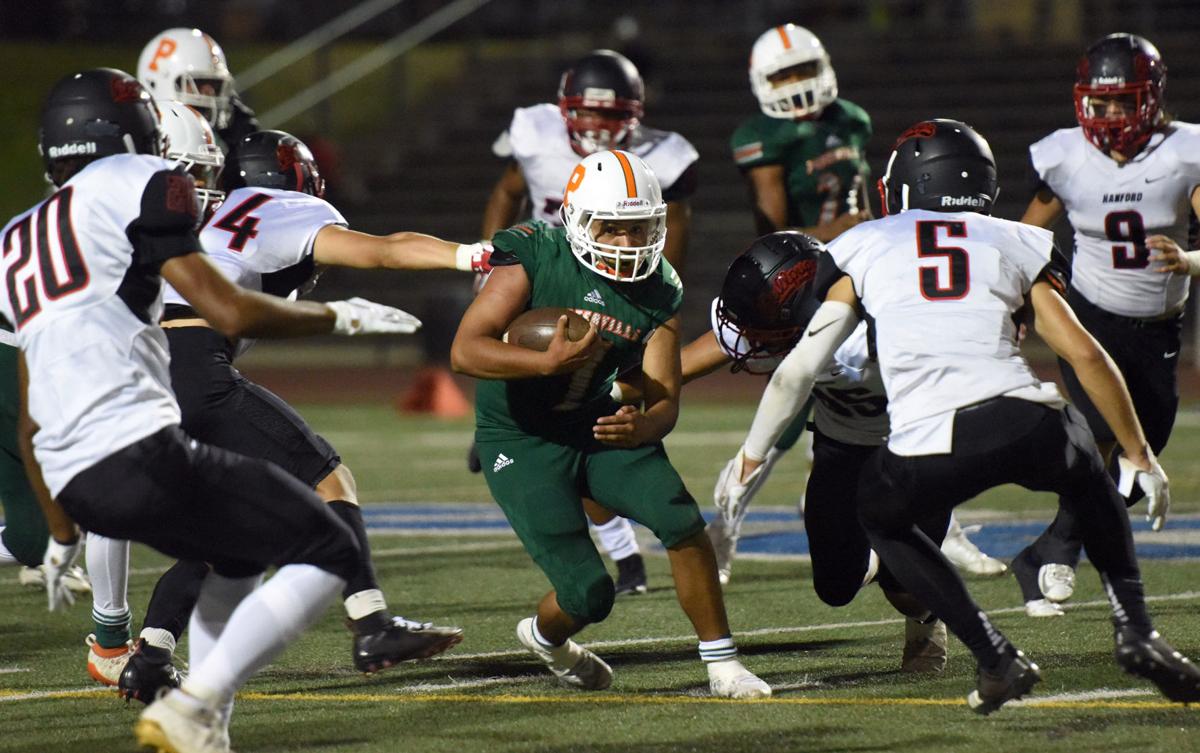 Porterville High School's Hector Nava Jr. is swarmed by Hanford High School defenders on a quarterback keeper in the second half of a game, Friday, Sept. 13, 2019, at Jacob Rankin Stadium. 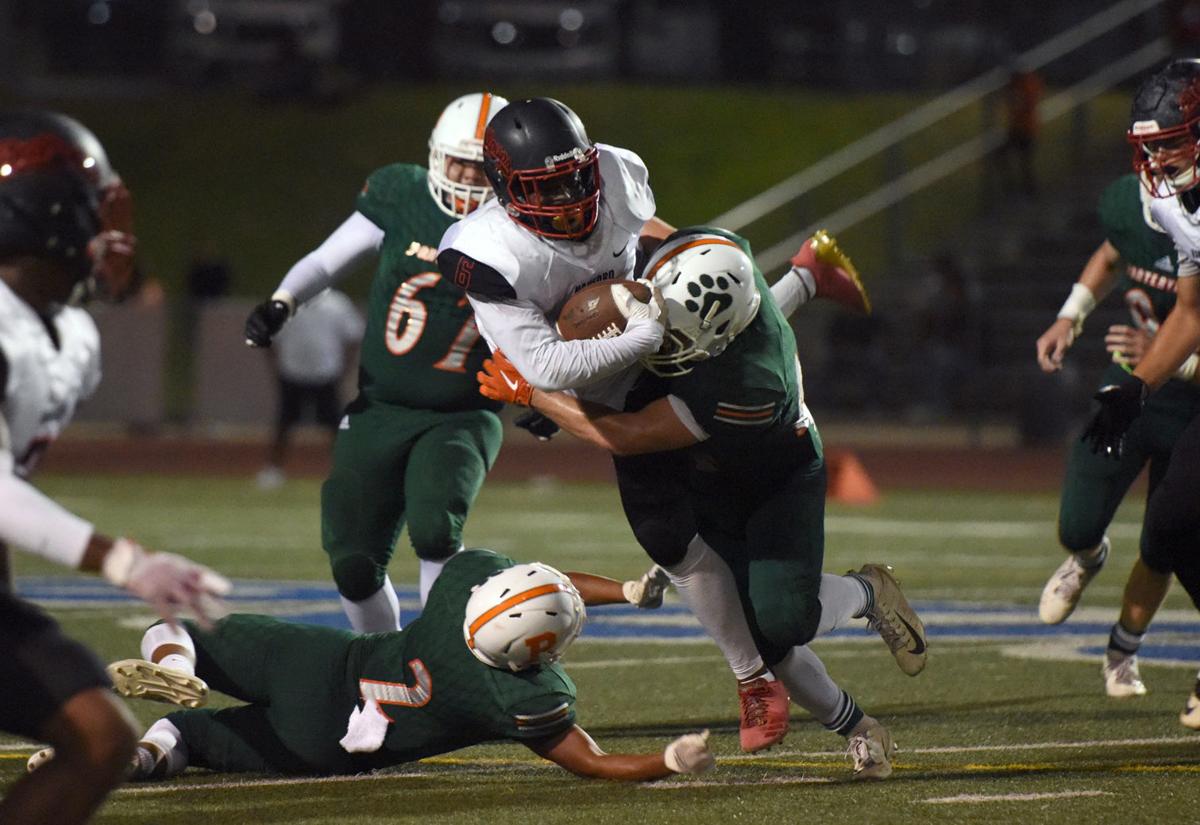 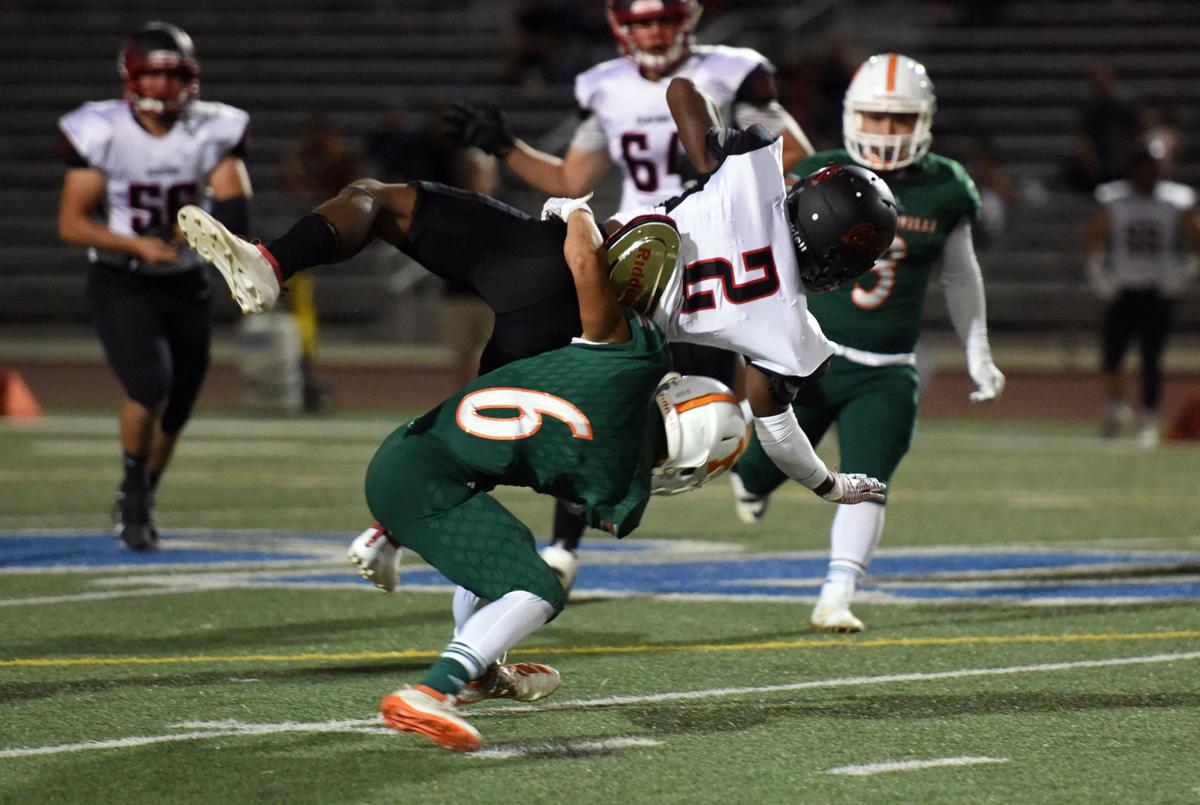 Porterville High School's Hector Nava Jr. is swarmed by Hanford High School defenders on a quarterback keeper in the second half of a game, Friday, Sept. 13, 2019, at Jacob Rankin Stadium.

Friday the 13th is a day associated with bad luck and Porterville High School football may have caught some of that in Friday's loss to Hanford.

In their previous two meetings under head coach Michael Machado, the Panthers had walked away victorious with slim wins but this time it was the Bullpups who pulled out the lopsided 35-14 win at Jacob Rankin Stadium.

Div. IV Porterville's luck against Div. II Hanford (4-0) began running out on the first drive of the second half when the Bullpups picked up the tempo and marched down the field to score a 9-yard touchdown run by Luttrell Young. Down 7-6, Hanford went for the two-point conversion and found success on a pass from quarterback Juaron Watts-Brown for the 8-7 lead.

Forced to punt from their own 25-yard line on fourth-and-9 on the next drive, Porterville (2-1) gave Hanford the ball back near midfield and the Bullpups once again went to work. Picking up first downs on back-to-back plays, Hanford was stopped once before Kaden Lewis ran the ball in for a 3-yard touchdown. After the Panthers were penalized twice on the extra point, the Bullpups tacked on another two on a Watts-Brown keeper.

While Porterville's offense struggled moving the ball downfield with a three-and-out and then a turnover on downs on Hanford's 42-yard line; the Panthers' defense had no answer for the Bullpups. Before the third quarter could end Watts-Brown was in the end zone again, this time on a 3-yard run.

Life seemed to return to Porterville's offense with a 64-yard touchdown pass from Hector Nava Jr. to Jovanie Cardenas to start the fourth quarter, but on the Panthers next drive they couldn't move the ball past the Bullpups' 33-yard line.

In the final five and half minutes of the game Hanford scored two more touchdowns on 7-yard and 2-yard runs, respectively, to seal their win.

Despite a slow start to the game, Porterville had at least one other opportunity to score that came in the second quarter. Following a 33-yard touchdown pass to Javier Benevidez for the first score of the game, the Panthers' Lorenzo Hernandez recovered the ball on the ensuing kickoff after a Bullpups' player touched it.

Porterville moved the ball inside of Hanford's 20-yard line but a holding call pushed them back. Another penalty negated what would've been a 25-yard touchdown pass to Cardenas and the Panthers were pushed back again. They settled for a 34-yard field goal but unlike his two PATs, Nick Ward's kick fell short this time.

Porterville has a chance to turn things around, next Friday when they travel to Visalia for a non-league game against Div. III Golden West (4-0).