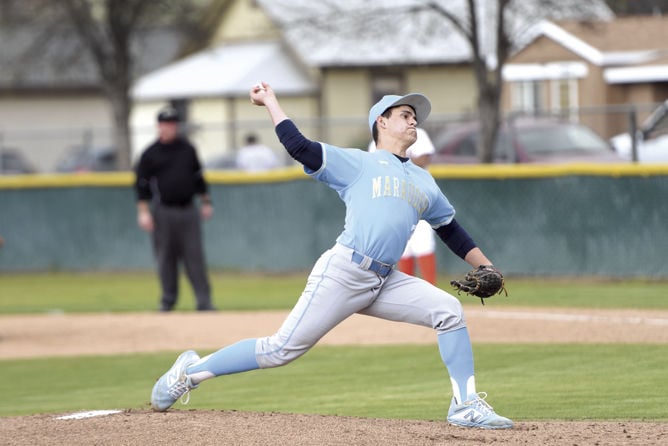 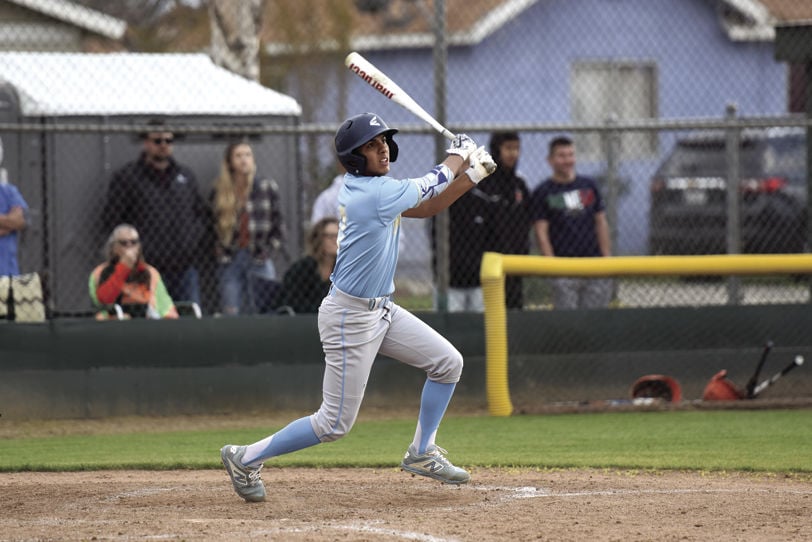 Monache High School's Alexza Sandoval watches his hit during a game against Porterville High School Wednesday, March 20, 2019 at Dave Frederick Field in Porterville. The hit was a two-run, RBI-double. 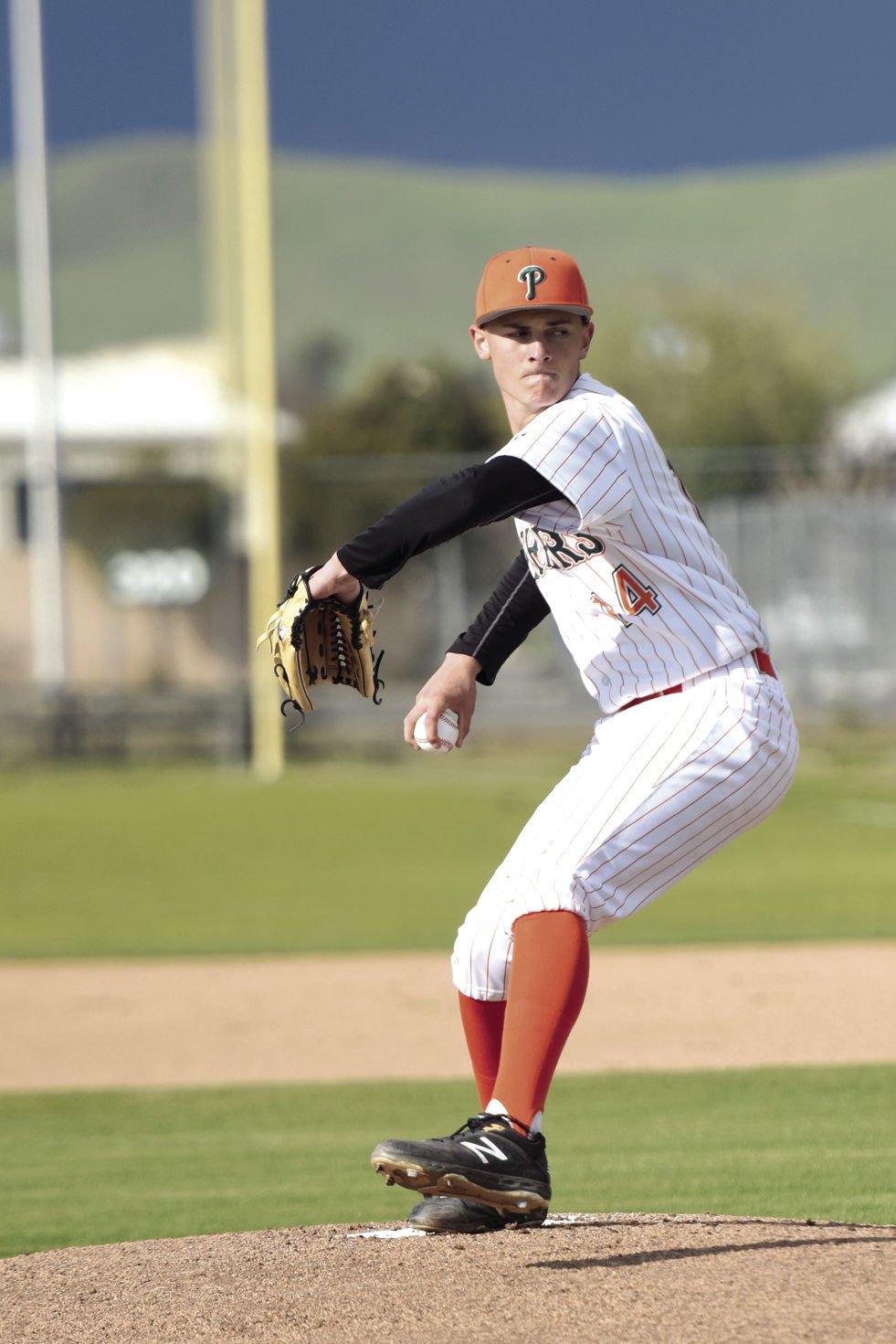 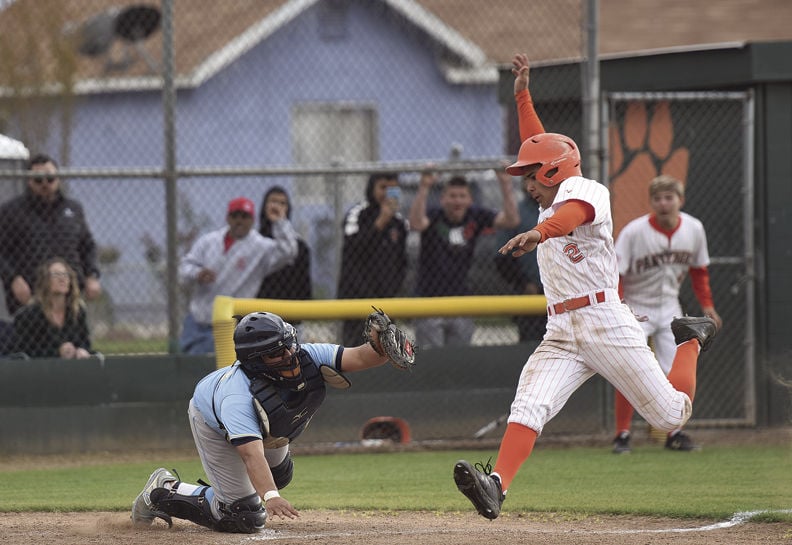 Monache High School's Alexza Sandoval watches his hit during a game against Porterville High School Wednesday, March 20, 2019 at Dave Frederick Field in Porterville. The hit was a two-run, RBI-double.

The pitching duel between Monache High School’s Ricky Alba and Porterville’s Noah Munoz came down to the final inning as both teams were scoreless through six in Wednesday’s East Yosemite League rivalry game at the Panthers’ Dave Frederick Field.

Munoz had pitched a stellar outing — a no-hitter through six — to keep the Marauders’ bats quiet, and even after giving up his first hit of the day to Monache’s Matthew Cloyd, Munoz got Anthony Carabay to bite and hit into a double play to get a quick two outs.

But that’s when the Marauders’ middle of the lineup came to play.

No. 4 and 5 hitters, Aaron Hernandez and Troy Nieto, hit back-to-back singles up the middle to put runners on first and second. Coming up in the No. 6 spot, junior Alexza Sandoval, became one of the Marauders’ heroes with a shot to right field for a two-run RBI-double and the eventual 2-0 win for the blue and gold.

“This club depends on each other,” MHS head coach A.J. Watts. “One game it’s the bottom third of our lineup. Another game it’ll be the top two. Tonight, you’re right. It was kind of our 3-4-6 guys.”

The Marauders (7-6, 3-2 EYL) backed up Alba with a double play in the bottom of the seventh to start the half inning, then Alba forced Porterville’s John Herrera to fly out to MHS center fielder, Daniel Andrade, for a quick finish to seal the win.

Alba got the win on the mound after going a complete game and allowing no runs on three hits and no walks. He went the first three innings with no hits allowed and finished with three strikeouts.

“It all started for us today with Ricky,” Watts said. “That’s two [games] in a row now where we’ve had outstanding pitching. I think he probably only had two or three two-ball counts. And [Porterville] can hit. I want to give a lot of credit to Noah Munoz too. I like our team offensively and he really gave us fits for six innings. We battled and competed in the seventh, and today we came away with the win. I really don’t think either pitcher deserved to lose. Munoz was good. We were good. Alba was good. Just one of those games.”

Sandoval went 1-for-2 at the plate with the two-run RBI-double and also reached on error in his first at-bat. Cloyd, Nieto, and Hernandez had the team’s only other hits for the day.

The Panthers (9-3, 3-2 EYL) lone chance at scoring a run came in the bottom of the sixth when Daniel Perez, who was on second after getting a hit then stealing a base, was moved to third on an error during Cameron Fish’s at-bat in the following at-bat. Perez reached third safely but after the ball was thrown slightly past MHS third baseman, Anthony Carabay, and Perez tried to go home but was tagged out by Nieto, the Marauders’ catcher.

“We’ve been struggling swinging the bat,” Hill said. “Soft stuff, you know. We just — I thought we made some good adjustments, hit a lot of balls hard right at people. But we’ve just been, like we swung the bat so well earlier in the year, we were scoring nine, 10 runs a game. It’s just all of a sudden, we just — we’ve got some internal problems we’ve got to fix.”

Porterville’s Ricky Carranza was the only player of the day to get multiple hits. Carranza went 2-for-3 while Perez also had a hit.

On the mound, Munoz took the loss after going all seven innings with two runs on four hits and no walks. He also retired five.

“Noah pitched great,” Hill said. “He had a no-hitter through six. Got two outs in the seventh and they, they got some big hits. I mean, Noah threw great. We played great defense. But offensively right now we can’t score runs. So you know, we gotta get better. We’ll see. It’s a good senior group. I’m not that worried. It’s a good group of kids, they’ve been here forever, they’re a very good baseball team.”

The Panthers and Marauders will see each other again at the end of the regular season with a game at Monache on April 30 and the final one at Porterville on May 2. For now the two have much more to focus on with a wide-open race for the EYL.

With Tulare Union (5-7, 3-1 EYL) and Tulare Western (3-8, 2-2 EYL) playing their rivalry game today, a win for the Mustangs would set up a four-way tie for first in the EYL between Union, Western, Monache and Porterville.

But Watts and the Marauders are less concerned about league placement and more so about each individual game.