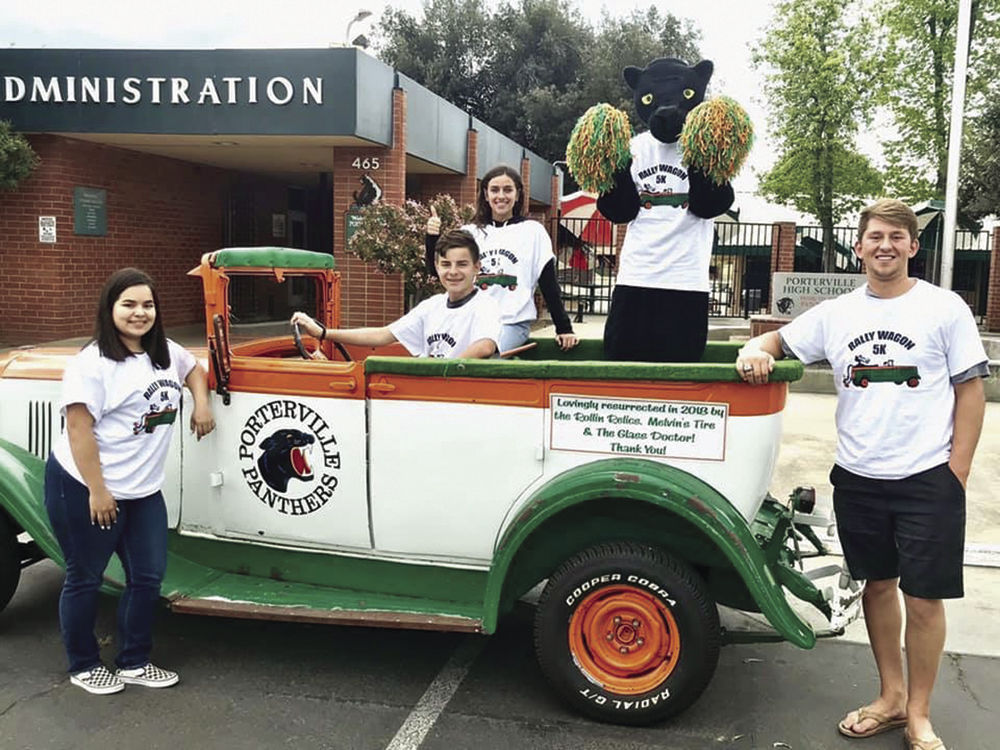 Porterville High School students pose with the school's Rally Wagon. The PHS Alumni Association is holding a 5K Fun Run and Walk Sunday to raise money for the maintenance of the vehicle and for senior scholarships. From left to right Marianna Rios, Richard Zedda, Abigail Zedda, Porter Rance Alviso (Mascot) and Josh Halopoff. 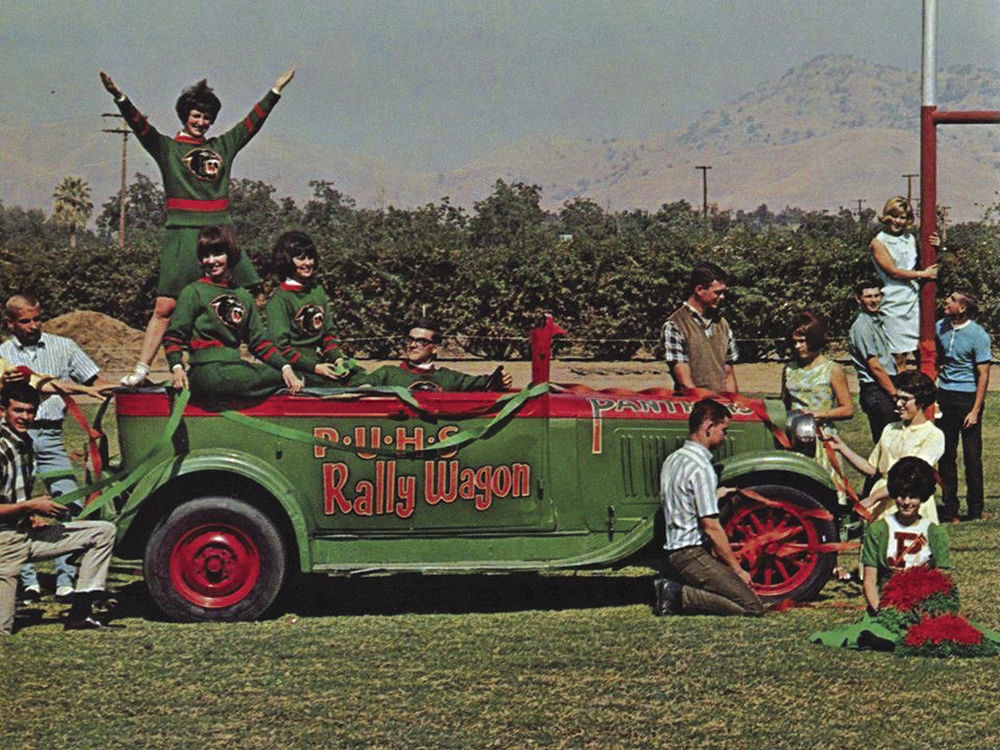 In this photo from the early 1960s, Porterville Union High School students pose with the Rally Wagon.

Porterville High School students pose with the school's Rally Wagon. The PHS Alumni Association is holding a 5K Fun Run and Walk Sunday to raise money for the maintenance of the vehicle and for senior scholarships. From left to right Marianna Rios, Richard Zedda, Abigail Zedda, Porter Rance Alviso (Mascot) and Josh Halopoff.

In this photo from the early 1960s, Porterville Union High School students pose with the Rally Wagon.

PHS 5K fundraiser for Rally Wagon and scholarships is Sunday

The tricolored 1928 Dodge Victory 6 pops with a vibrant orange covering the hood and extending to the back of the car. A darker green anchors the bottom of the car while the white in the middle allows for the Porterville Panther logo to stand out and give life to an image of a growling panther.

But just like it’s a symbol of school spirit, it’s also a symbol of a community coming together to keep memories alive and reestablish tradition.

A lot of people and work went into getting the Rally Wagon up and running last year, and to honor its restoration, the PHS Alumni Association is holding its first Rally Wagon 5K Fun Run and Walk at Porterville Sports Complex this Sunday (May 15). All funds will be directed towards the maintenance of the Rally Wagon and a scholarship for seniors.

The race starts at 7:30 a.m. with race day registration beginning at 6:30 a.m. Individuals can sign up prior to race day online at RunSignUp.com or in person at the school. The price is $20 for runners and walkers, $10 for students and veterans, and a $5 increase for those signing up on the day of the event. Payment is accepted in cash or money order only.

“During the 60’s and 70’s the Rally Wagon was used extensively in high school rallies and serpentine caravans from the administration parking lot to the football games at Jamison Stadium,” Pixler said. “Cheerleaders packed the Rally Wagon and a line of cars were decorated in orange and green for the Friday event.”

Getting the Rally Wagon back in regular use for the student body is one of Pixler’s main goals as president of the alumni association.

The call that it was ready to go came on the day of Porterville’s Homecoming football game and the Rally Wagon made its first appearance in years. Since then the Rally Wagon has been at three football games, three class reunions, the first PHS Basketball Meet and Greet and a Rotary Club luncheon. It’s also scheduled for four reunions this year.

“It’s fun,” Pixler said. “People come by and want their picture taken in it. When we took it to that first football game, all the Porterville High School cheerleaders were going ---cause they saw the Panther thing, ‘Is that ours?’. ‘Yeah it is. It belongs to your student body. It’s your rally wagon.’ It’s a very popular thing for anybody that graduated from Porterville.”

Several businesses and people have helped with the Rally Wagon’s restoration, including Ed Doyle of Terra Bella who repainted the car in 1996, The Glass Doctor who installed the new windshield, Micah McCrillis who made the magnetic signs and the Melvin family of Melvin’s Tire and Auto Service, who have done extensive repairs on the car, including getting a new carburetor so the car can start easier.

“I wanted to get it  running so the kids, Porterville could use it,” Pixler said. “Get it back on campus. If we could find a place to store it some other coach or something could take it to rallies or do rallies on campus, just bring it out there to the student center.”

Much isn’t known about how the car ended up at Porterville High School, other than it was used as early as 1954. Pixler asks that anyone with any information about the beginnings of the vehicle please contact the alumni association.