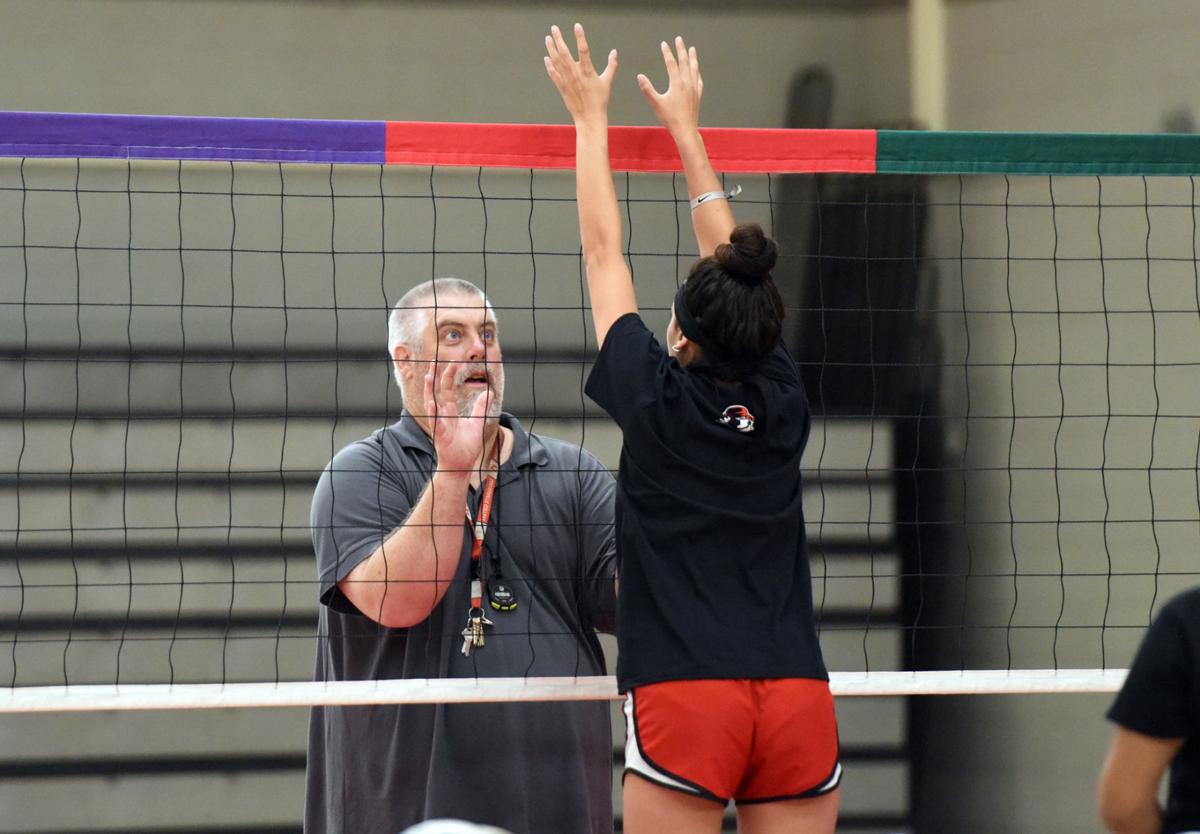 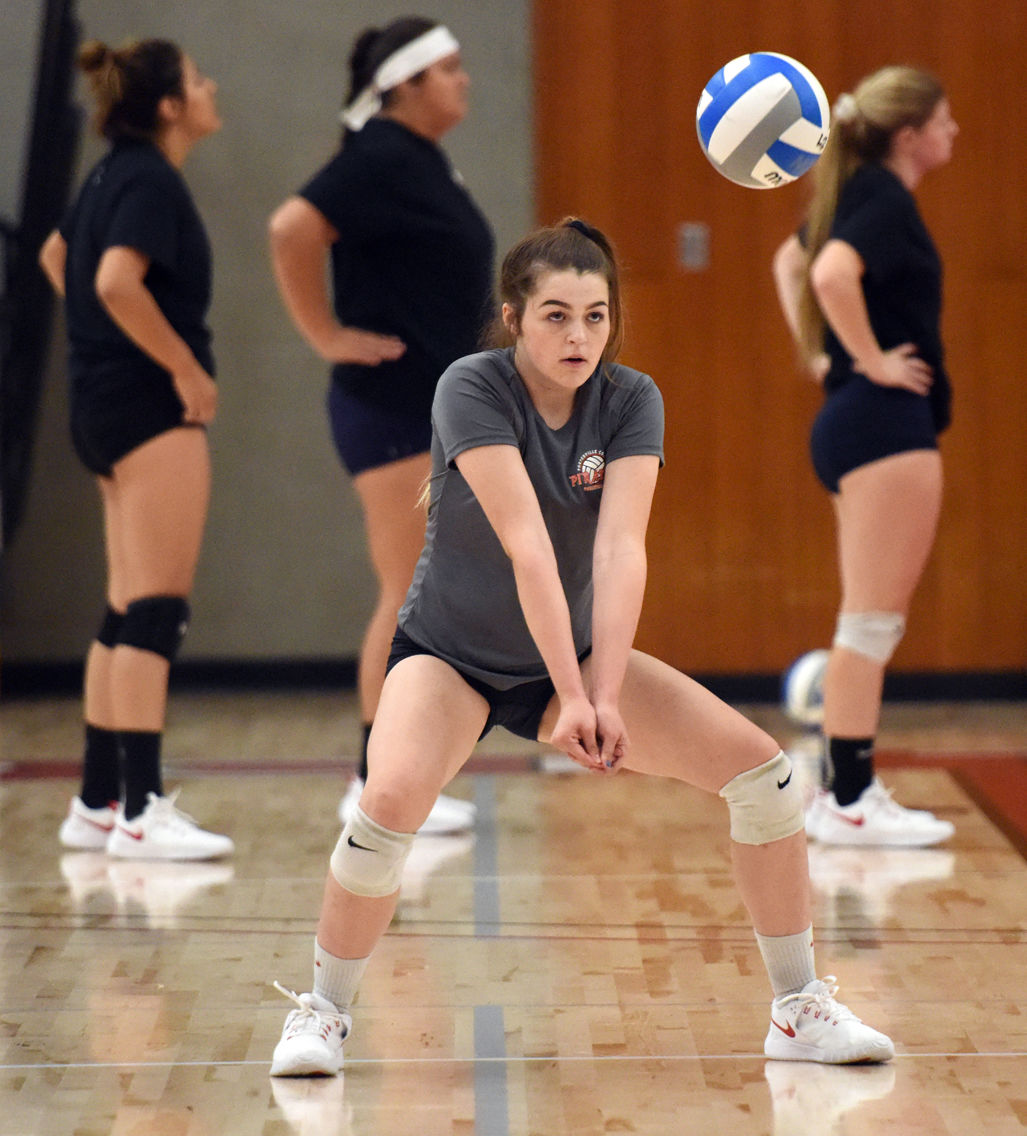 A new season begins for Porterville College and there seems to be a lot to look forward too this year.

The Lady Pirates were able to recruit height, talent and experience, which allows for a better start for third-year head coach Pete Rasmussen.

“Recruiting was a lot easier,” Rasmussen said. “People know us now, so we were able to get some really good athletes in. We got lucky on a few athletes that we didn’t know were coming so we were a little lucky there.”

Because of the Pirates getting a new gym floor, the team faces a tough road ahead with less than two weeks worth of practice under their belt. Games start for the team today with two at Monterey Peninsula College and then two more at College of Alameda on Saturday.

However, the Pirates already have their starting lineup which is made up of all freshmen and puts most of PC’s height on the floor. The starters are middle blockers Paige Borges (5-foot-7) and Kuea Angilau (6-2), opposite Jocelyn Sanchez (5-10), outside hitters Emily Kissick (5-9) and Madison Doty (5-10), and setter Jordan Castaneda (5-5).

“We do have several more athletes that have some size, so that helps since Fresno (City College has) a big team and (College of the Sequoias) has got a big team. It’s gonna be more of an equalizer this year,” Rasmussen said. Fresno has 12 players 5-foot-9 or taller while there are nine on COS’ roster.

In that starting lineup are three local players that should help bring the Pirates’ game up to the college level. Strathmore High’s Kissick, last season’s All-East Sequoia League’s MVP, provides a new back row threat while Borges (SHS) will be a constant in the front row. Monache’s Doty is a versatile player that can play anywhere on the court.

“With Doty playing the back row, and just like Emily Kissick’s in the back row, they offer us a back row attack that we never had before,” Rasmussen said. “So now we can spread the offense out and they can come right down the middle and we have some possible points. So that’s kind of nice.”

On Doty, Rasmussen said, “She’s probably my best middle but she is one of my better outside hitters. And she can play all the way around. So I think she’s enjoying the fact that she has the opportunity to play all the way around and she’s got the ability to do it. Which is tough because we have some defensive players that really can play defense.”

Rasmussen said the team wasn’t sure Borges was going to come but they’re happy that she did.

“She works so hard, that’s why I want her out there,” Rasmussen said. “She can easily play back row for me if I had to have her out there. She is doing better in the middle, she’s just working on her technique. She will be our middle blocker most of the time. She’s quick enough to get outside (but) a little undersized.”

Besides Borges, Kissick and Doty; other local players on the team are freshmen Makayla Trujillo (SHS), Katie Phillips (Porterville High) and sophomore Yvette Hernandez (PHS), who is one of three returners for PC.

The team bonded well in the summer with a handful of practices at the Porterville Military Academy but those weren’t enough to truly get them started for the season. Rasmussen believes these next three weeks of preseason will be key to getting them started off well when they open Central Valley Conference play at COS on Sept. 20 at 6 p.m.

“We’ve got three weeks until we start league and that’s my focus right now, getting us prepared for that point,” Rasmussen said. “The tournaments we’ve got coming up …. I don’t know that we have strong teams that we’re playing. We might have one or two. So hopefully we can have some success, even if we’re making mistakes.

“Our first league match is COS,” he continued. “So it’s like OK, here it comes. Let’s see what we can do, that’ll tell us. I think we can compete with them. It’s going to be, we have to get our offense going.”

Much of the offenses success may come to fall on Castaneda, the setter. Rasmussen wants to move from high sets outside to quicker sets in the middle and outside that are lower and faster, and also sets for back row hitters. It’s a lot but Rasumussen believes Castaneda can handle it.

“She’s quick, she can block,” Rasmussen said. “We’re going to see if she can handle it at this level. She’s got good hands….It’s a lot to take in, I think she will figure it out. It’s just going to take a little time. And hopefully three weeks is enough.”

Porterville finished last season 4-19 with a CVC record of 2-16. This season, Rasmussen is focused on a better outcome in CVC play and a possible trip to the playoffs.

“I’m putting us with COS and Fresno,” Rasmussen said. “Our goal is to beat them and I know it’s going to be tough.”