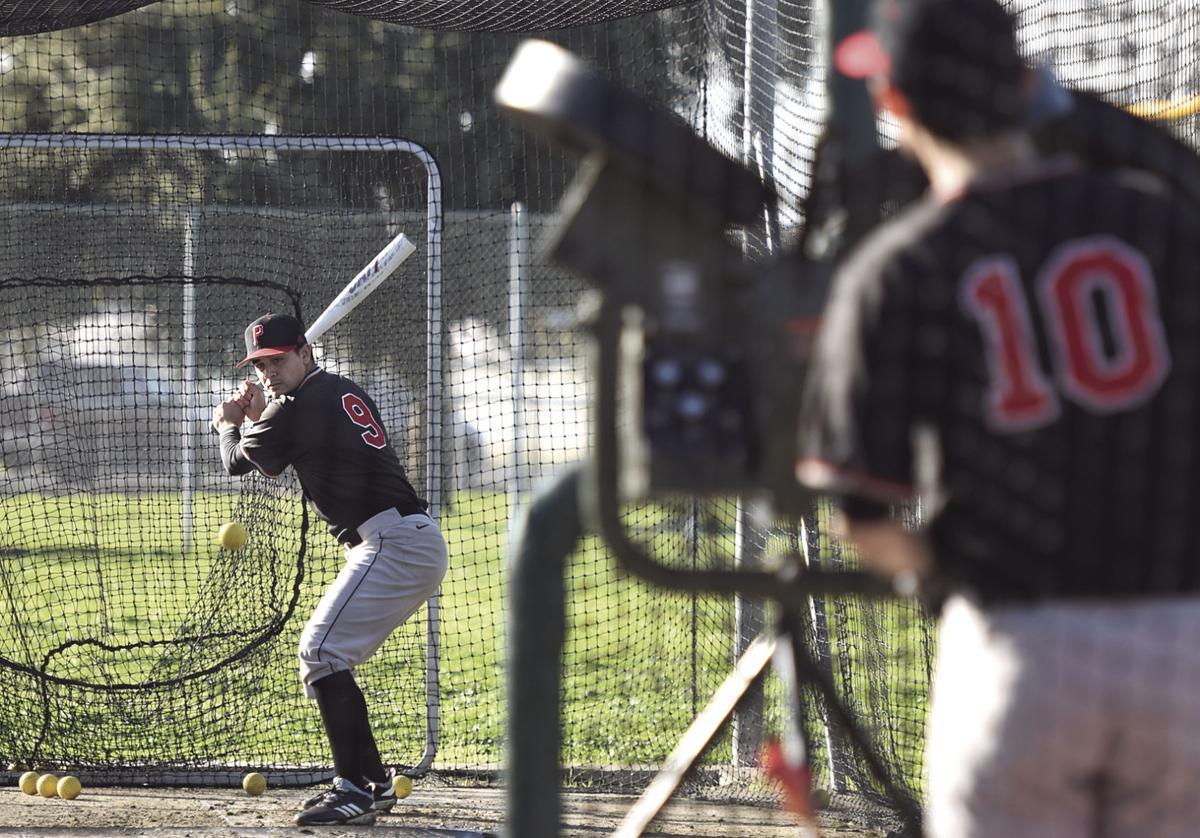 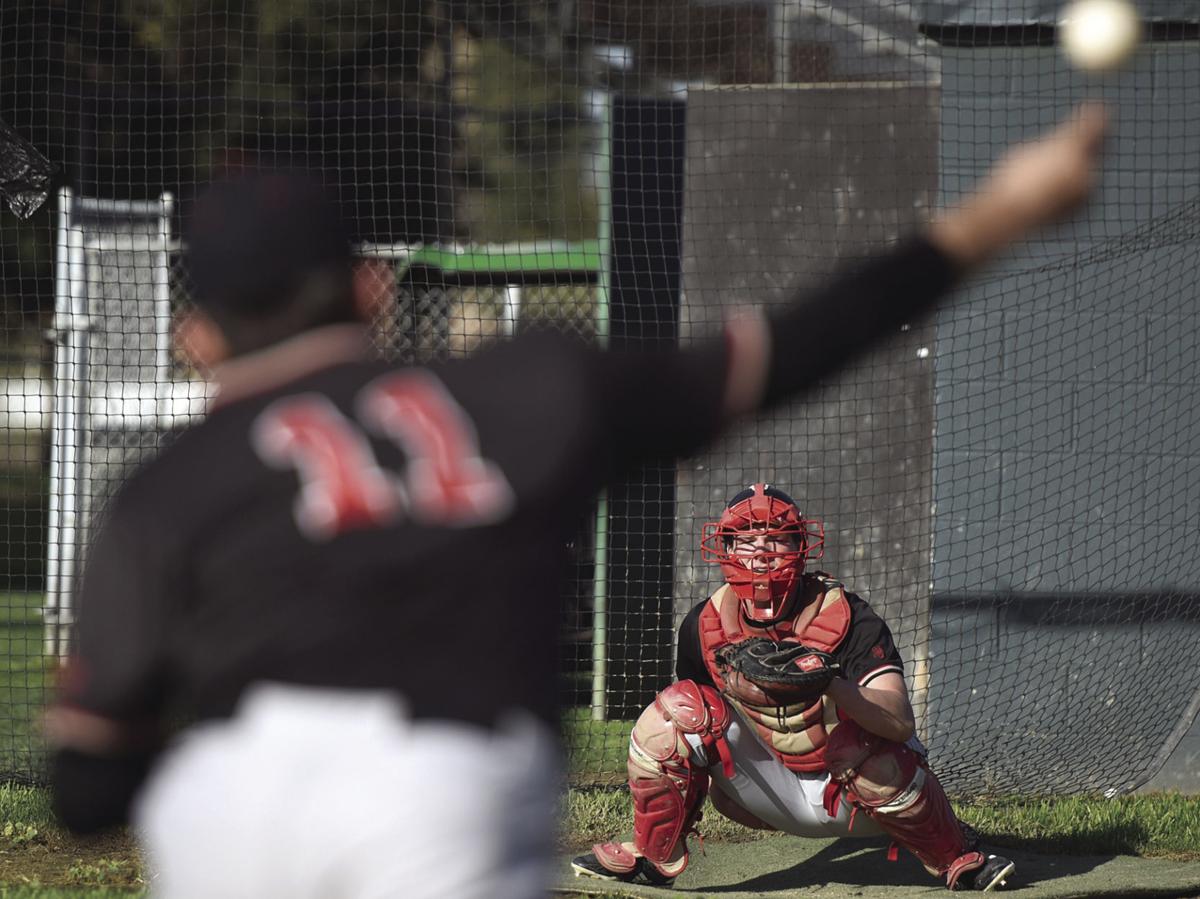 Porterville College baseball gets ready for the upcoming season Friday, Jan. 18. The Pirates open their season today against Lassen College at Pirate Stadium. Several players from the Orange Belt will be playing for the Pirates, including catcher Lane Page, a Monache High School graduate.

Porterville College baseball gets ready for the upcoming season Friday, Jan. 18. The Pirates open their season today against Lassen College at Pirate Stadium. Several players from the Orange Belt will be playing for the Pirates, including catcher Lane Page, a Monache High School graduate.

The crack of the bat and the pop of the glove are once again welcoming sounds around Porterville College as the Pirates open the baseball season with a three-game series against the Cougars of Lassen today at Pirates Stadium.

Today’s doubleheader features games at 11 a.m. and 2 p.m., with Porterville wrapping up the series Saturday with an 11 a.m. game.

The Pirates don’t begin Central Valley Conference play until March 5, when PC travels to Reedley but players are already geared up and ready to get the season started.

“We’re coming together real nice,” freshman third baseman, Garrett Behrens, said. “We’ve come a long way since the fall and everybody’s gelling together. … Everybody’s just ready to get going at this point. We’re all excited just to start playing and get games going.”

Behrens, who is from Olympia, Washington, is one of several out-of-state players PC head coach Rich Sorensen brought in to round out the Central Valley-heavy team. Seven Pirates also hail from local Orange Belt high schools.

“We love to keep the kids here but we also know that we need to recruit outside the area as well,” Sorensen said. “And we’ve done that. We’re much bigger, we’re much stronger, we’re much more athletic than we have been. So I think all in all, we’ll be a lot stronger. And they bought into the program that, you know what? We’ve got to pay attention to the small details and that’s exactly what they’ve been doing. They’ve been doing a real good job of that.”

Making up the infield alongside Behrens this season is freshman shortstop Chris Brandon (Hoover High) and sophomore second baseman, Isaiah Gomez (Porterville High). Gomez said he’s excited to be back after being forced to miss the end of Pirates season last year after dislocating and tearing ligaments in his ankle when he ran into a fence tracking down a fly ball.

“I’m just real excited,” Gomez said. “Like more than excited, I want to say. I’m just happy to be out here again. Having that injury, I thought I wasn’t even going to come out here and play. I didn’t think I was going to get the opportunity to step on the field again, so I’m just really, really excited to even be out here.”

On Brandon, Sorensen said, “We brought a toughness with Chris, everybody loves him, everybody respects him. We love his energy. And that’s something that we lacked at that position, is someone that takes a leadership role and you need to have that as a shortstop.”

Sorensen went on to say the infield is “going to be solid” and they’ll have options when it comes to first base with freshman switch hitter Jacobe Vargas (Redwood High) and Javian Smith (Louisiana), who can hit against left-handed pitchers.

On the mound the Pirates return sophomore Matt Cox (Las Vegas), Alfredo Vasquez (Lindsay High) and Nico Portillo (Corcoran High), who will make up the starting rotation, respectively. Last season Cox went 1-3 in nine appearances, had PC’s lowest ERA (3.95) and was fifth in strikeouts with 21, while Vasquez went 2-7 and was second in strikeouts with 22.

“All four of [starters] bring a maturity factor that a lot of the freshman don’t have yet,” Sorensen said. “That jump from high school to JC ball, it’s a big jump. So it’s always nice to have that sophomore experience on the mound. So I feel real confident with those four guys that are going to be competing in every game.”

One of the freshman feeling the difference between the two levels is Monache High graduate, catcher Lane Page. In his first season with the Pirates, Page said he is beginning to adjust to the velocity of junior college ball and will backup returning sophomore catcher Luis Martinez (Arizona).

On Martinez, Sorensen said, “He caught for us last year, big bulk of it. And he knows the pitchers, he works real well with them so we’re real excited with him coming back to the program.”

But while the infield is pretty much set for the Pirates, the outfield is still up for grabs with centerfielder, Leeland Crawford (Las Vegas), being the only player to emerge as a clear starter. Sorensen said the freshman was playing middle infield until they put him in the outfield for a practice and he proceeded to flag down every ball.

Hitting is also another area of concern for PC after they batted .213 as a team with an on-base percentage of .305. But Sorensen said he believes the team will have stronger bats with the addition of hitting coach, Ike Guerrero.

“He brings a whole different technology to it,” Sorensen said. “So he’s really up to speed on the technology and the new wave of hitting, and our hitters have really improved. And they’ve really bought into what he’s been telling them. To them, they think it’s really great that he’s come in. He’s taking charge of that and he owns it. We do lot more video. He’ll email videos to everyone so they can see what they’re doing wrong. They’re talking about their swing, their stance and everything. They really have a good rapport with him. So he’s been a great addition.”

Porterville is coming off another rough season where they started on an 18-game losing streak and finished seventh in the eight-member CVC standings with a 5-16 CVC record while going 6-34 on the overall season. In his second year as head coach, Sorensen acknowledged that the team will have rough patches this year, but believes this year’s team has what it takes to get out of them faster.

“Quite honestly we might have a rough spot here or there, but I think what the makeup of this team is before we’d carry that for a couple of games,” Sorensen said. He added, “We know that we beat two playoff teams last year, Fresno City and Taft. And we know that our team this year is better than it was last year, so we know that we can compete with anybody in the state if we just: grind out at bats, field our position, mentally be in the game all the time. We know we can compete with anybody.”