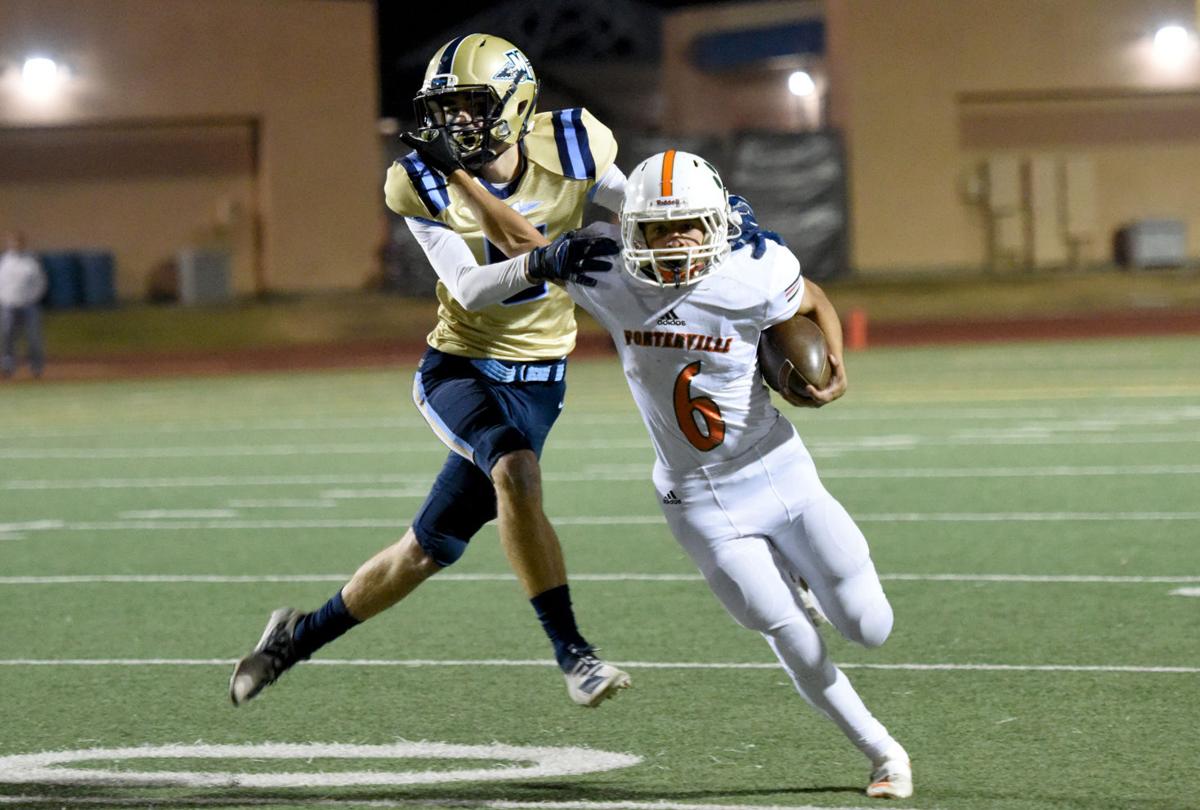 Porterville High School's Javier Benevidez (6) makes his way past Monache High School's Marcus Salazar (5) for more yards after a catch during the first half of the 51st Granite Bowl, Friday, Nov. 1, 2019, at Jacob Rankin Stadium. 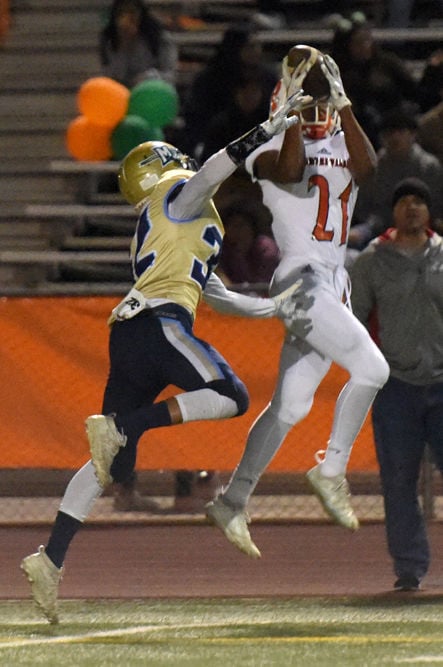 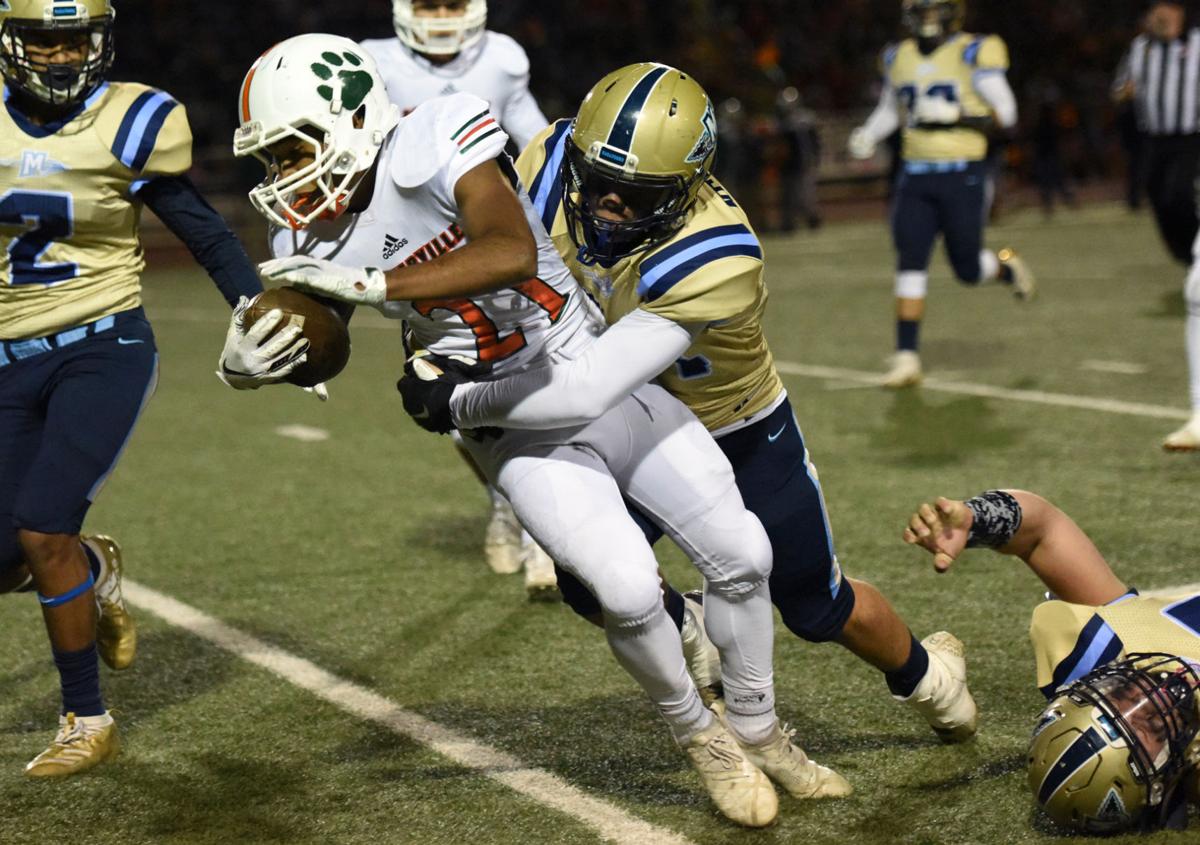 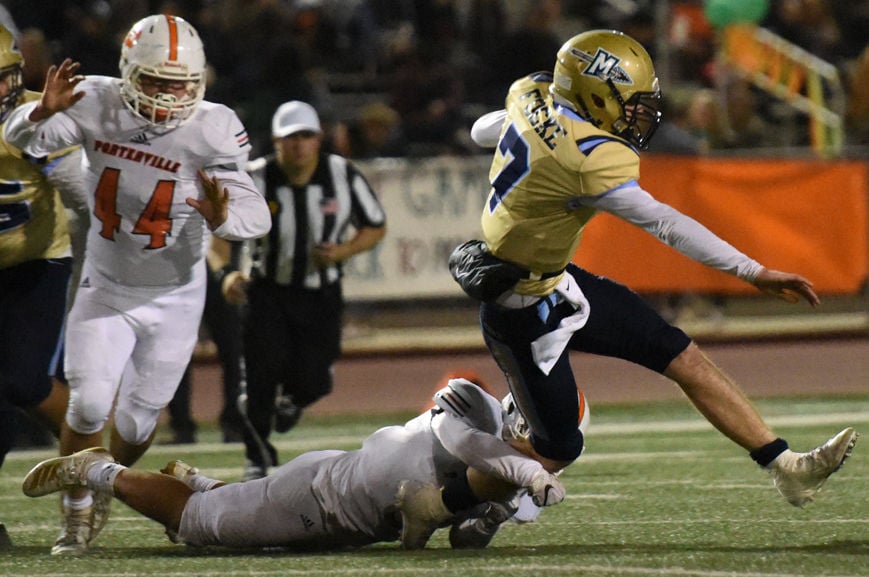 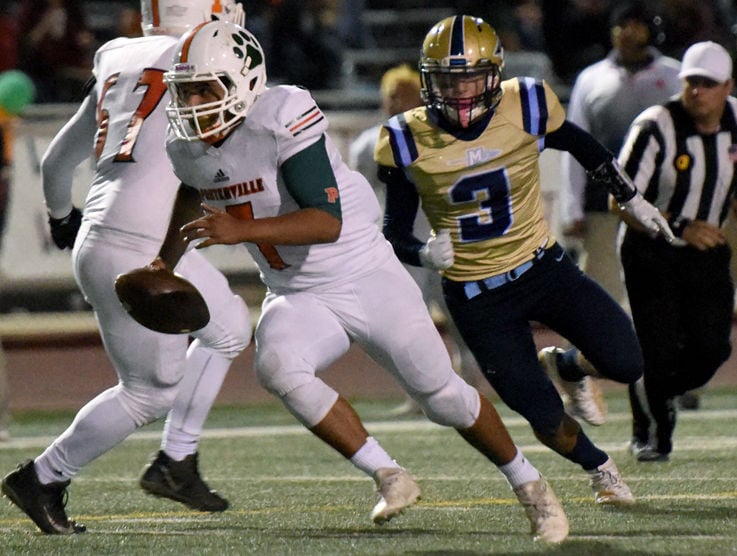 Porterville High School's Javier Benevidez (6) makes his way past Monache High School's Marcus Salazar (5) for more yards after a catch during the first half of the 51st Granite Bowl, Friday, Nov. 1, 2019, at Jacob Rankin Stadium.

Go ahead and paint the town orange and green because Porterville High School dominated the 51st annual Granite Bowl with a 61-6 demolishing of rival Monache.

From the first kickoff at Jacob Rankin Stadium to the last play of the game, the Panthers (6-4, 3-2 EYL) owned the Granite Bowl.

In the first half alone, Porterville scored seven touchdowns on a total of eight drives while giving up just one touchdown to the Marauders' Marcus Salazar in the first quarter.

The Panthers set the tempo early by finishing their first drive with a 4-yard touchdown run by quarterback Hector Nava Jr., recovering an onside kick and then scoring again on a 30-yard touchdown reception by Jovanie Cardenas from Nava Jr. They were successful on both two-point conversions to take a 16-0 lead.

“Overall it was a much better start than last year,” PHS head coach Michael Machado said. “We were down 20-7 last year, and we were up 16-0 (this time). So anytime you can take some of the emotion out of these types of games and reduce it down to just football then we felt like we had a pretty good shot tonight.”

There was plenty of emotion in the game with Monache (2-8, 1-4 EYL) needing to win the game for a spot in the CIF Central Section Division IV playoffs. Flags flew multiple times during drives for anything from encroachment on the defense to offsetting personal fouls.

But the penalties didn't dictate the game, the Panthers' defense did.

Salazar's 37-yard wide-open touchdown was the only time Monache truly caught Porterville off guard, but besides that, the Panthers limited the Marauders' star running back Aidan Galvan to short gains, flushed out quarterback Sullivan Focke with ease and kept wide receiver TrayVon Bradford off the stat sheet for most of the night.

“We played the run well like we usually do,” Machado said. “And we played the pass a little better tonight. We did have one blown coverage where they got the touchdown. But for the most part we were pretty happy with their performance overall.”

Offensively the Panthers could almost do no wrong with the team racking up touchdowns.

After their first two touchdowns, Isaiah Ellis made his way into the end zone with a 2-yard run and Nick Ward kicked the PAT to make the score 23-6 at the end of the first.

An interception by Isaak Guzman gave the Panthers the ball back and they scored again on a 21-yard touchdown catch by Ellis.

Porterville's final touchdown came in the third quarter on a 78-yard pass to Javier Benevidez but their final score was a 28-yard field goal by Ward who was 2-for-2 on PATs.

The Panthers now await the seeding meeting today to learn where they'll land in the Div. IV playoffs.

“We're going to be happy to go wherever we go,” Machado said. “And obviously, the entire 300 and last 50 days or so has been to get back to this point to make up for what we did last year in the playoffs. So we're here now and we have that opportunity to do that.”