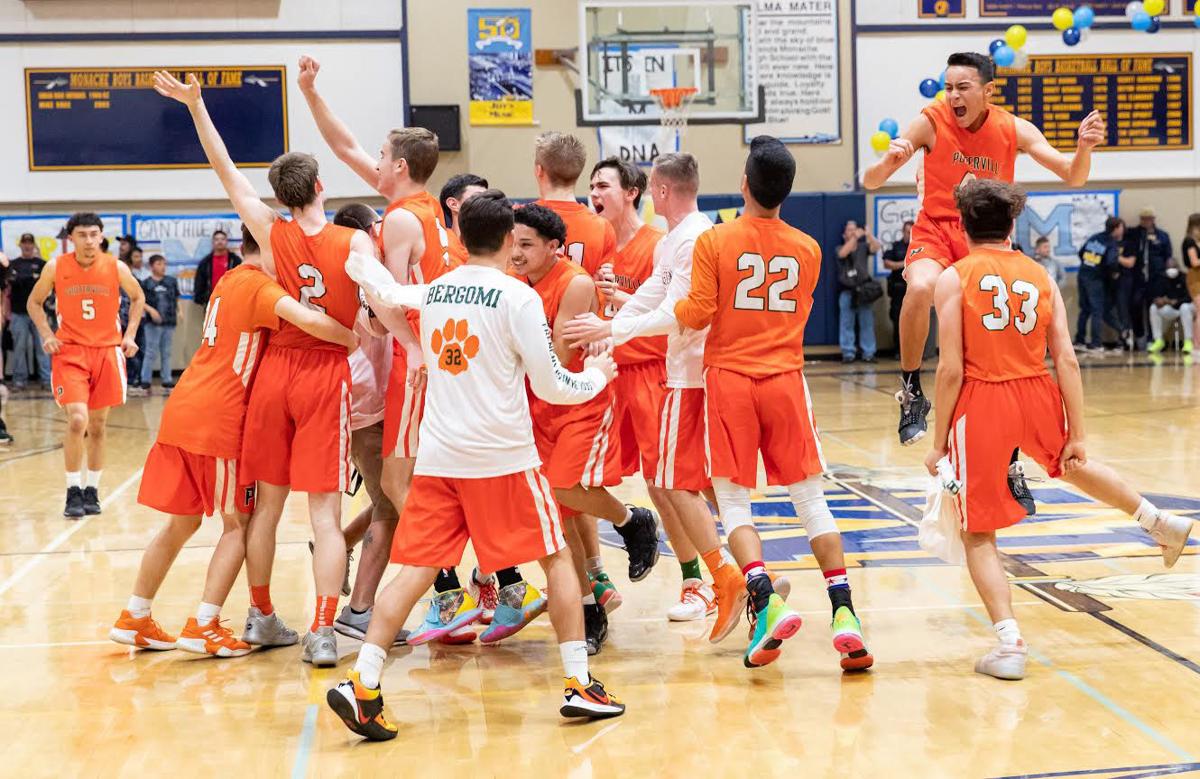 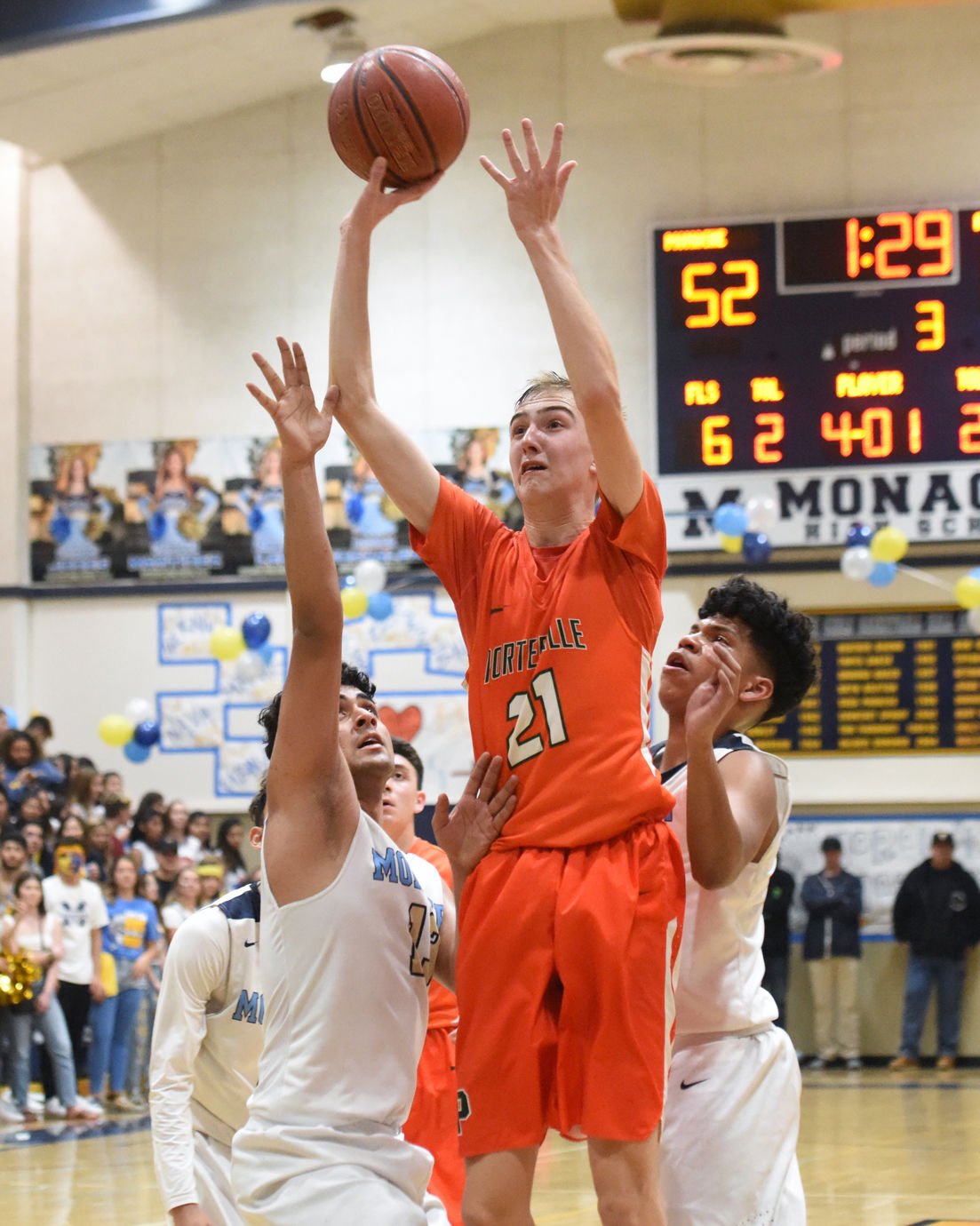 Porterville High School's Dane Odsather (21) goes up for a shot during the second half of a game against Monache High School, Wednesday, Feb. 12, 2020, at Monache.

Porterville High School's Dane Odsather (21) goes up for a shot during the second half of a game against Monache High School, Wednesday, Feb. 12, 2020, at Monache.

Porterville knocks off Monache in OT for EYL title

The Porterville High boys’ basketball team experienced every emotion under the sun, spread out over the final five quarters of the regular season.

Discouragement after a blown first-quarter lead. Frustration over a dog pile of travels, missed open shots and defensive lapses.

The one thing Porterville wasn’t in the mood for was sharing, something they won’t have to do after rallying to beat Monache 85-77 in overtime Wednesday to outright win the East Yosemite League title.

That’s right: no more sharing the trophy, like the Panthers did last season. For the first time in five seasons, the EYL has a one and only champion.

“I’m really proud of that,” Porterville coach Lance Wallace said. “We didn’t want to share it this time.”

They won’t have to, if only because of one senior who took the city’s bragging rights to the southwest side of Porterville: former Monache shooting guard Nash Wobrock, who transferred across town and put his new school over the top.

Wobrock overcame a slow start to score a game-high 28 points against his former teammates. Nine of those points came in overtime, where Porterville outscored the exhausted Marauders 14-6.

“Nash really took the game over in overtime,” Wallace said. “He was pressing a little too much at the start of game, maybe trying too hard.”

None of that mattered in the end. It was Wobrock, driving to the basket for two three-point plays — a hard layup for the foul, followed by the swish of the free throw. His five free throws in overtime all but sealed a victory that nearly never happened.

Monache stormed to a 54-47 lead through three quarters, with senior Marcus Salazar making the senior-night start and driving, jump-shooting and laying in 18 points.

The problem was, Monache fouled too often, and too soon. Seven players played with at least three fouls by the fourth quarter. Three starters played with four fouls. Starting guard TrayVon Bradford fouled out with 2 minutes, 20 seconds to play, leaving Monache without its most gifted ball handler.

Porterville had a clear height advantage under the basket, but was out hustled by the badgering Marauders throughout the game. Once Monache had no fouls to give, Wobrock and the Panthers asserted themselves without consequence.

Dane Odsather put up 15 of his 20 points in the second half, his 6-foot-5 frame working exclusively under the basket. Joseph Catalina imposed his 6-foot-6 frame in overtime with six points, again putting back offensive rebounds without rebuke.

Monache was simply gassed by the overtime period. The Marauders, who led 52-40 when Jalen Ballejos hit a falling-down 3-pointer with 2 minutes left in the third quarter, had its best chance to win in the final seconds of regulation.

Ballejos scored on consecutive 3-point plays for a 70-67 lead with 1:02 to play in the fourth quarter. Wobrock’s driving basket made it a 1-point game with 31 seconds left.

The Marauders would then miss three out of four free throws, and then watch Porterville force overtime when Odsather made two free throws with 4.2 seconds left to tie the game.

The tide was irreversibly turned. The boisterous Porterville student section threw their voices across the court to their Monache counterparts. Panthers fans began to leave the gym to cross town and catch the Porterville-Monache girls’ basketball game.

Wobrock always thought he’d win a league championship at Monache High. It just turns out he did it on this court for the visiting team.

“I just needed to be a leader for my team,” Wobrock said. “Our only goal coming in was to win the league title, and we did it.”