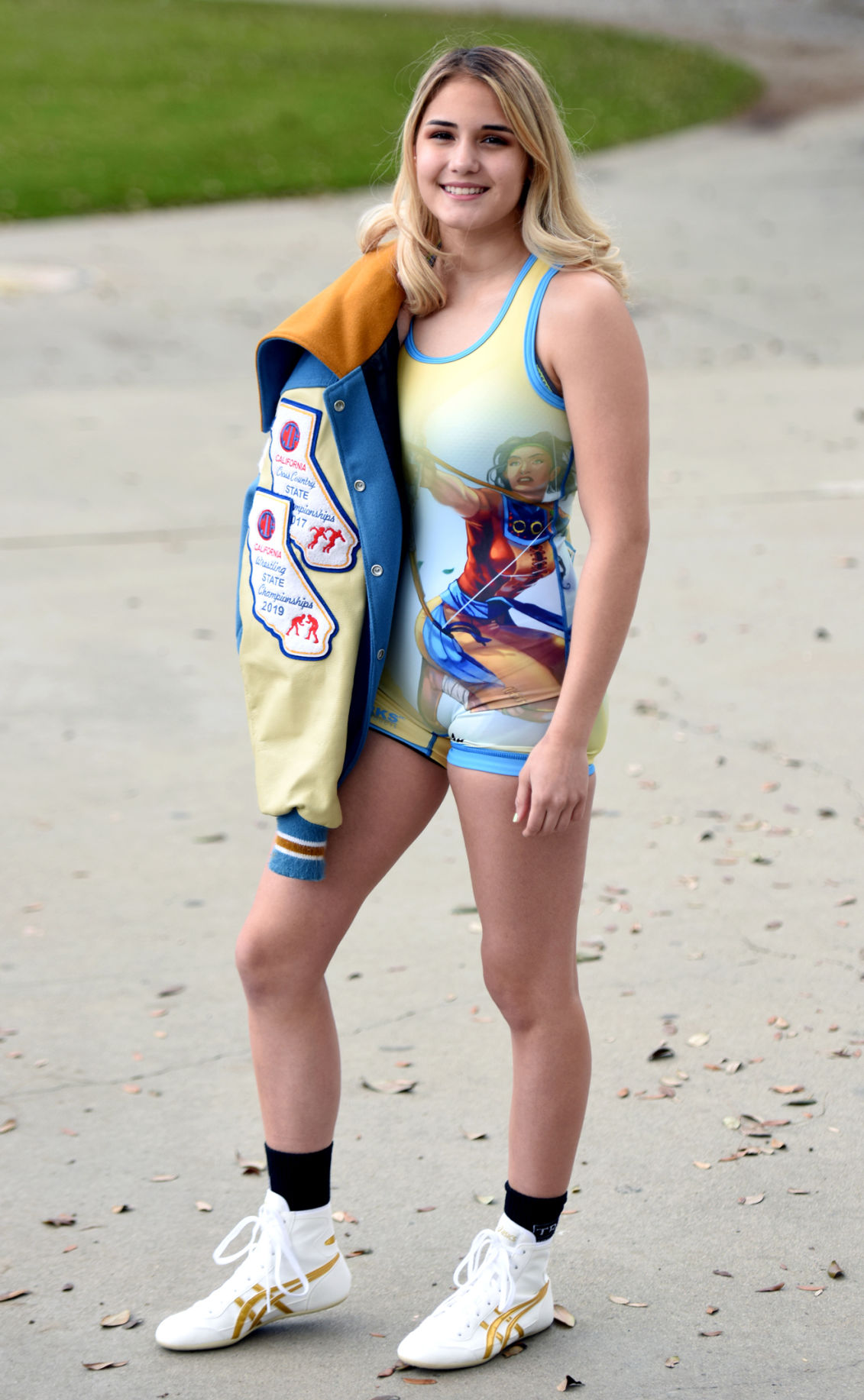 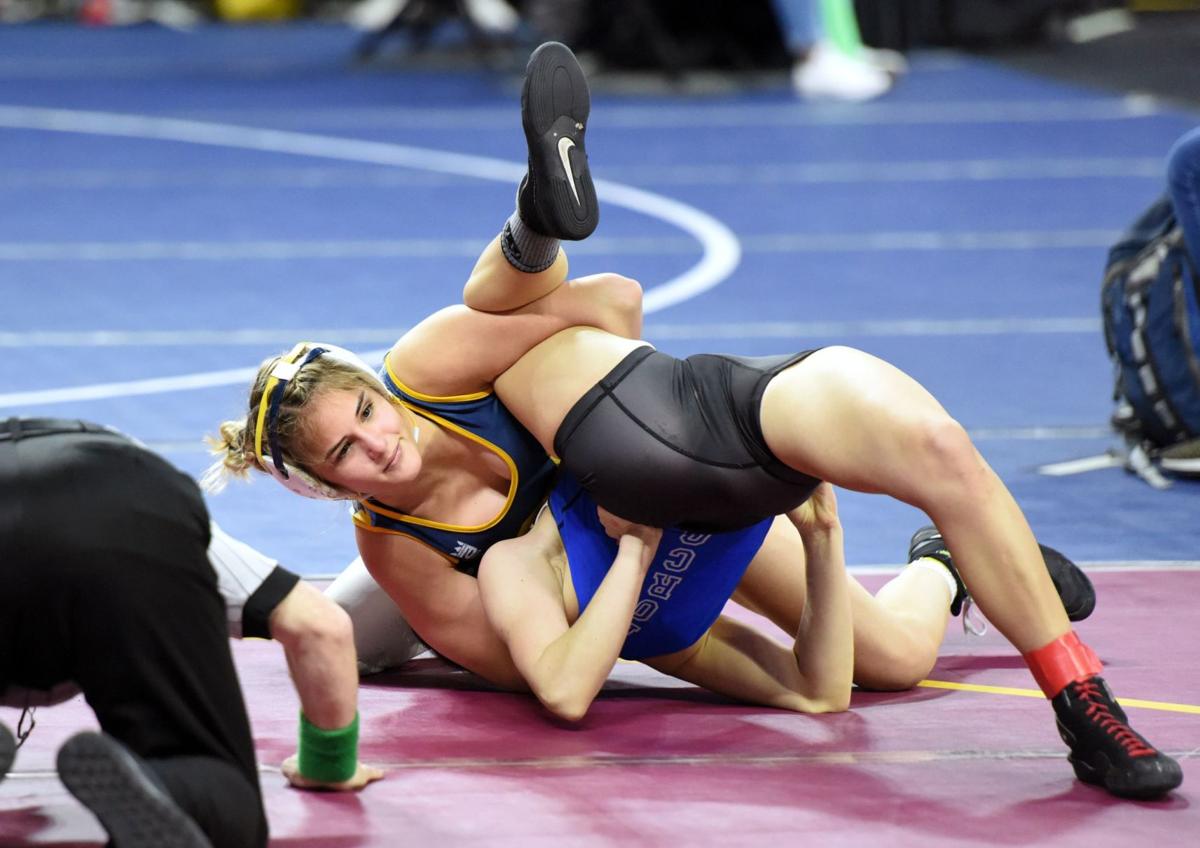 A test of faith: Monache junior overcame illness to take second at state

Charlotte Kouyoumtjian is nothing short of remarkable.

The Monache High School junior began making her case for the greatest female wrestler in school history before she even set foot on campus. But this season she showed everyone that the reason she is so great and so accomplished is because there is never a time when anyone can count her.

Battling a serious viral infection early in the season, Kouyoumtjian missed a chunk of the regular season only to return in a dominating fashion.

Guided by her faith, the 116-pound wrestler won every match and every title in the postseason leading up to the CIF State Championships. The two-time state qualifier continued to battle and earned a spot on the podium with a second-place finish after becoming the first-ever female Marauder to be a state finalist.

Finishing the season with a 33-2 record, Kouyoumtjian is of course The Recorder’s 2019-20 Orange Belt Girls Wrestler of the Year -- an award she received last season as well.

But this season and last season were completely different for Kouyoumtjian. And not just because she took second at state rather than third. But because she did so after becoming extremely ill.

“Charlotte tried to wrestle Dec. 21st at the West Coast TOC in Rocklin, but she just couldn't get through a particular match and we defaulted her out in the quarterfinals,” MHS head coach Jim Short said. “From there, we collectively decided she would not wrestle again until league which was approximately five weeks later.”

The decision wasn’t easy but it was necessary, because Kouyoumtjian had been sick for a long time. Since October, Kouyoumtjian had known something was wrong and after learning she’d contracted an infection that was affecting her health and ability to compete, her mom, Tina Kouyoumtjian, began preparing her for the worst.

“As a parent, I had to be optimistic and hopeful for my own sanity, but I also had to be realistic when talking to Charlotte about possible what-ifs,” Tina said. “I tried to prepare her for the possibility that her season may be over and that she would just have to wait until next season. I knew there was a 50/50 chance that she wouldn’t be able to return to the mat.

“But on the other hand, we were doing everything to try and get her healthy like eating clean, taking vitamins and supplements, probiotics and essential oils. I had faith that things were going to work out.”

Faith is also what Kouyoumtjian truly believes got her through everything and ready to wrestle with only 30 days to prepare before the state championship tournament.

“My faith was the only thing holding me together the entire season,” she said. “I had people telling me that I should take the year off and that I wasn’t the same wrestler that I used to be, so that’s when my faith really soared because I knew that I had to trust in God’s plan or I would prove those doubters right.”

Kouyoutmjian’s coaches expected things to be challenging for the wrestler’s restart but from the outside looking in, hardly anyone could tell Kouyoumtjian had ever been sick. That’s because she just couldn’t stop winning.

Ranked No. 1 in the Central Section and No. 2 in the state, Kouyoumtjian cruised through the East Yosemite League, Southeast Area and Central Section Masters championship tournaments, won all three titles for the second year in a row and earned a trip back to state.

“We knew, or thought, Charlotte would be challenged by a couple of girls in the Area and Masters tournament and that would help us wrestle our way into battle shape,” Short said. “We dominated a physical Foothill girl and easily controlled a very solid Redwood girl twice. We could see then that Charlotte was on track to do something special at the state meet.”

Seeded second for the state tournament, the two-time state qualifier competed worry free. In the first rounds she pinned Norco’s Valerie Powell in 47 seconds, then James Logan’s Carmella Foley in 40 seconds, to put herself in the quarterfinals.

“I was a lot more at ease and less worried about my matches because I reminded myself that it wasn’t my first rodeo,” she said. “Last year at state, I let my nerves get to me and I wasn’t going to let that happen again.”

Kouyoumtjian’s quarterfinals match against seventh-seed Berlin Kiddoo of Ramona didn’t go as fast as the first two but she still got a 5:42-fall to advance to a semifinal match against Del Oro’s third-seeded Elena Ivaldi.

The semifinals is where Kouyoumtjian lost to eventual state champion Monica Garcia last season, but this time around things went much differently.

“The semifinals were a lot different because I knew Ivaldi would be one of my toughest matches,” Kouyoumtjian said. “When I turned her, I knew I had to squeeze as tight as I could to get the match over with because it would have been very close.”

Kouyoumtjian pinned Ivaldi in 1:56 to get where no female Marauder had ever been before -- the state finals match. With the impact of everything she’d been through to get to the finals hitting her all at once, Kouyoumtjian let the tears fall just as the referee blew his whistle.

“When I heard the referee call the pin, I started crying because at that moment all the struggles I faced this season flooded my mind and I knew that I truly had a shot at becoming a state champion,” Kouyoutmjian said.

The tears continued to fall as Kouyoumtjian went to shake hands with everyone before finally reaching her coaches’ corner and leaping into Short’s arms.

“When Charlotte leapt into my arms after her semi finals win, it reminded me of the time (Monache’s Nathan) Timmerman won the state meet at 189 pounds in 2006, definitely déjà vu,” Short said.  “To see her humility and the realization that she had earned a trip to the finals in her tears was a very emotional and special moment for me. One I won't soon forget.”

From the stands, Tina also watched with pride.

“When Charlotte won her semifinals match and leapt into Coach Short’s arms so overwhelmed with joy, the only thing I felt was proud,” Tina said. “She had made it all the way to the state finals with half the mat time as her competition, that was so amazing to me.”

In the finals Kouyoumtjian lost her only match of the season in a 6-5 decision to fourth-seed Desinee Lopez of Folsom.

“First and foremost, no excuses; and let's remember Lopez is a formidable opponent making the finals herself for the second year in a row,” Short said. “It's a rare individual that can say they wrestled in the California state finals. Also, remember in California wrestling, there is no 1A, 2A, 3A or so on. If you make it to the finals match in California, unlike other states, you are one of  the two toughest girls or boys in all of California. That's something special in anyone's book.”

After the loss, Kouyoumtjian said that it sucked to lose and not accomplish her dream of being a state champion. But now looking back, she knows she gave it everything she could.

“I have a lot of thoughts about that final match, but I didn’t cry after that match because I knew I gave it everything I had,” she said. “I have a lot of regrets strategy-wise -- like giving up a stalling point and giving up a point with one second left -- but in that match I know there wasn’t a moment where I gave up.”

This season didn’t end the way Kouyoumtjian wanted it too, and while others can celebrate all of her wins, medals and titles; she isn’t satisfied. Now her focus is on not just being impossible to escape to help her win that elusive state championship, but she wants a world championship too.

However, if there’s one thing Kouyoumtjian can take pride in this season it’s that her faith in God never wavered.

“Looking back at this year I am not proud of any of my accomplishments in wrestling but more proud of my spiritual growth,” Kouyoutmjian said. “My faith in God became a lot stronger and I truly didn’t feel scared before any of my matches because I knew that God was taking care of me.”