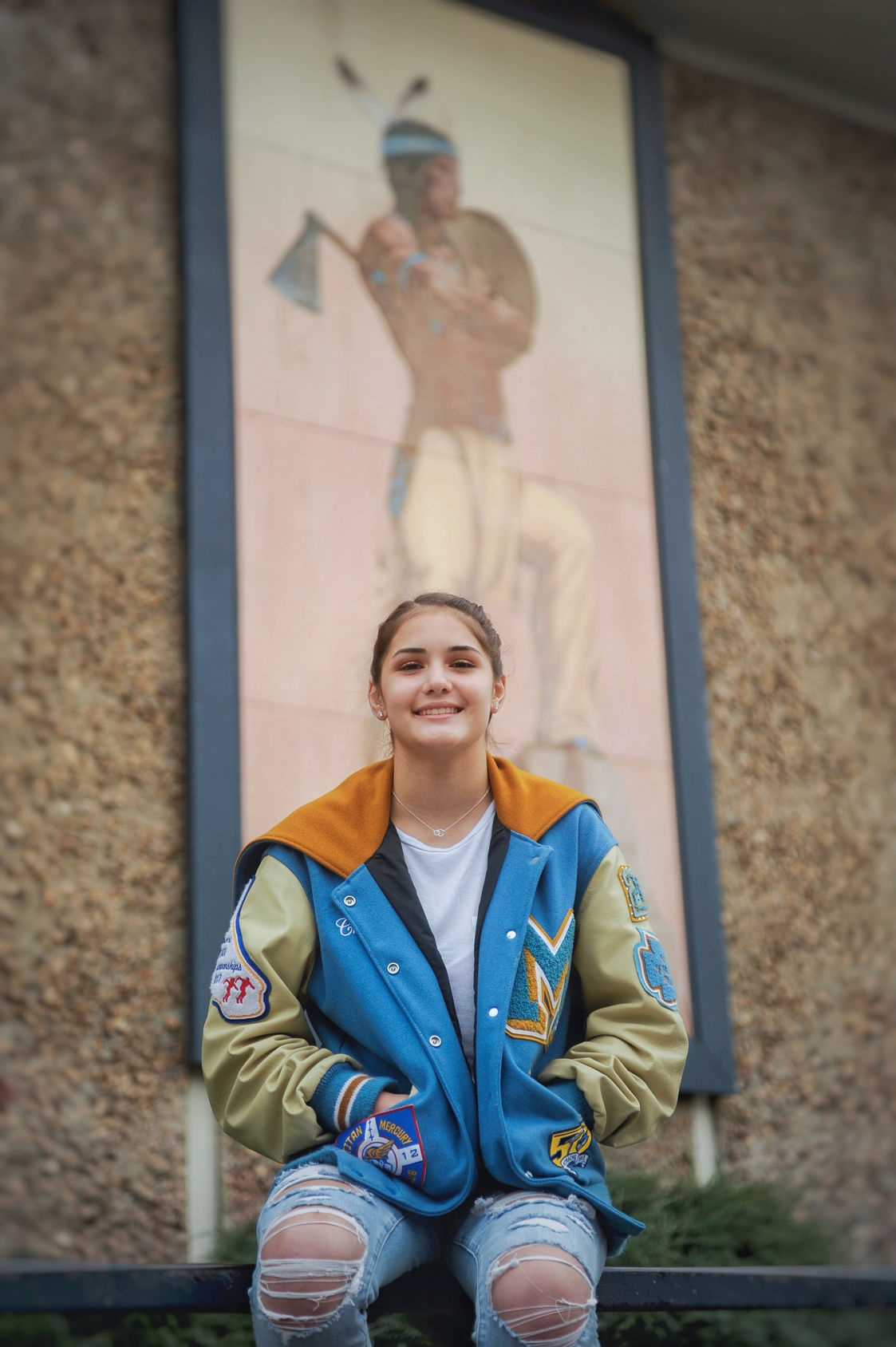 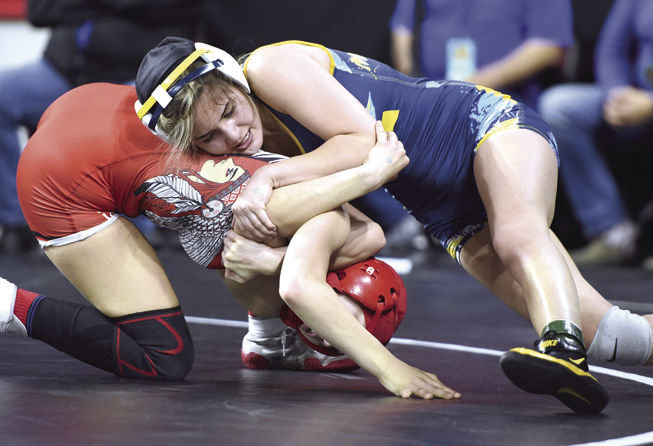 When Charlotte Kouyoumtjian graduates in 2021, she’ll likely do so as the best and most accomplished female wrestlers to come out of Monache High School to date.

But to limit her accomplishment to just the girls’ side would be a mistake. As only a sophomore, Kouyoutmjian is already a CIF State medalist and on track to becoming at least a three-time state qualifier, possibly a two-time state champion. She is also The Recorder’s 2018-19 Orange Belt Girls Wrestler of the Year.

“Charlotte is a great person, a great student, and an extremely tough competitor,” MHS head coach Jim Short said. “It’s my belief that Charlotte can and will accomplish whatever she puts her mind to. Her parents, Marty and Tina, are great people and have done a fabulous job instilling faith, integrity and values that Charlotte can draw upon for a lifetime. I’m just proud to be a small part of her support crew.”

Touted as a top wrestler even before she stepped foot on the mat in a Marauder singlet, it didn’t take long for Short to recognize what the program had in Kouyoumtjian.

“I knew Charlotte was special after she won the Tournament of Champions her freshman year,” Short said. “She was winning in every position and she beat a really tough girl from Nevada.  If my memory serves, I believe she never gave up a point for the entire tournament.”

Last season Kouyoumtjian went undefeated up until the end, where she missed qualifying for state after suffering two losses at the Central Section Masters tournament to the eventual 111-pound state champion and runner-up.

Not one to hang her head, Kouyoumtjian put the work in during the offseason and returned highly motivated for a better finish.

“Last season I was very disappointed with myself, and no one thought I was going to place [this season], probably because last year I didn’t even qualify,” Kouyoumtjian said. “I wanted to prove to them and myself that I was going to do more than just qualify for state and that I wanted to be in the top three.”

As early as last spring, Kouyoumtjian had already begun working her way towards a state championship. After becoming the Marauders’ first-ever California USA Wrestling Triple Crown Winner, she represented the state at the national level at the U.S. Marine Corps Junior and Cadet Nationals in Fargo, North Dakota. At Nationals, Kouyoumtjian took second in the Cadet division and placed top 12 in the Junior division.

Being on the national circuit allowed Kouyoumtjian to enjoy her wrestling, but when it came to the high school season she was focused and ready to go.

“In the offseason I don’t take it as seriously, but when the CIF season starts, I start dieting more and focusing on wrestling more,” Kouyoumtjian said. “I make it more of a priority.”

Making the move to the 116-pound weight class, Kouyoumtjian made easy work of her competition throughout the regular season.

“Charlotte is a competitor, she never backs down and wrestles to the whistle,” Short said about what makes Kouyoumtjian a tough opponent.

However, the ease with which she won helped, but also hurt, Kouyoumtjian. It helped because after essentially pinning her way to an East Yosemite League, Central Section Southeast Area and the school’s first-ever Grand Masters championships, she earned a fourth-seed for state.

But pins in under a minute and large margins of victory didn’t leave Kouyoumtjian with much to learn from either.

“Based on competition I felt unprepared, because I didn’t really have any close matches this year,” she said. “My only close match was probably with this girl at TOC and it was like 9-3. And that was my closest match. And then the other ones I lost. And I didn’t really feel prepared because my first postseason tournament, I barely won 5-4. So I didn’t feel prepared.”

Prior to state Kouyoumtjian got the competition she needed with her dad toughening her up in practice and providing the challenge she hadn’t previously received.

At state, Kouyoumtjian beat her first opponent 8-1 then pinned the next two, including fifth-seeded Rebecca Drown of Norco, in 38 seconds and 1:17, respectively, to reach the semifinals against top-seed Monica Garcia of Norte Vista.

“I had like so much pressure on myself to win and it was all I thought about,” Kouyoumtjian said. “I literally had nightmares about it, over and over that night.”

Against Garcia, Kouyoumtjian struggled. Unable to score a single point in the biggest match of her season, she went scoreless and lost 7-0.

“I’ve been thinking about that a lot. I know I was prepared physically for that,” Kouyoumtjian said. “Like I trained really hard — harder than I probably have before that match — but I know I lost on my mindset. And I know my mistakes weren’t really from the way I wrestled [but] the mindset I had in that match.

“I was wrestling not to lose, and I just know I need to make more mental adjustments, and most of the battle is won on the way I’m thinking in my head,” she added. “And even if I didn’t physically prepare [enough], your mind is going to go farther because your mind tells your body what to do.”

In the consolation rounds, Kouyoumtjian pinned Durham’s Kaiani Kenney (4:44) and finished Drown (1:13) off again in the third-place match to earn hers and Monache’s first state medal in girls’ competition.

On the season, Kouyoumtjian was 42-4 with two losses to Garcia and two to Selma’s Melanie Mendoza, who went up to the 121-pound class and placed fourth at state. Short called it a “banner year” and said he was “extremely proud” of Kouyoumtjian, but it took her some time to accept the how things ended.

“I still want first but there’s a lot of upsets at state,” she said. “When I feel bad for myself, [I remember] there were some really good wrestlers who weren’t even placing at state.”

But when your original goal was to win a championship, not just place, there’s no time to be complacent.

“My drive increases more,” Kouyoumtjian said. “Not because I medaled, but because I didn’t get what I wanted. I know since I medaled, I got closer to first place than I did last year. So I’m just like a place or two behind first. I know if I put in more work and if I fix my mental game that I should be there next year.”

Even though she’s accomplished so much for the Marauders’ program, especially the girls’ side, there’s plenty of unfinished business for Kouyoumtjian to attend too before she enjoys being the “first-ever” in anything; like winning a state title with an undefeated record, her goals for next season.

“I don’t want to make history for coming the farthest,” Kouyoumtjian said. “I want to win and set an example for the rest of the girls who are going to be coming in to shoot higher and set the bar a lot higher than most people do.”