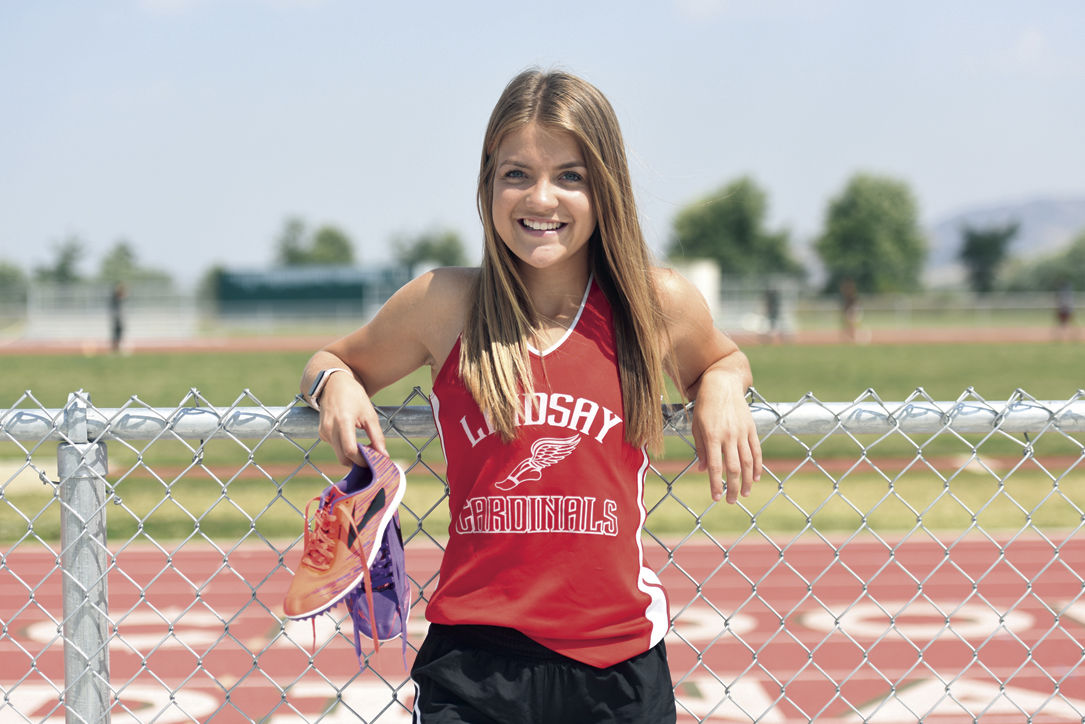 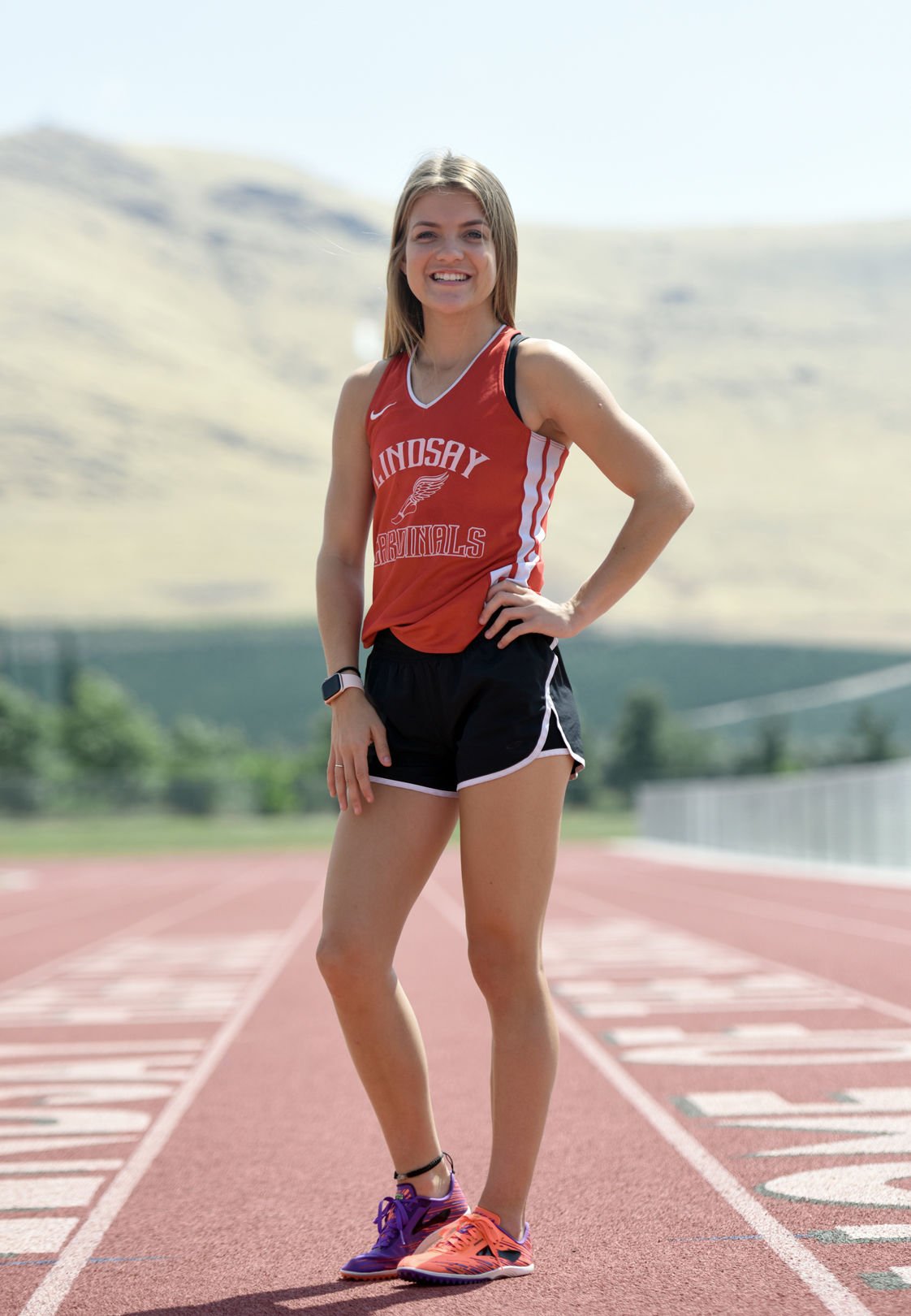 High school gyms across the state and the country have banners hanging from their walls and rafters, detailing the success of their athletic programs. But when it comes to the greatest runner in Lindsay High School history, the senior deserves one all to herself.

In this track season alone, she broke the Cardinals’ and the East Sequoia League’s records in three different events, won Area in two then medalled in both at Valley. She then ended her season by being one of only two area runners to qualify and compete at the CIF State Championship meet.

Her season, and her career, made her a no-brainer for The Recorder’s 2018-19 Orange Belt Girls Track and Field Athlete of the Year.

Caesar had a banner career for the Cardinals that also included her time in cross country. On the 5,000-kilometer course she went to three state championships, placed 10th at state for the school's highest finish ever and was The Recorder's back-to-back Orange Belt Cross Country Runner of the Year.

Combine her achievements with track and she holds every girls’ running record in school history, from the 100 meters to the two mile, according to LHS head coach Joe Dixon.

“McKaylie Caesar’s wins and records show that she is a phenomenal athlete and competitor,” Dixon said at a ceremony where Caesar was named Cardinal of the Year. “She obviously endeavors excellence in life. Without a doubt, her times are once in several generations for a high school runner. But, what the number of wins and records and scholarships don’t show, is how McKaylie went about achieving those wins and records.”

One of the most spectacular elements of Caesar’s story is her willingness to give it her all regardless of the circumstances, like when she fell ill just before the biggest meet of the season — the state championships.

“I always wanted to break 11 minutes for the [3,200] so doing it, and I wasn’t really expecting to do it, and by that much; it was a great feeling to know that I got my marks for both of my races and PR’d by so much,” Caesar said.

With the significant time drops, some would think Caesar might plateau before state but she said she still believed faster times were coming.

Along with consistency in her training, Caesar had a bit of a secret weapon also helping her reach those times — her dad.

“At the beginning of the season, I invited MC's dad John Caesar, a great coach, to be her primary coach in track,” Dixon said. “I did this because his overall knowledge of her career and training and the opportunity to close out their life chapter together.

“In a nutshell, Coach Caesar's philosophy was all about a balance of easy runs with high intensity days that encompassed time in the weight room and week to week consistency," Dixon said. "That with a daily dose of dad's motivation and dedication to diet.”

But all of McKaylie Caesar’s hard work almost came to a standstill in the final week when she caught a fever just before the state meet.

“It was really heartbreaking actually cause the week before state I was so excited and I was just ready to compete at state because I did so well the past meets,” Caesar said. “Then I was super excited because I [would’ve] hopefully PR-ed again if I was healthier. And then getting sick it was a heartbreaker. I was really sad about it but I knew I just had to compete to my best. Just give it my all and kind of get that off my mind even though the feeling was always there.”

Despite not being at her healthiest, Caesar finished with a time of 11:05.27 — her second best time of the season — to place 23rd.

“MC pulled off a Michael Jordan [‘Flu Game’]-like performance really,” Dixon said. “I knew she would perform well, because her mental strength is really what separates her from the other equally fit and talented runners out there.”

Caesar is definitely one of the most impressive runners to come out of not only Lindsay or the Valley, but the state and the entire country. She fought for her life as a baby and runs with a 70 percent developed lung, but nothing has stopped her.

Putting racing shoes on for the first time her sophomore year as a favor to her older sister, who needed someone to fill in for a race, it’s amazing to see how far Caesar’s come and what she’s accomplished.

“Coming into high school I never expected to be where I am so it was really unexpected to get this blessing,” Caesar said. “I think I blew out my expectations for myself because I never really had any ... But I put in all the hard work that I could, and I just achieved as much as I could, so I’m excited with what I left behind.”

Humble and thankful in all that she does, Caesar earned an opportunity to continue her track and cross country career at California State University, Fullerton — an NCAA Division I program — on a full-ride scholarship beginning next fall.

Dixon, who also competed in track and cross country in college, said he believes Caesar will be successful at the collegiate level because she has leadership qualities that keep her from allowing ego or lack of confidence to hold her back.

“Leaders of [college] teams … were all well trained, patient, confident, raced against themselves, and had that [Steve] Prefontaine quality of being able to push through pain on multiple occasions during training or racing,” Dixon said. “MC has all the qualities.”

Before all the praise used to make her squirm. Now the GOAT — the greatest of all time — speaks confidently, embracing the title of “greatest ever” and adding that she hoped she inspired others to do, and be, better.

“I just feel so blessed to be in the position that I am and have everyone tell me that,” Caesar said. “But I just know that it shows that hard work does pay off and I’m so glad for all the effort that I put into running because I’m just so blessed to have running. But I hope that someday, and hopefully soon, people start breaking my times and our team feels stronger and better.”