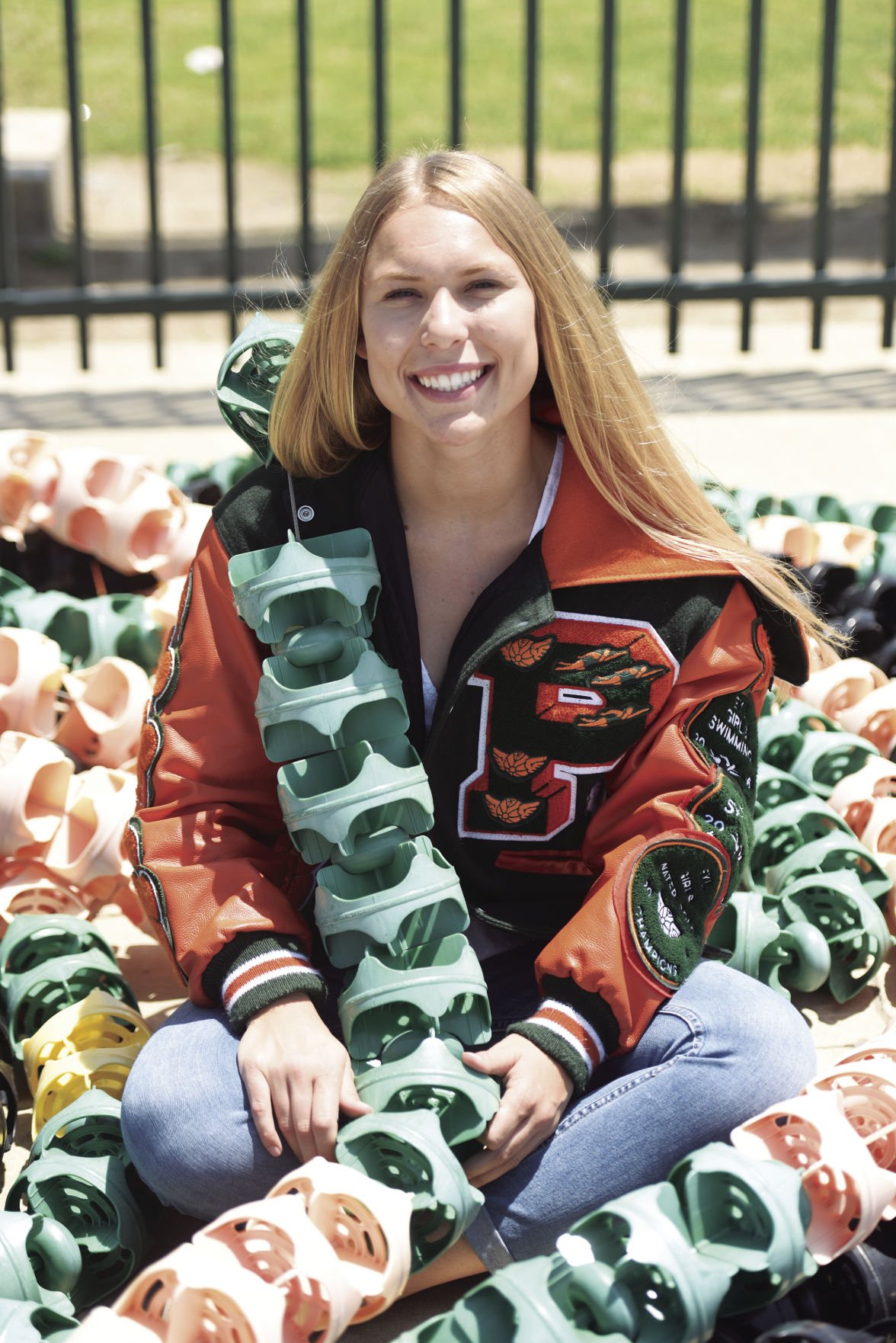 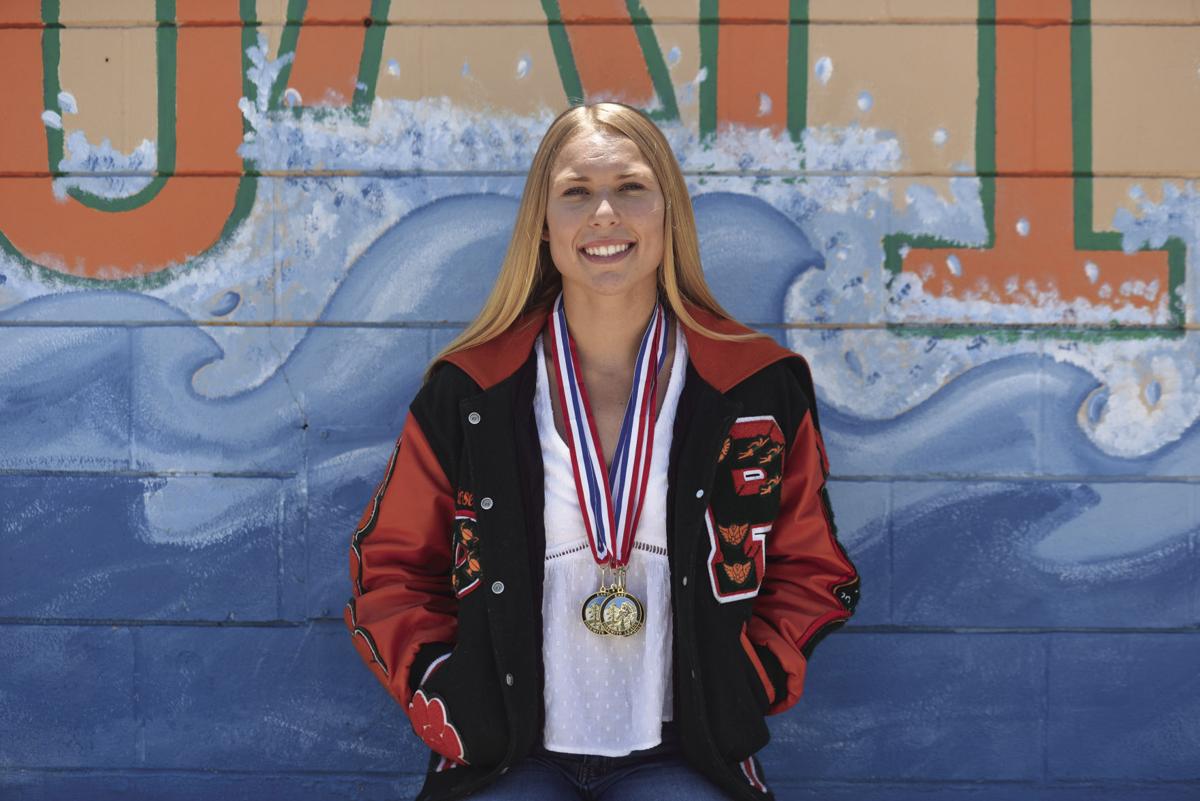 ‘A class of her own’: Porterville’s Rosemary Chapman won a Valley title and broke the PHS girls 100 butterfly record

The senior has dominated aquatic sports at Porterville High School for the past three years and this season was no different.

Chapman broke the girls program’s oldest record in the 100-yard butterfly, was the only individual girls swimmer to advance to the CIF Central Section final rounds from the area and also helped the Panthers win the Division II Valley 400 freestyle relay title.

For the third, and final, year in a row, Chapman is The Recorder’s 2018-19 Orange Belt Girls Swimmer of the Year.

Fresh off a remarkable water polo season where she won her first Valley title with the Panthers and was selected the Orange Belt Girls Water Polo Player of the Year, all attention turned to beating Nancy Clarke’s 1986 100-fly record time of 1 minute and 1.32 seconds.

Chapman was within reach last season but finished just .04 seconds off at Valley. This season she continued to go full steam at the record to prove to herself how much faster she was swimming.

“Yeah, pretty much just improving as an overall swimmer was my goal,” Chapman said. “But to prove to myself that I became a better swimmer, I focused on the record because that would show me that I was actually getting faster. By meeting that time standard.”

It took nearly the entire season but Chapman finally broke the record at the East Yosemite League championship meet. Unable to see the scoreboard from the wall, it took her and the fans a second to realize what had happened.

“I [thought] I didn’t get it because I was expecting cheering or something if I broke it,” she said. “My mom and dad were hoping that I’d get it this meet so they said, ‘Oh, we're going to go crazy if you get it.’ And no one clapped or anything so I was like ‘Oh so sad. Another meet I didn’t get it, maybe Valley.’ Then all of a sudden, at the same time I saw it, everyone started clapping and it was crazy.”

One of the first to congratulate Chapman was PHS head coach, Richard Taylor, who was excited to see her accomplish her dream.

“I was just ecstatic,” Taylor said. “I was so excited for her. I was so glad that she got that off the plate. In other words, she accomplished that and it was something she could check off. It’s not hanging over your head trying to do that. … I know the pain you go through when you get so close but don’t make it. So I was glad that she did it, I was just thrilled for her.”

Her accomplishment didn’t set in until she was standing on the podium with the new school record of 1:00.84. And even then she still surprised at just how fast she swam.

“It was a one-double [zero], which I was just trying to get a 1:01,” Chapman said. “That was my goal, to get 1:01.20 or something just to break that record by a little bit but I ended up getting a whole second, almost, under it which is really exciting.”

Chapman said that regardless of how hard you work, you usually gain some time in the offseason. She started the season around 1:03 and said that it only got harder and harder to drop time because most experienced swimmers know the faster you get, the harder it is to drop.

“Once you get to a certain point, it’s really, really hard to break that wall down and get past that time,” Chapman said. “You have to get stronger, it’s not just about swimming anymore. You have to start working out, you have to work on what you’re eating, that kind of stuff. Coach Taylor was really good about helping us, taking us to the weight room and getting stronger.”

Getting to Valley was a lot harder this season with the Central Section combining the Div. I and Div. II meets into one in Clovis West. The setup made it difficult for swimmers to advance to the final rounds but Chapman as an individual and her teammates on the 400 free — junior Alyssa Bodoh, freshman Claire Lee and senior Shyanne Rainey — all made it to the final day.

Chapman accomplished her goal of placing top three at Valley by taking third in the 100 fly (1:03.27) but she and Taylor both said that she tapered too early and possibly could have swam a faster time.

“I was expecting better,” Chapman said. “I always have high expectations for myself, I’m very competitive. I’m a self-motivating kind of person. And I wanted to do better but I was just happy to be there. It was so cool to be at the Div. I CIF swim meet. And then relay did really good.”

The Panthers dropped seven seconds off their 400 free time in the qualifying rounds to advance to the finals. In the finals, they outdid themselves again by shedding three more seconds off for a first-place time of 3:49.07 — less than a second off the school record time of 3:48.50.

“There were two [Div. II] teams that were ahead of us,” Chapman said. “We thought that’s cool, we can get third and medal. ... In lane six was Selma, the team we needed to beat. It was really close but we out touched them. But we didn’t even know it was happening!”

It was an incredible finish to an impressive career for Chapman, who is one of the few athletes to be a two-time Valley champion and eight-time EYL champion when you combine her water polo and swim team titles.

“She’s quite in a class of her own up there,” Taylor said. “There’s only been a couple of others I know ... She is definitely a great swimmer and with swimming she broke the oldest record in the book, I think it was 33 years old. I’m so proud of her for doing that. It was a dream. All four years she’s been wanting to break that record so I’m glad she got it.”

Chapman has yet to see her name along the other record setter’s but she knows what having her name in there means.

“And I hope that I can inspire some girls that come into high school to want to beat my record,” Chapman said. “‘Oh who’s Rosemary Chapman? I want to beat her record.’ That kind of thing. Which I think it’ll probably happen soon because Claire Lee is crazy fast and I’m sure she’ll break by the end of the four years but I hope it’ll be there at least one year.”

Athletes like Chapman are few and far between at any level or in any sport. But they’re always remembered for more than their awards and records because it’s their character and personality that make them someone everyone wants on their team.

“Rosemary is just one of those special athletes that you get once or twice in a lifetime,” Taylor said. “She is the sweetest girl, and works so hard, and is so nice to everybody. It’s been a pleasure to have her on the team.

“She has been our anchor for our team for the last four years and I wish her the best in college,” Taylor said. “I hope everything works out well for her.”

A new chapter of Chapman’s athletic career begins next season with her first year of water polo at Fresno Pacific University. But the last four years created unforgettable memories and connections with teammates, and Chapman hopes she can make similar bonds in college.

“These people are definitely going to stick with me through college,” Chapman said. “And hopefully I get to know a lot of people on the [FPU] team and I get to have the bond that I had with these girls.