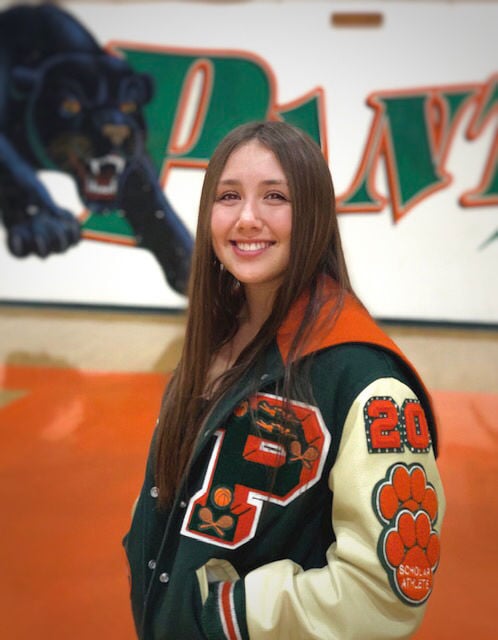 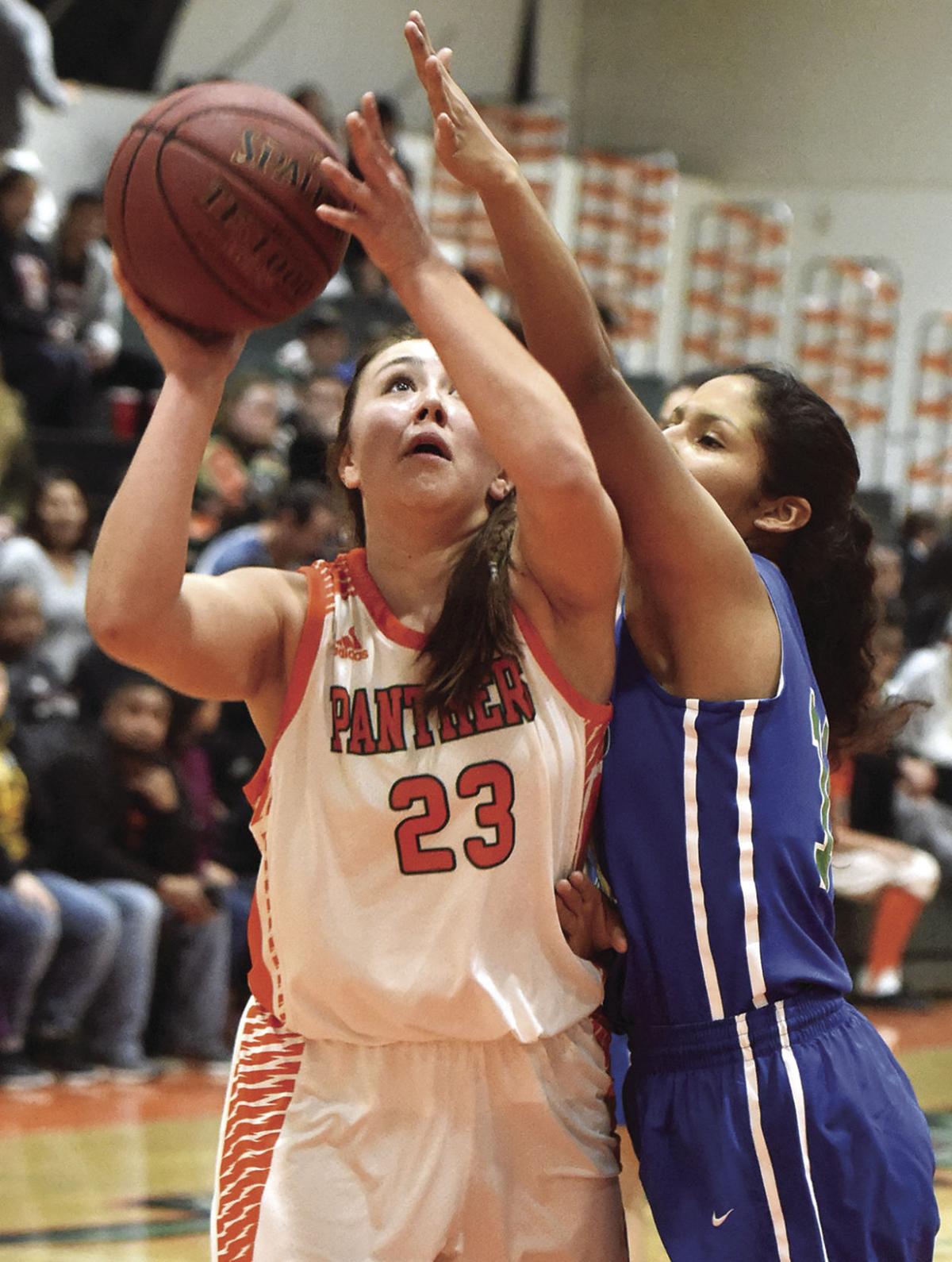 Porterville High School's Jewelia Maniss, left, takes it to the hoop Tuesday, Feb. 12, 2019 during the first half of an opening round game against Highland High School in the CIF Central Section Division IV playoffs.

Porterville High School's Jewelia Maniss, left, takes it to the hoop Tuesday, Feb. 12, 2019 during the first half of an opening round game against Highland High School in the CIF Central Section Division IV playoffs.

Listed at 5-foot-7, Porterville High School’s Jewelia Maniss is obviously not the tallest player on the Panthers’ girls basketball team. She’s not even the second tallest.

But by pulling double duty as a forward and guard, Maniss became a serious threat to opponents in the paint. By controlling the center at times for Porterville, Maniss and the Panthers (27-6, 10-0 EYL) went on to win an unblemished East Yosemite League championship and make it back to their second-straight CIF State Division III playoff appearance.

A prime example of heart over height, Maniss is The Recorder’s 2018-19 Orange Belt Girls Basketball Player of the Year.

“Jewelia plays a lot bigger than her size and I checked the CIF rules to see if we can get a stretching machine and put her on like an old-fashioned rack,” PHS head coach David Kavern joked. “But it was against the CIF rules and I don’t want to break any rules.”

Despite her size, Maniss plays like a true post player with more fluidity than most at that position. She can get to the rim and pull up for an easy jumper whenever she needs too as well.

“It’s a combination of her intelligence, she can go by people if they’re on her tight but if they play off her she can hit the shot,” Kavern said. “I think that’s what makes her a very tough to guard.”

With everyone battling for control in the small rectangular space, Maniss is known to take a tumble or two in a game, rolling through a fall only to hustle down the court to get back on defense with a shake of her head and a laugh.

“I just try not to get intimidated by their size and play my game,” Maniss said. “But sometimes I do get pretty beat up cause I mean, some of them are huge compared to me. But yeah, I just try to play my game and not let their size intimidate me.”

In multiple games this season, Maniss proved tough to handle. In the team’s 58-48 win at Tulare Union (22-10, 7-3 EYL) she dropped 16-of-18 points in the first half to keep the Panthers in the game, and in the postseason she posted a game-high 25 points against fifth-seed Bakersfield Christian (19-7) in fourth-seeded Porterville’s 66-60 win in the quarterfinals of the Central Section Div. IV playoffs.

“She rose up in the playoffs,” Kavern said. “Especially against Bakersfield with their two big people inside. And when we played Union the first time over at Union, we struggled in the first half but she kept us in the game. She had 16 of her 18 points in the first half. If she didn’t play like that, we probably would’ve lost at Union. Again, she doesn’t like to lose. And when the pressures on is when she plays her best.”

Part of a three-year varsity, junior captain duo with last season’s Orange Belt POY, Jazlynne Medrano, Maniss and Medrano often gave the Panthers a spark on the court while sacrificing their stats with a team-first mentality.

“I really enjoy playing together and then when we’re both on it transfers through the whole team,” Maniss said. “So it’s fun playing with her. I like it. She makes it easy.”

On the season, Maniss averaged 12.9 points a game and is now 20-or-less points away from her 1,000th point. Someone you can count on at the free throw line, Maniss shot 67 percent from the line. She also averaged eight rebounds a game, was 55 percent from three and 47.4 percent from the field. For league, she was an All-EYL first-team selection.

Porterville lost to eventual Valley champion and state semifinalists, San Joaquin Memorial (31-6) in the Valley semifinals for the second year in a row, but still made it back to the state playoffs.

Seeded fourth and facing 13th-seed Diamond Ranch (21-7) of Pomona, the Panthers took on a team with shooters as well as height. Porterville lost 59-55 in overtime but Maniss’ defense kept the team in the game, despite a late fifth foul in the fourth quarter, and she finished with 10 points and was 4-for-4 from the free throw line.

A three-sport athlete, playing tennis in the fall and now track in the spring, Kavern called Maniss a “gym rat”. But even with all that’s on her plate, she’s still looking to do more.

“We have our summer ball but hopefully I’ll find a team this year to be on because I haven’t had a travel team,” Maniss said about her offseason. “But other than that, the summer ball stuff and tournaments. I go to camps, I try to go to at least one a summer. And I feel like those have really helped me a lot. And then other than that, just getting into the gym, shooting, trying to work on new things.”

Because of her years with Kavern, Maniss is also one of the players who helps run the team smoothly. Her being at summer ball encourages others to attend and makes her apart of a winning culture the Panthers have revamped.

Back-to-back 20-plus win seasons with two trips to the state playoffs, Porterville accomplished their main goal this season with a perfect 10-0 league record and their first EYL championship since winning a title in 2009 with an 11-1 record.

A sweet part of the win was being able to cut down a net after beating Monache 58-37 in the final game to remain undefeated in league. Maniss also scored 12 points in the win.

“We could’ve cut them down the game before because we were guaranteed league than but we wanted to wait so we could do it our last game,” Maniss said. “And since that game was against Monache, if we didn’t win we weren’t going to cut down the nets. So that was extra motivation for us to win and go undefeated.”

Coming in to her final season, Maniss is looks to improve her shot, repeat the team’s league success and win just one more title as well.

“I personally really want to win Valley and I’m sure the team does too,” Maniss said. “So it’d be nice to get into the state playoffs again and go a round further at least or just try to make it as far as we can but hopefully we’ll win league again. Then the next main goal will be Valley.”