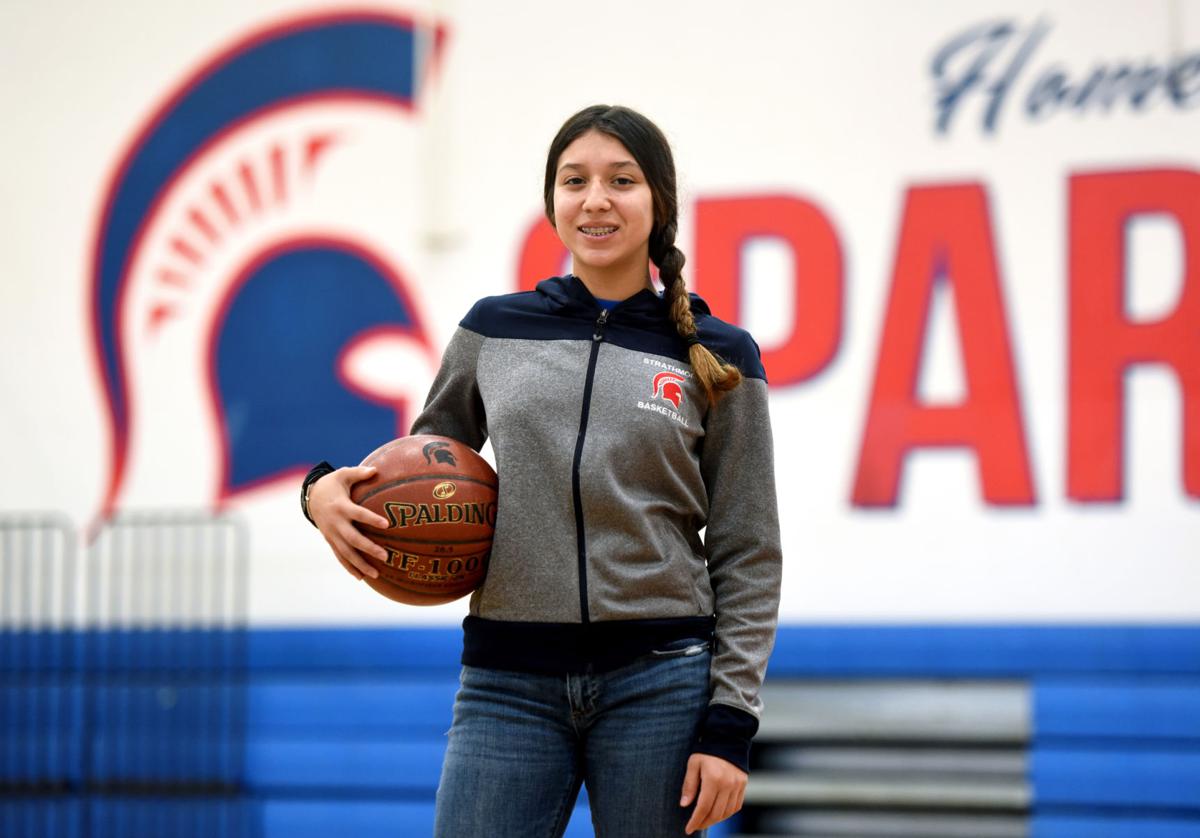 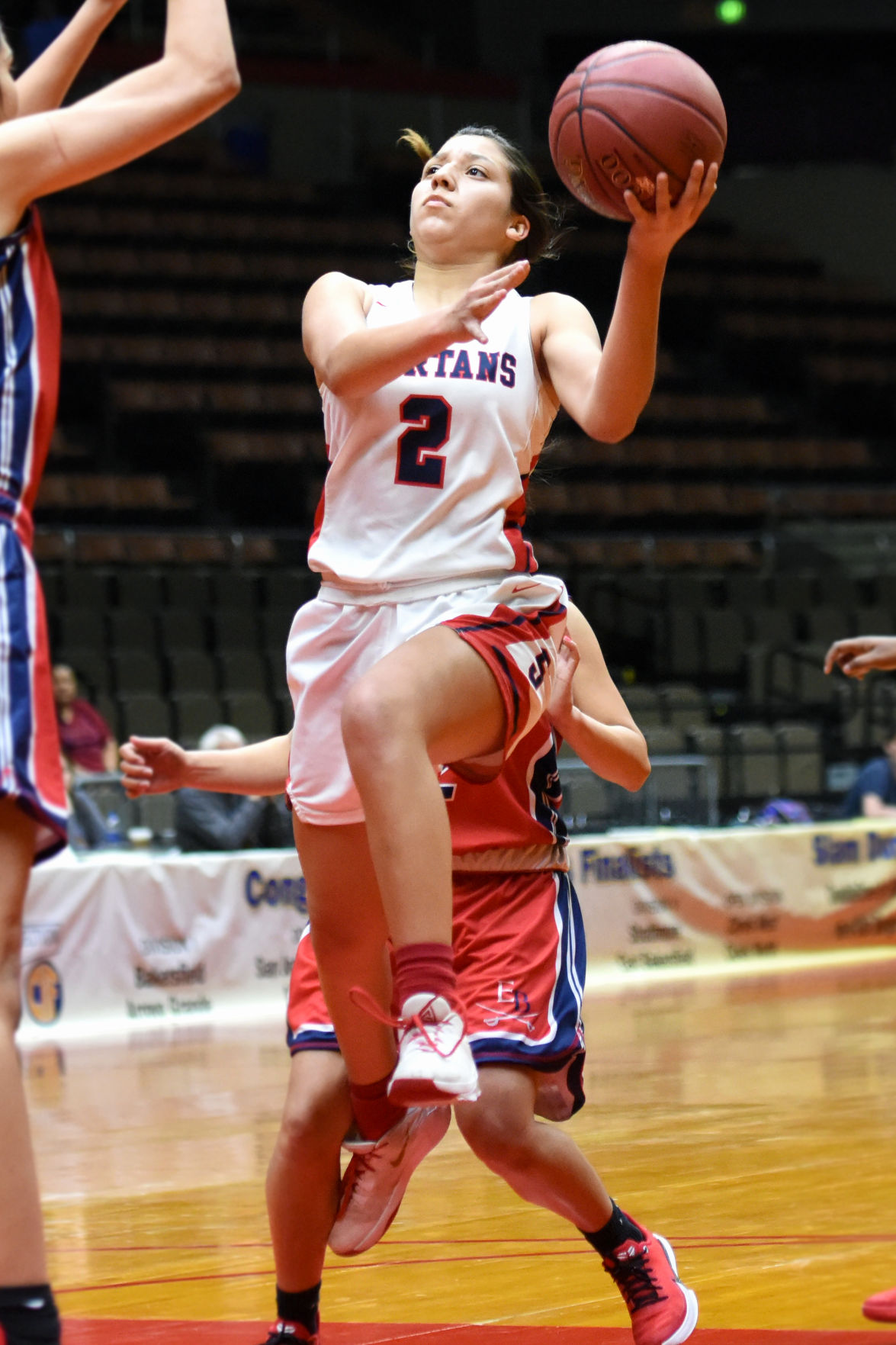 ‘A diamond in the rough’: Strathmore junior is the nation’s second leading scorer

Jazmine Soto is the real deal.

Her stats are mind blowing and borderline unbelievable, but when you watch her play it all makes sense. The Strathmore High School junior is simply in a league of her own, playing at an elite level.

This season Soto scored more points in 34 games than most players score in their entire four-year varsity careers. But it was more than her total points that made her The Recorder’s 2019-20 Orange Belt Girls Basketball Player of the Year.

But of course, the point totals are pretty cool too.

Soto broke the section’s single-season scoring record this year with 989 points — the second-most points scored in the nation — and sits at a Tulare County-record 2,498 career total, according to section historian Bob Barnett. She is only the 25th player, male or female, to ever crack 2,000 points in county history.

“When it comes to my achievements I think of my parents right away because they were the ones that were there from the beginning,” Soto said. “Coming into high school I never thought that I could break these records and set records. My dad said he’s always seen something in me and when I think of those, I think of my parents.”

From the beginning, SHS head coach Richard Miranda also saw something special in her.

Miranda had heard about Soto, and when he learned she’d finished all her paperwork to come to Strathmore, he invited Soto and her dad to talk at one of their scrimmages. But instead of talking, Soto put on her shoes and was ready to play.

“Man when I put her in, she was just going by the boys,” Miranda said. “Even the boys' coaches were like, ‘Who is this girl? Where did you get her from?' I go, ‘It’s a diamond in the rough.’”

On that day Miranda made a prediction about the Valley finals that proved true.

“I said, in two years we’ll be back cause I just saw something in her,” he said.

Since her freshman year, when she broke the section’s freshman scoring record with 712 points, all eyes have been on Soto.

“I kind of saw it as it is what it is,” she said. “It didn’t affect me that a lot of people were talking about me or talking about my game. I know some people, they get airheaded when people do talk about them and it does change their game. And that’s one thing I never had to worry about because it doesn’t affect me in any way.”

Soto's the main focus for every opposing team but few have found a way to stop her. Hard to stop because she's smart and quick, she scores most of her points by attacking the basket and drawing the foul. At the line, she's a 65% free throw shooter.

“(Div. III) Madera tripled her from half court all the way,” Miranda said. “But she has a knack to still get rid of the ball then go back and get it.”

Besides averaging 29.1 points per game and accounting for over 50% of the team’s total points, the 5-foot-6 point guard also led the team with 178 rebounds, 169 steals, 53 assists, seven blocks and seven double-doubles through 30 games. Her steals total is also the second highest in the section and eighth highest in the state.

Soto’s load increased in the preseason when Strathmore’s other top player, senior forward Kaija Ambriz, went down with a season-ending knee injury in a 51-42 loss against eventual Div. III Valley champions, Porterville (31-3).

“Kaija and I, we had a good bond with each other on the court and off the court,” Soto said.

“So it hit me the hardest, more than anybody else. … It was more stressful because Kaija — she lifted my shoulders during the games and stuff. She’d pick up my head and I couldn’t do that anymore. I had to be the one picking everybody up.”

Prior to losing Ambriz the Spartans were 10-0 against all upper division teams including wins against five Div. III teams and two Div. II teams. After Ambriz went down, Soto went from averaging 24.7 PPG to 31.2 PPG and led the team back to a third-straight playoffs.

“At times, it got frustrating,” Soto said about moving forward without Ambriz. “But I remembered I have this whole team behind me and everybody needs to get better so I can’t be selfish. I just have to perform and if it goes my way, it goes my way. And if it doesn’t I have to get everybody to pitch in.”

Finishing second in the ESL with league losses only to CIF State Div. IV finalists, Sierra Pacific (29-7, 12-0 ESL), Strathmore were the No. 1 team for the Central Section Div. V championships.

“The one thing on this team is that they know our success is going to be based off of what Jazmine can do,” Miranda said. “So there’s no jealousy in it. They know that if she gets going, she’s going to push us.”

Against Firebaugh, junior Yvette Gutierrez scored a career-high 23 points then turned around and had 13 points against Wonderful Prep while sophomore Joseli Gutierrez scored 10. Facing Corcoran, it was sophomore Erika Munoz with a big 17-point performance — 15 of which came from five three-pointers.

But when it came time for the showdown between second-seeded East Bakersfield (23-9) and Strathmore on the elevated hardwood of Selland Arena, the Spartans fell flat. Soto struggled too, scoring just nine points in the first half. She finished with a team-high 29 points and scored all but 10 of the team’s points in a 43-39 loss to the Valley champion and CIF State Div. V state finalist Blades.

“I think it was like a lesson learned for most of us,” Soto said. “I know that I never want to feel that feeling again. Worse than a heartbreak. It was a heartbreak honestly. And I think I learned that, I can’t wait to the last minute. The game that I had the first half and the second half were completely different. And, I know now that I can’t wait. I can’t settle.”

On why or what she was waiting for, Soto said, “I have no idea. I just got in my own head that game because the first quarter I think I only had two points and I was just over thinking everything and it wasn’t good.”

Knowing their next game could be their last, 15th-seeded Strathmore stepped things up in the first round of the CIF State Div. V tournament and took a close 50-43 loss to second-seed Marshall (25-5).

“I think it was because we knew that (if) we lose, there’s no more basketball,” Soto said about the bounce back. “And that’s what happened but I know that we played with heart that game and we fought until the end. … It was a desire of playing basketball. We didn’t want it to be the end so we tried our best.”

The finality of Soto’s high school career has already begun to set in for the Spartans and the team is gearing up to make next season a championship one with everyone back except Ambriz.

“I tell them, now we’re down to one more year,” Miranda said. “We’re down to 35 games, that’s all she has left for her career here. We’ve got to make the most of it.”

First up in making it a season to remember — Soto’s going to break the Central Section’s all-time scoring record of 2,938 points set by West Bakersfield’s Nikki Blue in 2002. Even after setting the section’s freshman scoring record, few people thought it’d ever be possible for her to break the record.

Now it’s just a matter of when. When will Soto break the record and become the most prolific scorer, male or female, in section history.

Whenever it happens, the Spartans will be sure to make it a night she'll always remember.