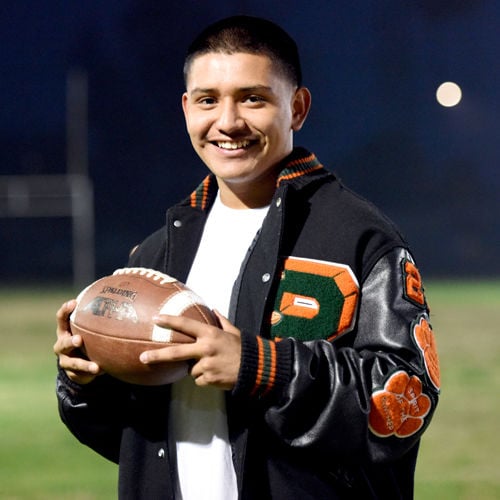 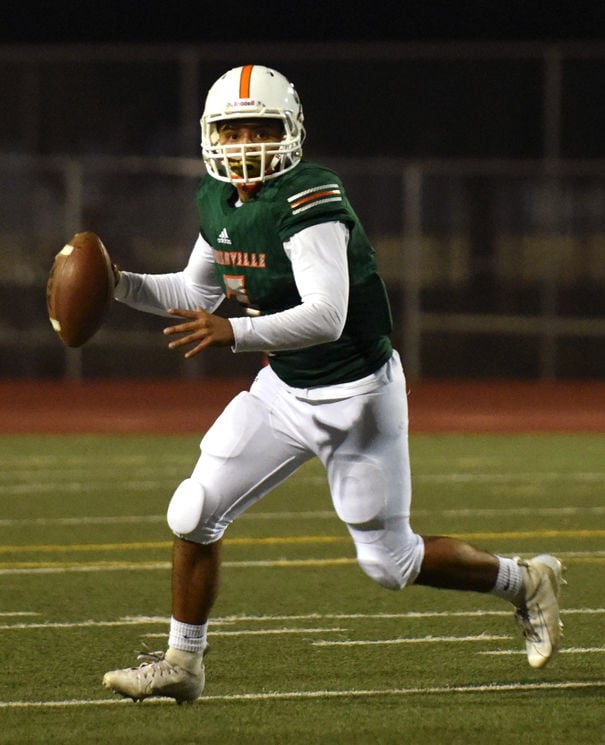 When the ball is in Hector Nava Jr.’s hands, anything feels possible.

Porterville High School football could be trailing by one or 10 with less than a minute to spare, but when their quarterback takes over there’s every reason to believe the Panthers aren’t done.

His sophomore season was amazing to witness but somehow Nava Jr. managed to outdo himself this season. It’s scary to think he’s only junior because his career is certainly one for the books — the record books to be exact.

Throughout his two years as the Panthers’ starting quarterback, Nava Jr. broke then set, then broke again, numerous game, season and career records for Porterville. He now possesses a total of 15 school records.

But that’s not all. He also led his team to back-to-back Central Section Division IV playoffs and the program’s first semifinal game since 2013 in Div. III. And he did it all while leading the Central Section and finishing 12th in the state in passing yards.

“When you have athletes that can do multiple things and move with the football in their hands, you try to put them in great situations to be successful,” PHS head coach Michael Machado said.

The craziest thing about Nava Jr.’s numbers and rankings in the section and state, is that he achieved so much while playing a game or more less than nearly everyone next to or above him. For example, San Joaquin Memorial’s Finn Collins played in 14 games and only finished with 3,576 yards.

Throughout his entire athletic career, Nava Jr. has only ever missed one game. That came this season when a shoulder injury in his throwing arm made him miss the team’s 34-17 loss to Div. II Redwood (10-2).

“It wasn’t something I wanted to hear or do but it was something that had to be done for me to be healthy for the rest of the season,” Nava Jr. said. “It really was something I hope I don’t have to do ever again because it sucks not being able to be out there with all my other friends and, well family, playing the game I love.”

Nava Jr. and his teammates are extremely close, especially he and the offensive players. This season, one of the best moments to witness during Porterville (8-5, 3-2 EYL) games was when Nava Jr. would score a touchdown then go to offensive lineman, senior Charles Finley, who would lift him up.

Being a wrestler too, Nava Jr. is able to squat 400-plus pounds and power clean over 200 which allows him to work out with his linemen. He also does post-game dinners, win or lose, with his linemen and credits his receivers and running backs when speaking about the offenses success.

“I think we had a lot more weapons this year, especially with (Jovanie) Cardenas being out there,” Nava Jr. said. “He’s so fast. … He was a weapon we didn’t have last year so a lot of people didn’t give him the recognition that he should’ve gotten.”

But no matter how many awards or amount of recognition he receives, Nava Jr. will never actually admit that he is as good as he is. But even from his time doing youth football with the Porterville Cougars, to playing on the high school freshman team, people always knew he was good.

“We seen him as a freshman and we felt that he was a football player that made a lot of plays and extended some things at the lower levels,” Machado said. “So we had a good feeling about him as he started to mature into the program.”

Keeping plays alive is probably what Nava Jr. is most famous for doing. There’ll be times when he scramble as a defensive line is crashing in, and it looks certain he’s about to take a sack, but somehow he escapes and throws a 50-yard deep ball to one of his receivers or breaks off for a 15-yard run and a first down.

But that doesn’t mean everything is erratic for Nava Jr.

When Porterville took down Div. II Dinuba (5-7) 49-42 for the second year in a row, Nava Jr. was calm and composed in throwing a 22-yard, game-winning touchdown with less than 20 seconds to play.

“I feel like that was a game that let everybody know who we were,” Nava Jr. said. “This year too, I know they’d had a little streak going on at their house, they hadn’t lost a season-opener there too. …  (But) that was just something that we wanted, we wanted to make a name for ourselves again. That we weren’t (one and done) with that one season. Like put our foot on the ground and take that streak away.”

Nava Jr. went 14-of-19 for 380 yards and four touchdowns with no interceptions against Dinuba, but it’s the latter part that he’s most proud of — zero interceptions.

One of the more glaring parts of Nava Jr.’s stat sheets is his 13 turnovers: 11 of which are interceptions and three of which came during the fourth-seeded Panthers’ 27-23 loss to top-seed Washington Union in the Div. IV semifinals.

Nava Jr. led the Panthers to the semifinals with outstanding performances in the team’s 65-0 shutout of 13th-seed Hoover (4-7) and a 40-6 win over fifth-seed Chavez (9-3), respectively. He threw for a combined 643 yards and six touchdowns on 28-of-47 completions with just one interception, but struggled against Union.

“Our offense is probably 90% quarterback driven and I don’t think people really understand the amount of football I put on him as a player,” Macahdo said. “I expect him to execute everything all the time. And it’s not as easy as it looks from the sidelines. He just made some mistakes and those things happen when we put it in the air as much as we do.”

Nava Jr. rushed for a season-high 131 yards and one touchdown but went 13-of-27 for 258 yards and two touchdowns. It’s a game Nava Jr. says got the best of him adrenaline-wise.

“Personally I had several mistakes,” Nava. Jr. said. “Those three interceptions, a couple were just not really reading the defense. Or just not seeing everything that I should’ve seen before the ball was snapped. Or just like making a simple mistake of not reading the defender properly.”

Still, Nava Jr. finished the season with a three touchdowns to one interception ratio. However, next season Macahdo and the Panthers are expecting even more out of him.

“We’d love to see the touchdown ratio go to 4:1 or 5:1, more drives ending in kicks and eliminate pre-snap penalties,” Machado said. “Get him to a point where he can check in and out of stuff at the line of scrimmage and giving him the freedom to do that. If he can understand that perspective of the football game as a senior, it’ll make him a better football player and us a better football team.”

In 2018 he started the season by setting single game records with 25 completions and 41 passing attempts against Dinuba. This season, he set two school records with most touchdowns scored in a game (seven) and the longest touchdown pass (79 yards to Javier Benevidez) in a 61-6 win over rival Monache (2-8), as well as most passing touchdowns (six) in a 53-7 trouncing of Granite Hills (3-8).

So again, what is better for Nava Jr.? An EYL title? A Valley or state title? Even more records broken?

Better remains to be defined, but whatever it is, get the popcorn ready because Nava Jr. will be sure to put on a show.