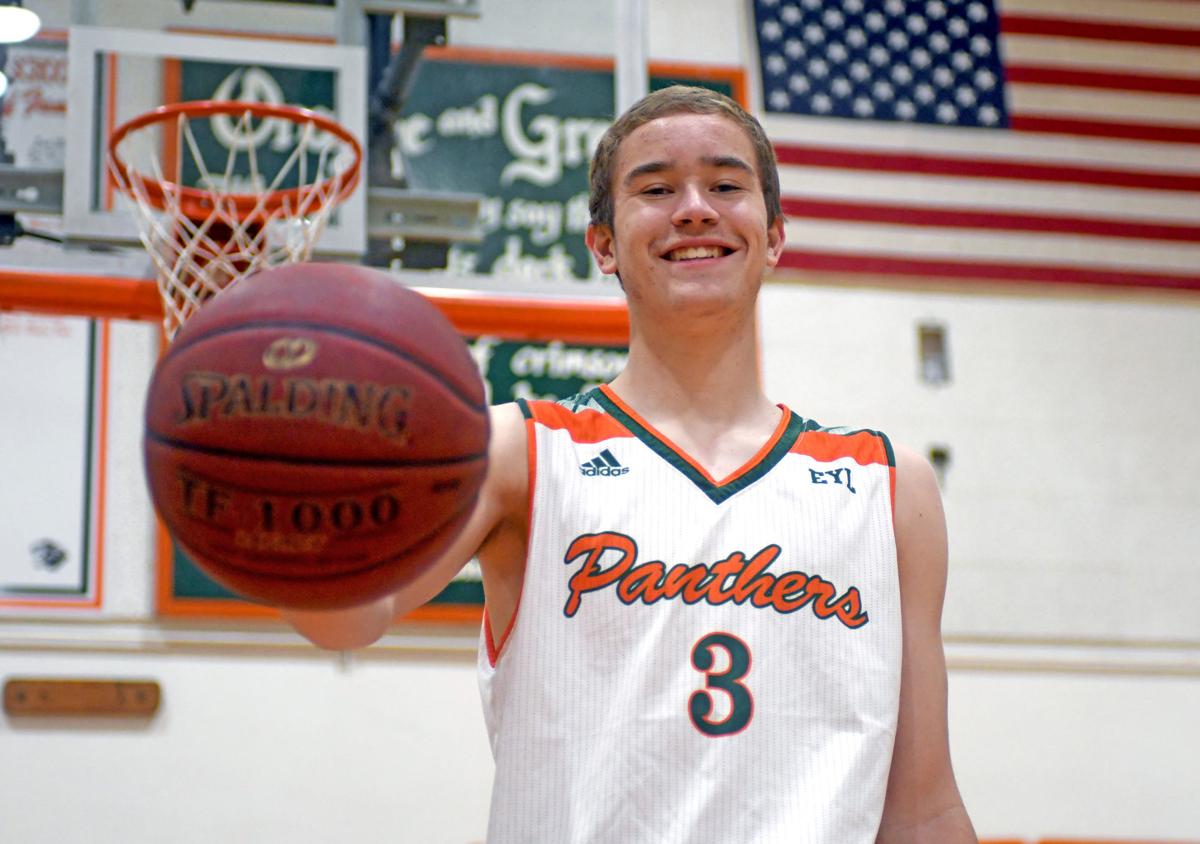 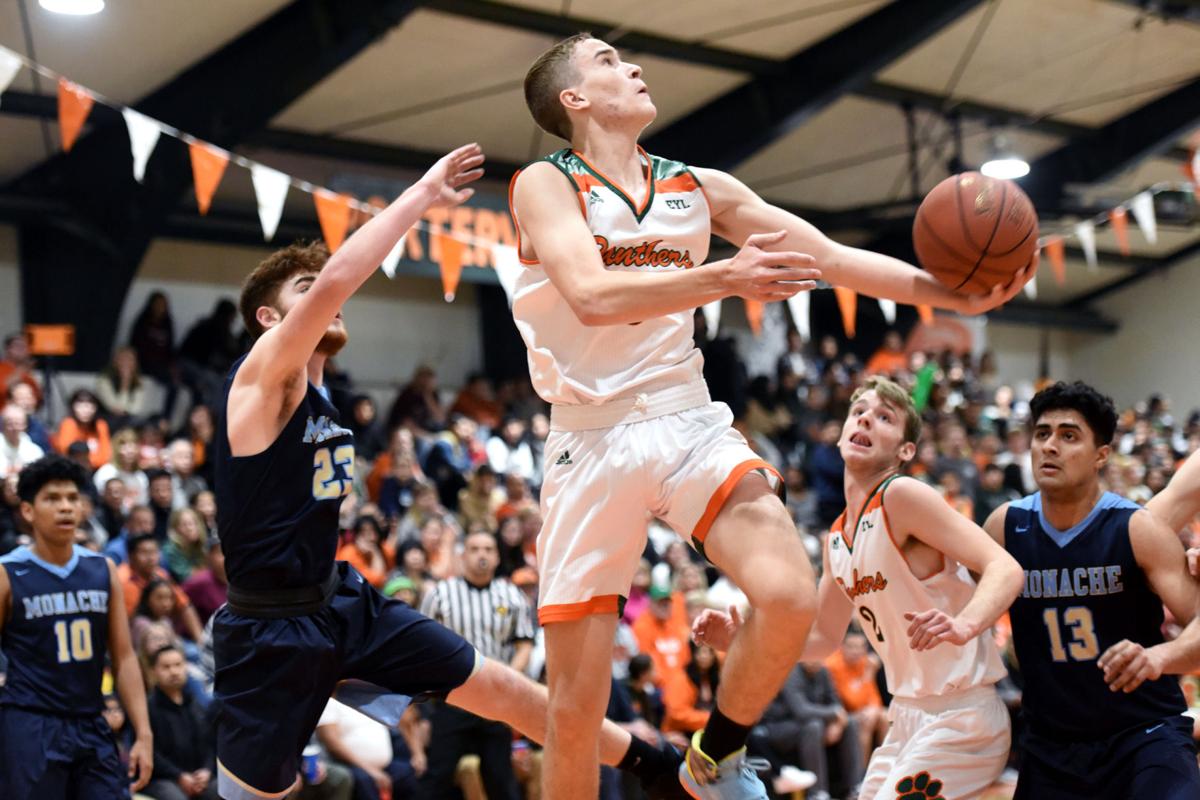 Nash Wobrock wearing the orange and green of Porterville High School was a sight to behold this season.

And not just because he was a top transfer from crosstown rival Monache, but because of how well he handled the consequences of his move and excelled for the best season of his high school career.

Wobrock thrived with the Panthers (19-11, 8-2 EYL), leading them to an East Yosemite League title and proving himself to be one of the best players in the area with an All-EYL co-MVP selection, as well as being named The Recorder’s 2019-20 Orange Belt Boys Basketball Player of the Year.

At Monache, Wobrock won an EYL title as a sophomore and was one of the team’s top players junior year. But even so, he knew since sophomore year that he really wanted to transfer to Porterville.

“One of the main reasons was my cousin goes here and I’ve never gone to school with him,” Wobrock said. “...Also my best friend comes here and a lot of my church friends come here. So I was like, why not for my last year of school come here and enjoy my last year.”

In a town where the rivalry runs deep for both students and alumni, Wobrock took a lot heat for transferring but handled it well.

“It wasn’t really tough just because I’ve been wanting to do it but once I made the decision, then the backlash from it kind of was tough but I think I overcame it well,” Wobrock said. “It’s fine.”

One of the bonuses about Wobrock coming to Porterville was that the Panthers knew exactly who they were getting even before the 6-foot-4 shooting guard showed up for preseason workouts.

“He sees the floor very well,” PHS head coach Lance Wallace said. “He can handle the ball for a big kid in our area. So anytime you have that combination, we know he can score. Streaky 3-point shooter. I mean we knew exactly what we were getting because we had game plans for him from playing against him.”

But a downside to the transfer was that Wobrock was ruled ineligible to start the season and the team had to wait through an appeals process for him to become eligible.

Wobrock was ineligible through the team’s first 10 games but returned in style with a team-leading, 21-point performance, and scoring eight of the team's 12 overtime points, in a 66-59 win over Templeton (9-20) at the Arroyo Grande tournament.

“If we didn’t have him in the Templeton game over at Arroyo Grande, we lose that overtime game,” Wallace said. “Plain and simple.”

It was a big game for the senior, but over the next few Wobrock did have to go through an adjustment period. But he bought in and by the time league came around, he was ready to go after the EYL crown with the rest of his teammates.

“The coaches always preach that whenever we come back from the Arroyo Grande tournament that that will be the start of if you want to change something you change it right there,” Wobrock said. “I felt we did that and we started off really well in league.”

Wobrock played some of his biggest games of the season in league. He shot 44.9% from the field and averaged 15 points and 11 rebounds a game to earn a share of the All-EYL MVP title with Mikey Ficher of Tulare Western (22-8, 7-3 EYL). Through his overall 20 games, Wobrock averaged 15.3 PPG and 6.7 RPG.

Clutch performances in league became one of the bonuses of Wobrock's contributions to the Panthers, with one of his most memorable performances happening in a 58-55 win over eventual Div. IV Valley finalist, Delano (23-12, 4-6 EYL). With four seconds to play Wobrock pulled up from half court to hit the game-winning, buzzer beater on Senior Night.

“At first when I made it, I was like, ‘Did I just make that?’ And then I saw everyone rushing towards me and I was like, ‘Oh my gosh, I made the shot!’” Wobrock said. “That was a good feeling.”

But it was the last league game, the final meeting between Porterville and Monache, that was Wobrock’s favorite. The Marauders won the first EYL meeting but this time around, Wobrock had an incredible second half to help Porterville beat Monache 85-77 in overtime for the outright EYL title.

“The first half of the game I really didn’t do that well but our other teammates held it down,” Wobrock said. “Then in the second half (and) overtime I did really well. That was probably one of my best games of my high school career. I had (28 points) and probably seven, eight rebounds. Good defense. It was just probably my best all-around game and it was fun doing it against Monache as well because I proved myself that game.”

In the CIF Central Section Division II playoffs, Wobrock continued to play well and led sixth-seed Porterville to an opening-round 63-55 win over 11th-seed Atascadero (15-12) with 23 points. The Panthers lost their quarterfinal game 59-56 to third-seeded Centennial (15-14) but Wobrock finished with 10 points.

“My first goal this season was just to have a good season, just to have fun,” Wobrock said. “My second was to win EYL and my third goal was to win Valley. That one didn’t work out but it’s OK. I had fun and we won EYL so I got two out of the three goals.”

In many ways, it's impressive how well Wobrock handled this season and was able to play at a high level through so much adversity. Everything worked out in the end but there's no denying it was a tough season for the Panthers.

“It was a lot of emotions for me through the year,” Wallace said. “It was a tough year. I mean it was a fulfilling year but at the same time there were a lot of things that were going on behind the scenes that everybody doesn’t see, and for him to come over here and for all of us to deal with all that. On the outside (people say,) ‘Oh they got the transfer, they’re a good team. It’s just easy, add water.'

That certainty about this particular transfer for Wallace comes from the fact that Nash Wobrock isn't just any transfer — he is the son of high school best friend, Nate Wobrock.

Both Wallace and Nate graduated from Monache where they won an EYL title. Now three years after Wallace's son, Treager Wallace, won an EYL title and was named the All-EYL MVP for the Panthers, Wallace watched the same happen for Nate.

Nash went through one heck of a journey to be able to suit up for the Panthers. But one of the hardest parts of it was simply telling his dad he wanted to transfer.

But Nate — who everyone knows from his overenthusiastic support from the stands and his impossible-to-miss shirts with a huge smiling Nash plastered on the front — helped Nash overcome the backlash he faced from the transfer and continued supporting his son to the extreme this season.

“I think he understood what was going on so he just supported me through everything,” Nash said.

Now Nash moves on, drama free, to the next chapter in his basketball career — playing for Porterville College. The future Pirate plans to make the next two years of basketball some of his best as he pursues an opportunity to play at a four-year college.