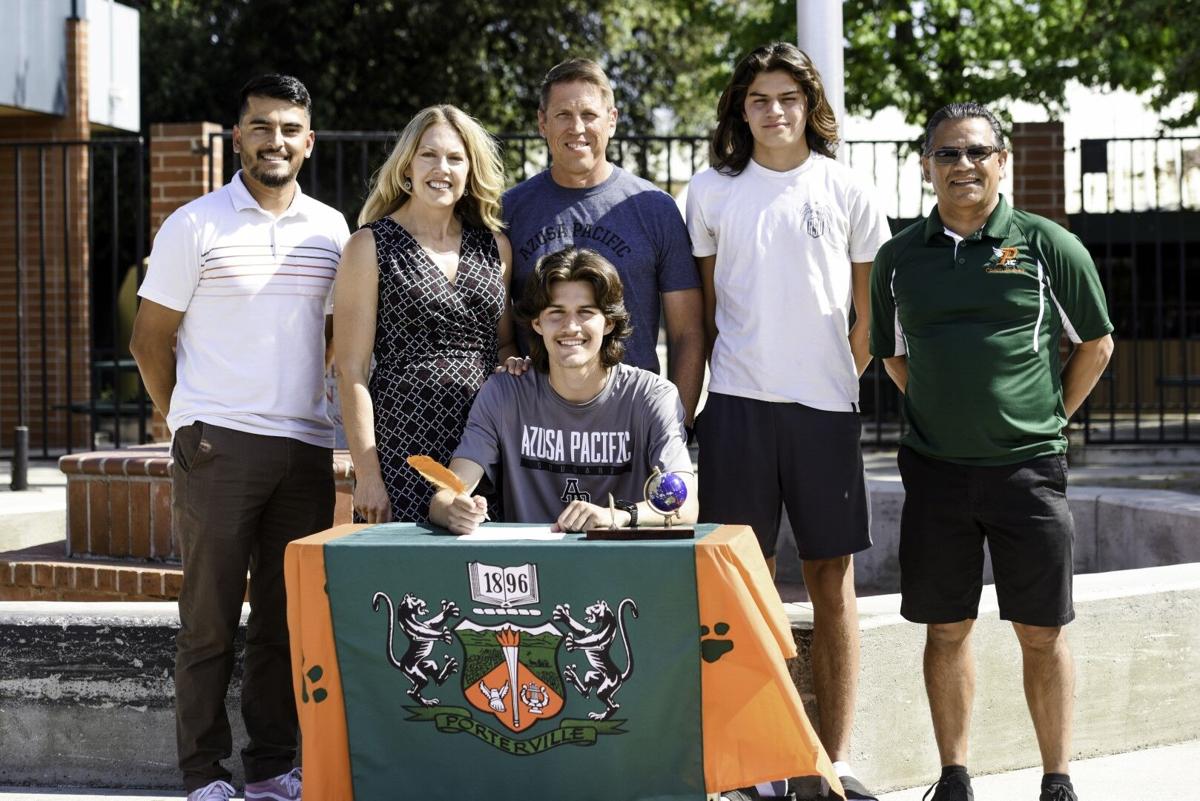 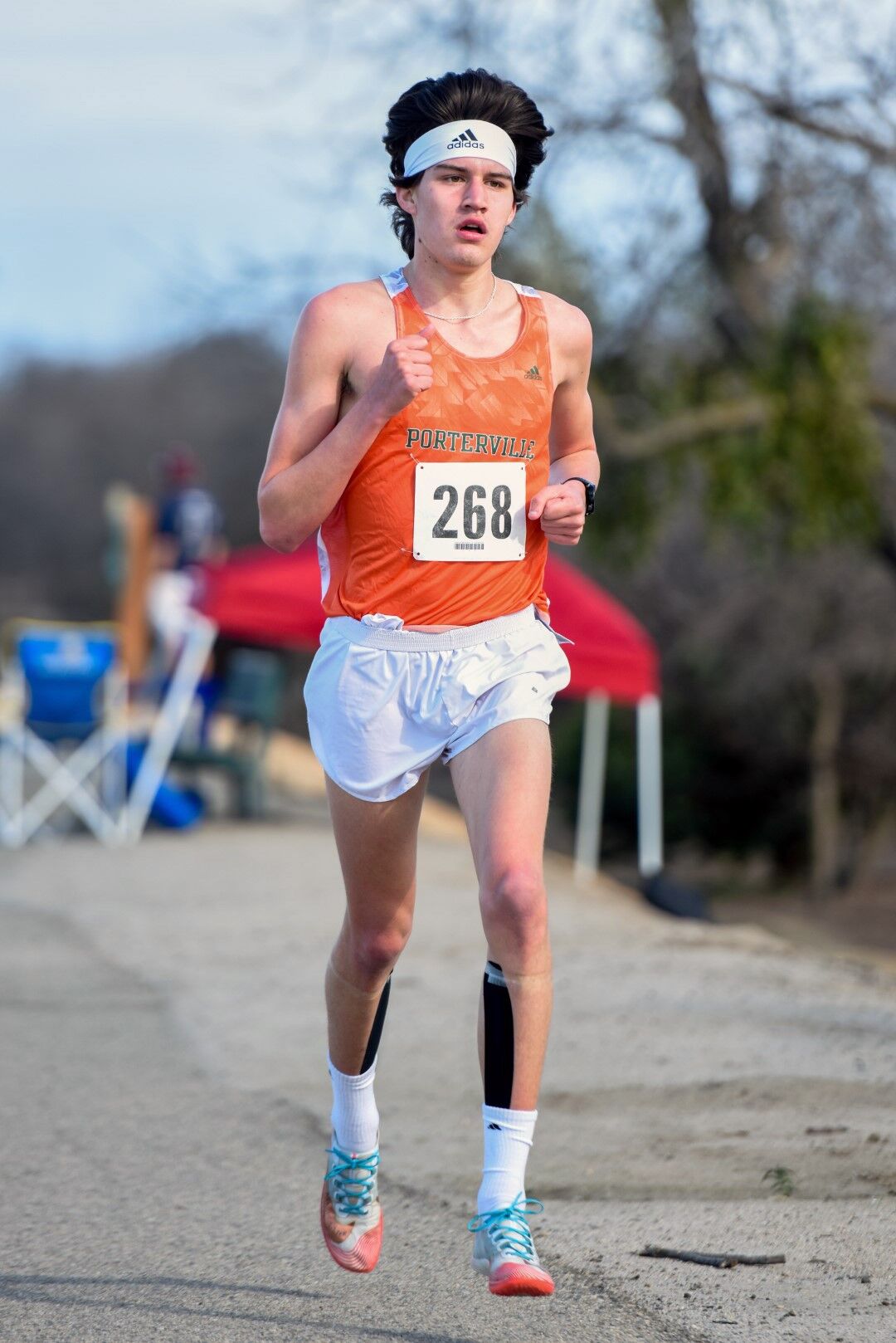 After years of hard work and dedication, Joshua Meneses is seeing his efforts come to fruition.

On Thursday, the Porterville High School senior was joined by family and coaches as he signed a letter of intent to run men’s cross country and track for Azusa Pacific University next season.

The Cougars are an NCAA Division II institution that competes in the PacWest Conference.

“I feel good,” Meneses said. “I feel relieved because I’ve put in a lot of work over the past couple of years, and it’s kind of paying off.”

Meneses said he was deciding between two other schools when APU’s new coach, Sean Smith, reached out to him and expressed his interest.

“I wasn’t going to run for Azusa initially,” Meneses said. “I was kind of between Biola and Westmont. And then (Azusa) got a new coach, and he emailed me and called me that night. He’s like, ‘I want to get you down here this weekend.’ As soon as I visited with him and the team, I kind of fell in love with the spot. And it was just the perfect fit really.”

Meneses picked up cross country his sophomore year after being given three choices for the fall season — work, play water polo or run. He didn’t like water polo so he tried working, but while painting a roof in the hot sun he decided cross country would be a better option.

Salas, an assistant coach for cross country and track, immediately saw the potential in Meneses and stayed on him to continue running.

“Like (cross country head) coach (Juan Jimenez) says, he gets people going. He has a real infectious and attractive personality, so the kids want to run with him and be around him. He’s our two-year captain. And like coach said, he’s going to do really well in college because he has a great mindset. He’s going to succeed.”

Something that stood out to Salas and Jimenez immediately about Meneses, is that he was a leader from the beginning.

“He’s a leader,” Jimenez said. “From the very beginning, even his first year, he was the one that was stirring the pot, getting people doing what they’re supposed to be doing. At practice, he’s the rah-rah guy, ‘Let’s get moving. We’re going to do this.’ When we needed kids to show up, and they weren’t showing up, he was the one hunting them down.”

And that passion wasn’t reserved just for his teammates. Jimenez said that after the team missed a chance to go to the CIF State Cross Country Championships and Meneses felt he performed poorly at the Central Section Championships, the then-sophomore was upset. But he used that frustration as fuel and helped lead the team to the program’s first-ever Division IV Valley championship the next season.

“We just put so much hard work in that summer leading up to it. That was definitely one of my best memories of cross country,” said Meneses about winning Valley. At Valley, Meneses ran a time of 17 minutes, 24.02 seconds for 12th and was the team’s second top finisher.

“This thing hurt and it made him so much stronger,” Jimenez said. “And I think it fueled his entire summer workout and again, he brought everybody else with him. He wasn’t necessarily the fastest but his energy brought everybody with him. And that’s the leadership that we’re talking about that’s going too, wherever he goes, will be a positive attribute to the team.”

Meneses hit a 5K personal record of 16:57 to start the delayed 2020 cross country season and is coming into his final track season hot after missing out on his junior one due to COVID canceling the season.

“He’s running some good times and he has a good shot at making Valley,” Salas said.

The CIF State Track and Field Championships for this season are canceled, so Meneses is setting his sights on dropping his times and making it to the Valley championships to close out his high school career.

“I want to get into the 4:20s for the mile and break 2 minutes in the half-mile,” Meneses said. “And then I want to make it to Valley in one of the three events. And hopefully, compete at Valley. We’re not going to have a state (championship) this year but hopefully, make a run at the Valley meet.”