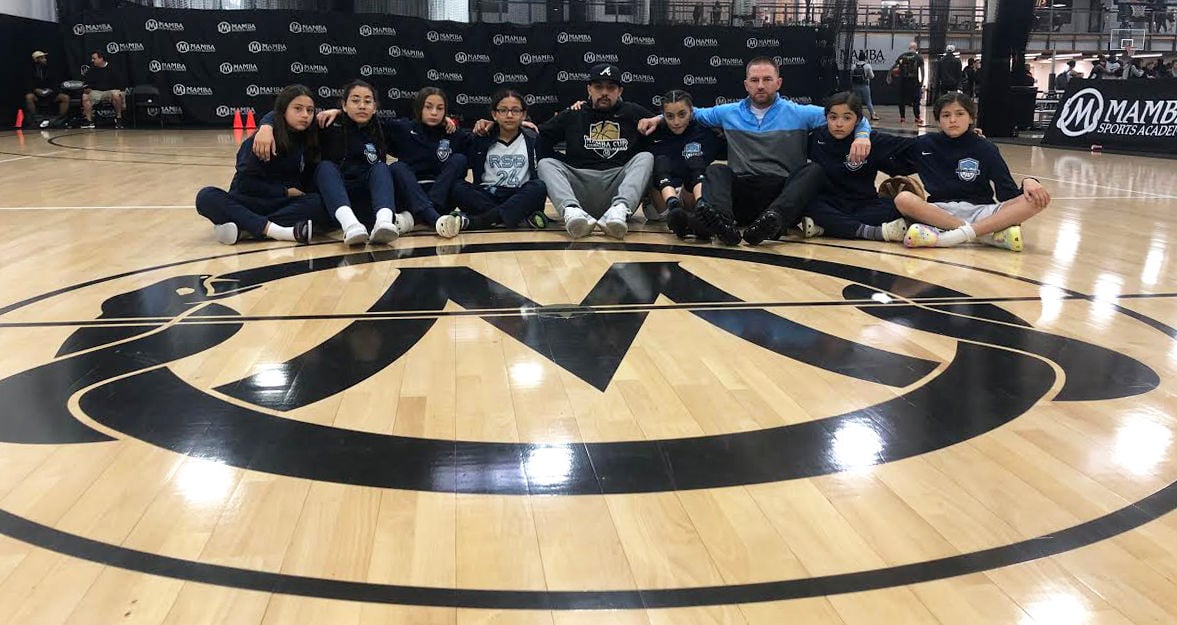 Contributed Photo by Jonathon Bartlett The Rising Stars Basketball 12U team pose for a picture at the Mamba Cup Tournament Series, Sunday, Jan. 26. 2020, at the Mamba Sports Academy in Newbury Park, CA. 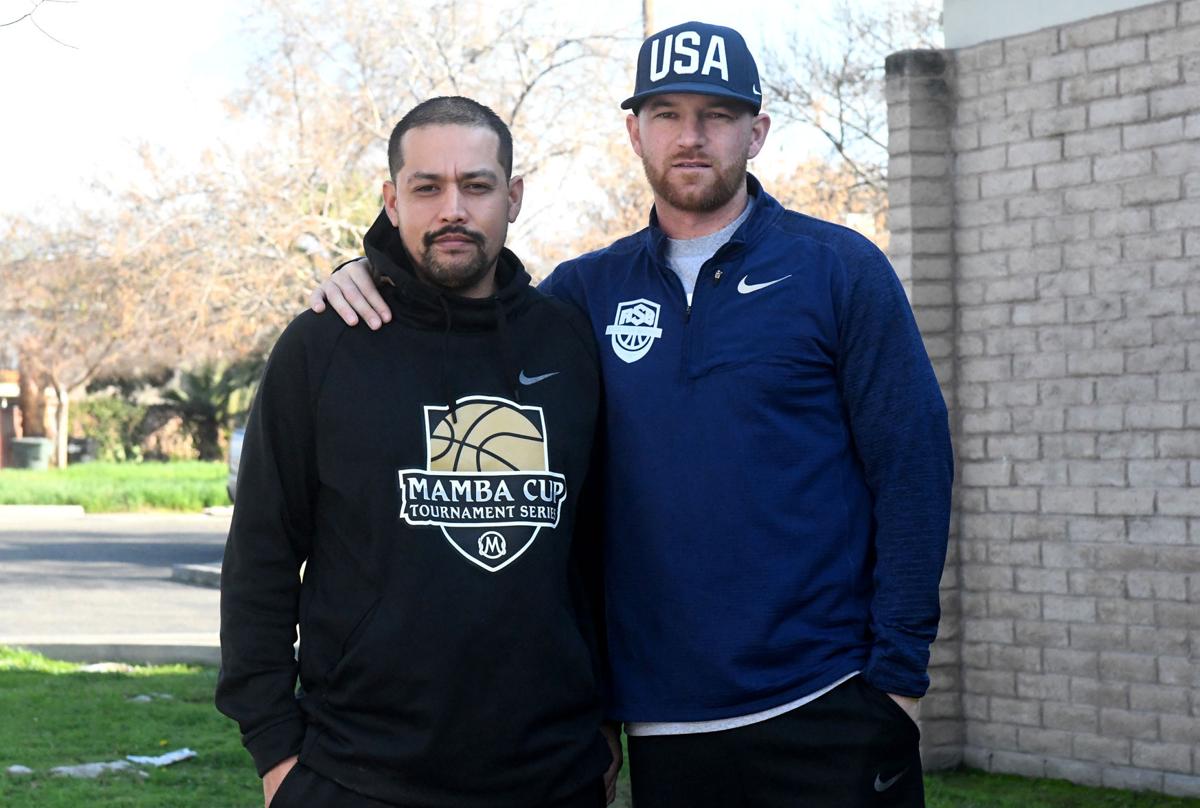 Rising Stars Basketball coaches, Jose Miranda, left, and Jonathon Bartlett, spoke about being at the Mamba Cup Tournament Series with their sixth grade team over the weekend.

Contributed Photo by Jonathon Bartlett The Rising Stars Basketball 12U team pose for a picture at the Mamba Cup Tournament Series, Sunday, Jan. 26. 2020, at the Mamba Sports Academy in Newbury Park, CA.

Rising Stars Basketball coaches, Jose Miranda, left, and Jonathon Bartlett, spoke about being at the Mamba Cup Tournament Series with their sixth grade team over the weekend.

If there were any lessons learned Sunday morning when news broke of NBA legend Kobe Bryant’s death, it was to cherish those around you.

Bryant and his daughter, Gianna, 13, died in a helicopter crash along with seven other individuals on their way to the Mamba Cup Tournament Series at the Mamba Sports Academy in Southern California. Excited to see the Bryants that day was the local Rising Stars Basketball 11U team.

“We were on our way to the Mamba Academy for the 12 o’clock game to go watch him and his daughter play that afternoon,” assistant coach Jose Miranda said. “That’s when we started getting all the news about what happened. We got to the sports complex, and even the guys up front, the security guys up front that were escorting the traffic...We knew it was true once we saw them in tears.”

Traveling together with five of the team’s seven players and RSB head coach Jonathon Bartlett, most of the team learned the news of Bryant’s death via celebrity news outlet, TMZ. But the news was too astonishing to believe. Bartlett, a Bryant fan since childhood, heard the news from a phone call and went numb.

“I grew up watching the Lakers,” Bartlett said. “I’m from Orange County so I mean, in my family we’re all Kobe fans. I was numb. At first I didn’t take it all in but when you’re walking in and seeing everybody that way, it made me numb. This, this is — I mean we’re getting ready to see this guy coach and his daughter play. It’s rough.”

Scenes of the Mamba Academy and reaction to the news played out on social media with descriptions of the young players, coaches and parents crying.

But arriving just after the news broke, Miranda and Bartlett described the heartbreaking silence that also brought it all home. Kobe Bryant, a father, a coach and one of the greatest athletes in the world was dead.

“It was dead silence and that’s when it really, really, really hit,” Miranda said. “Some of our parents, they’re all Lakers fans as well. Basketball fans. Parents. There were a lot of tears shed in that gym that day.”

Playing in the Mamba Cup

In the upcoming days, RSB will learn if the Mamba Tournament Series will continue. The series, and it’s final tournament, the Mamba Cup Championship, is something the team was looking forward to because it wasn’t just any tournament.

“The good thing about that tournament was they kept stats,” Miranda said. “Individual stats, player stats, team stats, so I mean it was a real, real legit tournament.”

Bryant, a proponent of women’s and youth sports with the encouragement of his daughter Gianna, had put together one of the best youth basketball tournaments in the state. From just one month playing against elite competition, Miranda said the team had improved.

“He brought in the best talented teams from California (and) some out of state teams,” Miranda said. “We went there last month and we’ve only gotten better within a month just because playing in those tournaments. Even watching the other coaches there, the style they coach. I picked up on a couple of things from some of those coaches there because they’re elite teams so you’ve got some elite coaches as well.”

Over the weekend the team went 3-1. They missed playing for a championship by six points but were getting ready for the third-place game.

Bryant, a Los Angeles Laker for all 20-years of his NBA career, won five NBA titles for the purple and gold. Playing straight out of high school, he was a two-time NBA Finals MVP and a one-time league MVP. His accomplishments as a basketball player were endless and his spot as a member of the Naismith Basketball Hall of Fame Class of 2020 was confirmed on Monday.

Bryant’s relentless passion, his “Mamba Mentality”, resonated in everything he did. Who could forget when he limped to the free throw line and made two free throws after tearing his Achilles’ tendon in 2013? Or when he scored 81 points on the Toronto Raptors in 2006?

One of Bartlett's favorite memory was in 2000 when Bryant helped orchestrate a 16-point, fourth-quarter comeback in Game 7 of the Western Conference Finals for a 89-84 win over the Portland Trailblazers. An alley-oop from Bryant to Shaquille O'Neal in the final minute of the game was the highlight for Bartlett.

“I want to say 2000, he threw an alley-oop to Shaq against the Portland Trailblazers. You know a lot of people say, ‘He shoots (and) shoots.’ But I remember he threw an assist for him and he didn’t get many of them,” Bartlett said with a chuckle. “But he threw it up there.”

Like Bartlett, Miranda was a lifetime Bryant fan. He’d take shots for hours on the Roche Avenue Elementary School courts with a countdown buzzer like he was Bryant shooting a game-winner. But he also remembers those early 2000s, when the Lakers were being challenged by the Trailblazers and Sacramento Kings for the NBA’s Western Conference titles. During that time Miranda would go to his sister’s home to watch the games.

“I didn’t have cable at my house, we had a TV but we didn’t have cable,” Miranda said. “So I would have to walk maybe about a mile and a half to my sister’s house to go watch those games. I remember sitting in my brother-in-law, sister’s room. Just watching those playoff games, just him. He was a young Kobe at the time. And just watching those games made me love basketball more.”

Losing anyone is painful. But for people and fans like Bartlett and Miranda, who lost a childhood idol that had become someone they respected also as a father and coach, it hurts more.

For the tournament RSB stayed in a hotel that ended up being 15 minutes away from the fatal helicopter crash, and on their way back to Porterville they stopped by the crash site. They stayed for a couple of hours.

There was still smoke coming from the crash site when they arrived and hundreds of people had showed up. Miranda estimated over 300 people were there by the time they left. It was hard, but the stop was a necessary one for the team to make.

“Let’s go pay our respects,” Bartlett said he told Miranda. “Me and coach, as Kobe fans, as looking up to him not only as a father, as a coach, as a player. I really felt, I told him we really need to go. And it was something good for us to go experience that and see that. But it was tough.”

The drive back was just as tough with the two coaches still in shock as their players searched for any new information they could fine.

“I think I drove all the way to the Grapevine but I didn’t get to see everything these guys were seeing,” Bartlett said. “All the girls in the back, ‘Look at this.’ All had different videos going on, I’m like, ‘Hey, turn that stuff off for a minute please.’ Cause it was the whole ride.”

Miranda added, “Real shocking, we were still in disbelief. It was a three-hour ride back so we had time to think about it and process it. It’s just shocking. It’s more shocking as a coach and a parent, more than him being a basketball player. I think that’s what hurts more.”

Dealing with the loss

As fathers and coaches, the loss is hard on Bartlett and Miranda. Three young players, including two teammates of Bryant’s daughter, three mothers, a father, as well the pilot, were also lost in the crash.

“When I got home that night, I hugged my family,” Miranda said. “I mean I couldn’t let go. I just let it all out, tears. And I’m not really an emotional guy but for some reason this is really tough on us. It’s been a rough 48 hours since we found out about the news.”

Bartlett, who’s been in communication with Miranda ever since they found out, said he was doing OK until he and his daughter watched a replay of Kobe’s last game on Monday.

“I was like...I was doing good until they played that,” Bartlett said. “I was like, ‘Ughh.’ It’s just everything was Kobe, what was going on. … It’s hard to explain.”

Bartlett’s daughter, who also plays on the RSB team is still learning to handle the loss according to Bartlett.

“My daughter as well, she’s a Kobe fan,” Bartlett said. “She kind of grew out of it cause he stopped playing. But she knew that when Kobe’s on, we’re going to watch. So she took it pretty hard herself.”

Because of the way the crash happened and it still being fresh in his mind, Miranda admitted moving forward is still hard to do.

Bartlett cancelled practice for the RSB team this week, telling everyone to “hang out with your family and have a good time this week.” But Miranda used practices with his son’s team and the Pleasant View A-team as therapy.

“Even the following morning on the way to work, it was real foggy. I work out there in Poplar. It was real foggy and it kind of made me remember the situation. I know I wasn’t in a helicopter but I was driving in thick fog. Thoughts were coming to my mind. Am I going to make it back home? Am I going to see my kids again? I pretty much cried for 10 minutes on the way to work. It’s 12-minute, 13-minute drive for me but once I got outside of Porterville, the fog kicked in and that’s just where something just hit me. It just hurt.”

One thing helping Miranda begin to deal with the loss is talking about it.

Miranda was one of the people interviewed on Sunday after the crash and he said that after being so close to the situation, talking about it has begun to lift a weight off his shoulders.

“The biggest thing I’m going to get out of this is to enjoy your time with each other,” Miranda said. “Don’t be upset at each other. Things always happen but accidents happen too. You never know if you’re going to make it back home (or) if something happens to one of your family members. So appreciate the time you have with each other and be thankful every night your families home safe every night.”