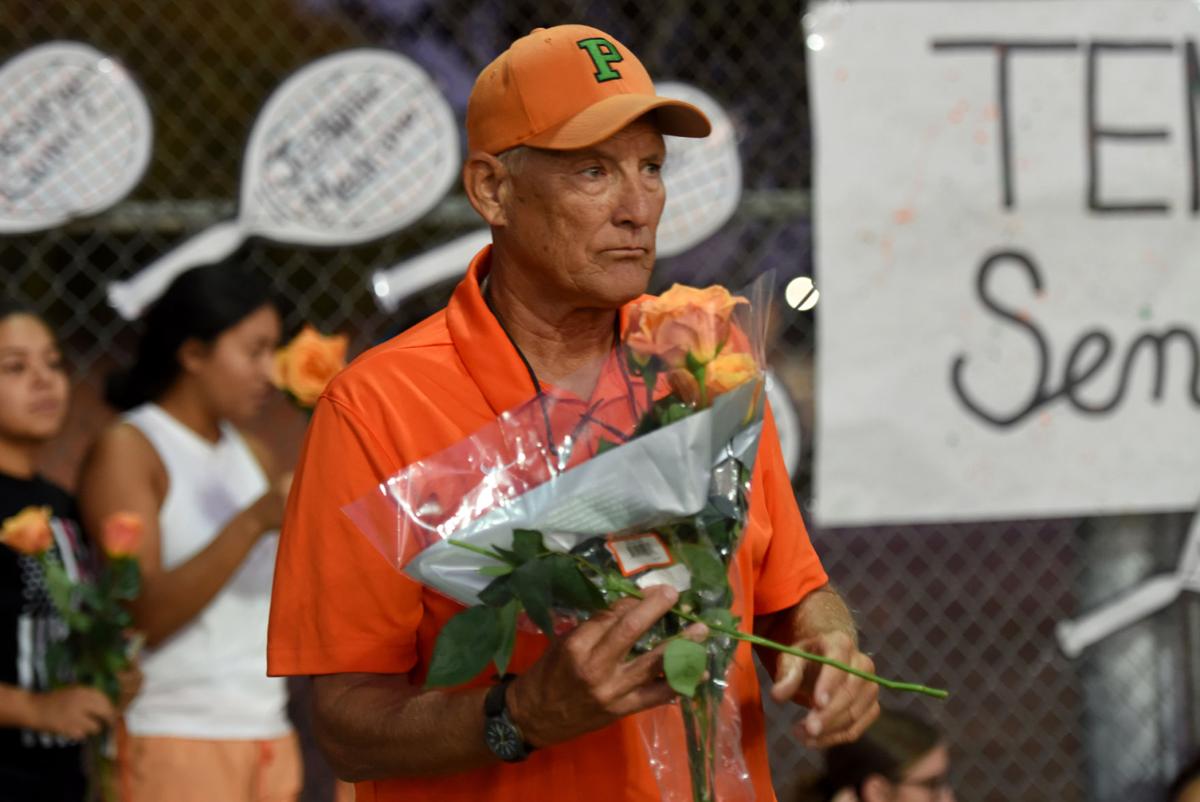 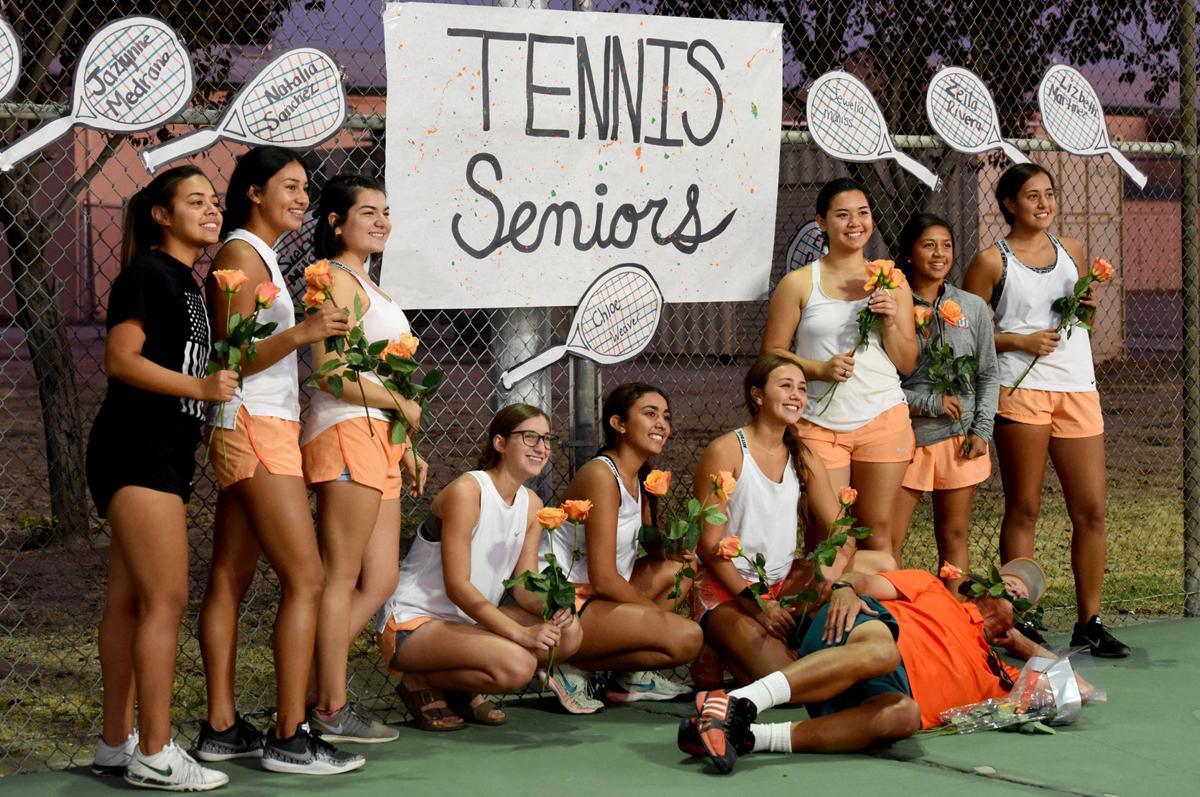 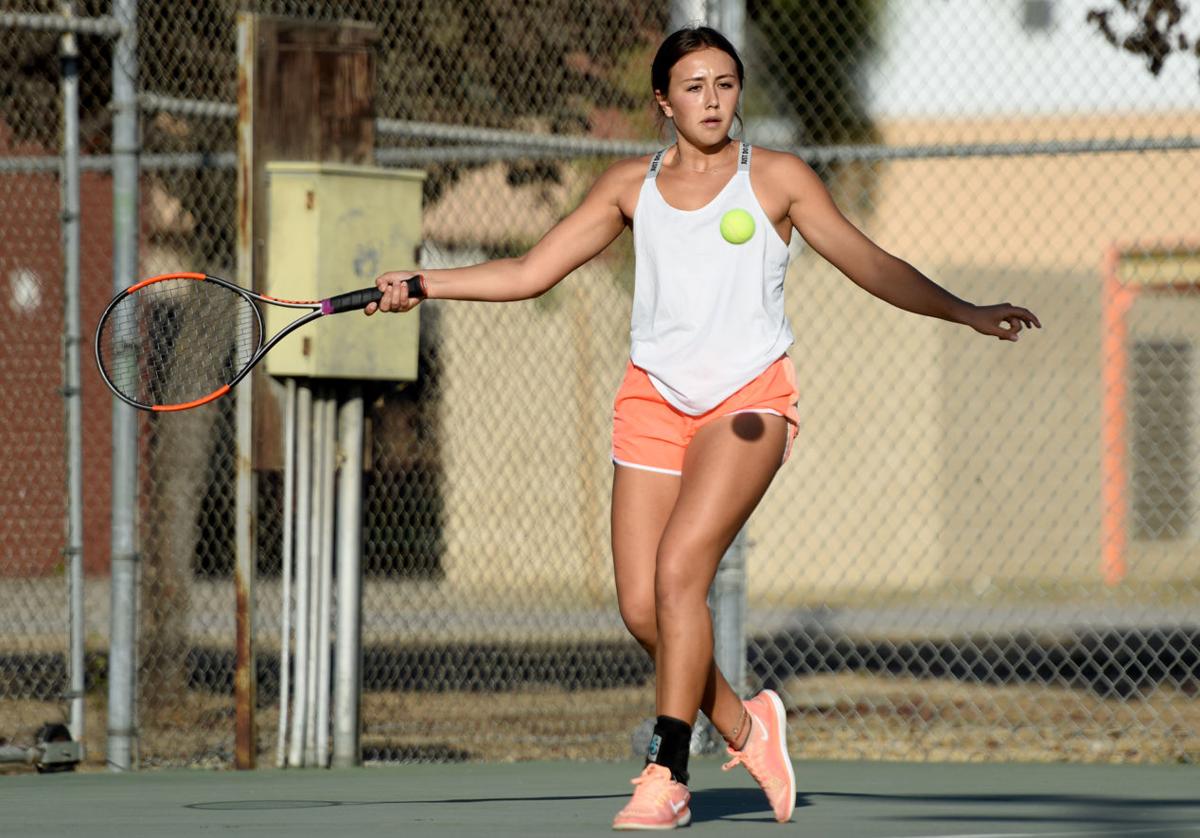 Porterville HC Kurt Nielsen is retiring in the spring

One chapter of Kurt Nielsen's coaching career began to close Monday afternoon as the Porterville High School girls tennis head coach watched his players play their final home match of their careers with him at the helm.

After 21 years coaching the girls program, Nielsen is retiring from high school tennis in the spring — after he wraps up 23 years with the boys' team.

For their coach's final East Yosemite League match at home, the Panthers (8-2 EYL) quickly wrapped up a 7-2 victory over rivals Monache to finish league in second place behind undefeated Tulare Western.

The Marauders avoided a sweep in doubles with Sotelo and Jenna Keller winning the No. 2 match 8-2, but No. 1 Maniss and Chloe Weaver won 8-4 while No. 3 Jazlynne Medrano and Dez Gomez won 8-2.

With a majority of the team being seniors, Nielsen said it was easier to step away from the game now rather than later with a new group. Of the team's top eight, the top five have played with Nielsen for the past three years.

“So much fun,” Nielsen said. “One of the reasons I'm retiring, because you can't really replace them. They're a close-knit group. They've grown up together. They've played basketball together. Just great attitudes. Fun, fun, fun. Great chemistry. I think I'm going to see some of them at PC, but as far as here, I'm going to miss them.”

Tennis will continue for Nielsen at Porterville College where he is the head coach of the women's tennis team.

In two-decades with the Panthers, Nielsen won 12 EYL titles in his first 16 years coaching the girls and also has three EYL titles with the boys team. In 2009, the girls won a Central Section championship then went to the Valley finals again in 2010 and 2011.

Nielsen and the Panthers begin his final playoff run on Wednesday, Oct. 30. Porterville is currently 16-5 on the overall season and Nielsen believes the team will be seeded somewhere around the sixth seed in Division III.

On what he'll miss from coaching at the high school level, Nielsen said, “Just the fun with the young people. Fun with teenagers and everything that goes with it. The cheers, the thrills, the tears. I mean you get frustrated cause things don't happen, you try to coach and they don'y listen. I mean it's teenagers and everything goes with it. But it's also a lot of fun. They're such a close-knit group.”

But a return to the high school scene isn't completely out of the question for the coach.

“I guess there's always a chance I can change my mind and come back,” he said. “But right now I'm going to try to turn my attention toward the boys in the spring and PC from now on.”

Monache is hosting the EYL championships this Thursday and Friday.

Attending from Porterville is Jewelia Maniss and Erica Palad in singles; Chloe Weaver and Sierra Mitchel in doubles as well as Zeila Rivera and Liz Martinez in doubles.

MHS head coach Gary Perez said that they'll also send six players but he was awaiting the results of Monday's seeding meeting to see where players will end up. One of the players going for Monache is No. 1 Abigail Sotelo.

“Looking to see if Abby can get a three or four seed,” Perez said. “She's been playing pretty well this year. She's had some good matches against the No. 1s, especially from Tulare.”