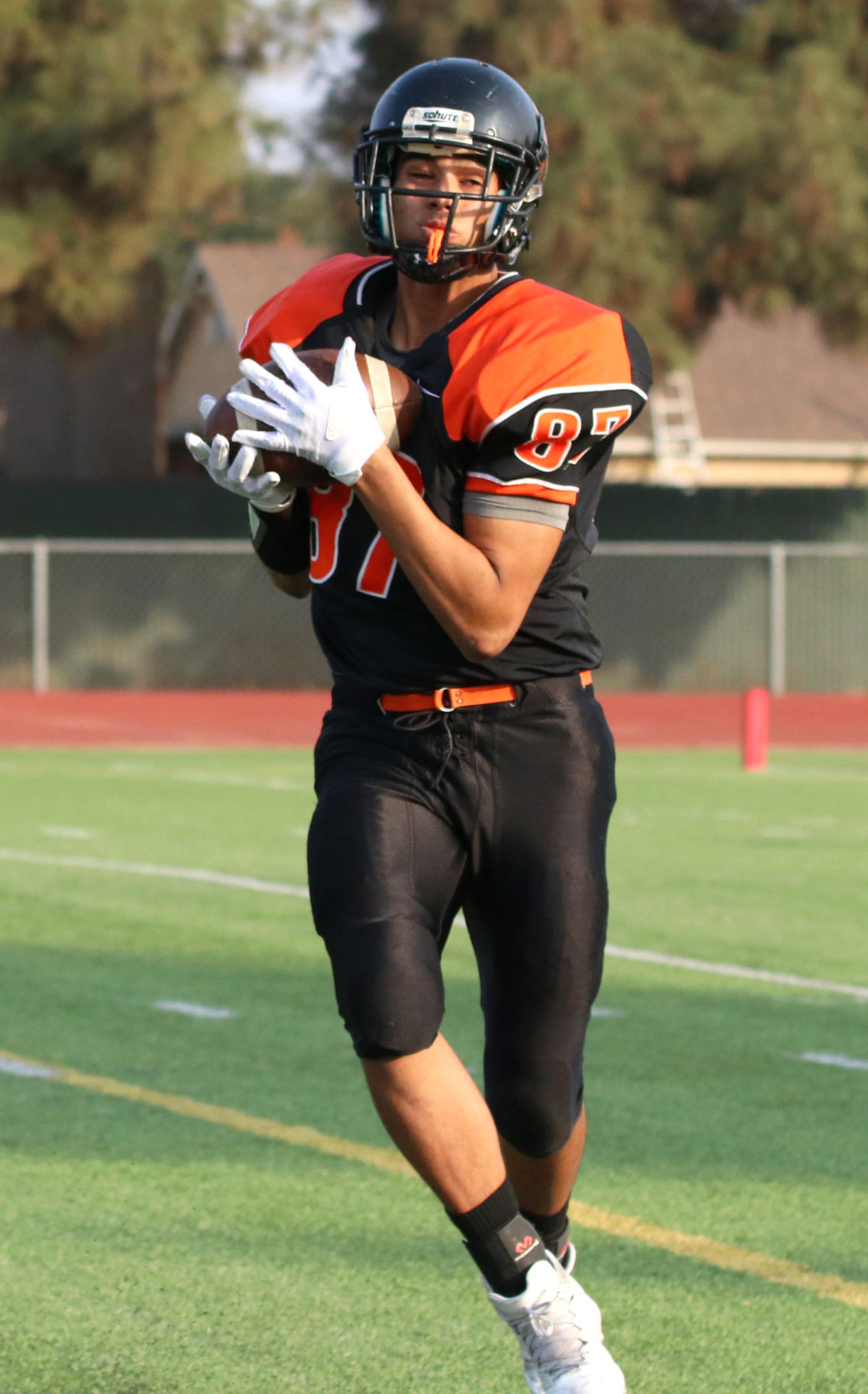 Reedley College's Daniel Baca, a Monache High School graduate, was named the MVP of the 2019 American Division Championship Bowl, a two-time All-Conference tight end and led all California junior college tight ends in touchdowns and receptions in 2018 and 2019. He will play for NCAA Division I Duquesne University.

Reedley College's Daniel Baca, a Monache High School graduate, was named the MVP of the 2019 American Division Championship Bowl, a two-time All-Conference tight end and led all California junior college tight ends in touchdowns and receptions in 2018 and 2019. He will play for NCAA Division I Duquesne University.

The mere mention of the city home to his favorite NFL team had Daniel Baca hooked.

A Pittsburgh Steeler fan since he was young, Baca received a call from Duquesne University’s tight end coach, Matt Stansfield, offering the Reedley College sophomore an opportunity to be near his favorite team while playing NCAA Division I football for the Dukes, a program in the Northeast Conference.

COVID-19 kept Duquesne from bringing Baca, a 2018 graduate of Monache High School, out to Pittsburgh, Penn. for an official campus visit, but Stansfield and head coach Jerry Schmitt offered Baca the one thing other programs hadn't offered — a full-ride scholarship.

“I put the phone on mute and I almost cried,” Baca said. “I kind of yelled but I like tensed up. Like my chest started beating. And I was like, ‘Woah, that’s a full offer! He said it.’”

The opportunity to play on a full-ride is bigger than football for Baca. On top of playing at Reedley, he worked three days a week in the fields, sometimes on the Sundays after game days, to afford his equipment, books and food.

On May 3 Baca signed his letter of intent to play for the Dukes in the fall. At Duquesne, Baca plans to major in sports information and media.

Baca overcame a lot to reach this level of success. In March of last year, he broke a bone in his foot and was out for three months. But he rehabbed and was ready for the team’s first game of the season, although it took him a while to trust his body again.

“When the first game came up I had no receptions. No receiving yards, no nothing,” he said. “The second game I had nothing. The third game, I think that’s when I caught my first ball and I started to feel good again with my foot. My routes were clean. I felt like I was a receiver, not even a tight end. I felt more loose honestly.”

Baca’s versatility at tight end constantly showed with the Tigers and he played a significant role in the team going 20-2 as back-to-back Golden Coast Conference champions in his two seasons.

“He runs extremely, extremely well,” Marty said. “Even though he’s a little light, he plays really physical and he’s got a lot of pops in those hips. And when he strikes you, when he goes to block somebody, he really brings a lot of force.”

In his time with the Tigers, Baca twice led the state’s tight ends in receptions and touchdowns, was a two-time All-GCC tight end and was selected the Most Valuable Player of the 2019 American Division Championship Bowl.

Baca scored a touchdown and had 56 yards in Reedley’s 23-14 championship win, bringing his sophomore season total to 413 yards and five touchdowns on 34 receptions. He said he was surprised to be named MVP because he thought he hadn’t done much but his coaches told him he’d been a big factor on third downs.

“That was my first MVP, first place for something, like by myself,” Baca said. “It was just weird cause I came from little Monache. I was going to quit, I didn’t think I was going to do all that. It was cool. I was really surprised I got the MVP. I was really happy too. I just didn’t want to show it. I feel like I would’ve over expressed.”

Baca never thought any of this was possible. Despite having multiple All-East Yosemite League honors and being a three-year varsity player, Baca didn't have any offers out of high school and had a tough time getting community college coaches to stay in touch or return his calls. On a senior trip towards the end of the school year Baca told a friend he was done playing football.

The next day, RC’s Marty reached out after watching his film and talking to Baca’s high school and future RC teammate, Austin Habich.

“I was really excited that he called me telling me that they wanted me to play cause I was just going to quit and go find a job,” Baca said.

At 6-foot-2 and 190 pounds, Baca ultimately drew Marty’s interest because of his length and ability to make “a lot of football plays”.

“He was an unknown commodity to everyone, myself included,” Marty said. “We go through the summer and I just remember him, he was open all the time. Just running by people, he runs exceptionally well. And none of the quarterbacks knew him at all, so I just kept telling him, ‘Hey man, eventually they’re going to figure out you’re always open and start looking to get you the ball.’ And eventually that kind of came to fruition.”

In the team’s season opener against De Anza, Baca caught two touchdowns — one for a career-long 54 yards and the other for 11 — to aid the Tigers’ 57-47 win. It was one of two two-touchdown games for the freshman. He finished the season with 449 yards and seven touchdowns on 28 receptions.

Going from high school to community college football did take some adjusting for Baca. He admitted he threw up after every practice in the first few weeks of training and that college was the first time he’d ever been hit so hard he was put on his back. He wasn’t the biggest player on the team, or even the biggest tight end, but he made sure to always make his presence known.

“Don’t let someone bigger than you, or faster than you, determine what you can do as a player,” he said.

After making an impact on every team he's been a part of, Baca looks forward to heading out to Pittsburgh in a few months for a new team and experience.

“I want to go to Pittsburgh, I want to see how Pittsburgh is,” he said. “I’ve never been to a big city.”

Another thing Baca's never done is go to an NFL game, but that will change when he gets to Pittsburgh.

“I’m going to go to every Steeler home game I can,” Baca said.