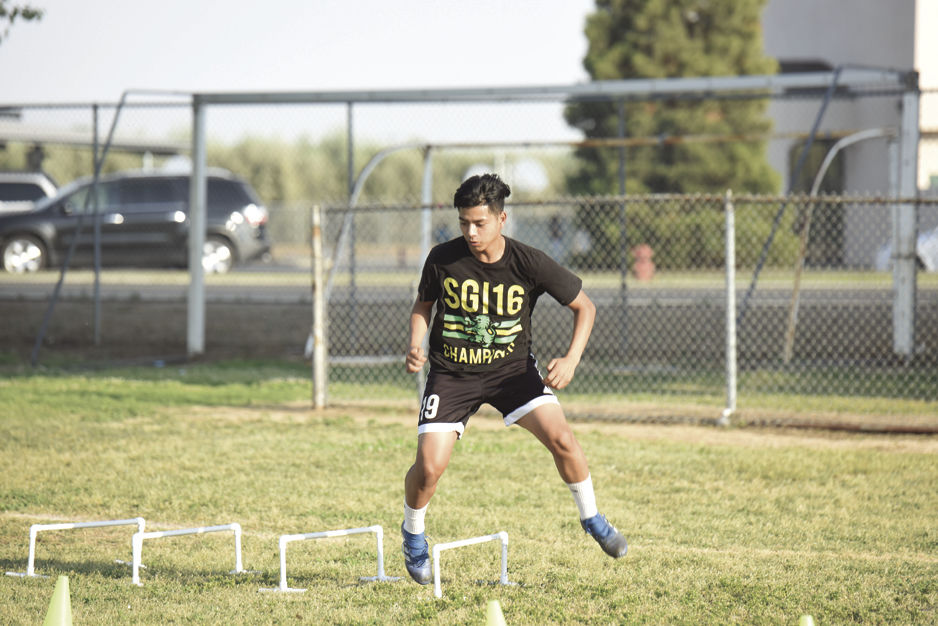 Daniel Ruiz trains with his father, Tuesday, May 7, at Terra Bella Elementary School. Ruiz is a member of the U-15 team of Club de Fútbol Pachuca, a professional soccer team in Mexico’s Liga MX. 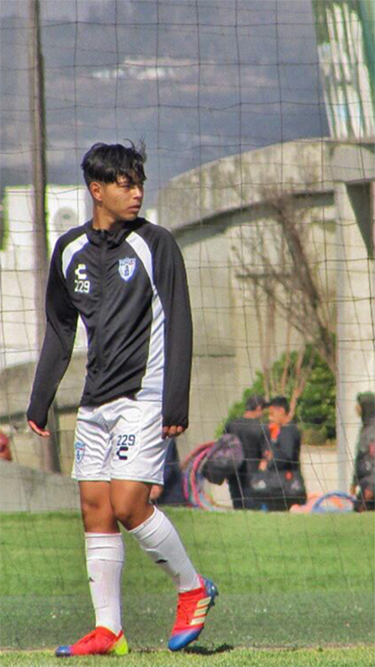 Daniel Ruiz needs clearance from FIFA before he can play in the club’s league games.

Daniel Ruiz trains with his father, Tuesday, May 7, at Terra Bella Elementary School. Ruiz is a member of the U-15 team of Club de Fútbol Pachuca, a professional soccer team in Mexico’s Liga MX.

Daniel Ruiz needs clearance from FIFA before he can play in the club’s league games.

Standing with a group of friends kicking a soccer ball around, Daniel Ruiz looks like any other kid relaxing after a long day of classes but Ruiz is different.

The Terra Bella native is back for a short visit from Mexico where he plays for the U-15 team of Club de Fútbol Pachuca, a professional soccer team in Liga MX. Ruiz is the first player from Terra Bella and possibly the area to play with one of Mexico’s top professional teams, according to his father Angel Ruiz.

It was a long journey getting there but the Ruiz family went all out to make sure Daniel could pursue his dream of playing soccer.

A big fan of Lionel Messi, the star of FC Barcelona and arguably the greatest soccer player in the world, Daniel started playing soccer because of his family, namely his older brother who is seven years older than him and would always make him come play with him.

Angel said that once he saw how much Daniel liked to play, he started the team and began coaching him.

Always being coached in some form by his dad, Daniel played for South Valley Chivas then another Porterville team before joining Fresno’s Red Star Liberty around three years ago. Under Red Star coach Jaime Iracheta, Daniel was provided with the opportunity to travel to Los Angeles where he was spotted by a scout from Pachuca.

After talks with the scouts, the Ruiz family made two trips to Mexico so Daniel could play in front of the them again at the team’s facility.

“At first I was nervous then I just got over it and just played,” Daniel said about playing in front of scouts.  He said he got over his nerves by just focusing on the game.

In the second visit to Pachuca, Daniel and one other player were selected out of over 100 other players by the team.

“What stands out about Danny is just the creativity of the way he plays and the vision that he has as an individual,” Iracheta said. “He’s very versatile. He can maneuver the ball with his left foot, right foot. Just the quickness that he brings to the game, he’s just a quick decision player. He knows how to read the game really well.”

But it was almost six months before things became more official.

Daniel, who would’ve likely attended Granite Hills High School where his dad coaches junior varsity, went to school in the family’s hometown of Michoacán before returning back to the United States in the summer.  In July of last year, the family finally received a call that Daniel was accepted to go to Pachuca and attend school there as well. And on August 22, 2018, Daniel joined the team.

“It’s sad,” Angel said about having to leave Daniel. “Like two days — the first time we left him — I cried. That was the first time I ever cried and it was hard because I was with him everywhere we played. I’ve had him since he was a kid.”

Daniel admitted the separation was hard on him too, and besides friends and family, he really misses his mom’s cooking.

But at Pachuca, Daniel is doing well. He’s still waiting on clearance from FIFA (Fédération Internationale de Football Association), the world’s governing body of soccer, to approve him to play league games and not just friendlies and tournaments, but he’s already been moved up to play with players a year ahead of him. They also have him playing three positions — striker, winger and attacking midfielder.

“He’s doing really well,” Iracheta said. “He’s been moved up from his age group, from his 2004 category. He’s been practicing and playing with 2003. That’s huge playing in a professional Mexican academy. The players are much more physical. The Mexican players grow a lot quicker than the United States players. So for him to be able to adapt in the short period of time, he’s doing really well.”

Playing and staying at the club facilities also gives Daniel a chance to see some of Pachuca first team’s players but he said he isn’t quite ready to talk to them.

“It’s awesome,” Daniel said. “Just watching them play, you learn a lot from them. … We see them. There’s chances where we actually get to talk to them but I haven’t done that yet. I haven’t got the chance yet — the courage.”

So far, waiting for the clearance is the hardest part for the family. One of Daniel’s teammates has been waiting on his for two years and it makes Daniel nervous. But regardless of how long it takes, the family says they’re prepared to wait.

“We’re going to wait until he’s been accepted,” Angel said. “Then he’ll be a part of the club and we’ll see what happens from there.”