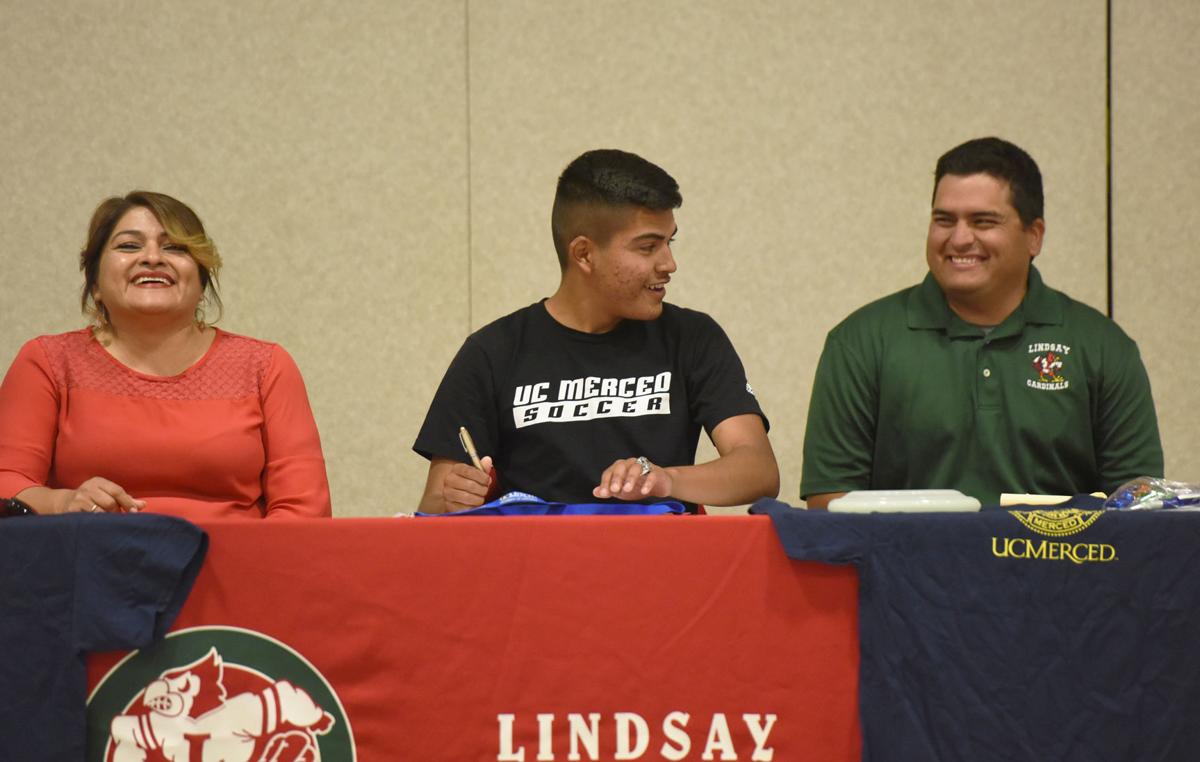 Lindsay High School's Alberto Gutierrez, center, shares a laugh with his high school coach, right, and his mom, left, after signing a National Letter of Intent to play for the University of California, Merced men's soccer program, Friday, May 3, 2019, at Lindsay. 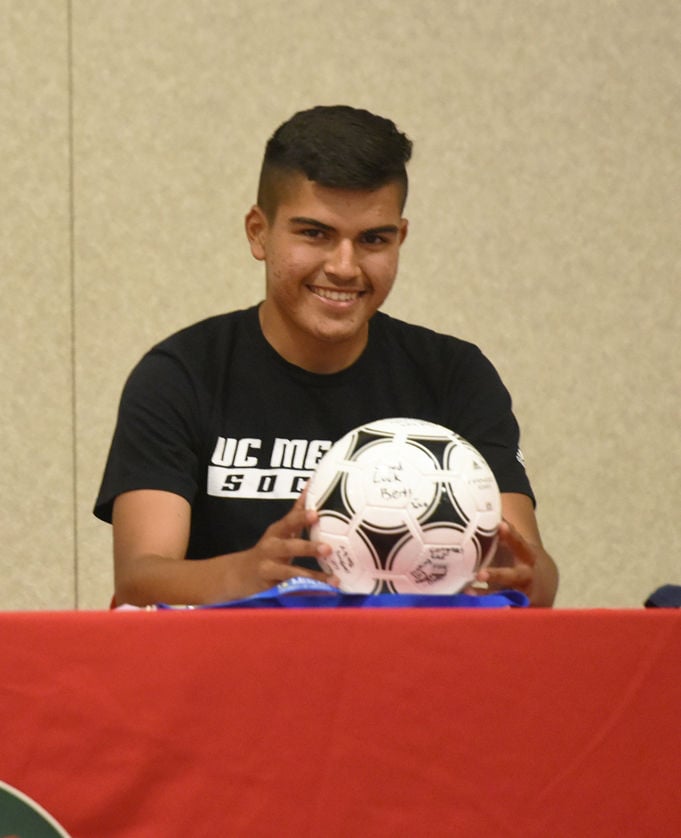 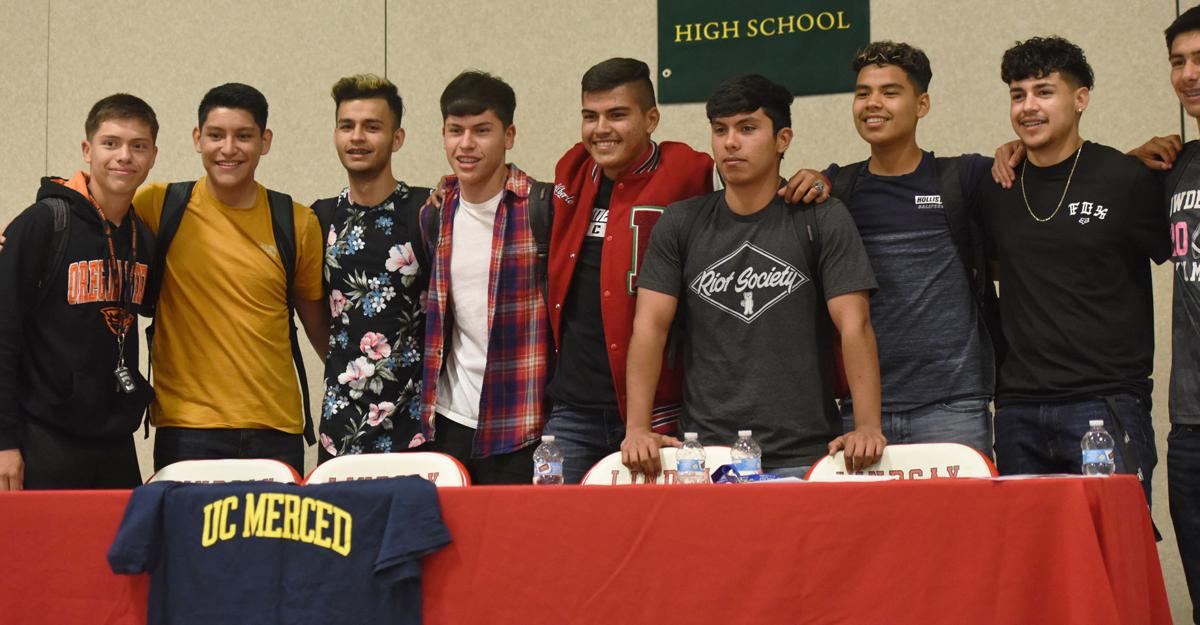 Lindsay High School's Alberto Gutierrez, center, shares a laugh with his high school coach, right, and his mom, left, after signing a National Letter of Intent to play for the University of California, Merced men's soccer program, Friday, May 3, 2019, at Lindsay.

It was an emotional signing day at Lindsay High School as senior goalkeeper, Alberto Gutierrez, made his commitment to join the University of California, Merced men’s soccer program official by signing a National Letter of Intent Friday in front of family and friends.

With the signing, Gutierrez becomes the third Cardinals men’s soccer player to join the Bobcats — an NAIA program playing in the California Pacific Conference. Both Lindsay graduates, Marcos Ceballos and Agustin Valdovinos, currently play for Merced as midfielders.

The signing was relieving for Gutierrez who was determined to continue his soccer career by playing for the Bobcats.

Gutierrez, a two-year varsity starter, helped Lindsay to two straight East Sequoia League championships, two Champions Cups and two Lindsay Cup Championships. He moved up to varsity in his sophomore year and was part of the squad that won the CIF Central Section Division IV championship in 2017 and helped lead the team back to the Valley finals the following year. This season he captained the Cardinals (16-7-3, 10-2 ESL), where he finished with 109 saves and seven shutouts in 26 games. His overall career record is 38-8-5. Gutierrez was also awarded the Cardinal Award this year. It’s an award given to “a person who exemplifies what it means to be a Cardinal, on and off the field.”

“We are very thrilled to be adding Albert to our program here at UC Merced,” Martins wrote. “In getting to know Albert, what stands out is his drive to be great. Whether it’s on the field or in the classroom. Watching him play, you see his competitiveness. You see he wants to improve every time he steps on the field.”

According to the Bobcats’ roster, they’ll graduate two of their three goalies from last season and will return last year’s freshman goalie who played in seven games but did not start. It’s unknown if Merced plans to sign another goalie but Gutierrez is just focused on becoming the starter.

“I’m looking to take that starting spot,” Gutierrez said. “I want to play on the field. I want to show UC Merced what I can do and why they chose me to be a part of that program. Hopefully immediate impact, but if not, I’m going to work my way up to it and imma make an impact for sure.”

On the transition to the college level, Gutierrez added, “I wouldn’t say like a normal thing but it’s going to be tough. It’s a whole different level of playing. This isn’t high school, these aren’t kids anymore. These are grown men that you’re playing against. And I know that right now, I’ve been training already, these past few months, just to get ready for that college level. And I know what to expect. It’s just going to be a different type of level of playing that imma have to get used to right away.”

One thing that Gutierrez was constantly praised for, from Martins, Langton to LHS head coach, Tony Godoy; was his academics. The senior said he chose Merced for their academics as well and plans to major in computer science and engineering.

“Academically, even though it’s new it has a [great] reputation and it’s a really nice campus,” Gutierrez said. “Even though it’s kind of far out, not too close to anything, it’s still a nice campus. And it still has this learning vibe, close to home but you’re still there to learn and that’s kind of why I chose this campus.”

Being close to home is important for Gutierrez and his family. The Gutierrez family are well known for being at every one of Alberto’s games and his dad played a large part in getting Alberto all over California so he could pursue his dream of continuing soccer after high school. In a speech thanking those who supported him, Gutierrez was brought to tears while talking about his family.

“It’s a great feeling,” the elder Alberto said. “Because Albert started playing soccer when he was almost 12 years old. So he didn’t start when he was a little kid. And he wasn’t even a goalie to begin. It just happened that someone asked him to be a goalie and he wanted to do it and he loved that position and look where he’s at now. He was able to sign with UC Merced and as a parent, you can’t not feel more proud than that. Not just because he’s an athlete but he’s also a great student academic wise.”