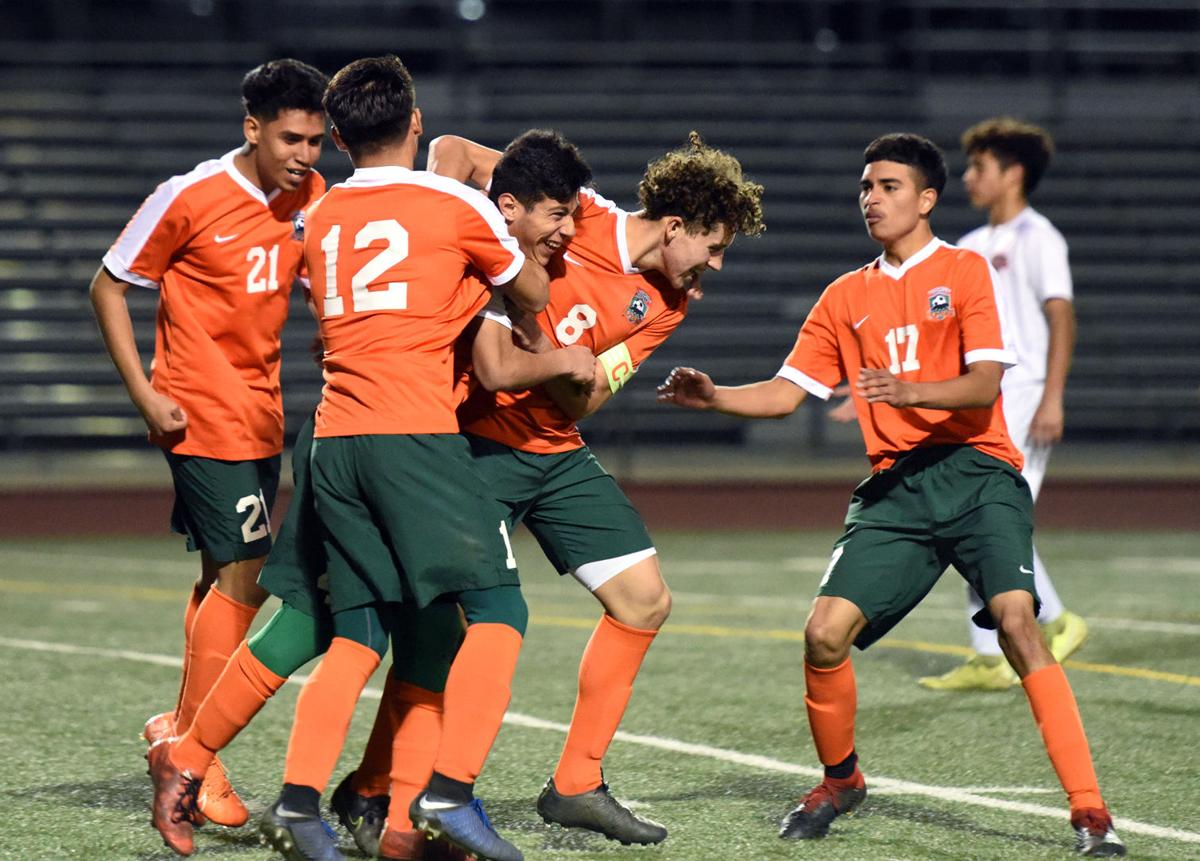 Porterville High School's Ivan Suarez (4), third from left, is swarmed by his teammates after scoring a goal against Selma High School in the second half of a CIF Central Section Division III opening round game, Tuesday, Feb. 11, 2020, at Jacob Rankin Stadium. 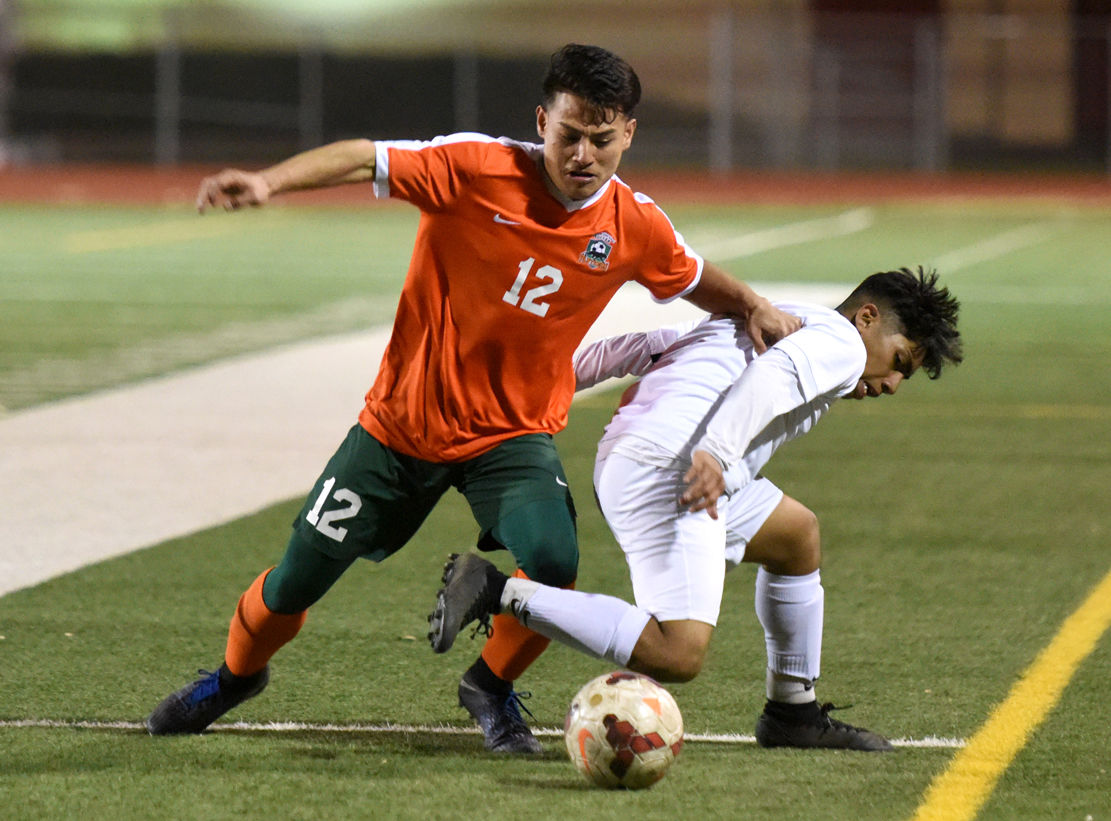 Porterville High School's Abraham Cardenas (12) goes after the ball during the second half of a CIF Central Section Division III opening round game against Selma High School, Tuesday, Feb. 11, 2020, at Jacob Rankin Stadium. 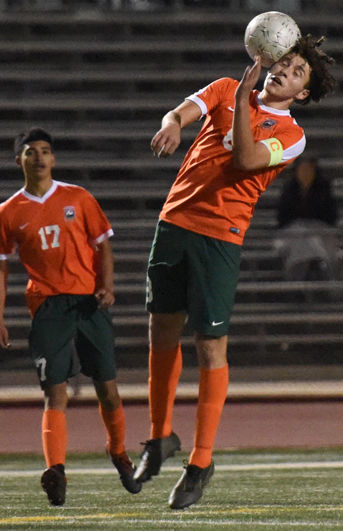 Porterville High School's Ivan Suarez (4), third from left, is swarmed by his teammates after scoring a goal against Selma High School in the second half of a CIF Central Section Division III opening round game, Tuesday, Feb. 11, 2020, at Jacob Rankin Stadium.

Porterville High School's Abraham Cardenas (12) goes after the ball during the second half of a CIF Central Section Division III opening round game against Selma High School, Tuesday, Feb. 11, 2020, at Jacob Rankin Stadium.

The Porterville High School junior had at least two chances to score the necessary third goal but at the end of the day it was the win that mattered more.

“This game is like a memory,” Suarez said after the game. “A memory. I hope I can keep doing the same.”

Suarez opened up scoring for sixth-seeded Porterville (14-9) with two goals at the start of the second half in Tuesday's 3-1 opening-round win over 11th-seeded Selma (11-9-2) in the CIF Central Section Division III playoffs. The Panthers' next game is a quarterfinal matchup at third-seeded Lemoore (16-6-3).

Porterville's first playoff win since 2016 came together in the second half after a slow, scoreless first at Jacob Rankin Stadium.

“I was telling them at halftime it was 0-0, we were hanging in there and I thought we were the better team in that first half, even though it was sloppy,” PHS head coach Eddie Gutierrez said. “We created better chances, we just couldn't … we had a couple headers right there and a couple shots that were nowhere near scoring. Sometimes it's like that in playoffs, you don't want to get scored on right away.”

But that's exactly what the Panthers did in the second half — scored right away.

Right on the whistle to start the half, the Panthers played the ball back, using a couple passes to get the ball to Devin Patel on the right side of the field then to Suarez, who came flying up the left and crossed through the middle to stretch out for a shot that went past the goalkeeper for the first score of the game.

“I was just amazed,” Suarez said. “I didn't see it coming. Just saw the pass, the player made a mistake, (I) controlled it and shot. I was just shocked for a bit. I was like what the heck?”

On the goal, Gutierrez said, “It was good play, we work on playing like that. Simple, quick passes. They did it and they executed. I think we played the ball back, went forward on four passes and scored so it was within a minute.”

Four minutes later it was Suarez again with another big goal, this time a rocket from near the top of the penalty area that came off a bad clearance by Selma from a header attempt from PHS' Nickolas Ward on PHS' Kevin Gil's corner kick. The clearance sent the ball right to Suarez, who didn't even think before he took his shot.

“The second one, I saw it coming towards me and I just swing my leg,” Suarez said. “Like I didn't place it or anything, I was shocked.”

Porterville's final goal came in the 19th minute on a long, powerful shot by Abraham Cardenas.

“We scored some nice goals in the second half, took advantage of our chances,” Gutierrez said.

After struggling with offsides calls the entire game — the Bears were called for offsides four times in a span of four minutes at the end of the first half — Selma finally scored with seven minutes to play in regulation.

“I thought we played OK defensively,” Gutierrez said. “They had a few chances, they had one where they scored that was pretty close to offsides. But every time we play on this turf it's tough for us, we normally don't play on this stuff.”

The Panthers' next game will be on grass in Lemoore. The Tigers defeated the 14th-seeded Eagles of Templeton (11-9) 3-1 in their opening-round game at home.

“They are good,” Gutierrez said. “They've beaten some teams that we lost to and they've gotten some good results. But I mean playoff soccer is just kinda, anything can happen. So we'll see. They're the three seed for a reason.”