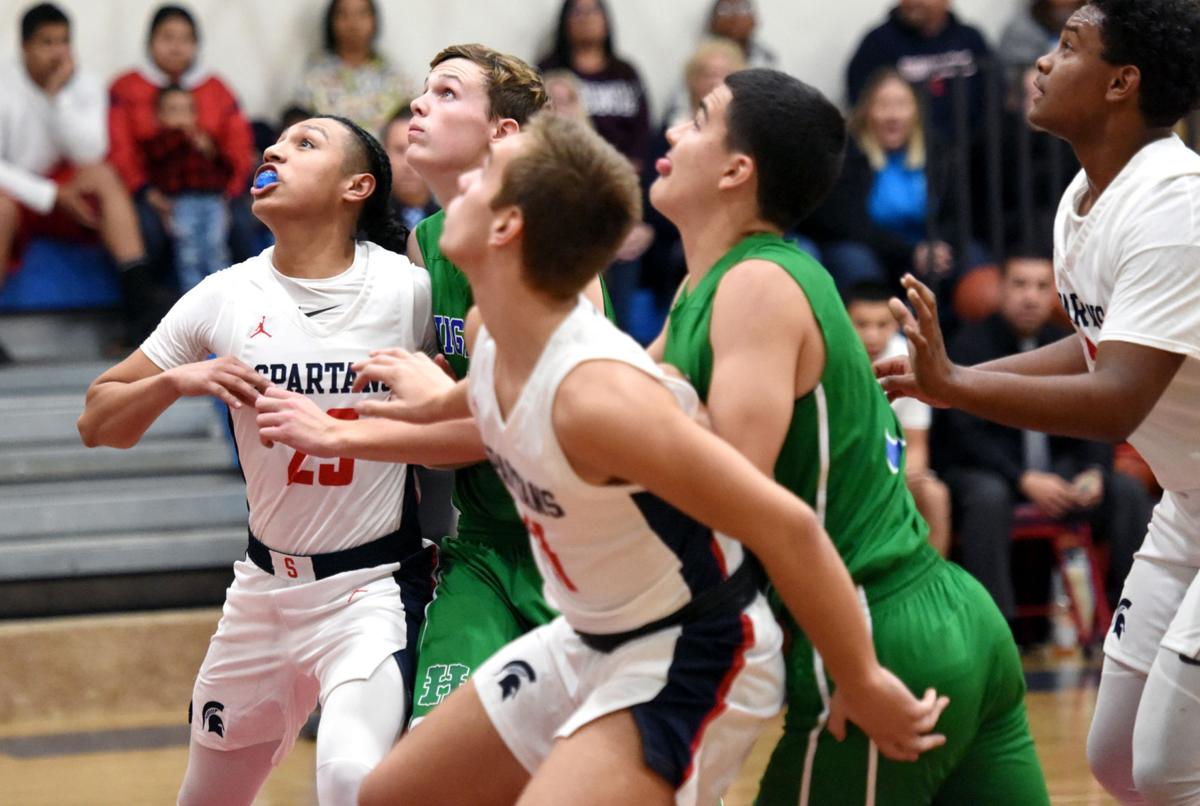 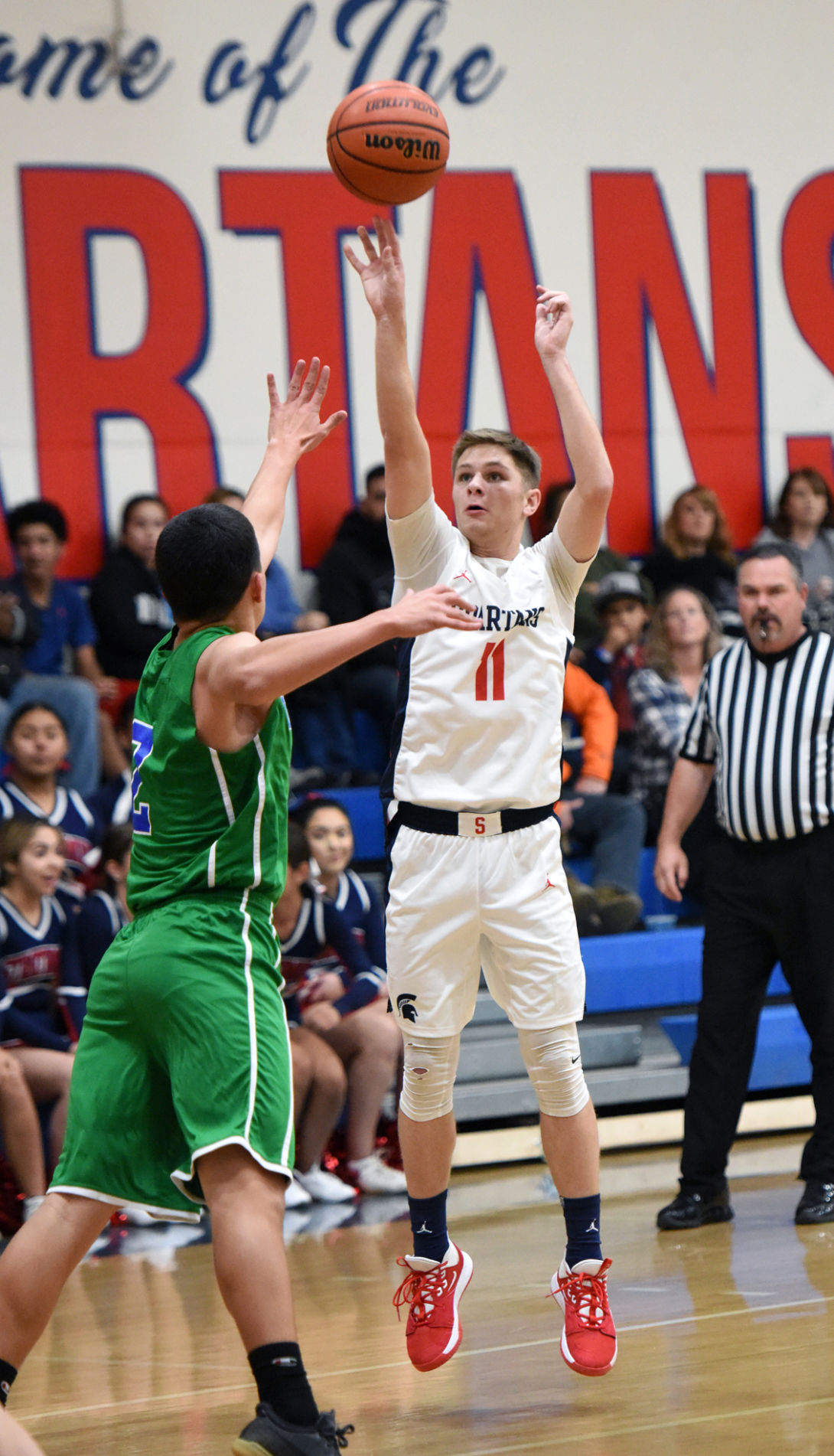 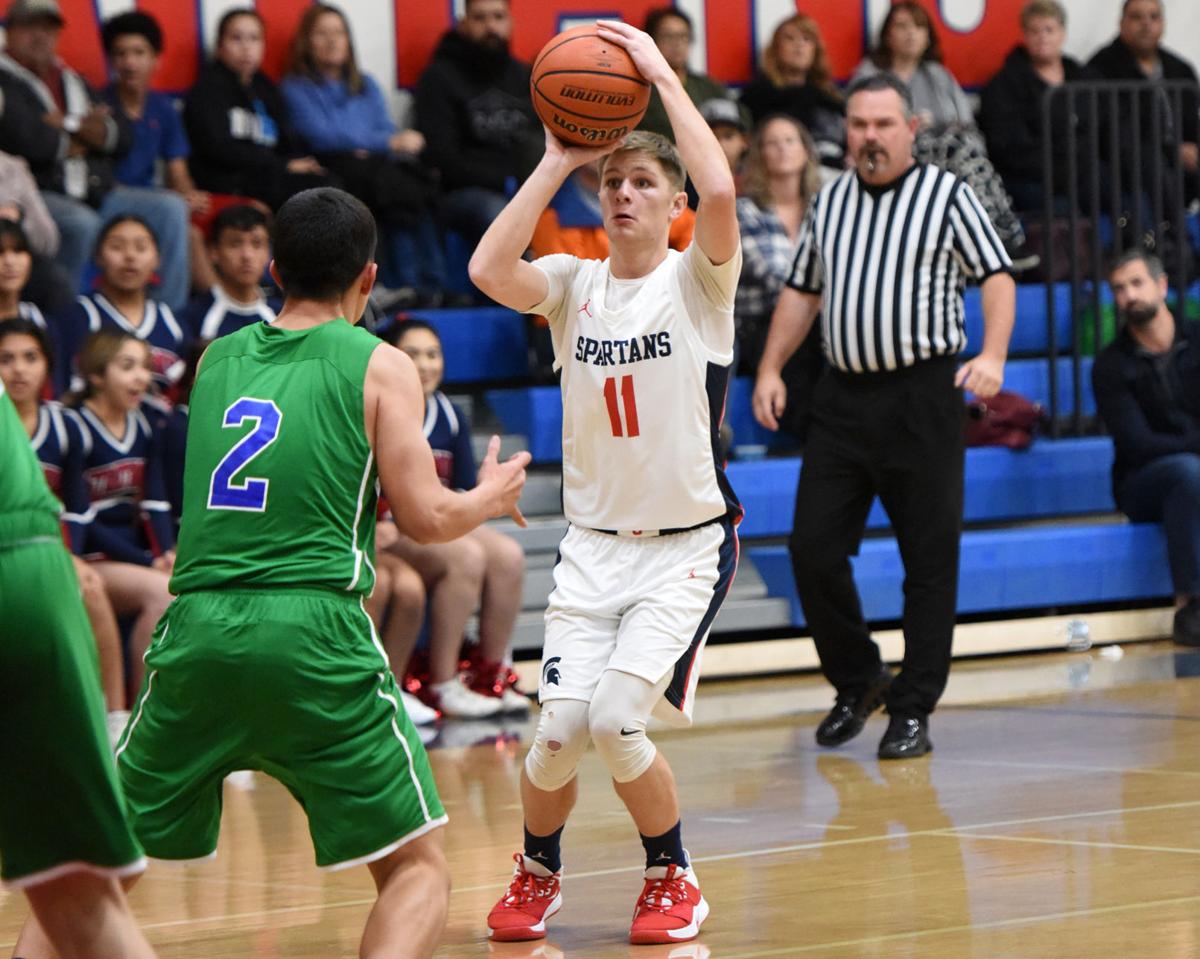 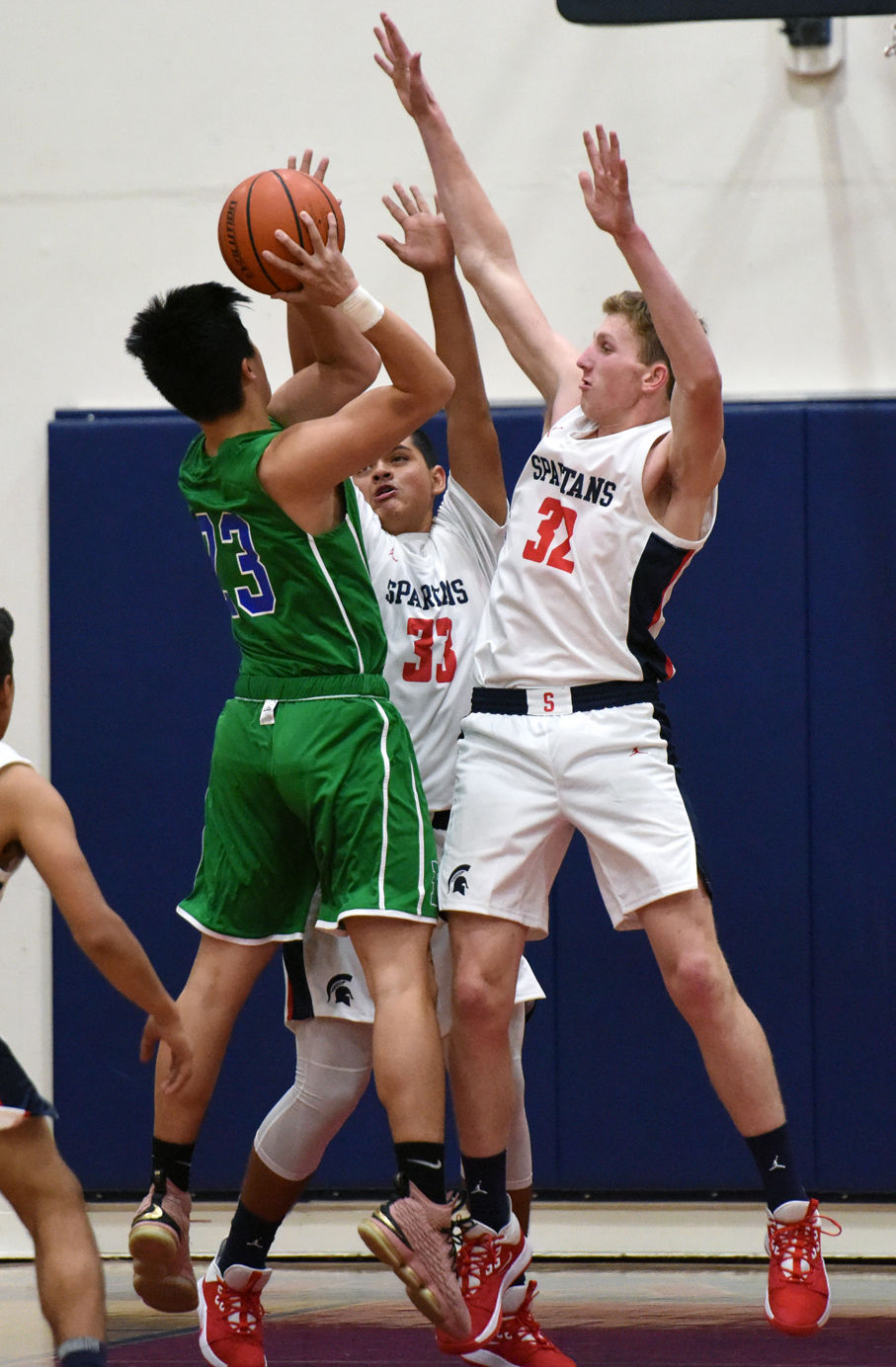 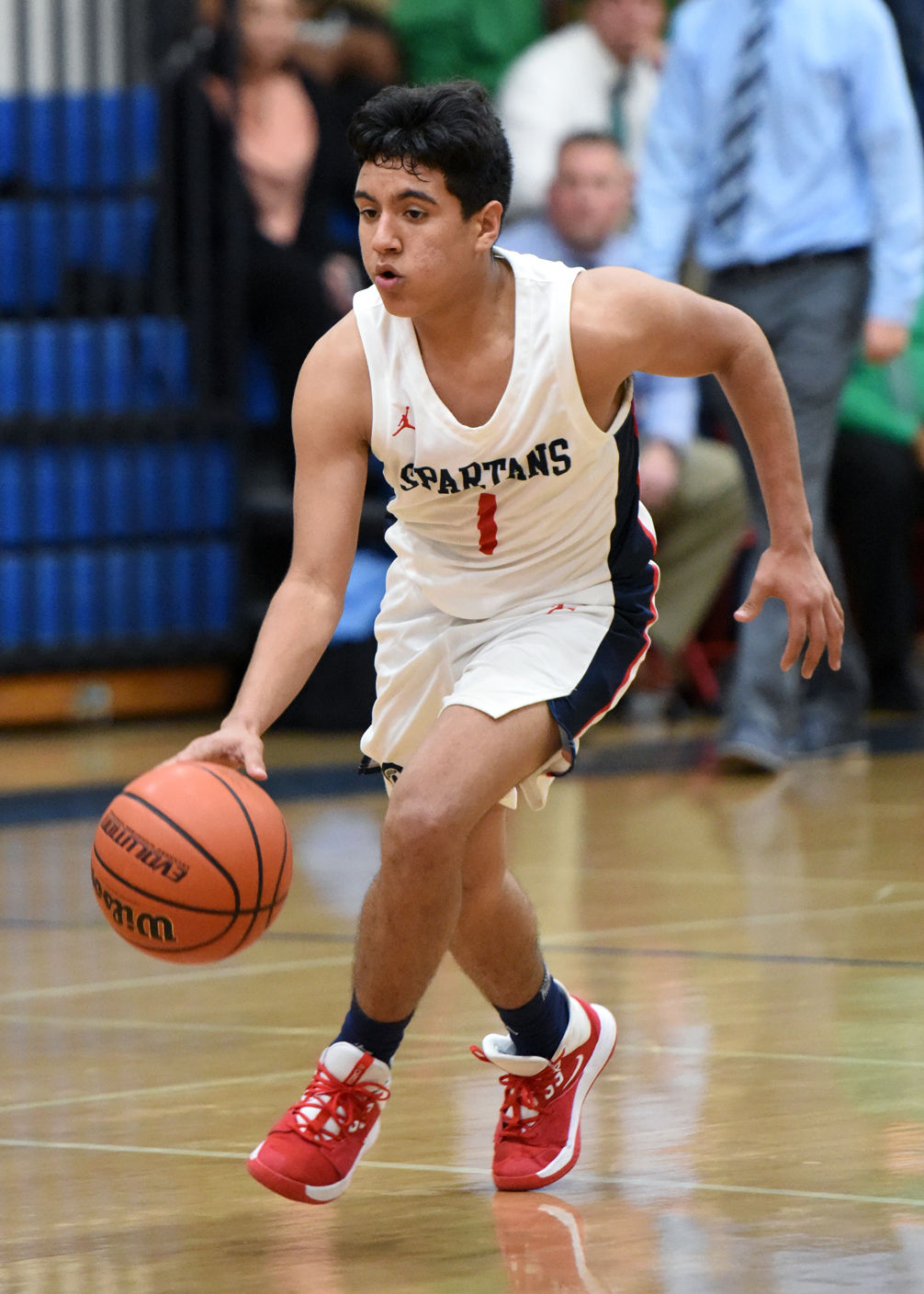 There’s a fight in the boys basketball program at Strathmore High School that’s hinting at good things for the Spartans this season.

An example of the team’s will to win was their 76-73 double overtime victory over Bakersfield’s Highland Scots (2-1) at home Tuesday.

“That was a big win for us last night,” SHS head coach Justin St. Clair said. “That’s a Division V playoff opponent for us potentially. I was really happy with the kids, and they hung in there, especially the last (minute and 30 seconds) of that fourth quarter. We could’ve folded pretty easily but we made some things happen and we were able to pull off that win.”

Highland opened the fourth quarter with 11 unanswered points before Strathmore senior William Reece could end the Scots’ scoring run with a steal on an inbound pass to score an easy layup.

Late in the quarter, Spartans sophomore guard Robert Bojorquez knocked down a free throw to give Strathmore (3-1) a 53-51 lead but Highland’s Isaiah Pitino muscled his way through Spartans defenders to tie the game. Pitino, was fouled by Strathmore’s Manuel Andrade on the shot, but he missed the free throw and a deep three-point attempt from the Spartans’ Kyle Oliveira fell short, sending the game to overtime.

That’s where Reece, Bojorquez and senior center Owen Patterson, came up clutch in every aspect of the game. Reece and Bojorquez knocked down big shots and came up with key steals while Patterson played strong defensively.

In the first overtime the Spartans trailed 60-58 with 26 seconds to go when Reece got a steal and scored on a fast break. When the Scots went to inbound the ball, Borjorquez stole the ball and went up for a layup. He was fouled on the shot and hit both free throws to give Strathmore a 62-60 lead. The Spartans could’ve won it there but the Scots’ Bryant Espinoza shot went in at the buzzer to force another overtime.

Strathmore took over in the second overtime, opening with a 7-0 run thanks to shots from Bojorquez and Reece. The 74-73, go-ahead score also came from Reece on another layup before the Spartans sealed the win by going 2-for-4 from the free throw line.

Reece led the team with 23 points, Bojorquez had 21 and Patterson chipped in 10.

On Reece, who is averaging 19.3 points a game, St. Clair said, “He is the heart and soul of our team. Kid never stops working hard and you know there’s a reason why his was first-team all-league last year and our MVP.

“William’s the key to our defense and he just makes so many things happen for us. Creates a lot of turnovers in our press. He’s just an extremely hard worker. Gets a lot done.”

The Spartans led 34-26 after the first half and 45-38 after the third quarter. One of their biggest strengths throughout the game was in their defense, led by Patterson under the basket. They ran a full court press at times and Patterson's hustle was rewarded with rebounds and a couple of blocks too.

“He makes a lot happen for us,” St. Clair said. “He’s really athletic for being (6-foot-5). He gets up and down the court pretty easily. He changes a lot of shots too. But we put him in some bad spots last night in our press, and our guards really gotta work on that.

“He’s still working on his offensive game. But once he gets everything put together, he has the ability to hit three’s too. So should be a big season for him we’re hoping.”

Monday was Strathmore’s first practice as a whole team with all players back from fall sports, and from what St. Clair has seen, the Spartans are starting off well.

“This is probably the deepest team that I’ve had since I’ve been here,” the coach said. “We have a lot of kids who can score with the ball. We only had one practice before the game last night, so we had our fall kids coming out. A couple weeks and I think we’ll definitely benefit from the first four games that we played.”