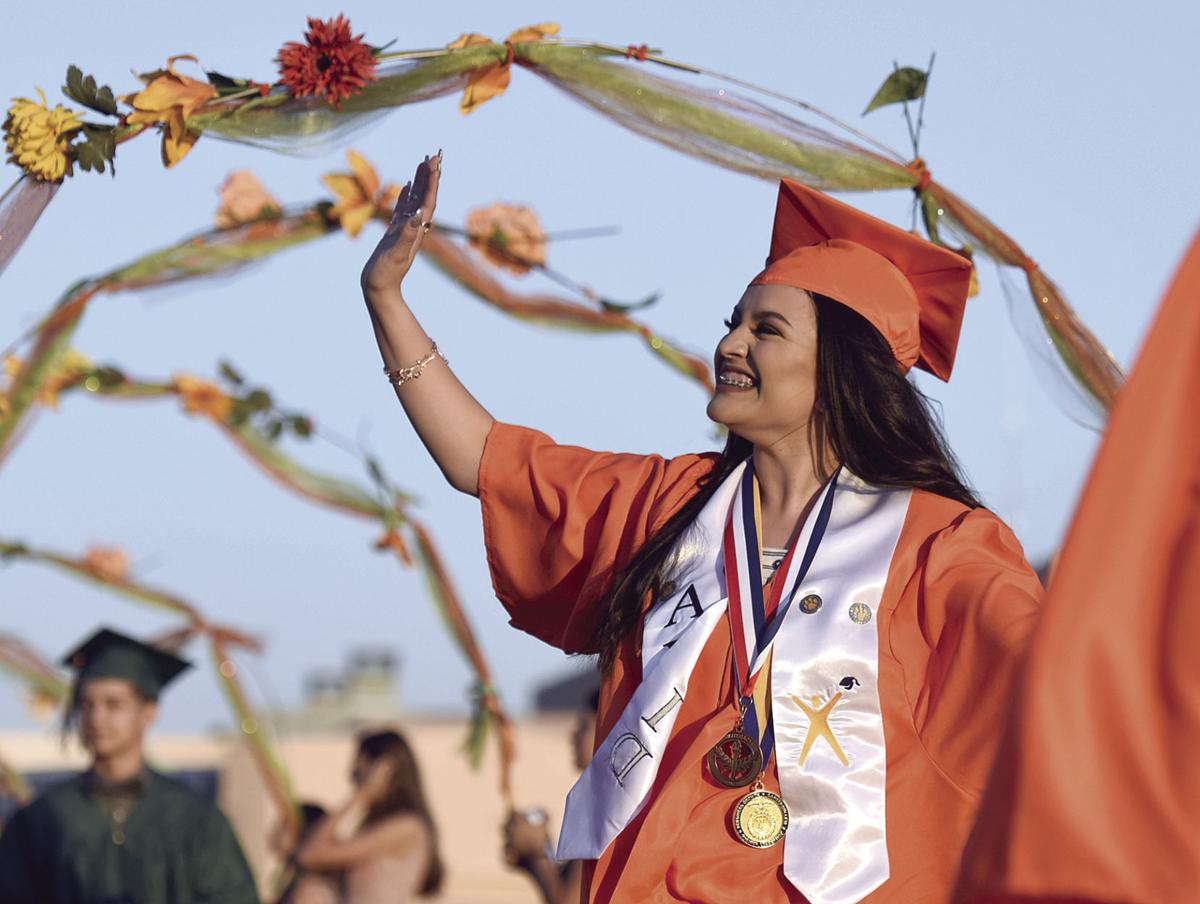 A graduating senior waves to her family and friends while walking down the track Tuesday, June 5 at the annual Porterville High School Commencement ceremony at Jacob Rankin Stadium. 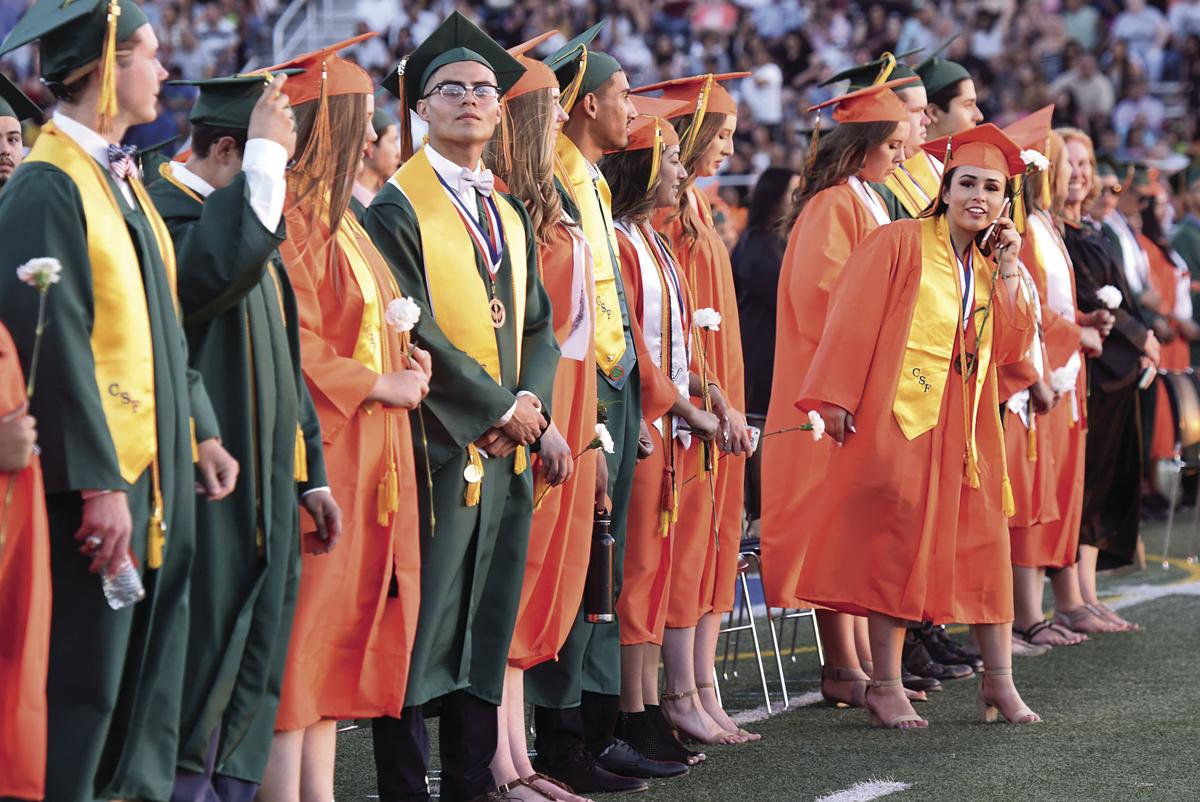 A graduating senior waves to her family and friends while walking down the track Tuesday, June 5 at the annual Porterville High School Commencement ceremony at Jacob Rankin Stadium.

Porterville High School’s Class of 2018— 421 strong— took center stage at Rankin Stadium Tuesday in front of a crowd of thousands that filled up both the home and visitor grandstands and beyond.

With the women in the traditional orange caps and gowns and the men in green, two lines of graduates entered the stadium through a series of orange and green flowered arches held aloft by members of the Panther Band auxiliary before converging at the north end of the stadium and high-fiving faculty members on the way to their seats in the middle of the field.

“Our graduation should serve as a launching point for directing us to wherever our futures are meant to take us, whether we land ourselves a career or continue our education in college,” said ASB president and graduate Hailey Johnson during her welcome comments. “Congratulations to the Class of 2018 and never forget— once a Panther, always a Panther.”

The valedictory-by-committee speech was given by all eight valedictorians: Matthew Day, Mark Inman, Kevin Leyva, Jennifer Mawson, Joshua Reagan, Jennifer Smithey, Brianna Torres and Shelby Whinery. Each spoke two to three sentences before moving to the back of the line and making way for the next speaker at the podium.

“Today we stand resolute welcoming the endless possibilities that await the class of 2018,” said Leyva during his portion of the speech. “Together we will change the world in our own unique ways.”

“Success can be defined and measured in many ways, but I believe the most important kind of success is when you are most happy and content with yourself and the life you are living,” added Smithey. “Congratulations, Class of 2018. Adventure awaits.”

Torres then gave the valedictory speech in its entirety in Spanish.

During his final comments to the Class of 2018, PHS principal Jose Valdez encouraged graduates to join him in giving two appreciative rounds of applause to those have who supported them: parents and teachers.

He then bestowed his final commendations on the class by highlighting some of their many achievements and success stories: Grant Snyder’s full-ride water polo scholarship to attend the Air Force Academy, a district-high 62 students graduating with bi-literacy seals, the 30 students who earned a 4.0 GPA or higher, and a PHS record 43 percent of graduates who met the A-G preparatory requirements for entrance into a four year college.

Valdez also acknowledged Azlynn Duke, who graduated from PHS after already earning an Associate Degree from Porterville College in May. Duke will attend Fresno State in the fall as a junior.

He proudly listed some of the prestigious universities to which other 2018 PHS graduates have been accepted: Stanford, Berkeley, UCLA, UC Davis, UC Santa Barbara, Humboldt State, Santa Clara, Pepperdine and several others. Eleven seniors were accepted to Cal Poly San Luis Obispo.

“This is truly an exceptional class, both in and out of the classroom,” said Valdez. “You all have worn the Orange and Green proudly over the last four years. Best wishes, and may all your dreams come true.”

With PUSD board members Lilian Durbin and Tom Velasquez on hand to offer their congratulations to two streaming lines of graduates as their names were called, all 421 diplomas were conferred in about 30 minutes.

As Valdez gave graduates their final instruction to move their tassels from the right to the left, his voice through the PA system was nearly overtaken by the sounds of air horns and enthusiastic cheers and applause from the stands.

The audience joined graduates in singing the Orange and Green, then the class dispersed to the grassy area north of the field to be greeted by friends and family.

Brothers Jason and Joey Nasca, like many other graduates before them, expressed mixed emotions on the occasion.

“I feel relieved,” said Jason, who plans to attend College of the Sequoias and study music. “It’s all very exciting, but I’m not sure what I’m going to do next.”

“It’s overwhelming,” added brother Joey, who will either join the military or head off to college as well. “But I have some thinking to do.”

Maria Chavez, who will attend PC and then transfer to Bakersfield State to study teaching, is also excited to be finished with high school, but admits to being a bit nervous about the world of possibilities ahead.

“I’m a little bit scared. I’ll definitely miss all my friends and teachers at PHS,” she said.