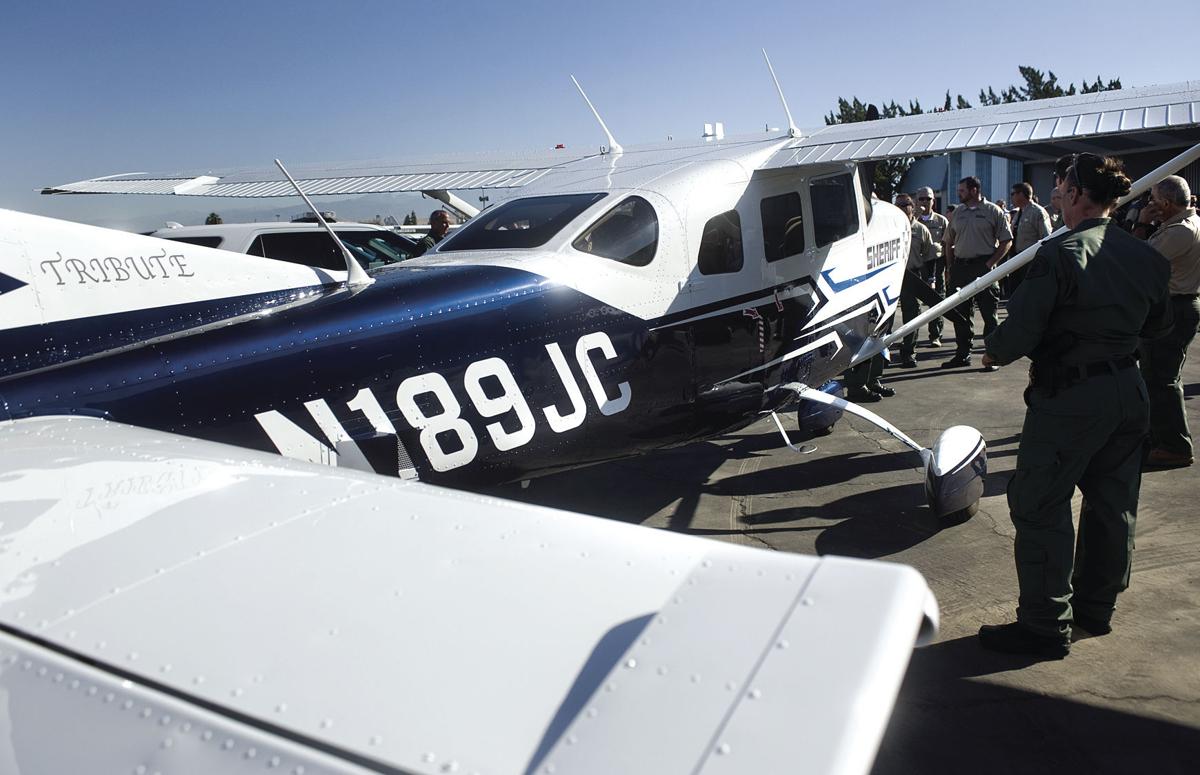 One of the Tulare County Sheriff’s Office’s new aircraft, Tribute, is named in honor of two personnel, Officer Scott Ballantyne and civilian pilot James Chavez, who died when Sheriff One crashed in February of 2016. Its tail number is the combination of Ballantyne’s badge number, 189, and Chavez’s initials, JC. 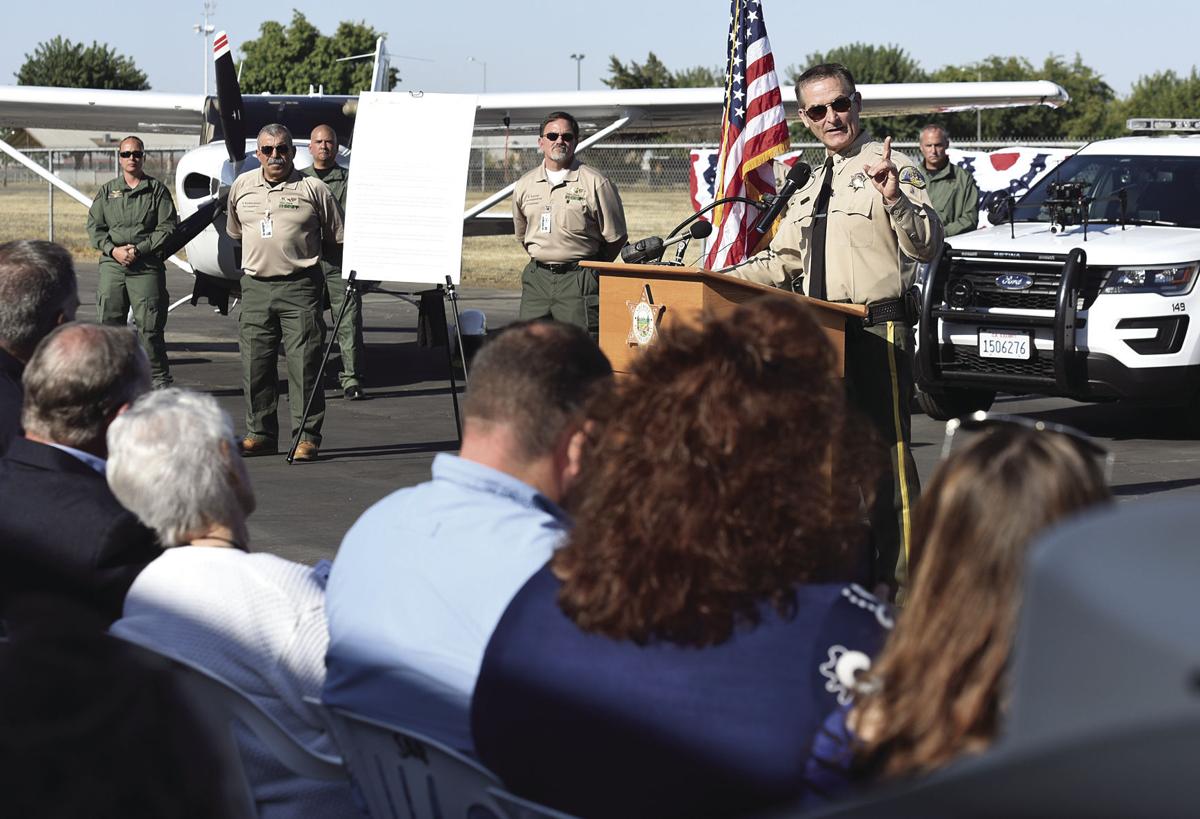 Tulare County Sheriff Mike Boudreaux announces the names of the department’s two new planes, Tribute and Wren, Wednesday at the TCSO Aviation Support Unit open house at the Porterville Municipal Airport. Wren is named in honor of Deputy John Wren, who was the first deputy killed in the line of duty on July 5, 1889.

One of the Tulare County Sheriff’s Office’s new aircraft, Tribute, is named in honor of two personnel, Officer Scott Ballantyne and civilian pilot James Chavez, who died when Sheriff One crashed in February of 2016. Its tail number is the combination of Ballantyne’s badge number, 189, and Chavez’s initials, JC.

Tulare County Sheriff Mike Boudreaux announces the names of the department’s two new planes, Tribute and Wren, Wednesday at the TCSO Aviation Support Unit open house at the Porterville Municipal Airport. Wren is named in honor of Deputy John Wren, who was the first deputy killed in the line of duty on July 5, 1889.

Tulare County Undersheriff Robin Skiles gave the welcoming speech at the half-hour event, which was followed by a presentation of colors by the Tulare County Sheriff’s Honor Guard. Cpl. William Seymour led the Pledge of Allegiance and the Sheriff’s Chaplain Corps gave the invocation.

The highlight of the event revolved mostly around paying tribute to those who lost their lives serving Tulare County, the most recent event taking place early in 2016.

In February of 2016, Boudreaux said the Sheriff’s Office was devastated by the crash of the department’s light sport aircraft Sheriff One and the loss of Sheriff’s Pilot James Chavez and Tactical Flight Officer Scott Ballantyne. But with resolve, Boudreaux said the Sheriff’s Office has become stronger and even more committed to the service and protection of the citizens of Tulare County through aerial support.

“The population of Tulare County has grown big enough that it demands the need for aerial support for law enforcement and to increase the safety of our communities,” Boudreaux said.

Through Boudreaux’s leadership and vision, the Sheriff’s Office has two new airplanes to keep a watchful eye over Tulare County. They are a Cessna 182, which seats four, and a Cessna 206, which seats six.

These aircraft, Boudreaux said, are currently in the process of being outfitted with state-of-the-art law enforcement avionics.

The Cessna 182 will be the TCSO’s patrol-based plane and the Sheriff’s eyes in the sky, assisting deputies and other law enforcement agencies on the ground using high-tech surveillance equipment and cameras. Boudreaux said statistics indicate that when patrol aircraft is on duty, property crime and theft decrease while criminal apprehensions increase. These aircraft, he said, also provide superior officer safety for deputies and officers on the ground.

Boudreaux said the Sheriff’s Cessna 182 is named “Wren” in honor of Deputy John “Nick” Wren, who was the first Tulare County Sheriff’s Deputy killed in the line of duty on July 5, 1889. He was 40.

The Cessna 206 will be TCSO’s utility-based plane, taking an important role in supplementing search and rescue missions, clandestine marijuana detection operations throughout the county, inmate transportation and high-profile investigations.

The Sheriff’s Cessna 206 is named “Tribute” in honor and in tribute to the fallen, including Ballantyne and Chavez.

Boudreaux said the insurance money from the plane crash and operational budget savings has allowed for the purchase of the aircraft.

“What you see sitting before you is $1.2 million worth of aircraft, and zero cost for taxpayers,” Boudreaux said at the event.

Both planes, Boudreaux said, provide a strengthened aviation platform and complement the success of the Sheriff’s Unmanned Aerial Vehicle (UAV) drone program. With all he’s done so far in terms of implementing aviation tools to keep residents safe, it would be an understatement to say Boudreaux is on the cutting edge of law enforcement UAV programs.

Boudreaux is the first in the state to assign UAV’s at the patrol level. The Sheriff’s Office now has a UAV and Deputy Operator assigned to every substation in the county. Just like a K9 and handler, Boudreaux said this allows for the immediate response of a UAV when needed by the Sheriff’s Office or other local agencies anywhere in Tulare County.

Boudreaux said there are a total of eight drones and seven drone operators in the Sheriff’s UAV Unit, including five for patrol, one for detectives and one for detentions, with an additional drone dedicated for training. Heading up the UAV Program is Seymour, whom Boudreaux chose to be the first full-time operator a year ago.

“Cpl. Seymour is sought after by other agencies statewide and beyond for his expertise,” Boudreaux said. “Next month, he will speak at the Drone World Expo in San Jose.”

The drones, Boudreaux said, were paid for with funds from the High Intensity Drug Trafficking Areas (HIDTA) program and through operational budget savings.

Boudreaux said drones save money in time and resources. When used in a search and rescue mission, or if a child is missing, Boudreaux said Seymour can clear an area in minutes with his drone, while it could take hours and numerous officers without the drone.

He noted that it’s also safer to use a drone to monitor an armed barricaded suspect instead of putting deputies, or the subject, at risk for their lives.

At the Sheriff’s Office, Boudreaux said drone usage is mission specific for finding lost children and at-risk adults, search and rescue operations as well as SWAT details, and crime scene photography. The UAV unit, he said, was developed to supplement patrol and is not used for surveillance.

“Whether patrolling high in the skies with our aircraft or responding to emergency incidents with our UAV Units, the Sheriff’s Office is making a difference in securing the safety and improving the quality of life for everyone in Tulare County,” Boudreaux said.

Tulare County Board of Supervisor Mike Ennis said it was a great day not only for Tulare County, but for its sheriff’s department and county residents.

Porterville Police Chief Eric Kroutil said Boudreaux and his staff could have easily eliminated the county’s aviation program after the terrible loss last year, but instead asked how to make it better.

“And today you are seeing the answer to that question,” Kroutil said. “With the purchase and deployment of two aircraft to serve the communities of Tulare County, our communities and the law enforcement personnel who serve them will not only be safer, but more can be accomplished with less ground resources.”

He continued, “Both of these goals are critical in today’s environment, and with these aircraft, the ability to achieve these goals is improved with every agency in the county.”