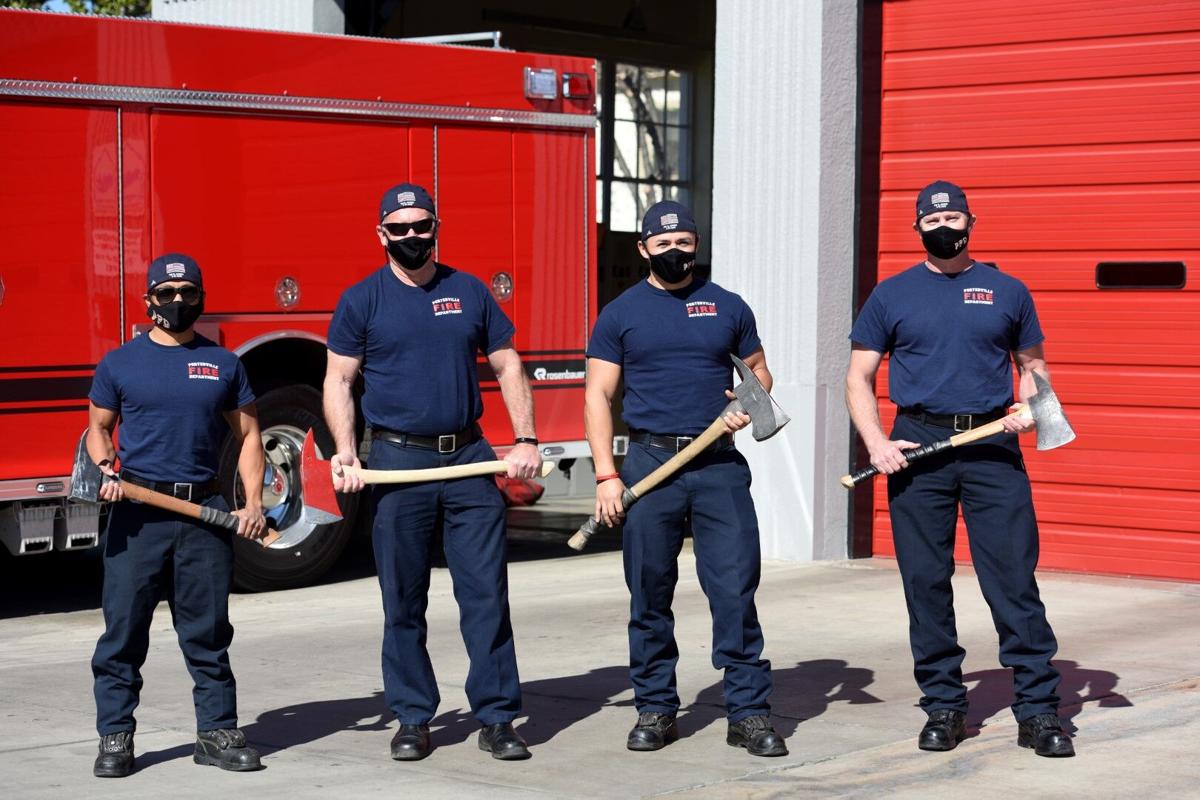 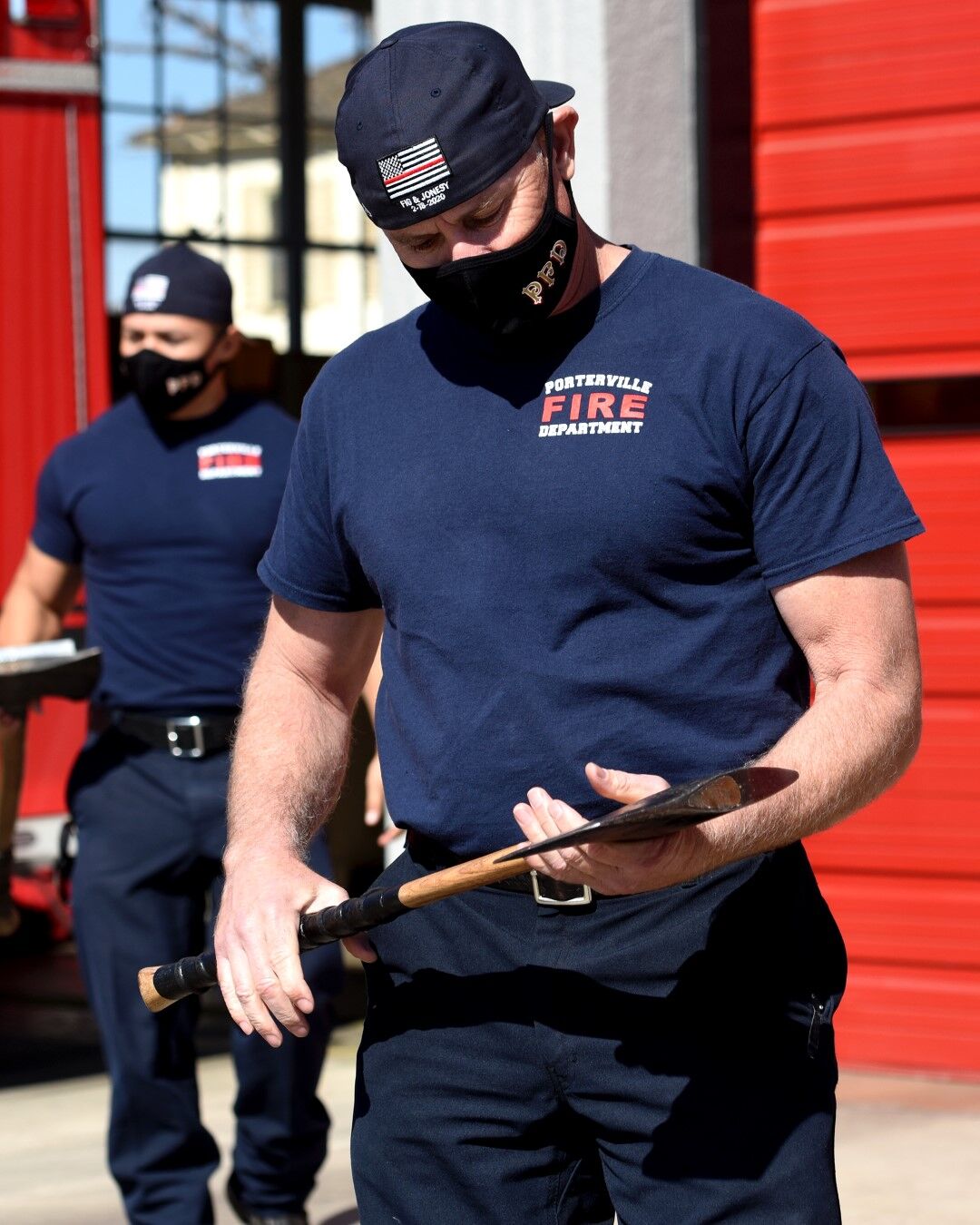 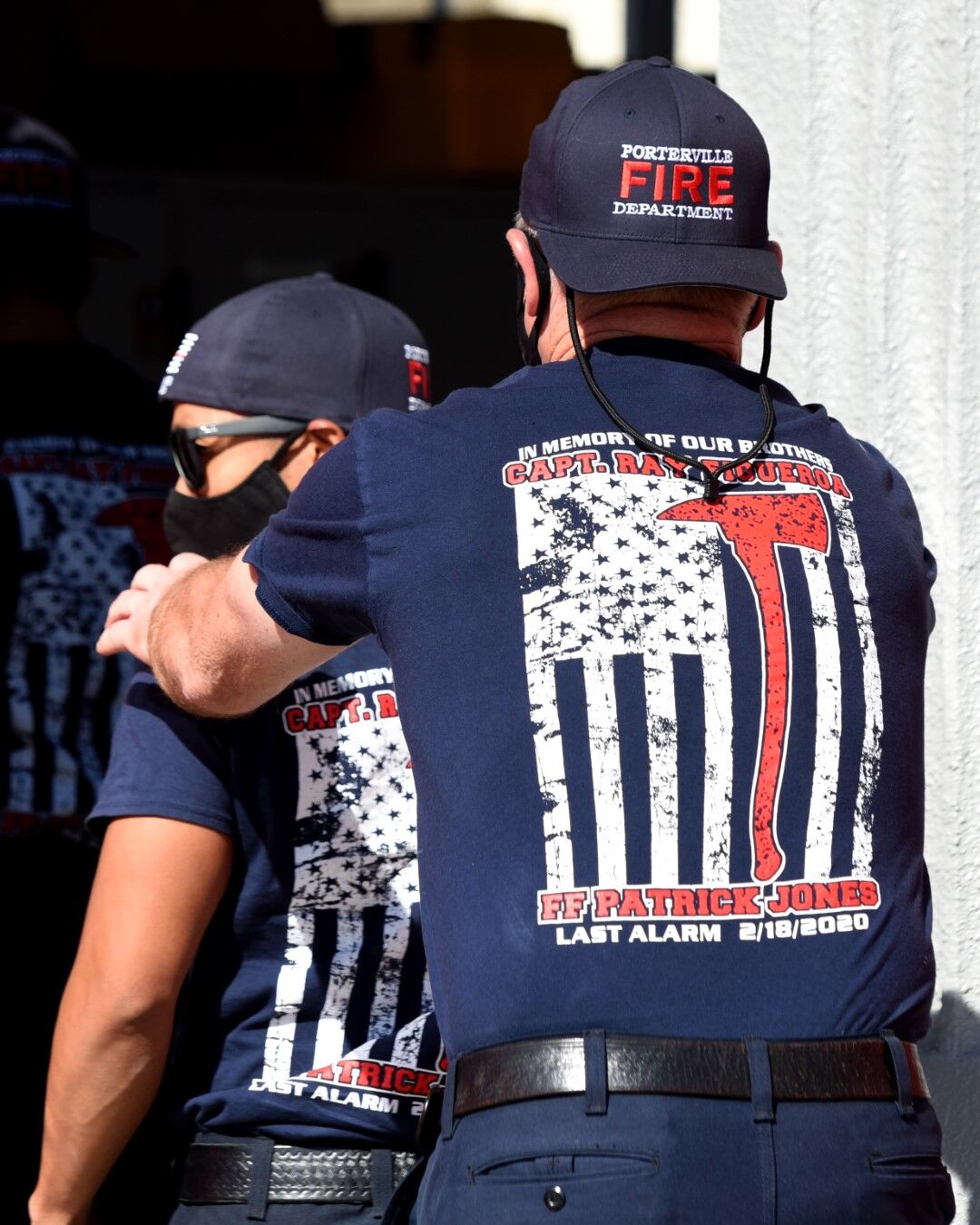 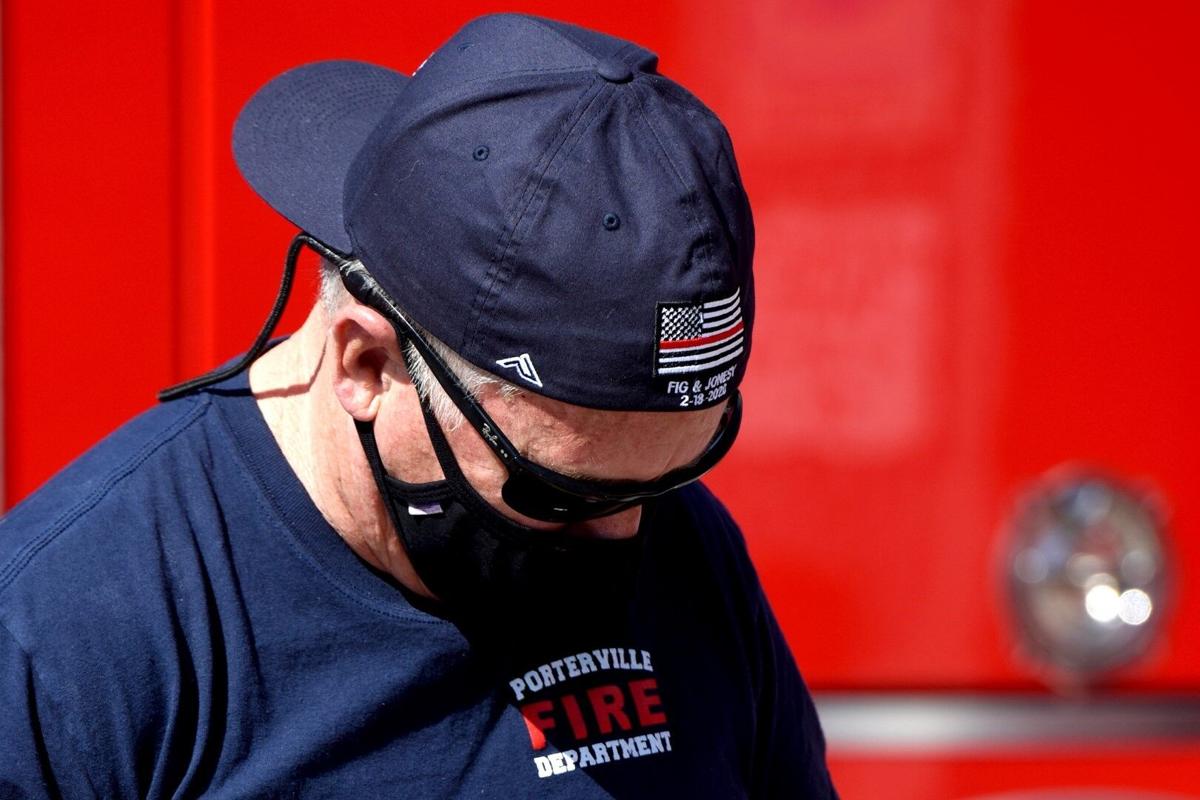 Porterville firefighter, Jeff Dodd, looks down at his axe, Thursday, Feb. 18, 2021, at Porterville Fire Station 71. Dodd and other firefighters wore their hats backward, like firefighter Patrick Jones liked to do, and each hat commemorated Jones and Capt. Ramon Figueroa.

Porterville firefighter, Jeff Dodd, looks down at his axe, Thursday, Feb. 18, 2021, at Porterville Fire Station 71. Dodd and other firefighters wore their hats backward, like firefighter Patrick Jones liked to do, and each hat commemorated Jones and Capt. Ramon Figueroa.

The fire destroyed the Porterville Library on February 18, 2020.

Opening with footage of PFD personnel fighting the tragic blaze of the Porterville Public Library fire on February 18, 2020, the video packed an emotional punch that never let up.

Steve Walker, PFD Chaplain, began a prayer as the footage of the fire faded out. As he prayed for the remembrance of the two fallen heroes, the video cut to clips of photographs of Jones and Figueroa. After the prayer was over, the PFD Honor Guard presented their colors and fire axes, before the camera zoomed into the PFD insignia and broke to Porterville Fire Chief Dave Lapere, who spoke with raw emotion in his voice.

“On February 18, 2020, at approximately 4 p.m., Engine 71 was dispatched to the Porterville Library which was engulfed in flames,” said LaPere. “Shortly after arrival and upon hearing a patron was still inside, Fire Captain Ramon Figueroa and Firefighter Patrick Jones showed the world their commitment

to saving lives. Devastatingly, they lost their own lives in an attempt to save another.

“Although the global pandemic has captured much of our attention over these past few months, it hasn’t distracted the members of this department from thinking of their fallen brothers. Personally, I can tell you every single day they are on my mind. I have been in the fire service for over 30 years and the library incident showed me something that I had never seen before.

“I’d seen bravery, nearly every call requires some sort of bravery, but the bravery exhibited even by one of the youngest members of the department was humbling. Patrick’s bravery to trust his captain is admired. And Ray’s bravery to urgently respond to a potential victim is true to his nature.

“I’ve seen fraternity, most fire departments pledge a closeness of brothers and sisters and it is often acknowledged with awards ceremonies or annual public safety honoree events. I was and still proud of the multiple crews of firefighters who risked their own lives responding to that May Day on that day. In all, 12 firefighters from Porterville Fire, Tulare County Fire and CAL Fire attempted rescue on that day. These men and women nearly gave their lives to save the lives of their brothers.

“I have seen community support and I know we’ll see it again when the pandemic is over and we are able to have parades, Freedom Fest and events that bring us all closer together. What I have never seen before was the complete and overwhelming support for Porterville and the surrounding areas. The signs and the banners in people’s front yards, the generosity of providing food and coffee for two days while we worked the fire scene, the kindness shown in bringing food to the stations over the following few weeks. We were even further blessed by some of the neighboring fire departments covering our stations while our crews had time to mourn and setup for the memorial.

“We are still hurting and still in mourning. I mentioned during the memorial service that old saying that grief comes in waves. Those waves are still brutual today, but I know Ray and Patrick would want us to stay strong and push through. These men came to work every day with enthusiasm and energy for their chosen profession, and every day they worked hard, they trained hard to be their best. I remember them, we all remember them and we cherish our memories of them. We are never going to forget them and we are adapting to a different path without them.

“Porterville Fire Department has two newly adopted traditions in honor of Ray’s affinity for axes. On February 18 of each year, it will be a day to maintain and repair all axes within the department whether they need it or not in honor of Ray. In honor of Patrick’s enduring way of skirting proper uniform policy, on February 18 of each year, all personnel in Class B uniform will be allowed to wear their ball caps backwards as he liked to. Today these new traditions are being honored in our department. Today, tomorrow and forever, Captain Ray Figueroa and Patrick Jones are valued members of the Porterville Fire Department.”

“Chief, my son Ramon Figueroa, also known as Captain Ray Figueroa, dedicated himself to his career,” said Figueroa. “He strongly believed in training for himself, his subordinates and fellow firefighters. Training was a passion as he went on to say, ‘I am far from knowing it all, but I am driven to learn it all.’ He believed in providing the City of Porterville the highest professional services. As you know, Chief, because of his degree of training and his fire state marshal qualifications, he was always being recruited to the surrounding fire families and fire agencies. He loved his firefighter brothers and sisters. They were his priority. As Captain Ray would say, ‘The men, the mission and then me.’ I present these two shields in honor and remembrance of our two Porterville heroes, Captain Ray Figueroa and Firefighter Patrick Jones. I will close with what Ray carried in his heart, ‘Live to leave legacy, die to fulfill destiny.’”

LaPere graciously accepted the two shields and said that they will be placed in PFD’S training facility. The video then faded out to footage of Jone’s casket draped with an American flag as it was wheeled into a vehicle.

Soon, photos of Firefighter Jones popped onto the screen, followed by a voiceover from the Jones family thanking the community for rallying together in support during those fateful days.

“The Jones Family would like to thank the gracious community of Porterville for the warmth you brought on our hearts when our hearts were abruptly shattered in the tragedy of the losing Patrick,” said the Jones family. “With absolute unbelief we had arrived in our misery to receive Firefighter Patrick Jones’ body that smoky morning. Porterville, you held us in your hearts and we felt your prayers surrounding our family. Your amazing talents that we received as you showed your honor for Patrick, the hugs, the outreach of love. God had placed his hands on the City of Porterville, and it was showing. We will never forget any of you, nor will we forget the way you touched our hearts forever. Thank you wholeheartedly.”

The video cut away to footage of Captain Figueroa’s funeral with two voiceovers about who he was as a person, father, brother, son, man and firefighter, and gratitude for all the support the Figueroa family received from the community.

Mayor Monte Reyes was next to speak, and stated that the memories of Porterville’s fallen heroes will never be forgotten. “February 18, 2020, will be noted as one the most painful days in the history of Porterville,” said Reyes. “A fire that destroyed the Porterville Library also claimed the lives of two local heroes. Remarkable courage compelled Captain Figueroa and Firefighter Jones to take swift action with the possibility that a library patron was trapped in the building. They gave their lives to protect the innocent. The community entered into a sorrowful period and continues to recover. Although a full recovery may never be achieved, we continue to lend our hearts, thoughts and prayers to all who were affected by this terrible tragedy. The community was lost in grief that fateful day. Our memory of Captain Figueroa and Firefighter Jones will never fade. It was as clear then as it is now, remembering them, honoring them, and fearlessly feeling every emotion is essential for our community to heal. The scale of loss is too great for any one person to bear alone. That’s why then and now we grieve together, we remember them together, and together we salute the memory of Captain Figueroa and Firefighter Jones, heroes now and always in the hearts of the residents of Porterville, and wherever their story is told.”

As the memorial video began to come to a close, footage was shown of the Honor Guard at the memorial wall at Fallen Heroes Park as they placed plaques bearing the names of Figueroa and Jones onto the wall. The President of California State Firefighter Association (CSFA) and the President of the CSFA Historical Society announced that they were presenting Jones and Figueroa with purple hearts for their heroic actions during the library fire.

The video ended with a bell ringing ceremony which symbolized the last alarm for Figueroa and Jones. The memorial video faded out as bagpipes and drums played Amazing Grace and a PFD fire engine drove away.

The memorial video was produced by the Academy of Digital Design and Innovation at Summit Charter Collegiate Academy and is available to view on Youtube at youtu.be/Ajx5WEMH1L8.