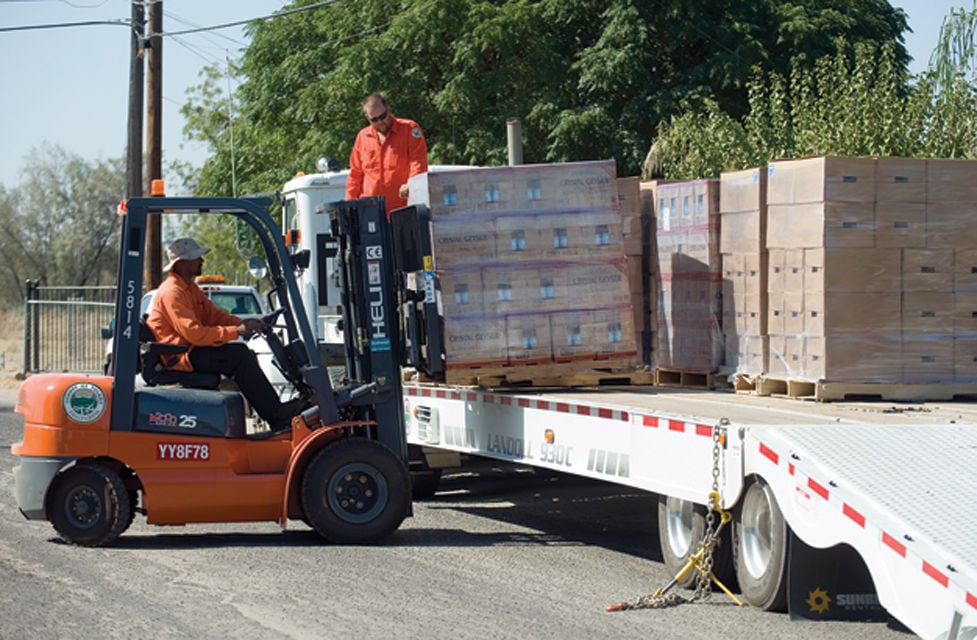 Cases of water are delivered to houses in East Porterville Friday, Aug. 22, 2014. 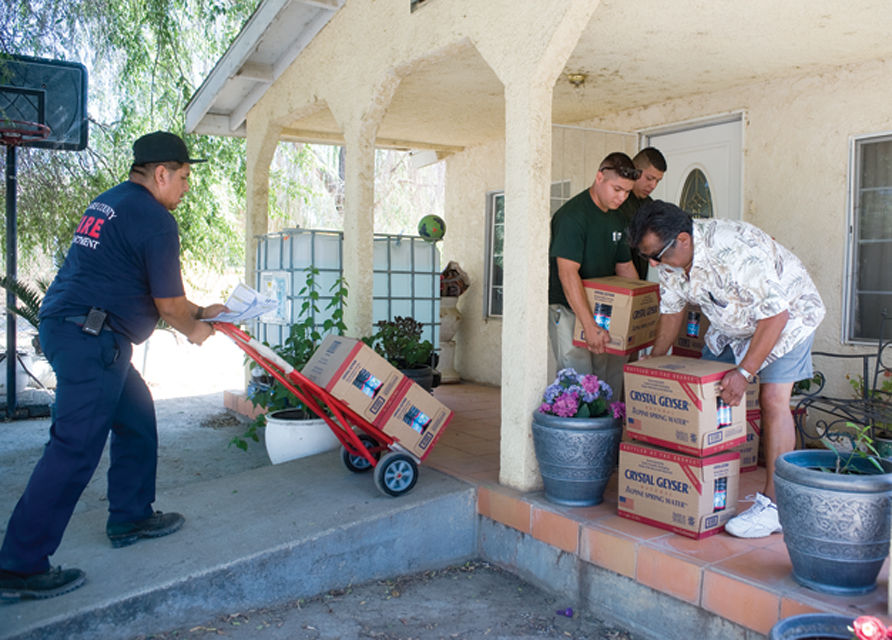 Cases of water are delivered to houses in East Porterville Friday, Aug. 22, 2014.

The streets of East Porterville were busy Friday as trucks, cars, flatbeds and Red Cross disaster relief trucks traversed the area delivering bottled drinking water to residents of East Porterville without water. Plenty of activity was going on at the Doyle Colony Fire Station which was set up as a command and organizing center for the deliveries.

East Porterville was divided into five sections, identified by letters A through E, and volunteer groups were assigned to each division to deliver the water to the addresses of households that had reported being without water. The addresses from the list were a combination of the county’s list from residents that had called in; the list provided by the City of Porterville; a list from Donna Johnson, who first started the volunteer effort to supply drinking water; and from the survey conducted Saturday.

“There are about 1,400 homes in the area,” Office of Emergency Services (OES) Manager Andrew Lockman said. There were 182 homes that had reported not having water or were having some kind of water issue. “We only have population data for 65 of them. Of those there were 386 people [in the households].”

Volunteers had to be sworn in as disaster service workers before they could participate.

Rebecca and Michael Bates, who live on East River Street, were in the area designated as Division A. Although their well has not completely run out of water, Rebecca said they were experiencing water-pressure problems.

“We’re worried about running out of water,” she said. “A neighbor 20-feet from us ran out.”

“We’re trying to conserve water. We don’t know how long it will last,” Michael Bates said.

Jesus Alfaro lives on Park Street in Division A, and his water well still works. Although offered bottled water, Alfaro said he didn’t take any.

“I don’t think it’s fair to those who don’t have water,” he said. “I’m glad the county and city are doing this, especially for those with shallow wells. It’s a good thing somebody is doing something, at least giving us hope that something will be done in the future.”

Alfaro said his well is 120-feet deep and the pump is currently set down at 40 feet. “I’m giving water to about 20 houses right now,” he said. “I could not leave them without water. They’re humans.”

Volunteer Edwin Gomez said the people he encountered were surprised and happy with the water delivery. “They didn’t know it was specifically today. They weren’t anticipating it, but they were happy.”

Refugio Salas, a volunteer from FHCN, said one of the residents said their family had been out of water for about a week and had to go buy their own.

Although volunteers were targeting a list of locations where people were without water, that didn’t mean they weren’t there to help those who were not on the list.

“If we’re out there and someone says, ‘Hey, we don’t have water,’ then we will give them two cases per person, per household,” said Tulare County Fire Chief Joe Garcia.

Besides delivering the bottled water, volunteers were also providing residents with grant applications to receive future, ongoing water deliveries from a delivery service. Friday’s distribution was an immediate, emergency relief effort to provide enough water to last residents about three weeks; however, residents will need to sign up for and qualify for the grant program to continue to receive bottled water.

“There are going to be people who don’t income qualify for the grant program,” warned Lockman, adding it was hoped organizations and individuals would continue to aid those in need of water, especially if they don’t qualify for the grant. “The county is hoping to partner with local groups to give them water to continue the effort. We hope to have some water left over and get some small water donations and we’re hoping to deliver them to groups or individuals to distribute.”

Engineer Grant Jackson from the county fire department was working in Division A and said his division served about a third of the homes on the list. “We’ve probably actively identified 15 more” households without water that were not on the list,” he said. Division A is basically the area of Plano Street along the river, as well as Leggett Street and Date Avenue. “This is what it’s about,” he added. “Serving our community. This is why I became a medic.”