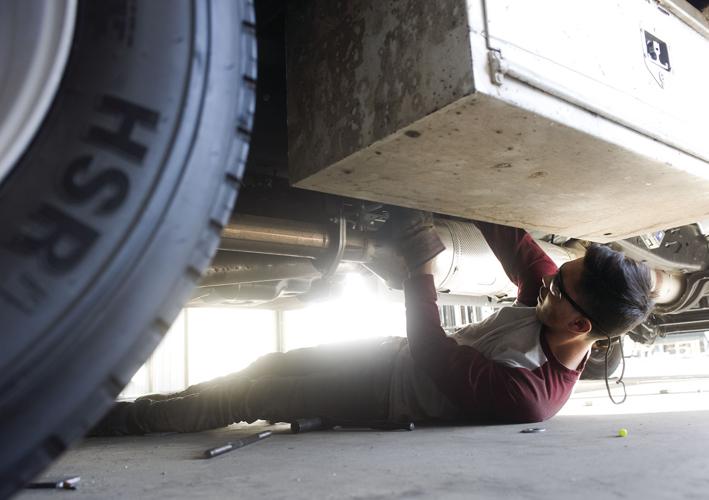 Eduardo Lemus, 17, works underneath a truck Thursday at Doug De Leo Welding in Lindsay. Students at John J. Cairns High School get hands-on experience through its own internship program. 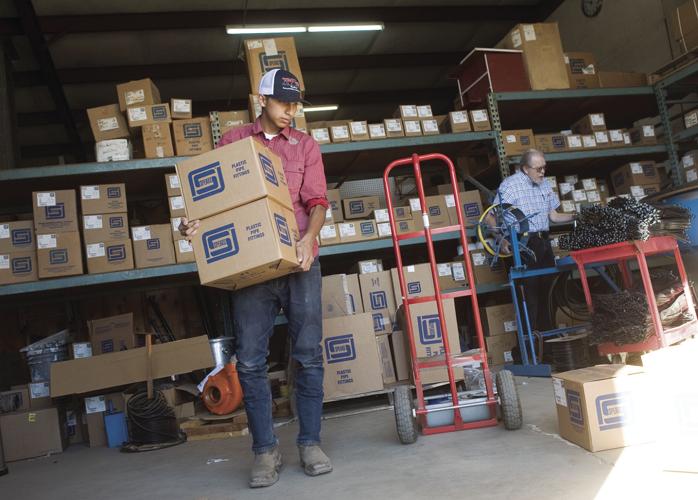 Eduardo Lemus, 17, works underneath a truck Thursday at Doug De Leo Welding in Lindsay. Students at John J. Cairns High School get hands-on experience through its own internship program.

When learners at John J. Cairns High School in Lindsay were asked what they would change about their school, Principal Dennis Doane said they all wanted more hands-on experience.

Doane said he wants to give the learners — who he said are the most disconnected from school in the district — a reason to want to go to school and learn and be prepared for life after graduation. So the school decided to start an internship program.

Doane said all the students picked areas they were interested in, and the school’s internship coordinator, Erik Gonzales, went out into the community and found businesses willing to take on an intern.

Before the internships began, Doane said the learners were taught soft skills, like how to create a resume, set up an interview, talk professionally and dress appropriately.

Except for about 15 learners, most of the 10–12 grade learners at John J. Cairns have been placed in internships, Doane said. He said students go to school Mondays, Wednesdays and Fridays, and go to the full-time internships Tuesdays and Thursdays.

The internships are a semester long, and if learners decide the type of internship they are in isn’t for them, Doane said they can switch to a different internship.

The internships are in all different types of businesses, Gonzales said. However, he said some of the students want to do internships in places that aren’t available in Lindsay, so he’s looking to find some businesses in nearby areas, like Porterville and Exeter.

Lindsay School District is the largest employer in the city, Doane said, so it’s only fitting that a lot of the students get internships with the district. He said there are interns in areas like the office, food services, the technology department and grounds maintenance.

Students like Elias Ortiz and Xai Castro were hard at work Thursday morning preparing school meals for the day alongside the kitchen staff, and intern Fernanda Flemate was at the front office greeting people who walked in the door.

Flemate said her internship is going well and she likes the experience. She said she answers phones, files and is the first impression when people show up at the office.

“When everyone comes in, they act like as if I was the one who runs the office,” Flemate said. “I like it, and when there’s nothing for me to do, I can do my homework.”

Flemate’s mentor is the office manager, Rocio Vasquez. Vasquez said Flemate does a great job at her office duties, has a great attitude and is an independent go-getter.

Vasquez said this program is good for the learners because they can get out of their comfort zones and learn how to be mature and have a job.

“When I first met her, I thought she was a little timid and quiet,” Vasquez said. “Now I see the way she’s flourishing into being able to talk more with people and actually getting out of her shell.”

One of the interns, Moises Sevilla, does his internship at Lloyd Anderson Electrical Inc. in Lindsay.

Sevilla’s mentor, Rick Robles, said when Anderson told him about the internship program, he was in need of an assistant, so the program sounded like a perfect fit.

“So far it’s great,” Robles said. “He’s a great kid. Moises is sharp — believe me, he’s a lot sharper than a lot of people that just come off the street. I really enjoy him, and I’m hoping he enjoys the experience also.”

Sevilla said he already works with his dad in the same way, but now he’s learning a lot about how the business works and what Robles does. He said he really likes working as an intern and sees himself doing something like this in the future.

“Classroom learning was not really something for me — I’m more of a hands-on learner.” Sevilla said. “If I get to come out here and do something else besides sitting in a classroom all day, I enjoy it.”

At AG Irrigation Sales, intern Joevanny Soria said he’s still trying to figure out what he would like to do in the future, but knows he likes working outside.

“I like how it’s not just school,” Soria said. “You also learn the job and how it works.”

Intern Eduardo Lemus works at Doug De Leo Welding. His clothes were covered in dirt as he shimmied on the ground Thursday morning under a truck, helping another worker fix it.

Gonzales said Lemus was hard to rein in during classroom hours, but is now excited and focused during his internship and looks forward to going to work.

De Leo, owner of the company and Lemus’ mentor, said the intern is always positive at work.

“When you give people like this direction, they can really succeed,” De Leo said.

Learning facilitators go out and check on the interns and the businesses report back to the school on how the interns are progressing.

Doane said the mentors are people who can teach learners about life, and many of the businesses participating in the internship program are small businesses in the community that would like to see the next generation thrive.

“Part of the district’s mission and vision is to prepare learners, so that they can pick the future that they desire,” Doane said. “It’s not just a nice idea — it really is what kids need.”

“We really want to see the community mold these kids,” Gonzales said.