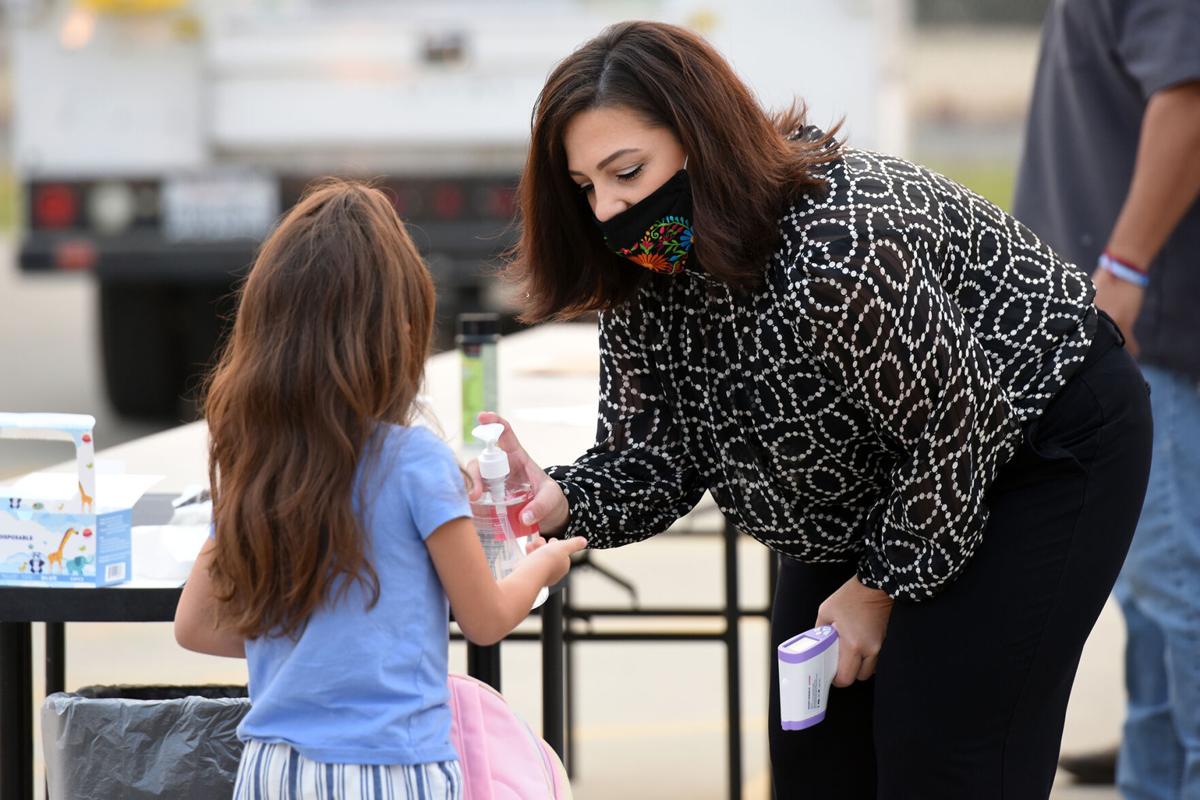 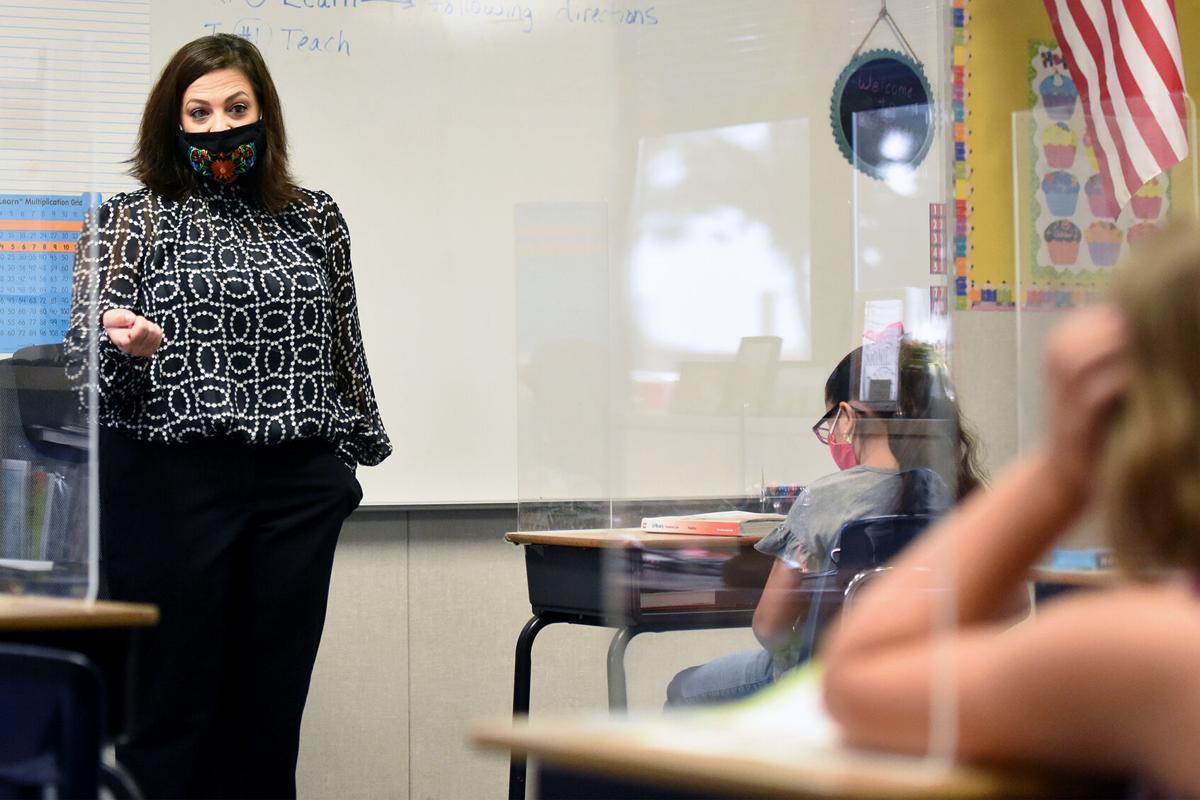 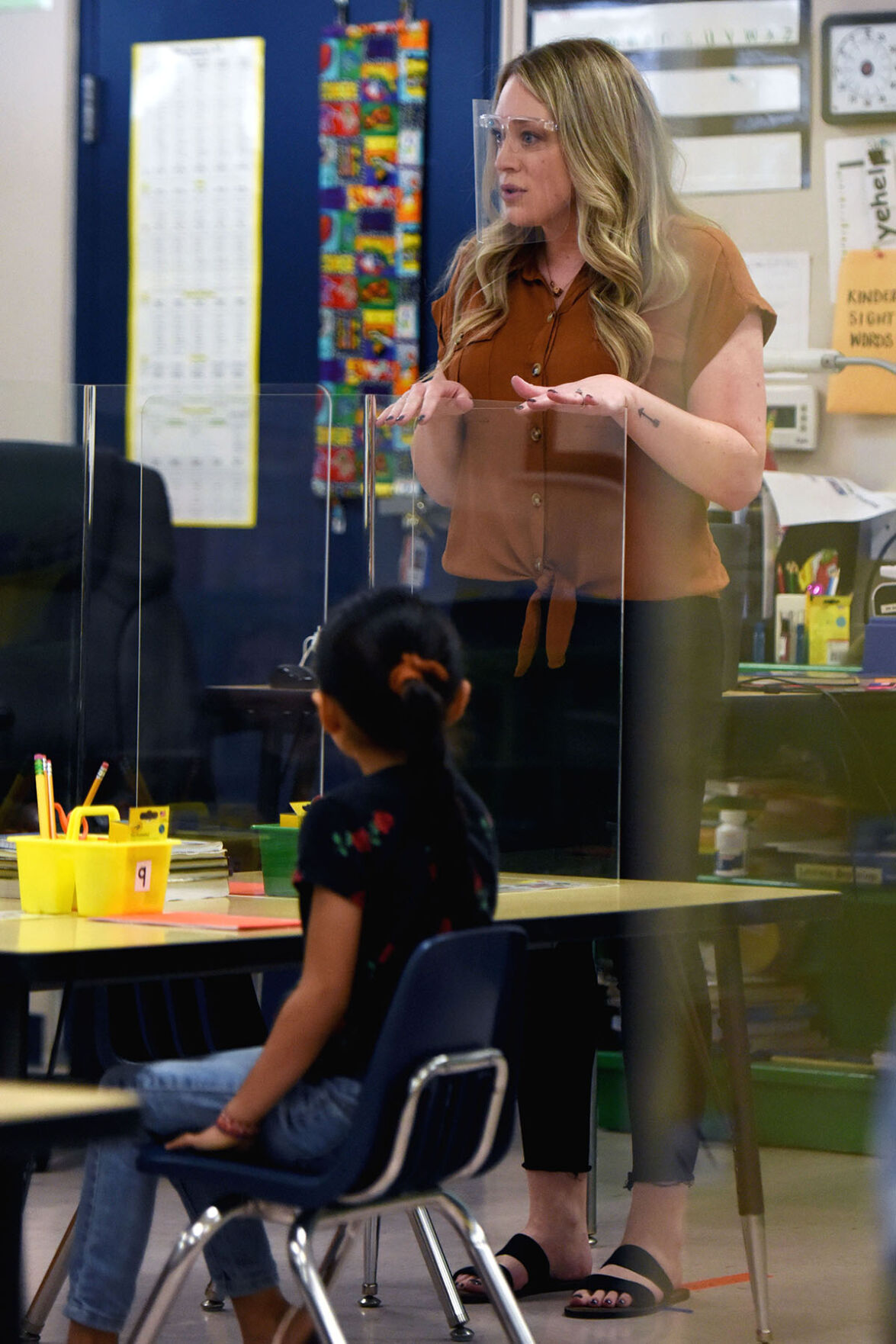 Jennifer Hedrick, talks to her kindergarten class about the new changes to the classroom, Monday, Sept. 28, 2020, at Hope Elementary School. 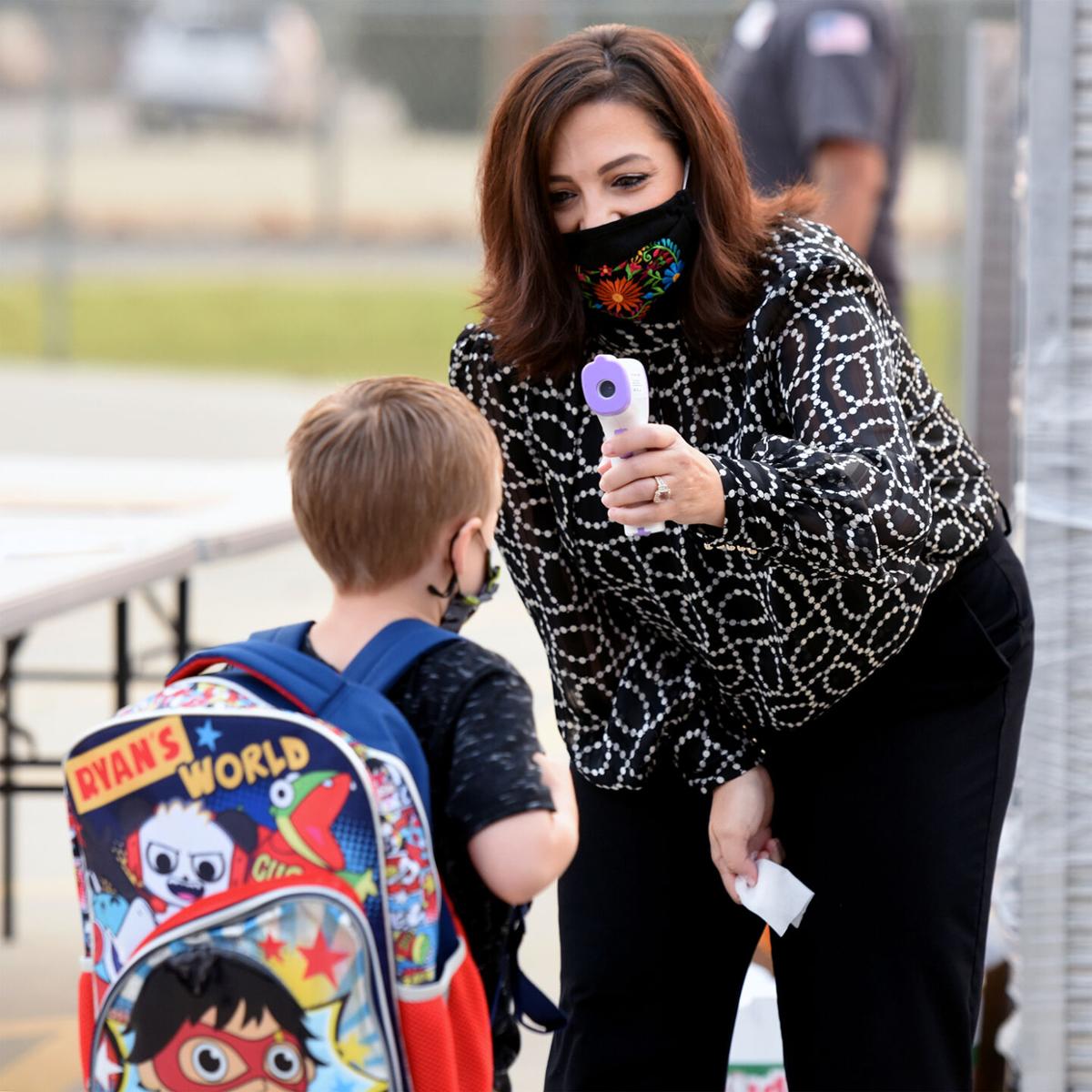 Jennifer Hedrick, talks to her kindergarten class about the new changes to the classroom, Monday, Sept. 28, 2020, at Hope Elementary School.

The dropoff area at Hope Elementary School was abuzz Monday morning with chatter and laughter from students back on campus for the first time in months for in-person learning.

With a smile and a wave, Hope superintendent and principal Melanie Matta, called out “We’re so excited to see you!” to every student as they climbed out of their parents’ and grandparents’ vehicles.

Matta greeted every student by name then bent down to eye level as she helped take temperature checks, ask COVID- 19 screening questions, and distribute hand sanitizer before instructing students on where to go next.

“It’s a family feel here and I think that’s why a lot of people like coming,” Matta said. “The parents know that when they drop their kids off, they’re going to be well taken care of. You see we didn’t have very many parents get out of the car even though they had kindergarteners they were dropping off because we’ve taken that time to build that relationship so they knew that we were going to handle it once they got through the gate.”

With their face coverings and face shields on, students expressed their excitement about their return with their words and by nodding their heads.

“I went to sleep early,” one boy shouted from his vehicle in response to being asked about his return.

Getting students on campus while providing a safe environment for them to learn in isn’t an easy task but Hope Elementary showed being prepared is the most important part of it.

While checking student temperatures, Matta found three that were too high. Following standard protocol, all three were isolated. Social distancing rules also prevented Matta from sitting with the students, and it bothered her not to be able to comfort them.

“I felt like with all this chaos out here in the morning and wanting to greet every child, and then we have this one over here kind of sitting off to the side, I just kept him in the back of the mind. I can’t imagine if he’s scared right now and not knowing what’s going on,’” she said. “So that’s why at one point, I took him to his mom’s car, thinking it would be a mentally safer environment for him until his temperature came down.”

After a few minutes, the three students were rechecked, and their temperatures were found to be low enough to enter. According to state and Tulare County rules, anyone with a 100.4 or above temperature should be sent home.

Matta said high temperatures are something she deals with occasionally with her staff coming in during the hotter part of the day and attributed students’ high temperatures to nerves and clothing. “Because of the excitement, and maybe now a child is wearing a jacket so it’s keeping them warmer than they normally would be,” she said.

Back on Hope’s campus this week is kindergarten through third grade. Next week, fourth graders return. However, a date for when fifth and sixth-grade students return won’t be available until Hope can figure out a few things first.

One hurdle Hope has encountered with bringing older students back is how to handle class changes. Usually students switch classes throughout the day but that won’t be possible because of COVID. Matta said the school is going over all possible options, with one idea being only the teachers switch classrooms.

Another unfortunate hurdle is 19 students want to return for fifth grade, but their socially-distant classroom can only serve 16.

“And that’s the issue that’s tough for us because we don’t want to have to tell any family your kid can’t come to school,” Matta said. “I can’t imagine being told that, as a parent, ‘Hey, we have the K-6 waiver but because we don’t have enough room you can’t come.’”

Holding class outside is an idea but not much of an option with winter approaching and fires making the air unsafe. Instead, Hope is prioritizing which students can return to the classroom.

“Our first priority are our kids that are not connecting at all,” Matta said. “Those are the kids that we are going to bring back first. Then it’s our special education population, our English learner population, and any kids that are just struggling mentally that they just need support to be here. That’s our priority.”

As an educator, Matta said it’s difficult to decide on who can and can’t return, especially knowing how much families want their students to return.

“I hate that we have to make a priority list because we’re an educational agency, we shouldn’t have to turn anybody away,” she said. “But because of COVID and the limitation to our space, we do. …. It keeps me up at night knowing that I cannot serve these kids in the way that I know we need to serve them because of our limitations.”

For the students who were able to return to class on Monday, they returned to a slightly different classroom than they were used to. Every student sat behind a plexiglass desk shield and was socially distanced from their classmates.

In her kindergarten class, Jennifer Hedrick explained the new additions to the classroom and had her students point out anything that looked different or was located in a new place, then explained why that was there too.

Hedrick and all other Hope teachers also told their students they weren’t allowed to share anything, but if they needed something, to raise their hand, and they would get it to them.

“My staff has been amazing,” Matta said. She added since the shutdown, she and the staff were immersed in delivering “the best content that we possibly can online to our kids.”

“We noticed over the course of the next several months and over the course of the summer, we got a lot more enrollment because of what we had done with our distance learning program, she said. “So that was exciting for us to know that the word going around is that we’re still investing in our kids and maintaining the rigorous instruction that we had prior to COVID and the shutdown.”

Hope is in the process of getting large, interactive whiteboards so distance learners can learn alongside their classmates. But for now, the learning will be split with in-person learners getting their synchronous, or face-to-face, lessons in the morning and doing an hour of asynchronous, or independent, online learning and assignments in the afternoon. Distance learners follow a reverse schedule with asynchronous learning in the morning and then go online for synchronous learning in the afternoon.

“You have parents who are now concerned, ‘Now that you’ve gone to a half-day model.’ Is my child getting the education that they were getting (before)?’ And we can solidly say yes because they were getting it off and on throughout the day. Now we’re just packing it into one solid time frame,” Matta said.

Hope is one of 10 Tulare County schools granted a waiver to reopen for transitional kindergarten through sixth grade (TK-6) in-person learning by Tulare County Public Health (TCPH). In the area, St. Anne’s and Terra Bella’s Zion Lutheran and Saucelito Elementary were also approved to reopen. Springville Union Elementary has its waiver currently under review by TCPH.