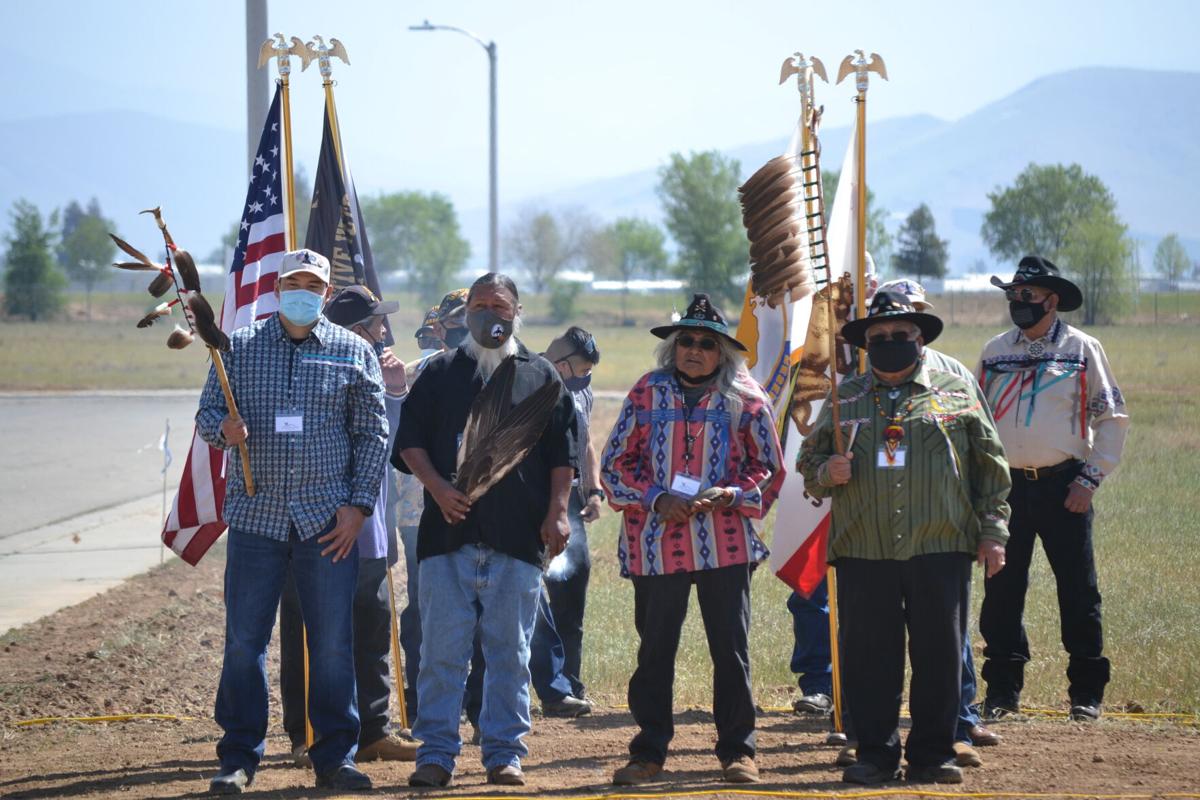 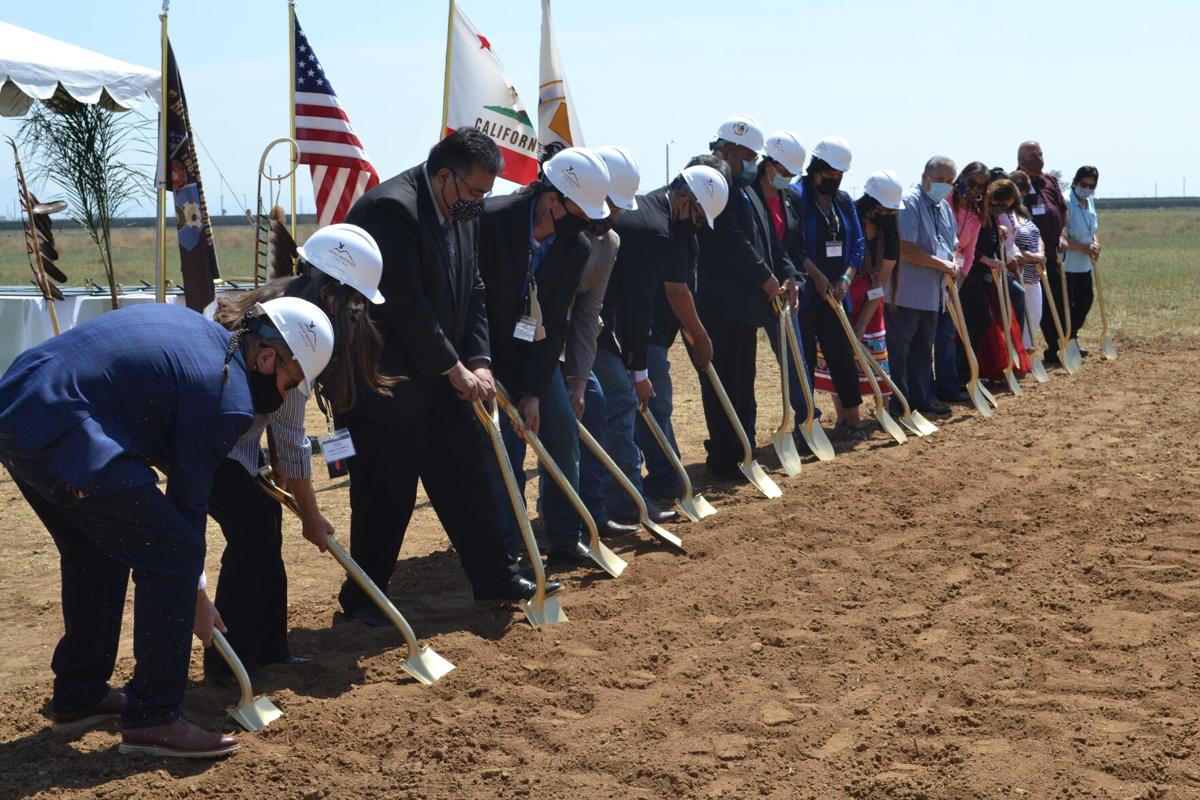 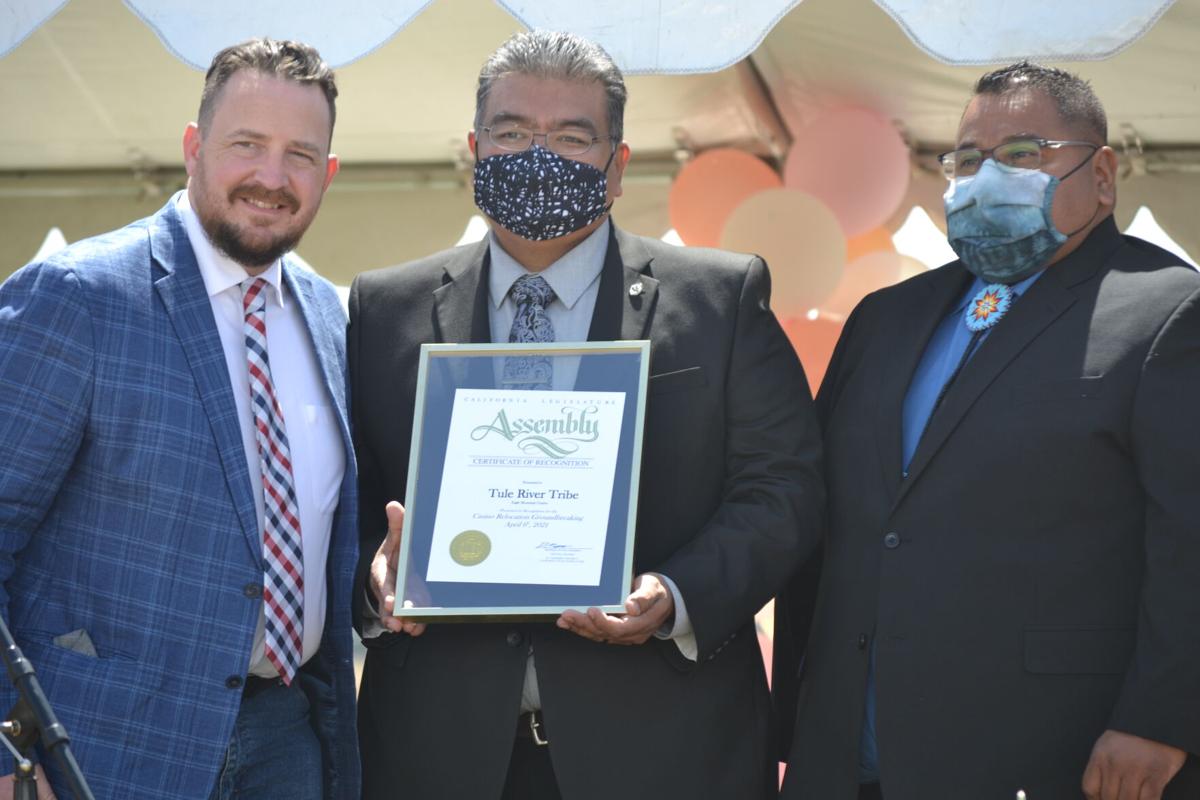 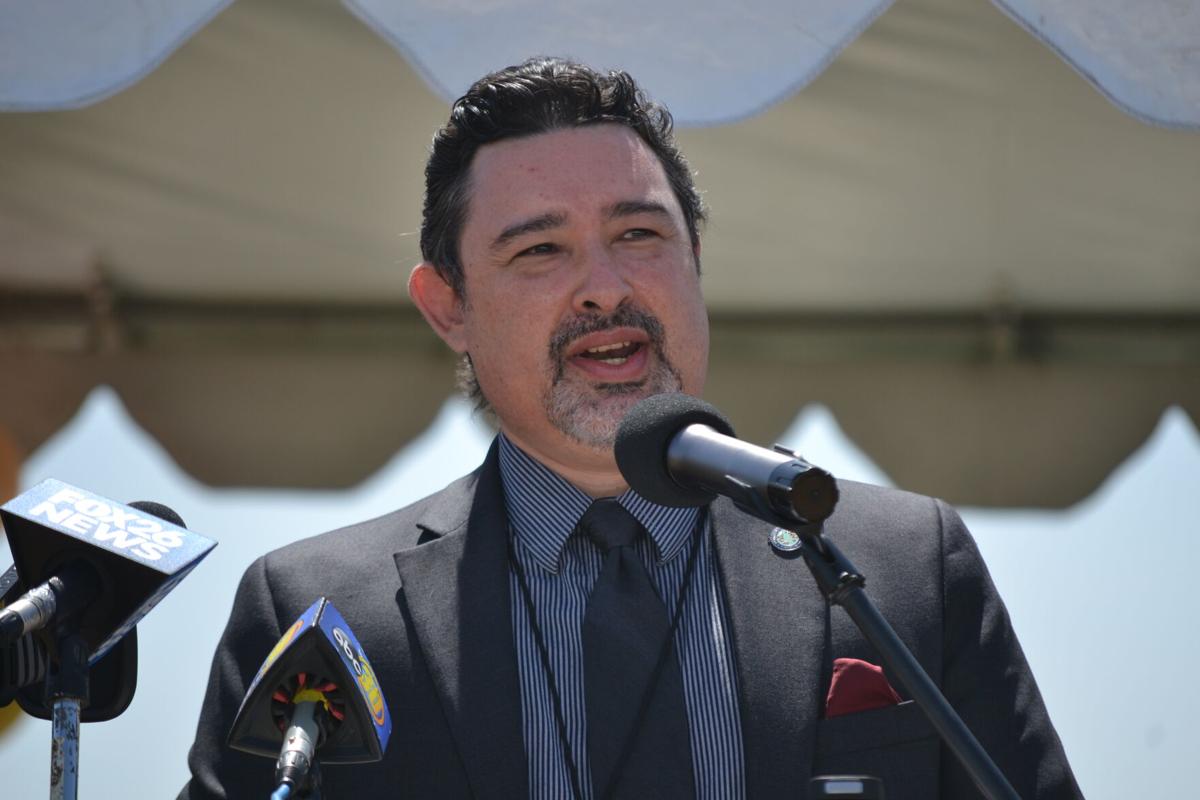 Tuesday was a historical day for the Tule River Indian Tribe and Eagle Mountain Casino (EMC) as they took the biggest step towards relocating to the CIty of Porterville during a groundbreaking ceremony held at their future location off of Scranton. State, county, tribal and local dignitaries gathered at the future EMC location to commemorate the day and congratulate the Tule River Tribe.

The ceremony began shortly before noon, with the presentation of colors by the Tule River Native Veterans Post 1987. As the veterans presented the colors, they sang a traditional Indian song and the audience was welcomed to sing along.

After the colors were posted, tribal elders offered prayer and song at the ceremony. Gratitude was extended to the Elder and Tribal Council representatives and all of those in attendance. A moment of silence was given to honor those who helped to make the ceremony and relocation happen but couldn’t be in attendance.

Matthew Mingrone, EMC’s General Manager, welcomed the audience and explained there were many people who would be speaking during the ceremony. While the list of speakers included states and county representatives, Mingronoe first introduced William Garfield, the Tule RIver Tribal Chairman,

Garfield began by thanking those who helped the tribe get to where they are today.

“This June will mark the 25th anniversary of Eagle Mountain Casino,” said Garfield. “I started back in ‘96 and I’ve seen a lot happen. I’ve seen how the reservation was prior to gaming and I remember opening day. It’s exciting to think about how things have changed since then.”

Garfield talked about some of the earliest memories made at EMC including the first jack pot won and first car given away.

“The people that put that in place for us back then, thank you, because look where we are at today,” said Garfield.

He then recognized the many supporters of the project that were present in the audience and spoke about some of the changes that were made on the reservation because of the casino and the opportunities it brought to the tribe. He closed by extending gratitude to all of the people who worked extra hard to make the casino a success and the relocation a reality.

“When we put those shovels in the ground, my heart goes out thanking all of you who put in the long hours, those of you who walked the halls in D.C., the ones who walked the halls in the state capital, those that moved machines all night long in the old days, those who worked double shifts because the casino was so busy you didn’t want to leave your teammates hanging,” said Garfield. “ We have all worked side by side to make this possible and I thank you. On behalf of the tribe, tribal members, descendants, everybody who is going to benefit, I thank you all who have supported us all along the way, and here we are today.”

Garfield then introduced Tule RIver Tribal Vice-Chairman Neil Peyron, who took the microphone and spoke about tribal councils of the past who have built up to this moment for decades.

“We are a product of you, and we are grateful for you, all of our leaders and our elders that are out there,” said Peyron. “Everything you sacrificed for us, everything you went without so we could have a better chance moving forward, that’s what we are doing here today. We are taking a very large step forward.”

Peyron briefly touched on how the casino will be beneficial for generations to come, and some of the impacts COVID has made on the reservation.

“Today marks a promise that was made a long time ago to continue to provide the best I can for our people,” said Peyron.

“This is a momentous day,” said Assemblyman Mathis. “I consider Tule family and our community does too. That is what is beautiful about this relationship. This is not just a win for the tribe. Having this casino here is a win for the community and our future generations. It is an opportunity, it's an investment. It is really neat to see us rise to these points together and see our community grow in a good, positive way.”

Mathis presented a Certificate of Recognition to Peyron and Garfield. While Boudreaux was speaking, he presented a plaque to Peyron on behalf of the Tulare County Board of Supervisors. As the guest speaker list was near its end, Porterville Mayor Monte Reyes was invited to the front to speak on behalf of the city.

“I’d like to congratulate the Tule RIver Tribe on breaking ground on this long awaited project,” said Reyes. “This groundbreaking signifies another major step forward, if not the biggest step forward, in the relocation of Eagle Mountain Casino. As shovels start to turn the dirt, it is important to think about the partnerships and relationships that have been built along the way, and all those who have worked tirelessly on this project because of what it means to the tribe and what it meant to the surrounding area. As the finish line approaches, new challenges may arrive but I’m confident that your well seasoned team will keep things focused because one day not too far off, you’ll come hear and see the dream becoming a reality right before your eyes.”

To close the ceremony, Tribal Council and dignitaries, local leaders and government representatives were given gold shovels to turn the dirt signifying the beginning of the casino’s relocation into the City of Porterville. The casino is estimated to take 18 months to complete.