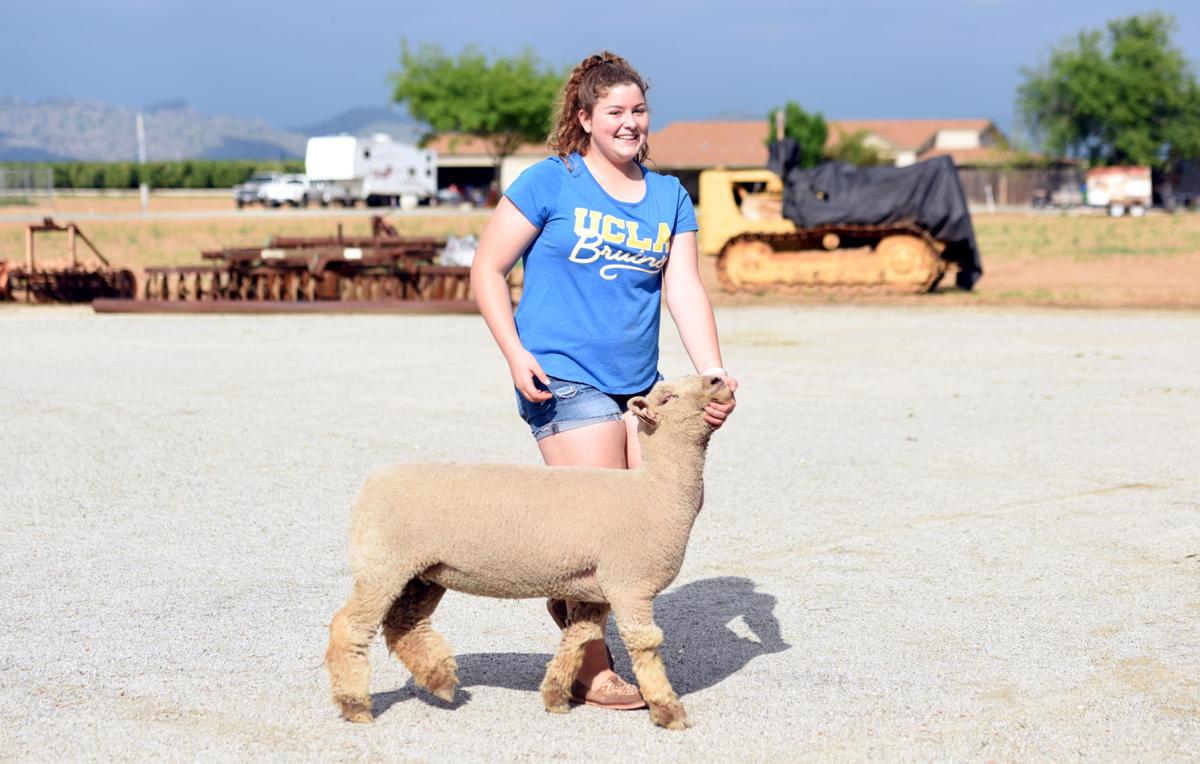 Trinity Avila works with her lamb, Gwen, on showmanship, Tuesday, April 21, 2020, at the Avilas' property. Trinity is a member of Vandalia 4-H. 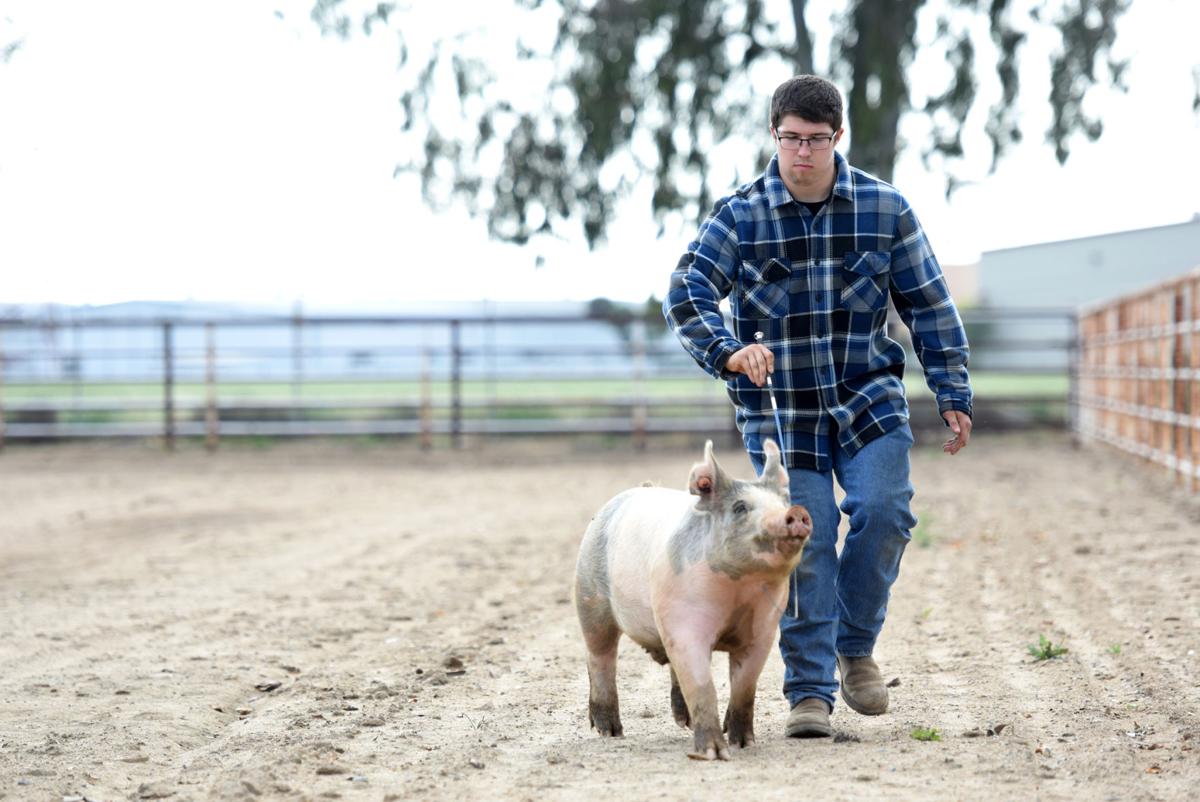 Tyler Avila works with his hog on showmanship, Tuesday, April 21, 2020, at the Avilas' property. Tyler is a member of Porterville FFA. 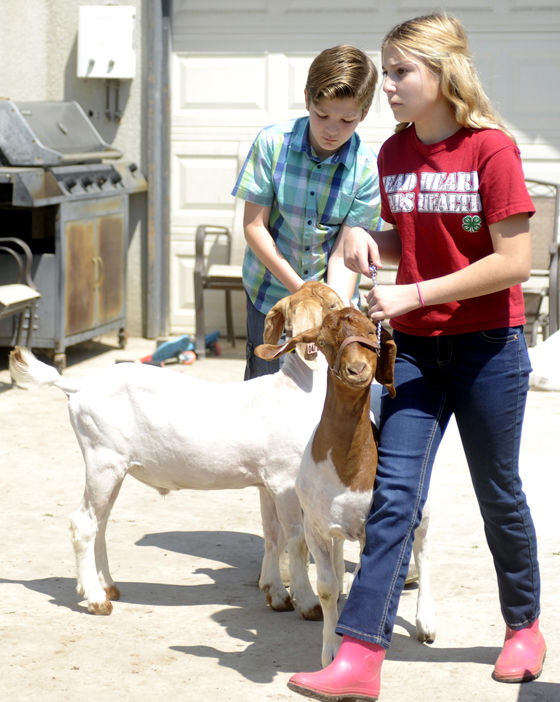 Isabelle Miller, right, and her goat, Bubbles (473) and Elijah Miller, back, and his goat Harry Truman (472) finish checking weight, Wednesday, April 22, 2020, at the Millers' property. 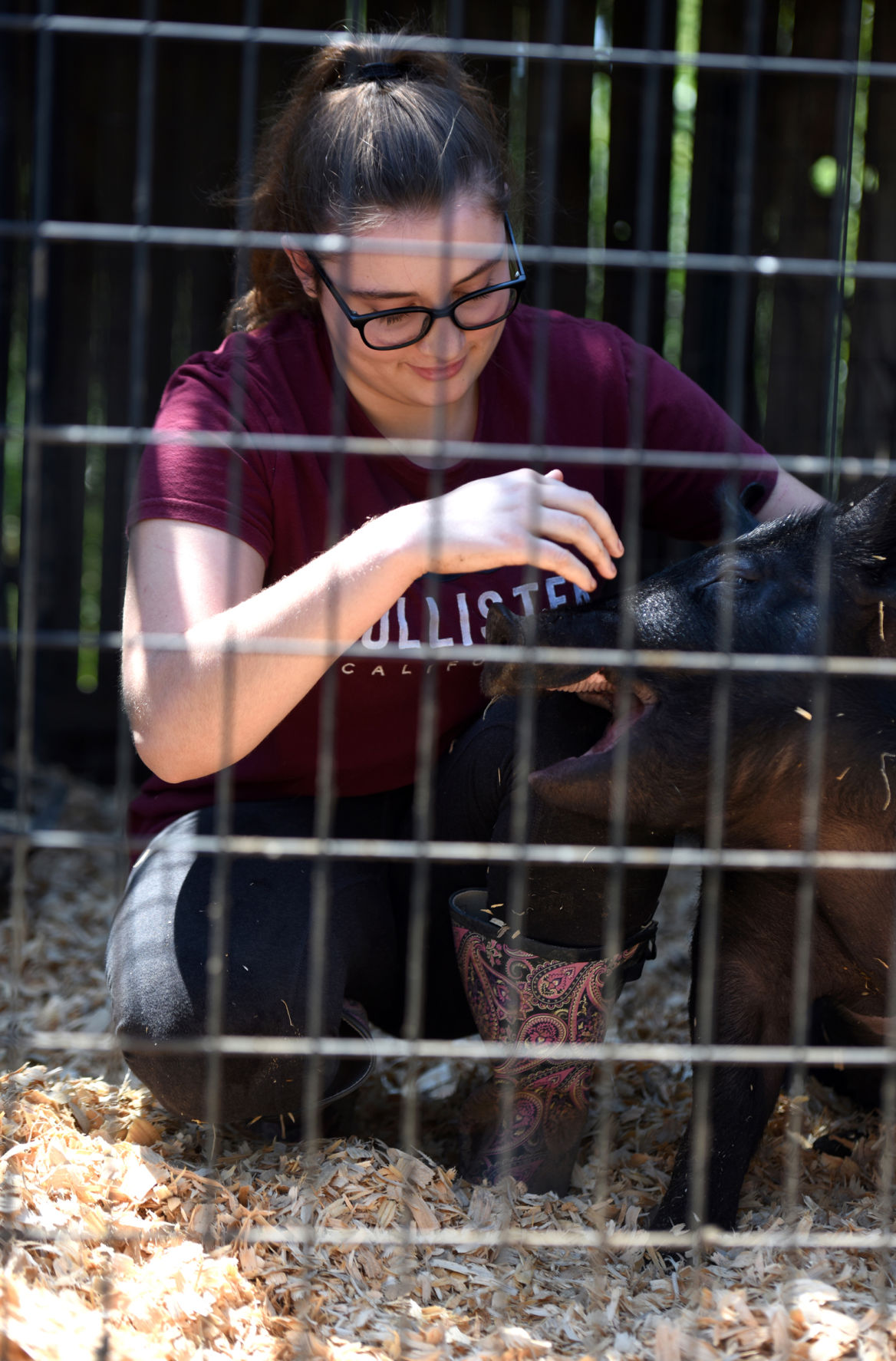 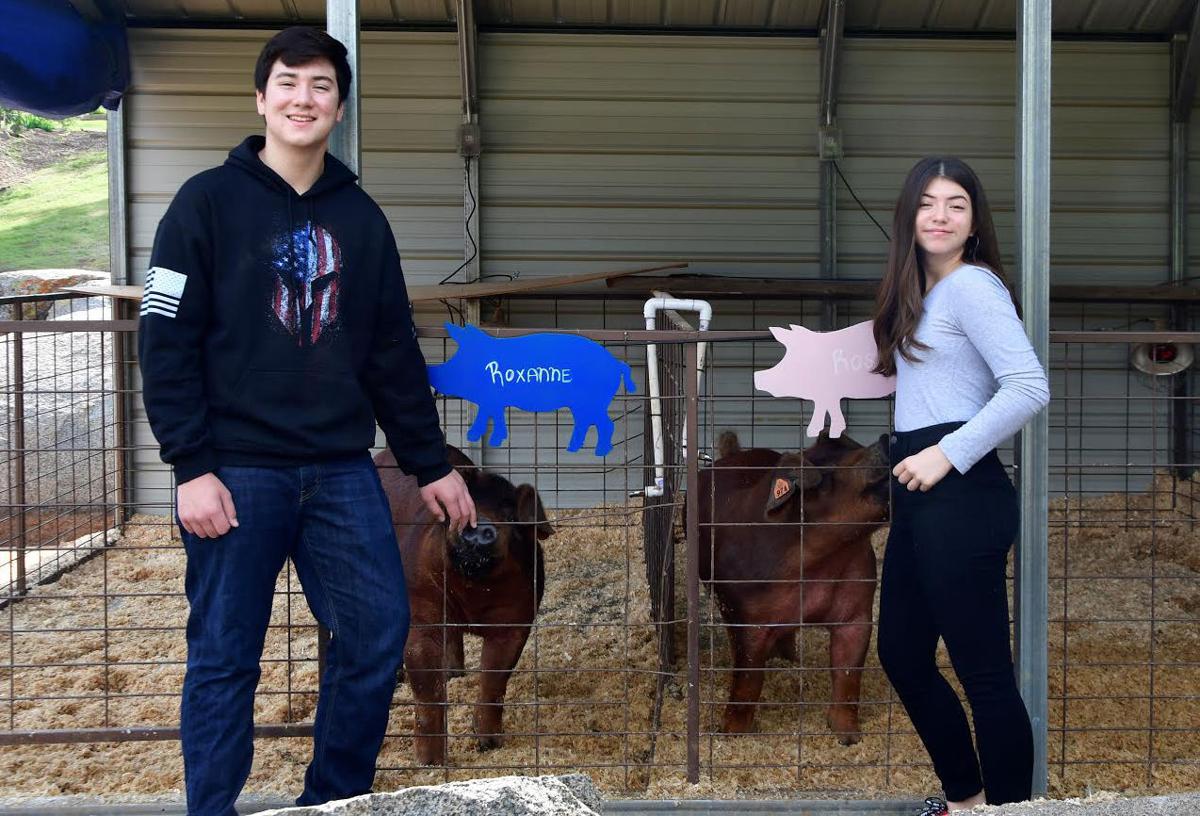 Domenic Cortez, left, poses with his hog Roxanne (#226), alongside his sister, Sofia, and her hog, Rosie (#974) in the hog barn that Domenic and his dad built together last year.

Trinity Avila works with her lamb, Gwen, on showmanship, Tuesday, April 21, 2020, at the Avilas' property. Trinity is a member of Vandalia 4-H.

Tyler Avila works with his hog on showmanship, Tuesday, April 21, 2020, at the Avilas' property. Tyler is a member of Porterville FFA.

Isabelle Miller, right, and her goat, Bubbles (473) and Elijah Miller, back, and his goat Harry Truman (472) finish checking weight, Wednesday, April 22, 2020, at the Millers' property.

Domenic Cortez, left, poses with his hog Roxanne (#226), alongside his sister, Sofia, and her hog, Rosie (#974) in the hog barn that Domenic and his dad built together last year.

EDITOR'S NOTE: All animals listed in this story with tag numbers available for purchase through the Porterville Fair's Save our Sale and Bid for the Kid. Buyers have until 4 p.m. on Friday, May 1, to submit purchase or add-on forms.

But with six animals and busy athletic schedules for both siblings; the brother and sister, their parents and grandparents come together to take care of all the animals, regardless of if they like one species a lot more than the other.

“I’ve always wrestled during this time and I have had to depend a lot on my sister, my mom and my grandparents to get my animals taken care of when I couldn’t because of wrestling,” Tyler said. The Porterville High School senior, who is also a junior fair board member, was one of the top wrestlers in the state this year. He placed seventh at state at 182 pounds and was The Recorder’s 2019-20 Orange Belt Boys Wrestler of the Year.

Once Tyler’s season is done, travel softball begins for Trinity who is with Vandalia 4-H. The eighth grader from Hope Elementary School is a pitcher who can also play first, third or catcher. But with three lambs, she’s also learned to manage her time.

“Raising three lambs is really fun but a lot of work,” she said. “You have to put extra time into raising three lambs because they all have to be fed, walked, worked with and taken care of. It also takes extra help from my family to help me be able to get everything done with them that needs to be done that day.”

Tyler believes he had a great group of hogs this year but unfortunately with no fair, he won’t know just how well they would’ve done. Another thing he said he’ll really miss about not having a fair is being able to spend that time with his sister, mom and grandparents.

“It’s kind of the thing we do,” he said. “Sports is kind of my dad (and I’s time). But my grandma, my grandpa, my mom and sister, this is kind of a family thing. We all help each other out and it’s kind of a bonding experience for all of us and that’s what I’m going to miss.”

When it comes to all their swine and goat projects, the Miller kids know the rules: your animal eats first.

Taking a break from studying Wednesday afternoon, the Miller kids — senior Abigale, sophomore Kaydence, eighth-grader Isabelle and fourth-grader Elijah — wasted no time going into their backyard to feed their animals, check their weights and clean their pens.

Both Abigale and Kaydence are raising hogs, Lumpy (1031) and Miss Kitty (1030), respectively, while Isabelle and Elijah are raising goats, bubbles (473) and Harry Truman (472). Since it’s his first year showing goats for the fair, Isabelle helped Elijah prepare.

“I kind of taught him how to set his goat up and put the halter on, and showed him how to shear his goat,” said Isabelle, who prefers her clean goats to muddy pigs.

Neither Abigale or Kaydence seem to mind the mud with their hogs. Kaydence strokes Miss Kitty with a brush and laughs from deep down when her hog rolls over and gets comfortable on a fresh layer of shavings. Abigale gets down low to make eye contact and talk to Lumpy, who seems to hear and understand her every word.

Abigale used to raise lambs but she knows how temperamental they can be, especially when it's time to show one.

“Everybody starts watching you and if you make a mistake, everybody sees you make a mistake,” Abigale said. “Like my first year, my lamb, he was taller than I was and he kept getting away from me cause I couldn't control him. And everybody was watching. So I had to have someone come out and help me with it.”

One of the most important things the Millers said about raising animals is you have to be kind to them.

“You have to be nice because they kind of choose the mood you’re in,” Isabelle said. Her sister, Kaydence added, “If you’re mean to the animals, they’re mean back.”

The Millers love their animals and it’s quite evident. From the way they sit in their pens and comfort them to Elijah’s after dinner cuddles with the goats to keep them warm. Elijah also said he tries to keep an eye on everyone’s animal from his bedroom window but sometimes he falls asleep.

Domenic, a junior with Monache High School FFA, got his entire family involved in FFA after joining his freshman year when a counselor put him in an agriculture class.

“From my first day of freshman year I knew I was in the right place,” Domenic said via email. “I really enjoy animal science and learning so much about livestock.”

Last year, Domenic and his dad built a hog barn together so Domenic could spend more time with his hog.

“The best thing about raising hogs is watching them grow up and to know that you have done your best to raise them to the end,” Domenic said. “Last year’s hog placed second in market. It is hard to let my hogs go because no matter what, you get so attached to them.”

This year Domenic’s raised a hog named Roxanne (226) who is sweet and well-behaved. Sofia’s hog is Rosie (974), who is the best hog Sofia says she ever had. However Rosie gets into everything so they call her “Nosey Rosie”.

In her first year showing her hog, Sofia said she was “so nervous” and “uncomfortable” in the show ring but was proud to take third in market. The seventh grader from St. Anne’s School won’t get a chance to show Rosie this year but she’s still proud of how far she’s come with her showmanship.

“I was very excited about this year because I felt more comfortable handling my hog,” she said. “Now that our fair is cancelled, I am still working with her every day and look forward to next year.”

And if she needs any more help, she knows her brother Domenic will be there for her.

“I am happy that we get to do this together,” she said. “Even though next year is his last year and I have five more years to go, I bet he will still help me if I need it.”