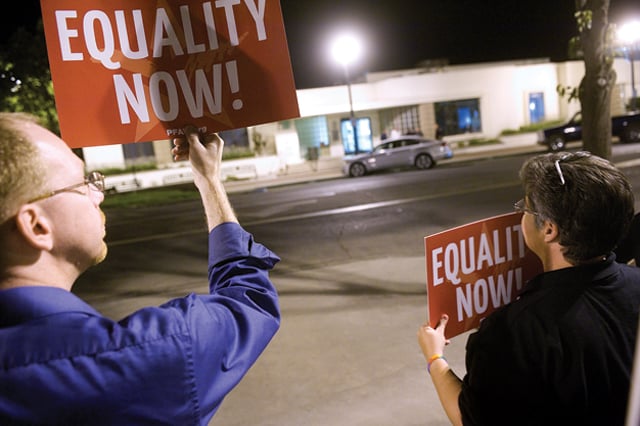 After the vote, a small group of LGBT advocates protests with signs Tuesday, July 16, 2013 at the City Hall in Porterville. Three people were arrested after the vote on adopting council member Brian Ward's good will and charity to all proclamation instead of gay pride month proclamation. 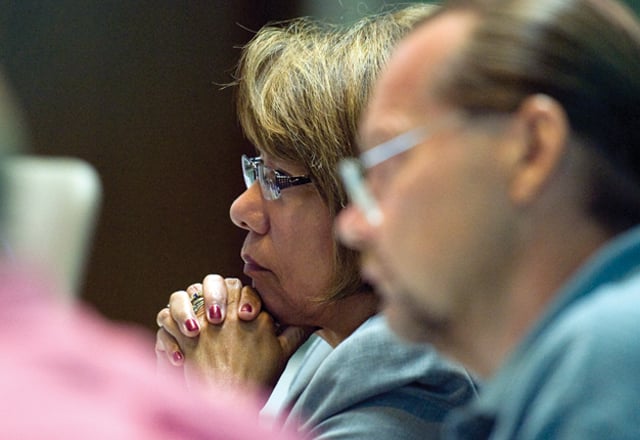 City council members listen to the voices of the concerned citizen over gay pride proclamation made in June Tuesday, July 16, 2013 at the City Hall in Porterville.

After the vote, a small group of LGBT advocates protests with signs Tuesday, July 16, 2013 at the City Hall in Porterville. Three people were arrested after the vote on adopting council member Brian Ward's good will and charity to all proclamation instead of gay pride month proclamation.

City council members listen to the voices of the concerned citizen over gay pride proclamation made in June Tuesday, July 16, 2013 at the City Hall in Porterville.

“You’re not fair! You’re not fair!” was shouted and chanted throughout the Porterville City Council chambers as the decision to rescind the gay pride month proclamation and adopt the good will resolution were debated Tuesday night.

The protesting and disruption rose to the point that Porterville police officers had to escort the protestors out of the chamber, resulting in three arrests.

The debate around the proclamation naming Gay Pride Month for June, signed only by Mayor Virginia Gurrola, has been a heated and sometimes volatile topic that started when the proclamation was presented at the June 4 meeting.

Outrage and shock abounded again when the June 18 city council’s agenda not only requested rescinding the proclamation, but also to adopt a resolution, drafted by council member Brian Ward, suggesting good will to all in Porterville.

Once again the city chamber was filled to over-flowing with citizens — from Porterville as well as others — crowding together to express their views. However, that meeting was only to decide whether the two issues would be discussed and voted on at the July 16 council meeting.

On Tuesday, the council took action on: The process for which proclamations are approved; rescinding the proclamation for June as Gay Pride Month; and adopting a resolution for June as a month of community charity and goodwill to all in Porterville.

“Mayor, you did this for your own agenda. Rescind the proclamation. You’re calling God and the Bible a liar,” exclaimed Trina Leon.

Katherine Hall spoke to the council about the damage this is causing children of the LGBT community. “To hear the religious arguments and then told they [children] are loved is very damaging to them.”

“Let me remind you, Mayor, that you were elected to represent the community as a whole,” Cindy Domiquez stated. “It was your legal obligation to follow the charter. Rescind not based on my beliefs, but because of the legal way it was done.”

The ‘way’ a proclamation was approved was a contention during the citizen’s communication. In the past, proclamations, which are ceremonial and not a legal document, were assigned to the Mayor to sign or not at his or her discretion.

“The procedure is not well-defined,” Dennis Townsend explained. “The proclamation was made on city time, on city paper with the city seal, even though the only member to sign it was the mayor. Because of the language [of the proclamation] and because it has the city seal on it. It needs to be rescinded.”

Maureen Cruz spoke of the confusion of the proclamation and how it would affect Porterville citizens. She had only one thing to say; “When in doubt, leave it out.”

“We’re all equal under the Constitution,” Jessica Mahoney stated during the first set of oral communications. Mahoney was later asked to leave the chamber by the council for interrupting with insults and remarks during the council’s discussion of rescinding the proclamation.

Jesus Garcia of Porterville, the last speaker, pled his case by explaining his experiences growing up a gay boy in Porterville. “It’s frustrating to live here. It hurts to live here. To me it’s [the proclamation] about acknowledging my presence.”

Before the discussion and voting process began, Mayor Gurrola said, “This was only a proclamation of acceptance. I hope from this that we begin to heal. This proclamation was not intended to hurt. There was no intent on my behalf except to accept members of the community.”

One of the biggest bones of contention was the way the proclamation was done — without council approval or input.

“Something happened that no one would have thought and people got hurt,” council member Greg Shelton said, explaining why he wanted the process of having proclamations approved to be reconsidered. “It needs to be fixed. We don’t even go to lunch without getting a consensus from the council.”

A discussion about the history of how proclamations have been approved ensued. “I don’t care about the history,” council member Cameron Hamilton stated. “My problem is that it is the mayor’s proclamation. She was told that it wasn’t approved by the council. She did it anyway. We wouldn’t be here if she hadn’t done that.”

“The mayor is assigned by the council and speaks for the council,” Ward agreed. “It bothers me that she put forth something of her own beliefs.”

“I want to correct you,” the mayor said to Ward. “When I received the proclamation by e-mail, I read it. I didn’t just sign it. When I walked in on Tuesday [June 4] I was astounded at the crowd. I thought Porterville was ready for this.”

“I want to fix it, Virginia, so someone else won’t abuse it,” Shelton said, which brought about another round of debating and arguing from the council.

“I didn’t abuse it,” Gurrola insisted. “I’m the chair here, I’m the mayor, so stop. Stop interrupting me.”

Changing the process of how proclamations are approved was passed with the Mayor and vice mayor Pete McCracken voting against. The new process requires a vote of the council before a proclamation can be given.

A motion to cancel the Gay Pride Month proclamation and the adopt the Goodwill resolution passed with a 3-2 vote; Gurrola and McCracken voting against.

“Is there any room here, Virginia, where you can compromise? Combine the two? Take your proclamation and make it part of Brian’s?” Shelton asked.

Ward did not agree to adding the LGBT community as part of the language in the resolution. “Why does the LGBT get special consideration? Why can’t it apply to everyone?”

A member in the audience shouted out; “Because you hate us!”

Ward continued to explain the reason for his resolution. “There are a lot of kids bullied for a lot of reasons. Everyone and all, includes everyone and all. Everyone deserves love and respect. To me as a councilman, I should be promoting everyone in the community.”

As soon as the vote was done, the chamber broke out into chaos. LGBT members stood with signs, shouting chants and their disapproval.

Police quickly got control of the situation, removing the protestors from the building. Still, even with the protestors removed, the anger and high emotions were evident in the chamber as Gurrola’s husband was calling out to “respect the mayor” while Gurrola’s gavel pounded repeatedly trying to regain order. Some council members lefet the room, and Hamilton and Mr. Gurrola got into a verbal argument. A 15 minute recess calmed the air.

Of those arrested, two were women and one male; they were booked into the Tulare County jail in Visalia. The charges ranged from suspicion of disorderly conduct to disturbing the peace, said Police spokesman Dominic Barteau.

Once the meeting reconvened, the rest of the agenda business was conducted without issue until the end of the meeting when oral communication was open again.

“I really got to hand it to you [to Hamilton]; to combine the two items — it was a powder keg,” Russell Fletcher remarked. “I don’t think the council member should have done what he did. I feel that this will divide the town even more. It amazes me how much damage five people can do in a city of 55,000 people. If you don’t get re-elected, it’s your fault.”

Insults from the LGBT continued. “You’re a selfish little boy and a bully,” Brock Neeley said to Shelton.

“It’s drama,” Hamilton stated about Tuesday night’s meeting, referring to the LGBT and the group’s supposed preparedness for the outcome. “It was planned, it was staged.”

“My hope is that the situation will lead to respect for everyone,” Ward stated Wednesday. “I want everyone to be more kind and tolerant for everyone. I was hoping there would be a compromise.”

Shelton said, “It was unfortunate that we couldn’t come up with a compromise that would address everyone’s concerns.”

Mayor Gurrola and Hamilton were not available for comment Wednesday.