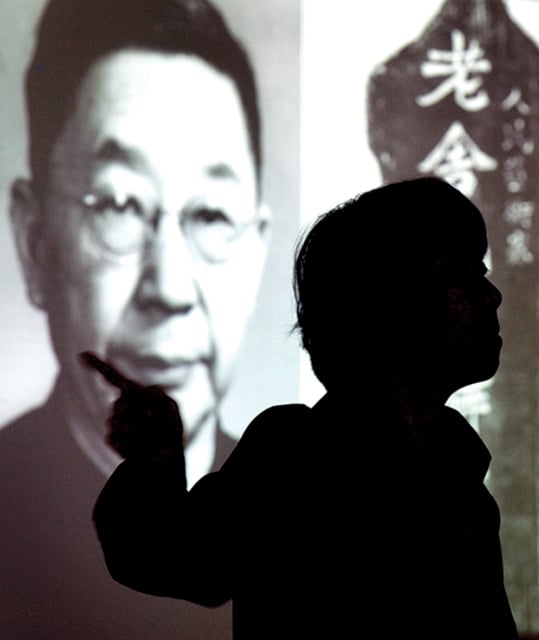 Author Ji-li Jiang speaks about her experiences as a schoolgirl during the Chinese Cultural Revolution in 1966 at Porterville College Wednesday. She points to an image of Lao She, a notable Chinese writer who committed suicide by drowning himself in a Beijing lake in 1966. 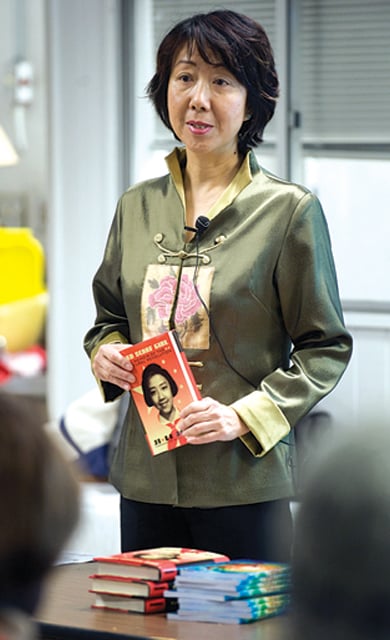 Author Ji-li Jiang speaks to students at Porterville College about her book 'Red Scarf Girl: A Memoir of the Cultural Revolution' Wednesday. 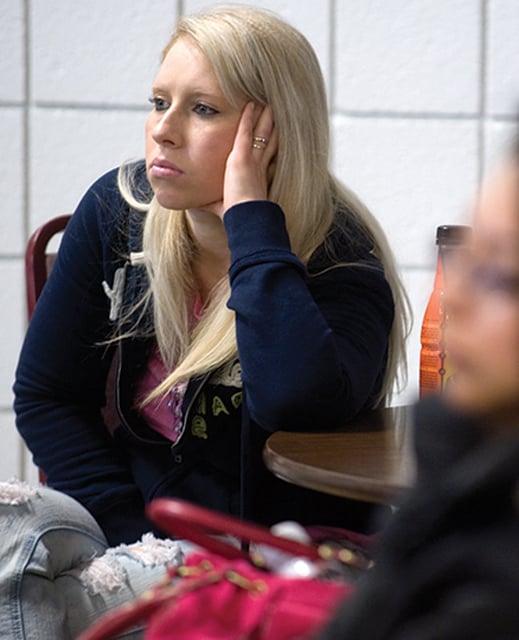 Porterville College student, Kimberly Lyons, and others listen to Author Ji-Li Jiang speak about her experiences as a schoolgirl during the Chinese Cultural Revolution in 1966.

Author Ji-li Jiang speaks about her experiences as a schoolgirl during the Chinese Cultural Revolution in 1966 at Porterville College Wednesday. She points to an image of Lao She, a notable Chinese writer who committed suicide by drowning himself in a Beijing lake in 1966.

Author Ji-li Jiang speaks to students at Porterville College about her book 'Red Scarf Girl: A Memoir of the Cultural Revolution' Wednesday.

Porterville College student, Kimberly Lyons, and others listen to Author Ji-Li Jiang speak about her experiences as a schoolgirl during the Chinese Cultural Revolution in 1966.

Only the sound of her voice could be heard while author Ji-Li Jiang described to her audience the horrors of growing up in China during the Cultural Revolution.

It was a movement in which more than 10 million people died, she said.

Her celebrated novel, “Red Scarf Girl. A Memoir of the Cultural Revolution,” recounts tragedy after unthinkable tragedy as the revolution was born, took hold and resulted in the demoralization of an entire country.

“We were brain washed,” Jiang said. “We believed one day Communism would free two thirds of the world we were told was suffering. We saw no newspapers or outside [media]. We believed what we were told.”

Saving two thirds of the world via Socialism was not to be. Upward of 13 million middle and high school age youth formed the “Red Guard.” So loyal were these children, in the name of Chairman Mao, they maimed, tortured, killed and drove many to suicide. (Mao Zedong led the People’s Republic of China (PRC) from its birth in 1949 until his death in 1976.)

The genesis of the revolution was a program of destruction against the rich and famous. A national ping pong champion when from national hero to accusations of being a spy. He was tortured so horribly he committed suicide. He was 31 years old. He was not alone: Lao She, a playwright considered for a Pulitzer Prize, was released from the hospital and taken by the revolutionist to one of their “Struggle Meetings.”

These meetings, Jiang said, were gatherings for public humiliation of those targeted — including being forced to wear signs on their bodies describing them in the “most demeaning terms possible.”

“The told him to go home, and come back the next day for more torture,” Jiang said. “He was never seen again.”

Her voice trembled, her eyes moistened in the recounting of the story.

That night, she said, She, who was referred to as the Shakespeare of China, went to a lake. He sat by the lake all night. In the morning, he jumped in and committed suicide by drowning. Mao’s Red Book of Poetry was found by his side.

“Of course, no one will ever know what he was thinking while he was there all night, but he had the Red Book of Poetry with him,” Jiang said. “Even in torture and death, people did not blame [Mao], they blamed the people and how they carried out the cultural revolution.”

One woman, who did not understand what was happening, wrote to the government and asked questions. She was imprisoned, her husband forced to divorce her and her 11 year old daughter taken from her.

Jiang’s voice cracked with controlled emotion as she fought back tears describing what happened to the woman:

“They executed her, but the day before she was executed the revolutionists came and cut her vocal cords so she could speak on the way to her execution.”

Jiang’s family became a target because her grandfather was a landowner and had been a rich man. Prior to the revolution, Jiang, 55, was then a bright school girl who reigned at the top of her class. She won awards and was a top speaker among youth. Her future was bright, something her parents worked hard to achieve, considering the date of her birth.

The baby girl was born on Chinese New Year’s day in Shanghai. (Today that progressive metropolis can be compared to 21st century New York City, Jiang said.) Great care was given on what to name her, because the Chinese believe a child born on that day would have a special destiny: “They would be either a king or a begger.”

During her early days, while she was a red scarf girl, it appeared as though she might grow to have a royal kingdom in the form of academic success.

Her father, Xi Kong Jiang, an actor better known in the entertainment world as “Henry O,” was tapped by the revolutionist because his father was a hated landowner — something socialists despised, she said. (Her father played in many American movies with Jackie Chan, including “Rush Hour 3” and others. His latest movie is “2012” in which he played a Tibetan Monk).

The lives of her mother, Ying Chen, a former actress, her brother Ji-yong Jiang, 54, and her sister Ji-yun Jiang, 53, were turned inside out — economically and emotionally.

Her father was “detained” and the family feared they would never see him again.

To humiliate and torture her, the revolutionists came to Ji-Li Jiang’s school and addressed her before the other students. She was told she was to attend a “Struggle Meeting” to denounce her father or suffer the consequences of her disobedience — not future in China.

There, in what would be called in moviedom a “cliff hanger,” Jiang ended the verbalization of her personal story growing up during the Chinese Cultural Revolution. To learn what happen her audience would have to read her book, “Red Scarf Girl. A Memoir of the Cultural Revolution.”

The former science teacher now lives in California. She told her audience why she believed it was important for her to tell her story.

First, she does not want people to forget “the dark period in China.”

“The revolution is more than 30 years past, but if it’s forgotten it could happen again.”

Her second reason hit home with students. She recounted having one public telephone in her town, where thousands of people used the same phone. American children have much by comparison.

“When I first came to America about 20 years ago, I was so impressed with what American children have,“ she said. “The homes, cars, telephones so many modern conveniences. Later, I recognized kids here have as many problems as we had — drugs, coming broken homes with divorced parents, even drive-by shootings, something we had never heard of.

“My second reason for writing the book is so you will have the courage to do your own thinking, use your own heart and make right decisions. When we put someone in power we have the responsibility of making sure they don’t abuse that power.”